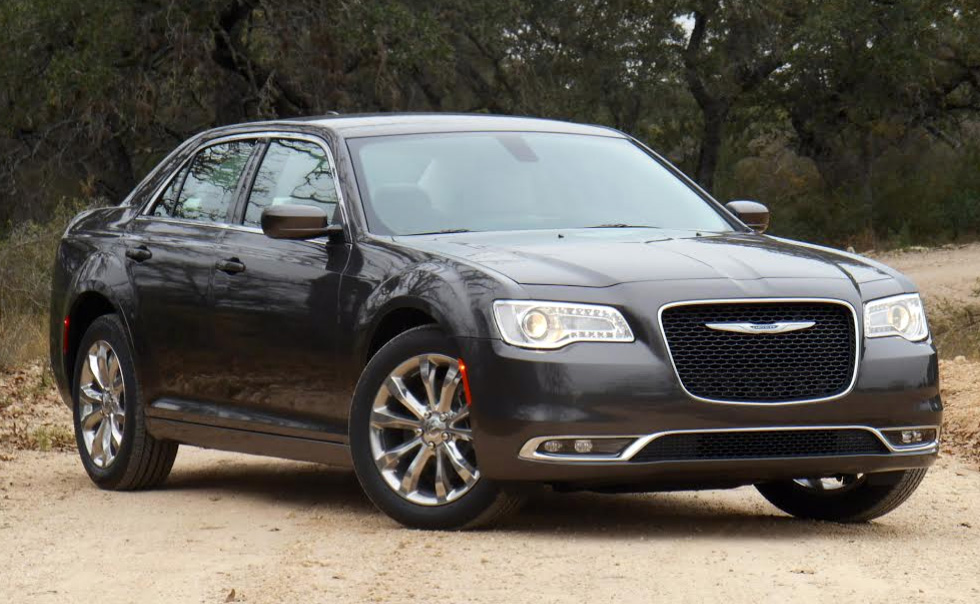 We tested a base 300 Limited, which starts at $32,390 with destination. The main appearance update for 2015 is a larger, bolder grille.

It was 60 years ago now that Chrysler unleashed a performance legend. Introduced for 1955, the big 300 2-door hardtop combined Fifties flash with its namesake 300-horsepower Hemi V8 – by far the most powerful engine offered that year – to become one of the most iconic cars of the decade. Its descendants only served to advance the aura, carrying on the “300” moniker even as horsepower climbed well beyond that figure, signifying their steady advance with letter suffixes. Today, the original 300 and its “letter series” successors (which ran through 1965) are certainly among the most coveted of collectibles.

It was in this spirit that Chrysler revived the 300 for 2005. Although now a more sensible 4-door sedan, it returned the company’s flagship to a rear-drive configuration with available V8 power – itself carrying a resurrection of the famed “Hemi” moniker – though in a sign of the times, all-wheel-drive and a V6 were also offered. And again the 300 made quite a splash. 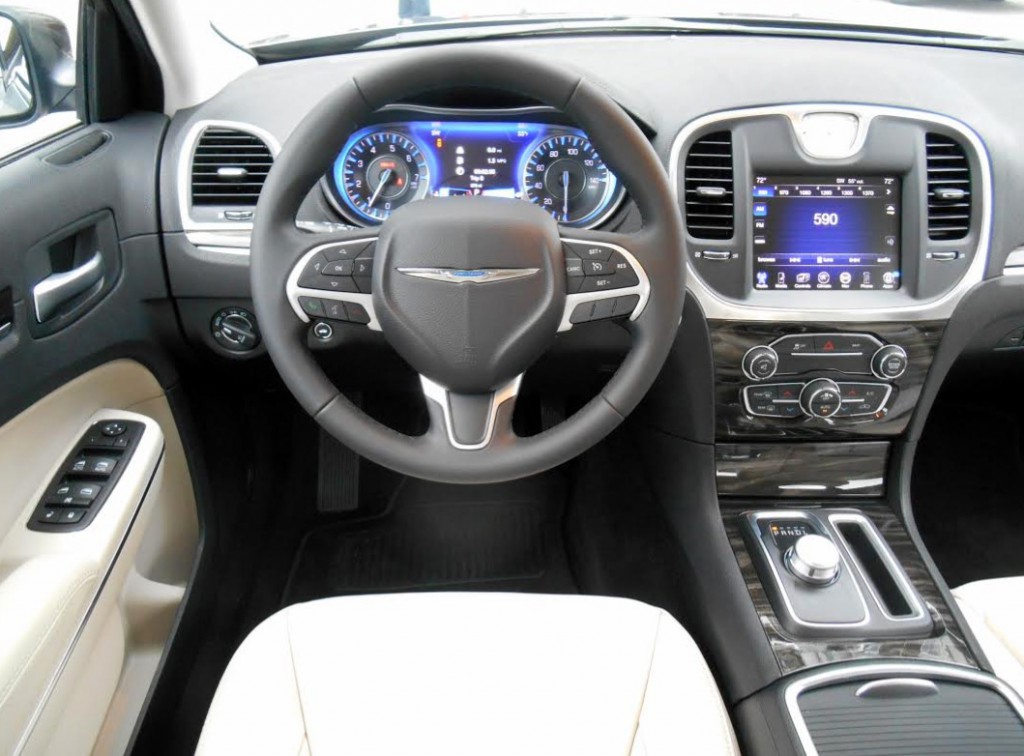 The instrument panel is new for 2015 and includes a central 7-inch Driver Information Display between the speedometer and tachometer. Even the base Limited is available with a two-tone interior, and leather upholstery is standard.

A redesign for 2011 brought the look up to date. The refresh for 2015 further refines the design with a bigger, bolder cross-hatch grille and new taillamps, while also bringing some added safety and tech features.

But there are also a couple of losses. First, all-wheel drive is no longer offered with the V8 (Chrysler says the take rate was too low to justify continuance), and second, the performance-oriented, 470-horsepower SRT8 – which in a way was the true successor to the original high-powered, limited-production 300 – was excised from the lineup. 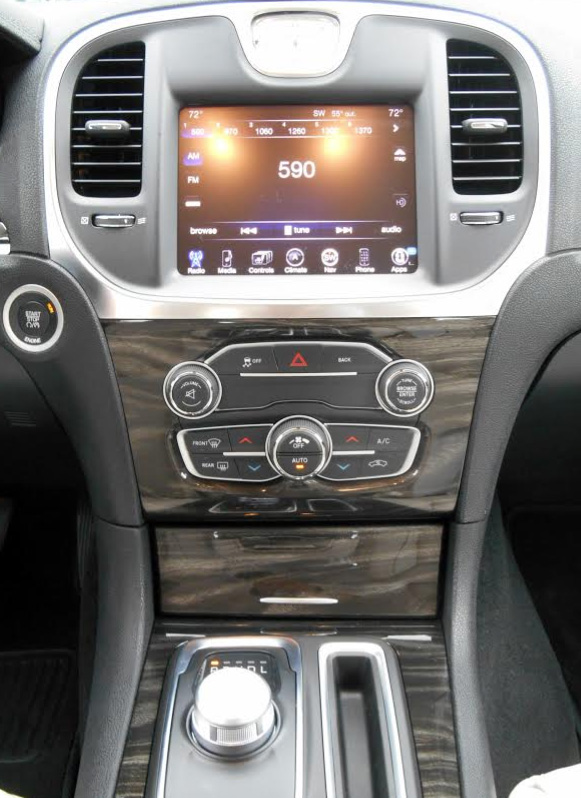 Chrysler’s Uconnect infotainment interface with 8.4-inch touchscreen is standard, and we find it one of the easier such systems to use. Note the rotary shift knob, which replaces a more-traditional gear selector.

Offered as a $3000 option on all but the Limited is a returning 363-horsepower 5.7-liter Hemi. Formerly, it was mated to a 5-speed automatic, but for 2015, it gets the same rotary-knob-shifted 8-speed as the V6. Chrysler says the new transmission drops the 0-60 mph time from 6.0 seconds to 5.8, and improves fuel economy by 6 percent, which now comes in at 16 city/25 highway.

Several safety features have been upgraded for 2015. Forward Collision Warning adds the ability to slow the vehicle to a stop if an imminent collision is sensed. Adaptive cruise control also can now slow the vehicle to a stop, and will automatically start it moving again if the car in front pulls away within 2 seconds; otherwise, the driver has to hit the gas pedal. Lane Departure Warning adds Lane Keep Assist, which will “nudge” the car back into its lane via steering-wheel inputs.

Inside, there’s a new instrument panel with the circular speedometer and tachometer separated by a 7-inch screen that can be customized to display different information such as a trip computer, digital speedometer, and – with optional navigation – upcoming turns, all bathed in a blue halo of light. Padded surfaces abound, and the new Platinum model is dressed with Poltrona Frau leather on the dash, quilted Napa leather on the seats, and hand-sanded matte wood trim throughout. Also new are a number of two-tone interior color combinations, which – depending on model – include black and Ambassador Blue, black and Linen (sand color), and Indigo (dark blue) and Linen. On the more practical side, Chrysler’s Uconnect infotainment system with 8.4-inch screen is standard, and newly added available features include streaming internet radio, 3-D navigation image, voice texting, and in-car WiFi. Also new is Uconnect Access, which makes available a roadside-assistance system, along with the ability to lock or unlock the doors or start the engine using an app through their computer or smart phone. Also, a dual-pane panoramic sunroof is newly optional. 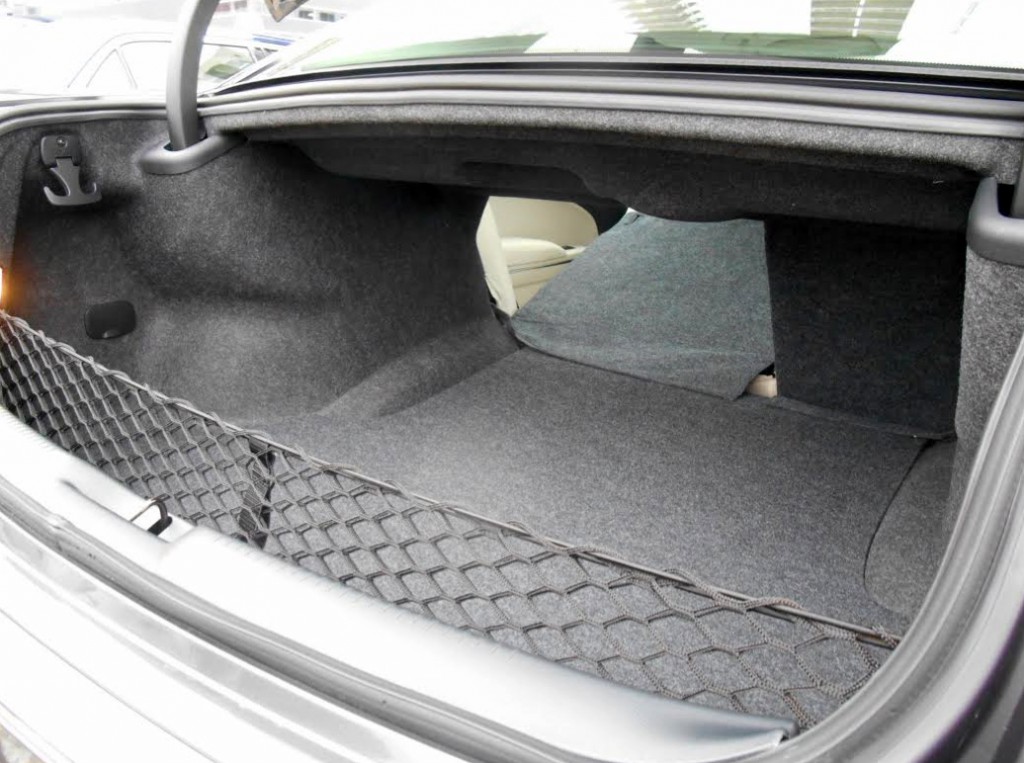 The rear seat backs fold to expand the cargo area. They don’t lie quite flat, but a “ramp” allows a smooth transition from the cargo floor.

On our Austin, Texas, preview of the 300, we only had an opportunity to drive a rear-drive Limited. But even this base model boasted an impressive two-tone interior (leather upholstery and heated front seats are standard) fitted with padded dash and door tops along with dark wood and silver trim. As before, there’s plenty of adult room both front and rear, though the rear seat area isn’t as roomy as might be expected of a full-size sedan. Also, the 300’s signature low-roof/high sill design doesn’t leave as much airy window height as in most cars.

For storage, there’s a moderate-size glovebox; smallish 2-tiered console box with 12-volt, SD card, USB, and Aux jacks; two covered cupholders; a covered forward console bin with another 12-volt plug; and small door map pockets with cupholders. Of particular note are the covered console bin and cup holders, which provide a more “finished” look than if they were just open.

The trunk is usably large, and can be expanded by folding the rear seat backs. However, the seat backs don’t lie flat, though a “ramp” leaves them level enough with the cargo floor to allow longer items to be easily slid forward.

Although one of the selling points of the 300 is its available Hemi V8, most buyers would probably find the V6 in our tester to provide perfectly adequate acceleration. Stab the throttle, and the car gets a decent jump off the line and pulls well thereafter, with the engine emitting just a rich, muted whine. Do the same from speed, and the 8-speed automatic usually kicks down fairly quickly for more power, though we noted it sometimes hesitated a bit first. We did get a brief drive in a V8 model – which provides greater additional punch than the 71-horsepower difference would imply – but it had started to rain by then, and the wet roads didn’t provide the traction needed to put all that power to the ground at low speeds. Which is exactly why we bemoan the loss of the V8/all-wheel drive combo. 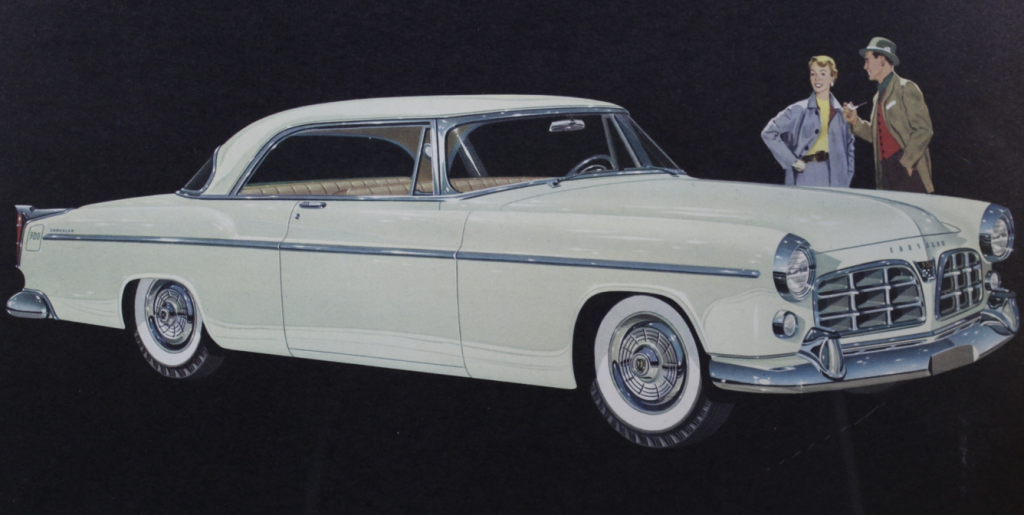 Although Austin doesn’t suffer the kind of potholed thoroughfares that surround our Chicagoland office – and thus doesn’t make for the best test of bump absorption – the Limited was quite composed over every road irregularity we hit. Even though it has no sporting pretense (which is left to the S and, to a lesser extent, C models), it never felt floaty, and handled twisty roads (which the Austin environs do have) with aplomb. Steering “weight” can be adjusted between normal, comfort, and sport settings, and while the first two were light but fine around town, the car felt more composed winding through the twisties in “sport.”

In its various forms, Chrysler’s 300 is somewhat more European in flavor than many other full-size sedans, at least in part because it’s based on a rear-drive platform with available all-wheel drive and offers one of the segment’s few V8 engines. Furthermore, it’s also quite stately inside as opposed to the more “expressive” approach taken by some competitors.

And if you look back to 1955, that’s not a far stretch from what the original 300 provided: surprising power in a large, stately luxury car. While the current 300 may not go on to become the classic that first one is, it certainly manages to stand apart from the traditional full-size crowd.