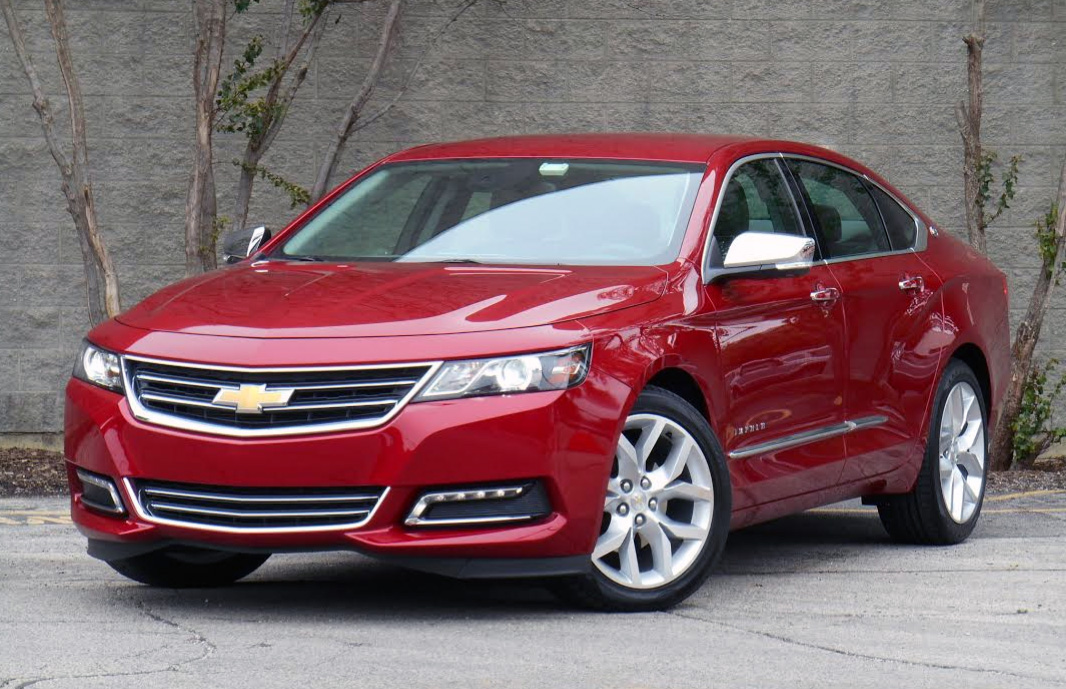 The not so good: Middling fuel economy

While the Impala wears one of the oldest model names currently in use (dating from 1958), today’s version is a thoroughly modern device. Also a thoroughly enjoyable one.

As has been the case since its inception, Impala is a roomy, full-size family sedan. In this latest iteration, a 195-horsepower 2.5-liter 4-cylinder engine is standard, but our test car was fitted with the available (and perhaps more appropriate) 305-horsepower 3.6-liter V6. Also offered for 2015 is a version of the 3.6 that will run on gasoline or compressed natural gas – a combo that’s currently an industry exclusive – though it’s primarily aimed at fleets that have access to CNG. All engines mate to a 6-speed automatic transmission.

While Impala starts at about $28,000 including destination in LS trim, our tester was a top-line 2LZ that started at just over $36,000, and it ended up – with a few options – at $38,690. That may seem like a bunch for a “Chevy,” but this was for a large car that included a host of equipment that not too long ago would have only been available on premium nameplates. This includes keyless access and starting, remote engine start, heated and ventilated front seats with power lumbar (both driver and passenger), memory driver seat, heated steering wheel, navigation system, Chevrolet’s MyLink infotainment interface, and the ability to use the car as a 4G LTE Wi-Fi hotspot. On the safety side, there were heated mirrors, a rearview camera, rear-obstacle detection, forward collision alert, rear cross-traffic alert, blind-spot monitor, and GM’s OnStar assistance system. 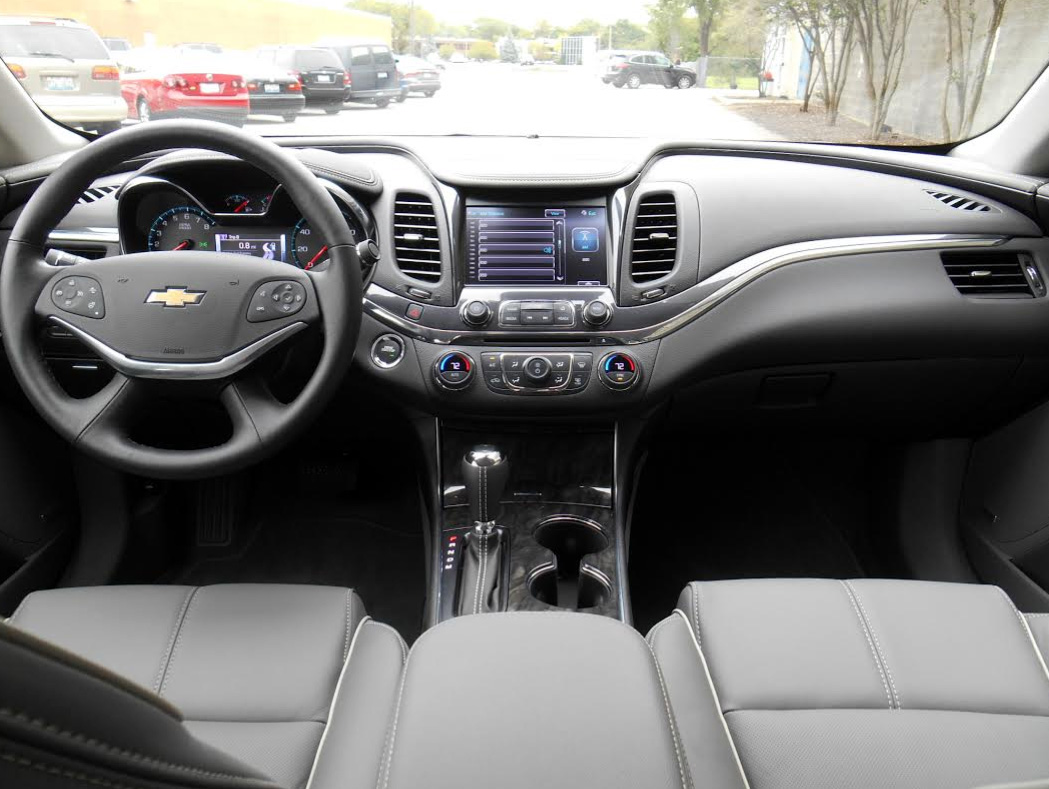 Handy controls and ample storage space are hallmarks of the Impala cabin.

As might be expected, the Impala offers plenty of space inside for four full-size passengers, and a third person can be fairly comfortably accommodated in the rear seat. There’s also a good amount of trunk space that includes a wide channel at the rear. Yet while the rear seat backs fold to expand the cargo area, doing so leaves a “step” that’s high enough that long items can’t be easily slid all the way forward; the leading edge has to be “picked up” to clear the hump. Cabin storage is quite impressive, and includes a modest-sized glovebox, a forward console bin, two open cupholders, a small rear console bin, a large 2-tiered console box, a good-size left-side dash bin, and door map pockets with cupholders.

From the driver seat, visibility is fairly good to the front corners, but the side roof pillars are wide enough to block much of your over-the-shoulder view. Rear-quarter windows allow good visibility to the rear corners.

All audio and climate controls are easily accessible. The audio system includes rotary tuning and volume knobs, with band and station selections done through the 8-inch touchscreen. Some on-screen adjustments were a bit cumbersome, and the voice recognition was rather slow to react. There were no such complaints with the climate controls, which were unusually handy to use thanks to rotary temperature and fan-speed knobs along with individual mode buttons.

Check out our large-car Best Buys

Although some may find the interior styling a bit “adventurous,” the swoopy contours are at least covered with nice materials, as the face and top of the dash are padded, as are the door tops. Nevertheless, the ambiance was a ways from “posh,” as our tester wore a rather bland-looking grey-on-grey color scheme highlighted with some wood and bright-metal accents; undoubtedly, a more contrasting two-tone scheme would have looked richer.

On the road, the Impala impressed. Power was plentiful, and the transmission kicked down quickly when the throttle was stabbed at speed. In this era of low-profile tires, few cars ride as well, yet handling is sporty enough to keep the big car from feeling cumbersome.

If the “Impala” name makes you think of your childhood family car, be aware that today’s version may fulfill the same need, but in a way that’s decidedly up to date. Overall, it strikes me as one big car that’s worth the bucks.

Consumer Guide recently tested a Buick LaCrosse, a vehicle we deeply respect for its quietness, ride comfort, and overall sense of quality and refinement. That test car, loaded with virtually every available option including AWD, listed for just over $50,000. 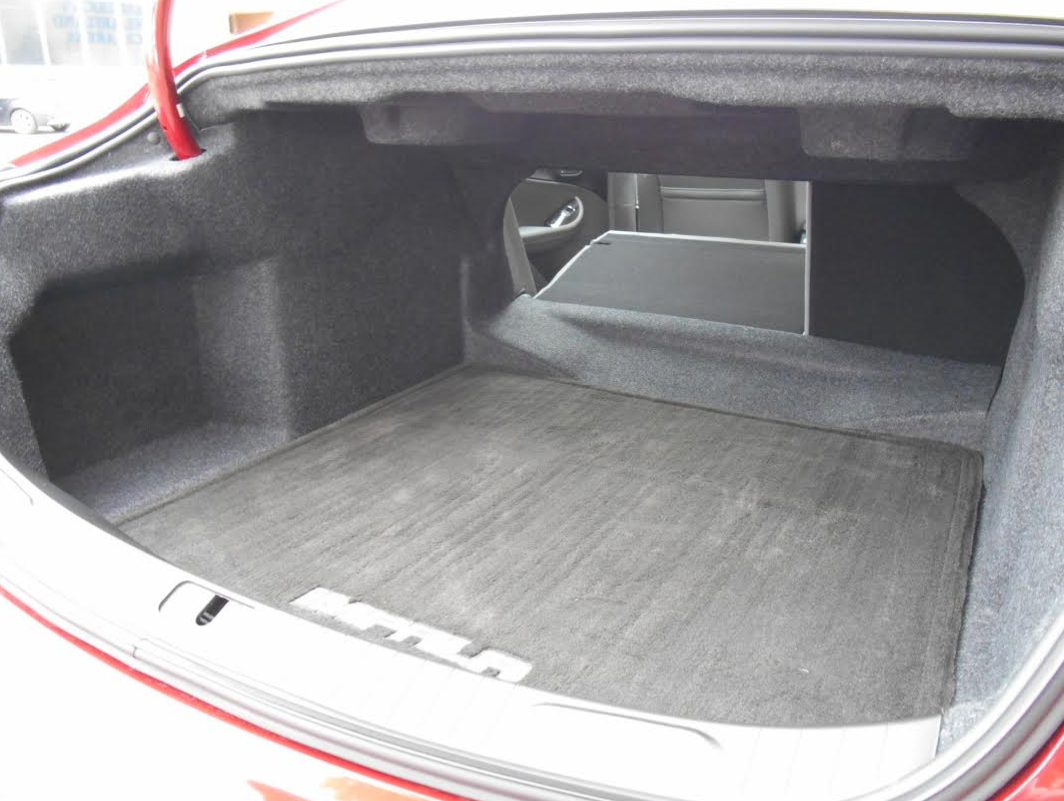 I mention the Buick because the Chevrolet Impala is a close architectural relative, sharing body structure, most engine and transmission options, and lots of under-the-skin stuff you and I don’t see.

True, the Impala does play a bit down market of the LaCrosse, enjoying a slightly less luxurious cabin, and reportedly less sound-deadening attention, but it does cost less. A lot less, actually. At about $39,000 very well equipped, our test Impala is either a pricey full-size car, or one heck of a luxury bargain. I would argue for the latter.

If we allow $2000 for the AWD, which is not available on the Impala, the Buick still comes in about $9000 more than our decked-out test car. My point? If the LaCrosse is strong entry-luxury value, the Impala is a screaming good deal as an upscale family sedan. It’s worth noting that a decent Impala can be had for well under $35,000 for those looking for all the space but fewer of the frills.

Impala has become a quiet success for Chevrolet. Though sales are down somewhat this year, through September, Impala outsold the Ford Taurus and Toyota Avalon, combined. Meanwhile the Hyundai Azera and Kia Cadenza, both large front-drive sedans like Impala, have hardly clicked with the public, combining for less than 5-percent of the market.

In terms of large-car sales, the best man has won. Impala can claim nearly perfect scores for passenger space and comfort, and makes a strong showing in drivability as well.

The 3.6-liter V6 pairs especially well with GM’s popular 6-speed automatic, providing plenty of passing and merging oomph, as well as excellent off-the-line punch. And while no sports car, this big sedan handles surprisingly well, especially given the ride quality.

Shoppers stepping to Impala from a midsize sedan will find the one thing that they’re looking for in abundance, and that’s space. Impala lives up to the large-car label, proving space for four large adults to ride in absolute comfort. Five folks will fit fairly well, providing one of the rear-seat occupants isn’t an adult. Cars, even large cars, just aren’t that wide anymore.

For the crossover averse looking for an old-school family car, Impala is a must see. The way I see it, this car’s only real flaw is the lack of AWD availability, a problem that I suspect will be addressed soon.