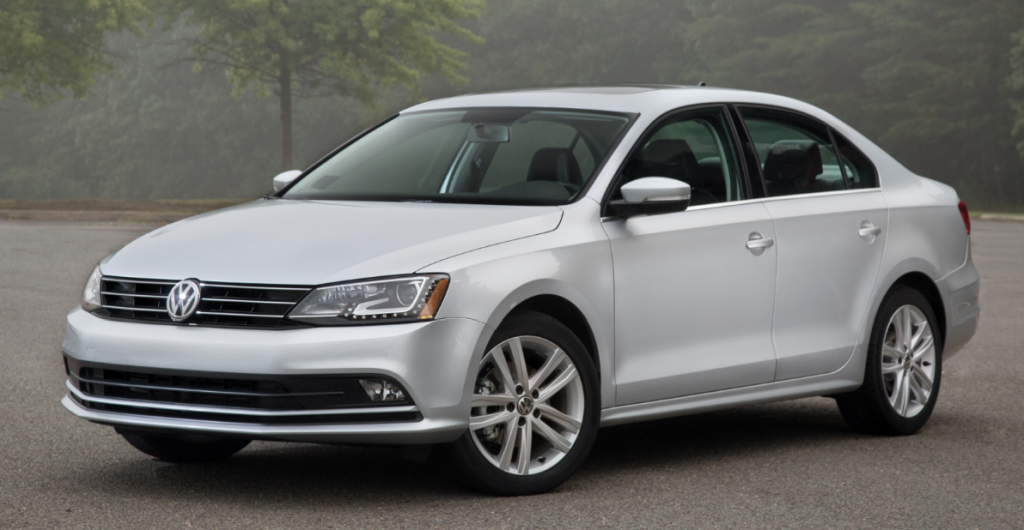 The not so good: Steering lacks expected German-car road feel

The evolution of the Volkswagen Jetta, the German automaker’s roomy and efficient—if somewhat unexciting—compact sedan, progresses for 2015 with new exterior styling and added features. This comes on the heels of a new base gas engine and rear suspension that arrived for ’14.

Consumer Guide®’s test model was a 2015 with the 2.0-liter turbocharged diesel 4-cylinder engine that delivers exceptional fuel economy. It was kitted out in midlevel SE with Connectivity trim that brings an increased level of comforts and conveniences to go with that slow-to-retreat fuel gauge. 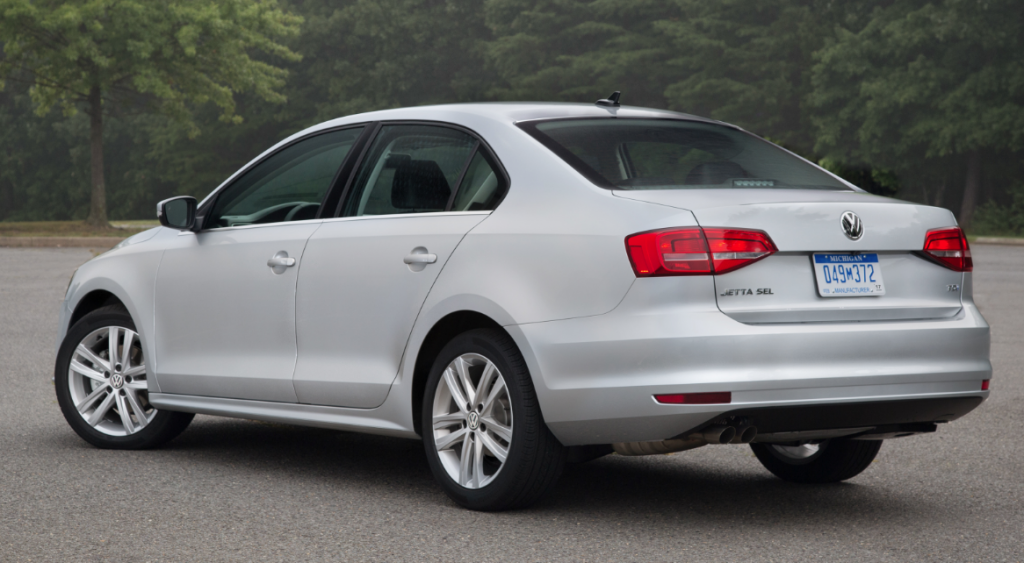 The 2015 Jetta enjoys a number of styling tweaks, all of which are best described as subtle.

After sitting on a cool night, the TDI engine needed just a few moments to be ready to start. It’s a very little noisier at start and idle than a gas engine, and while power is not overwhelming—150 horsepower—the diesel has more linear pull from a standing start than the gas engine, which seems to need the accelerator pressed down a ways before rousing itself to life. Like many diesels, torque is actually the Jetta’s calling card. Our test car was equipped with a DSG double-clutch 6-speed automatic transmission (a 6-speed manual is available). Automatic shifts are hard to miss. They’re quiet, but sharply defined, which some drivers might find abrupt. Kickdown was generally well timed for fine highway acceleration.

The TDI’s true reward is at the pump. In our time with the car, it outperformed the EPA-estimated combined mileage figure of 36 mpg. (City/highway figures are 31 and 45, respectively.) This driver had two turns in it, the first being an 88.3-mile trip with 60-percent city-style driving that worked out to 36.59 mpg. The second stint covered 164.8 miles, with 63 percent city, but came in at an eminently likeable 41.55 mpg.

2014 Volkswagen Passat: A Weekend in a Sophisticated, Segment-Busting Sedan

Volkswagen doesn’t make ride suffer to benefit handling and vice versa. Unfortunately, neither does it make either element truly outstanding. The speed-sensitive electric power steering could feel more engaged with the road. 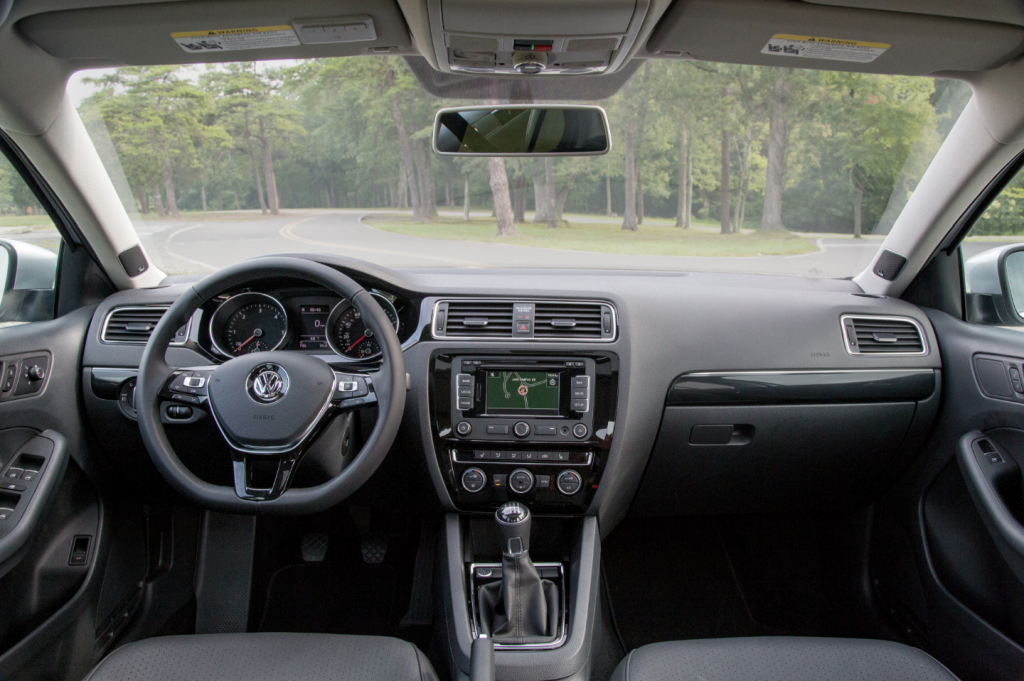 CG’s test car had a Titan Black interior that could have been fairly bland, but instead came off with a modicum of sophistication that’s new to the Jetta. Brushed metal on the doors and dash, plus piano black around the instruments and shifter were nice touches. The only leather inside our tester was reserved for the wrapping on the steering wheel and shifter knob. Leatherette covered the seats, but it seemed a little softer and better textured than in Jettas of recent vintage. The steering wheel, by the way, was a flat-bottomed sport-style unit. There’s a welcome new sponginess to the covering atop the dash—even if the message still hasn’t gotten out the hard-plastic door surfaces.

Otherwise, the TDI that CG drove maintained laudable Jetta traits like its roomy back seat and ample trunk for the class. Rear seats fold 60/40, but not flat, with a couple inches of offset. There is a ski pass-through in middle of back seat.

Controls are still straight-forward and easy to use. Audio presets are saved on the central screen but initially summoned with a rotating station selector knob. For climate controls, rotating dials still permit quick, direct selection of desired temperature, fan speed, and vent-mode settings.

Interior storage spaces continue to consist of a commendably large glove box, 2 open cup holders in the console, a covered console box under a padded arm rest, and door pockets—albeit without the bottle holders that regularly appear in so many other cars these days. Rear passengers are accommodated with pouches on the backs of the front seats, door pockets, small open cubbies in the back of the console, and a pull-down center arm rest with 2 cup holders. 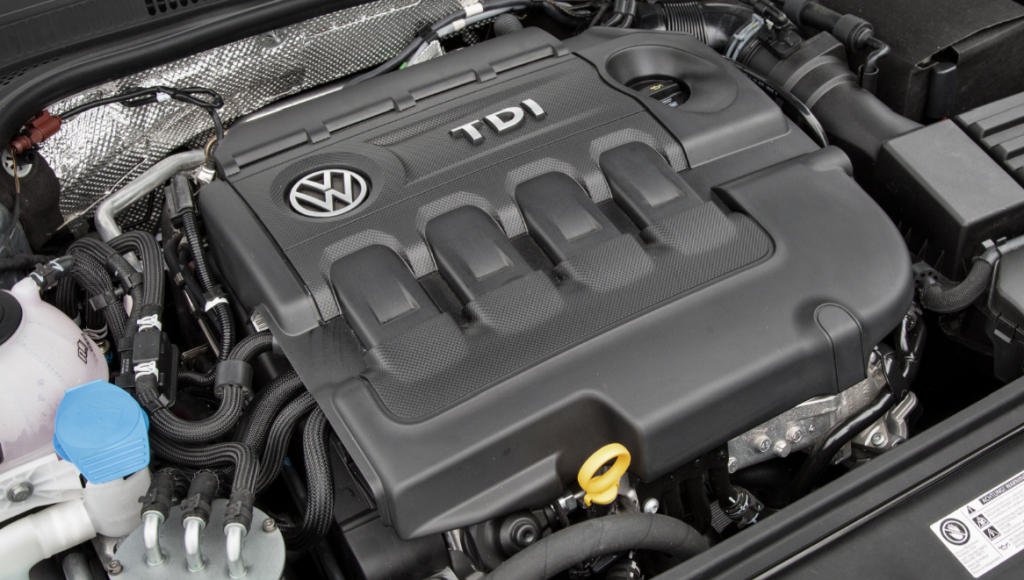 Our test car—with nary an option on it—came to $25,995 with delivery. Aside from the stingy but torquey TDI engine and the other features already mentioned, it was outfitted with a power tilting/sliding sunroof, 16-inch alloy wheels and all-season tires, 4-wheel disc brakes, a rearview camera, Media Device Interface with iPod cable, Bluetooth connectivity, HD and satellite radio, push-button starting, air conditioning, heated front seats, an 8-way manually adjustable driver’s seat with lumbar support, 6-way manually adjustable front passenger seat, tilt and telescoping steering column, and illuminated visor mirrors. Considering that Volkswagen has chipped away at some of the Jetta’s shortcomings while preserving its most admirable qualities, that seems more worthwhile than ever.