2014 Volkswagen Passat: A Week in a Sophisticated, Segment-Busting Sedan 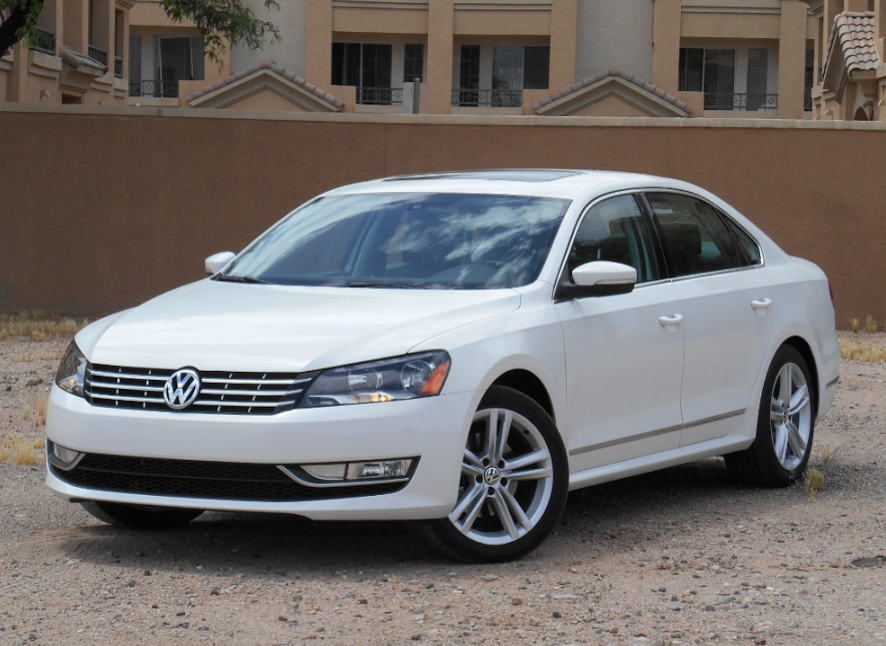 Although classified as a midsize sedan, Volkswagen’s Passat is as spacious as some full-size ones. Our very well equipped SEL Premium test car came to $31,715 including destination, but base models start at about $23,000.

In the hotly contested midsize-sedan market, Volkswagen’s Passat is an also-ran. Compared to the 408,000 unit sales of the Toyota Camry and 367,000 of the Honda Accord, Passat’s 110,000 barely makes a blip.

But that’s hardly the car’s fault. In truth, the Passat straddles the size line between midsize and full size sedans, offering more overall interior and cargo space than midsize rivals while casting a smaller shadow than most full-sizers. Furthermore, the Passat – like many other Volkswagens – also straddles the line between “regular” and “premium” vehicles, particularly in terms of interior dressing. Perhaps these contradictions to the popular perception that Volkswagens are supposed to be small and cheap crosses people up. After getting in a looking around, one passenger said incredulously, “This is a Volkswagen?!?” 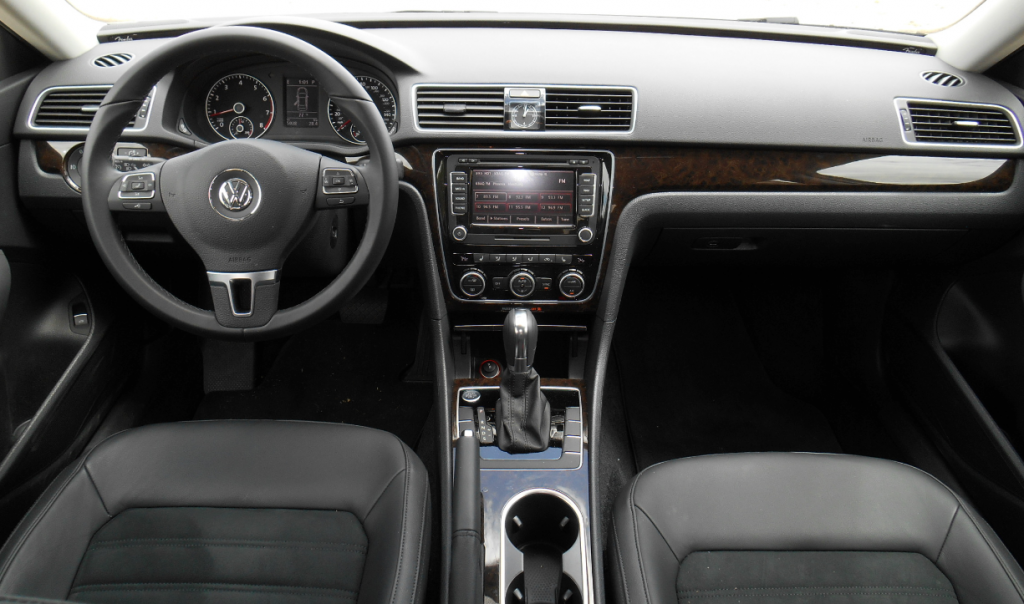 No swoopy slashes or “techy” touches here; the Passat’s dashboard is a study in stateliness.

Compared to the current crop of midsize cars, the Passat projects a much more conservative, stately image. Outside, there are no sweeping creases of tortured sheetmetal, no gaping-mouth grille, and the interior is equally subdued, with a simple, straight-line design theme. Materials are a step above the norm, with a deeply padded dash, padded door tops, and rich-looking trim that includes stretches of wood and matte-finished silver accents. Overall, the Passat trades “trendy” for “mature,” which may be in conflict with the traditional Volkswagen clientele. But I rather like it.

Hot in China: Best-Selling Cars More Familiar Than You Think

It also bucks the current trend toward confounding control complexity – another “feature” I really admire. There are honest-to-goodness buttons and knobs to control most audio and climate functions, with the dashboard screen hosting some “virtual” buttons where they’re most useful – such as in identifying radio stations. They’re also all very easy to reach.

Further deviating from current practice is visibility, which is wholly a good thing. Thin front pillars and relatively modest side pillars join with slender “dual post” rear pillars for an usually great view out.

Mentioned earlier was Passat’s impressive-for-the-class cargo space, and that applies to trunk room as well as interior storage. The trunk is wide at the back and goes far forward, and while – oddly – there’s no molded bin under the cargo floor, there is some “impromptu” space around the spare tire to stash stuff. The only downside is the sickle-shaped trunklid hinges, which dip into the cargo area when the lid is closed. Furthermore, the rear seat backs fold level with the cargo floor and nearly flat, and there’s a large pass-through opening, so it’s easy to slide in large objects. There’s also a ski pass-through in the seat back.

For 2014, Passat trades its formerly standard 170-horsepower 2.5-liter five-cylinder engine for a 170-horsepower 1.8-liter turbocharged four. On paper, that seems like an even – though somewhat confusing – trade, but the new engine is rated higher by the EPA, its 24 city/34 highway figures being up by 2 and 3 mpg, respectively. However, that increase didn’t seem to be reflected in this week-long, 150-mile test. In slightly more city than highway driving, we averaged 22.44 mpg on the recommended regular-grade fuel. By contrast, about an even mix of city/highway driving in an extended-use 2013 model with the 2.5 netted an average of 25.7 mpg. The 2.5 also provided more linear power delivery. On takeoff, it takes the 1.8 turbo a moment to collect itself, and then the power comes in – sometimes more than you bargained for. Ditto in low-speed acceleration during the cut-and-thrust of city driving. This is a general complaint with turbocharged engines, which have become the currently trendy way to eek out a few more miles per gallon – at least on the EPA cycle. In terms of overall power and acceleration, the 1.8 turbo actually felt a bit stronger than the 2.5, both being perfectly adequate for normal driving. While the 2.5 has departed for 2014, Passat is also offered with a thrifty 2.0-liter turbodiesel and a potent 280-horsepower 3.6-liter V6. 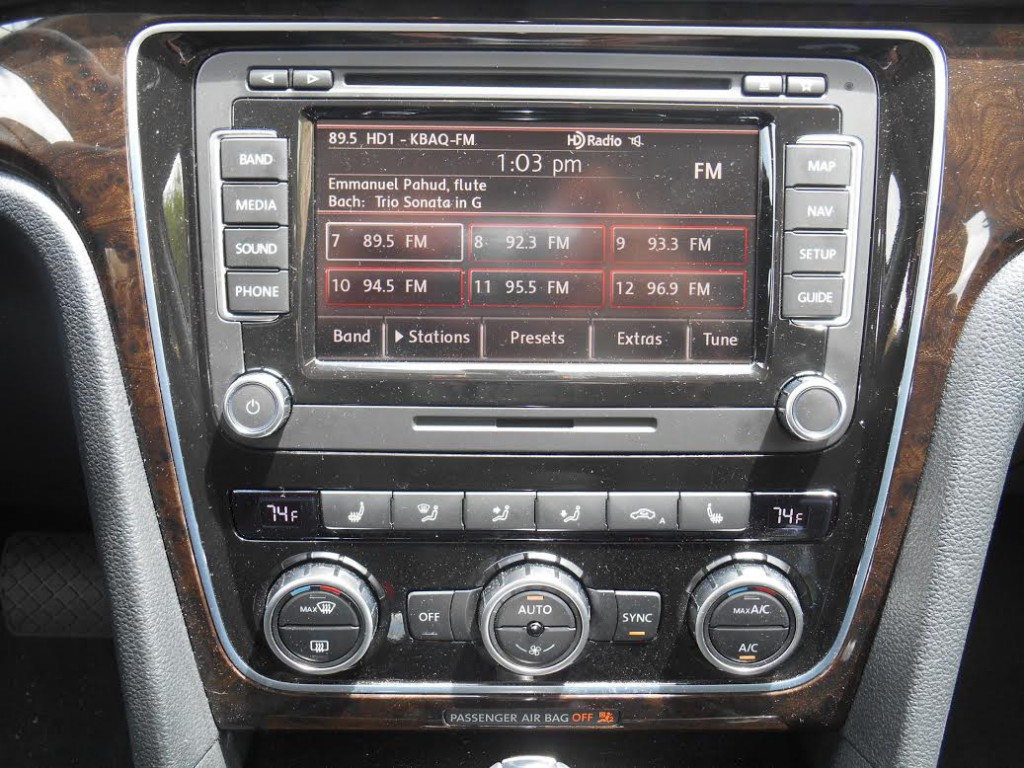 A nice combination of knobs, buttons, and screen graphics make for unusually simple and clear audio adjustments. Ditto for the climate controls.

Although Passat looks the part of a luxury cruiser, it doesn’t quite ride like one. In the European tradition, it’s a bit firm over pavement imperfections, but that comes through as being more “solid” than “harsh” – which isn’t always the case – in part because there’s just a muted thud over bumps. The suspension also provides a stable ride and gives the Passat a slightly more sporting, nimble feel than one might expect in a relatively large sedan.

There’s an exceptional amount of headroom and particularly legroom in front, and those in back should find ample amounts of both – even behind a tall driver – along with easy entry and exit. In fact, the Passat would seem to make a rather fine limousine. 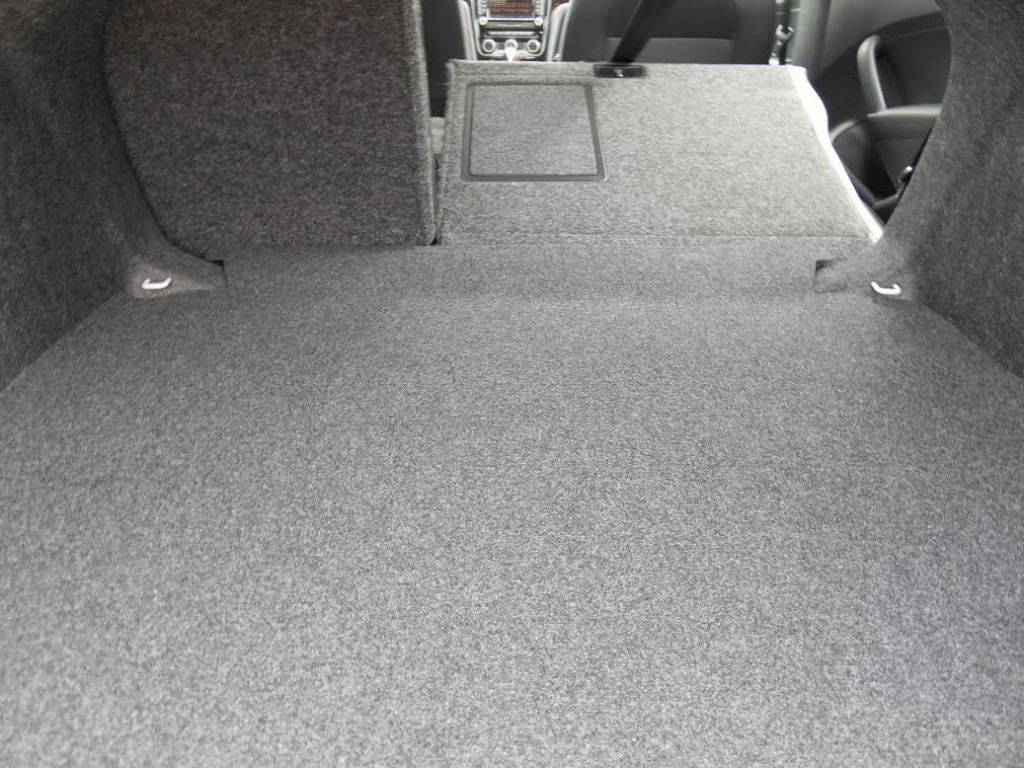 It’s difficult to tell from this photo, but the Passat’s trunk is huge, and the folded rear seat backs rest level with the load floor to create a long, easy-to-load cargo area.

Despite its size and somewhat upscale ambiance, the Passat is priced on par with most other midsize sedans. The base S model starts at $22,915 including destination, and that includes automatic transmission, power mirrors/windows/remote locks, Bluetooth cell-phone link, and a host of other features, so this is hardly a stripped car. The tested SEL Premium listed for just under $32,000 and added such niceties as woodgrain interior trim, leather upholstery, heated front seats, sunroof, navigation system, and rearview camera.

In overall sales, midsize sedans make up the largest single segment of the automotive spectrum. Of the 18 class contenders, Passat usually ranks about mid-pack in terms of volume. That’s a bit surprising to us, as it seems far above average in terms of value.