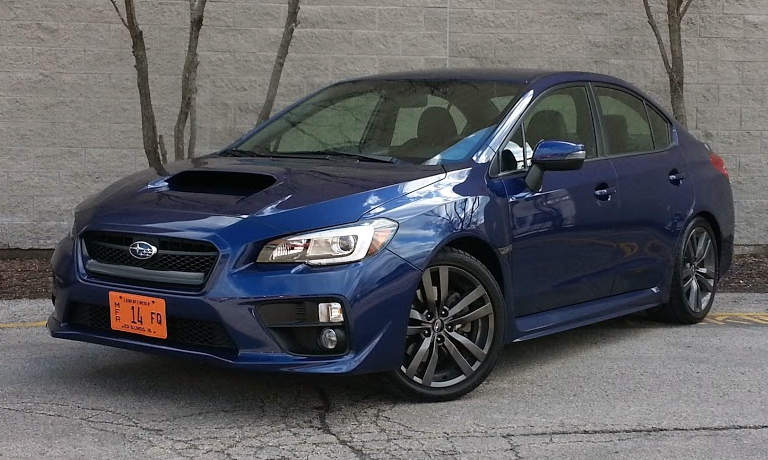 The not so good: Ride quality

Having redone its WRX high-performance sedan (and the Impreza compact on which it is based) for 2015, Subaru would appear to be resting on its laurels in 2016. It gets to—it’s impossible for automakers to make all their products all new every year. General changes to the latest WRXs like the Limited version that Consumer Guide® editors tested include an upgraded infotainment control screen and some added available electronic safety monitors. 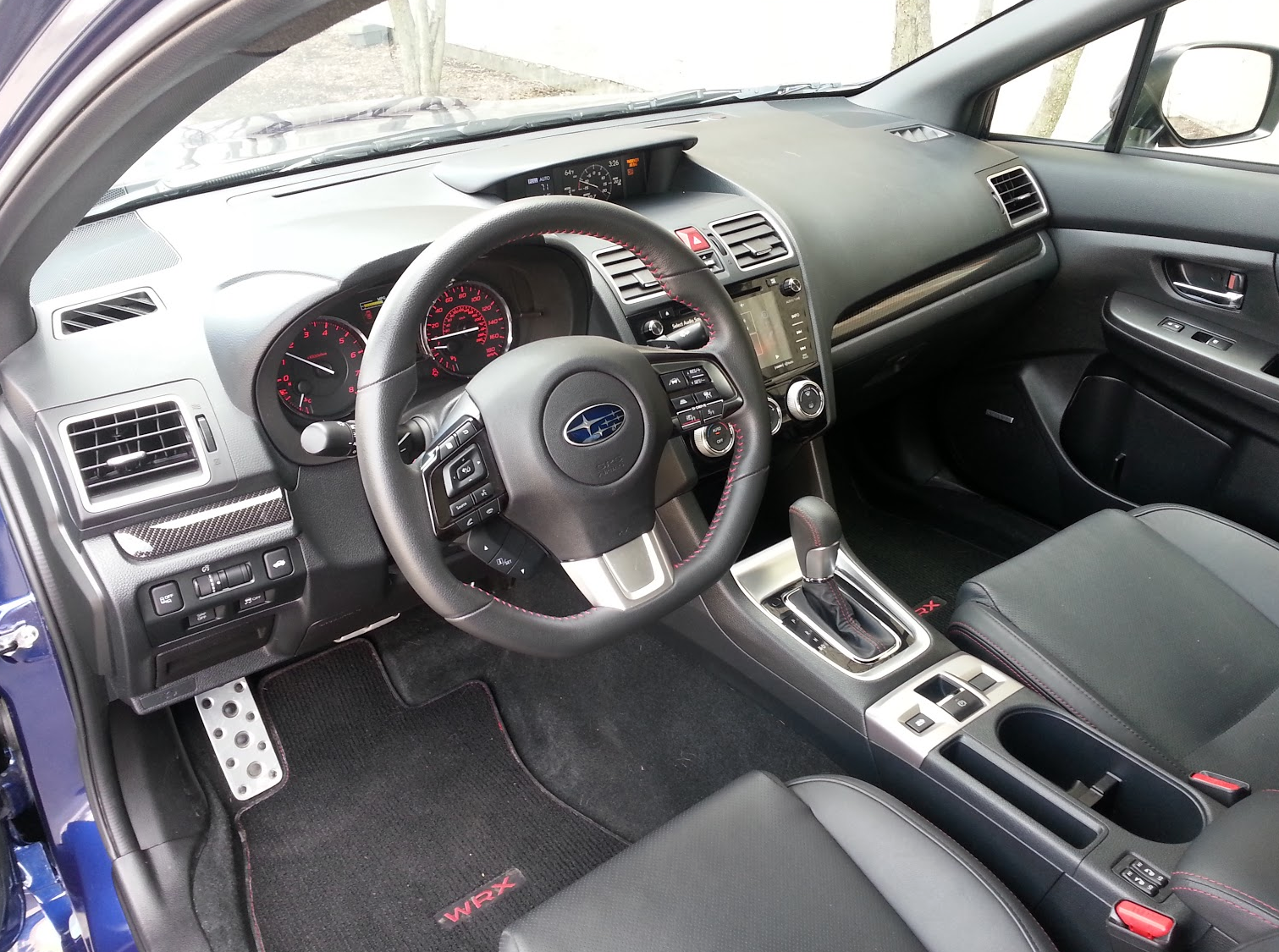 The WRX’s cabin decor is appropriately sporty, but it doesn’t quite match the upscale ambiance of the Volkswagen GTI.

The one that CG editors drove was the top model of the tamer branch of the WRX family, available in base, Premium, or Limited trim. Hairier still—in performance and presentation—are the WRX STI versions. However, the more demure WRX still offers lots of potential excitement with a fair amount of daily driver practicality.

A turbocharged 2.0-liter four-cylinder engine in Subaru’s traditional “boxer” layout that makes 268 horsepower at 5600 rpm and 258 lb-ft of torque at 2000 revs provides power. (Among the STI’s added performance features is a 2.5-liter turbo four rated at 305 horsepower.) A six-speed manual transmission is standard, but WRX Premium and Limited can be had with a continuously variable transmission (CVT) that acts like an automatic—and all the more so with the accompanying SI-Drive clicked into “Sport#” (read Sport sharp, as in musical notation, not social-media hashtagging). Then the CVT is programmed to behave more like an eight-speed stepped-gear automatic, with palpable “shifts.” In this mode the transmission reads things like inclines, cornering forces, and abrupt braking to modify the timing of shifts to maximize performance, and there are steering-wheel paddle shifters for drivers who wish to take matters into their own hands—or fingertips at least.

The fast-acting twin-scroll turbocharger makes the WRX a particularly speedy thing when in Sport#, which also quickens throttle response. Transmission kick-down is prompt. However even in economy-minded “Intelligent” mode (there is also an intermediate “Sport” setting) this is still a fairly spirited little sedan, and the CVT doesn’t feel as lackadaisical as similar devices in some other cars. EPA fuel-economy estimates are 19 mpg in the city, 25 on the highway, and 21 combined. Mixing it up between the SI-Drive modes on a stint of 157 miles (with 61 percent under city conditions), this driver averaged 21.45 mpg.

Ride is very firm, enough so to make crossing railroad tracks or broken pavement a jolting experience. For 2016, WRX Premium and Limited models have a revised front suspension with inverted struts that Subaru says improves hard-cornering performance. This driver didn’t have to push the WRX much beyond the bounds of normal commuting, but even then lean in turns was tightly controlled, and steering was direct and highly responsive. As is in most Subarus, all-wheel drive is standard, and the WRX includes active torque vectoring to direct power to the wheel or wheels that need it most. 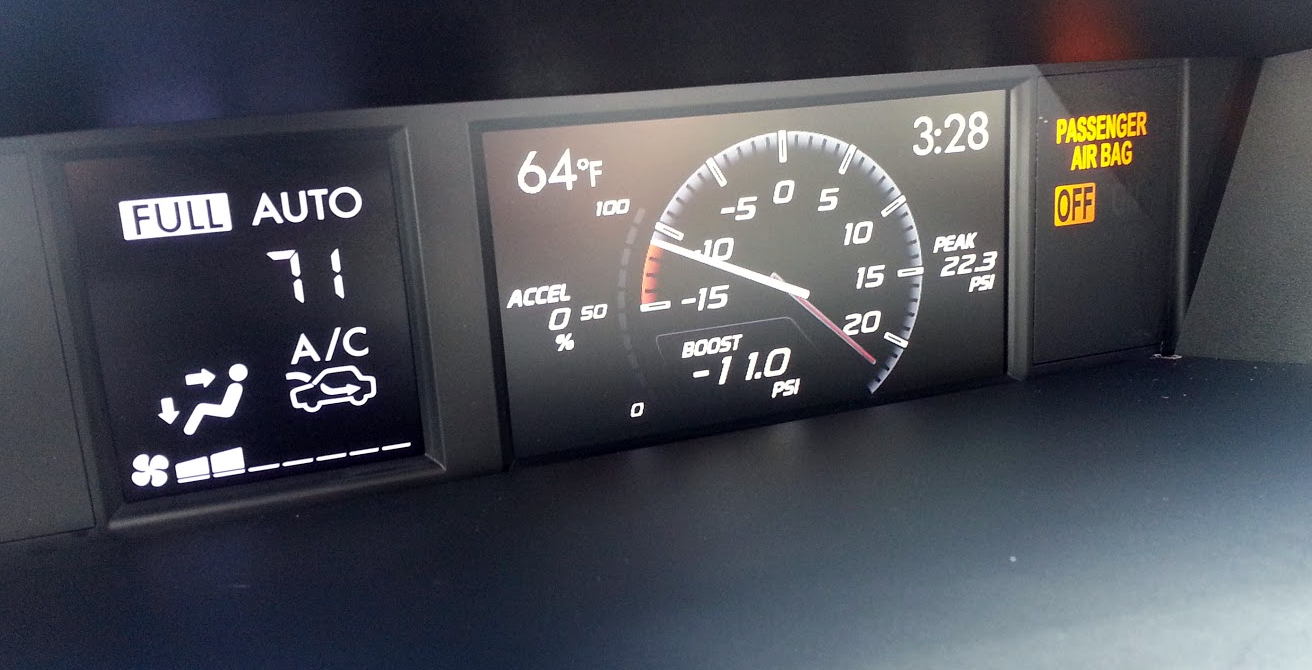 A supplemental digital display above the main touchscreen supplies climate info and a turbo boost gauge, among other configurable readouts.

To the base WRX package the Premium and Limited add 18-inch gray-finish alloy wheels, a windshield wiper deicer, heated exterior mirrors, fog lights, heated front seats, and a power moonroof. The Limited, which starts at $1500 more than the Premium, also gets an eight-way power driver’s seat, leather upholstery, and LED headlights.

With the WRX’s resources primarily lavished on performance features, interior ambience is toned down somewhat. There are large sections of hard plastic around the cabin, and overall appearance is fairly monotone. It would be decidedly wrong to call the car Spartan, however. The comfortable leather seats have bolstering for improved side grip, and they’re perked up with red contrast stitching that’s continued on the armrests and leather-wrapped steering wheel. Spongy material with some “give” is applied to the dash top and the tops of all four doors; soft material is found on the armrests and door centers, too. Trim strips with the look of carbon fiber adorn the center of the dash.

The driving position is low for a sedan, but front room is good for most builds. Two adults will fit in back with decent legroom as long as front occupants don’t need a long stretch. Driver vision is very good in all directions thanks to thin roof pillars and lots of glass. 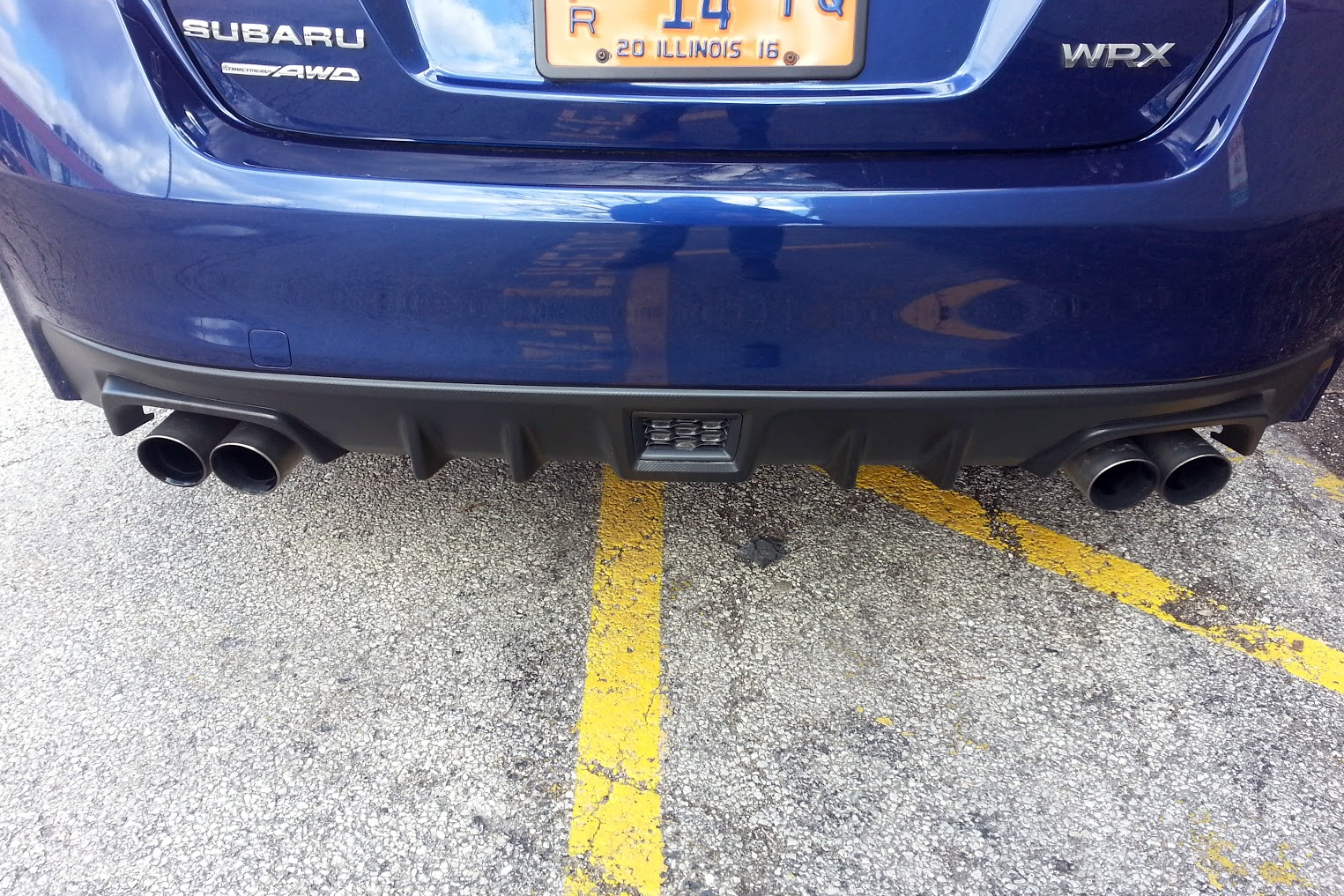 Climate controls rely on three easy-to-set dials, and radio presets were programmed without fuss on the touchscreen. Apps on the standard Starlink multimedia system that display weather information, sports headlines, etc., arrive promptly to the touch, but still draw attention from the road. One oddity is a vehicle-information readout at the top center of the dash. Its graphics are clear (among the available digital displays is a turbo boost gauge) but it takes a bit of a reach to access the lever that lets the driver scroll through the readouts.

The glove box is big enough to hold the owner’s manual but not much else. There’s a smallish console cubby with USB port auxiliary input, and power point. The top is padded but the box is positioned too far back to effectively serve as an armrest. Two open cup holders are in the console, there’s an open bin ahead of the shifter, and front doors have large pockets with bottle holders. Rear storage consists of a pouch on the back of each front seat, twin cup holders that pop out of the back of the console, and door pockets just big enough for bottles.

Trunk space is OK for a compact sedan, with a wide opening and a tiny bit of room for small objects under the trunk floor. Rear seats fold in a 60/40 split for additional cargo room. They sit flat at a slight rise over the level of the trunk floor but the transition from the trunk is uninterrupted.

With the CVT, the WRX Limited starts at $31,595 (a $1200 increase over a car with the manual gearbox). CG’s test ran up to $36,485 with delivery and options that included a voice-activated navigation system with a bigger seven-inch touchscreen and upgraded audio, plus added safety features including the newly available blind-spot detection and rear cross-traffic alert. It’s a substantial fee for a compact car, especially one with a hard ride and a hard-to-ignore exhaust note, but for drivers who want a lot more than simple transportation, the WRX may be worth a few compromises. 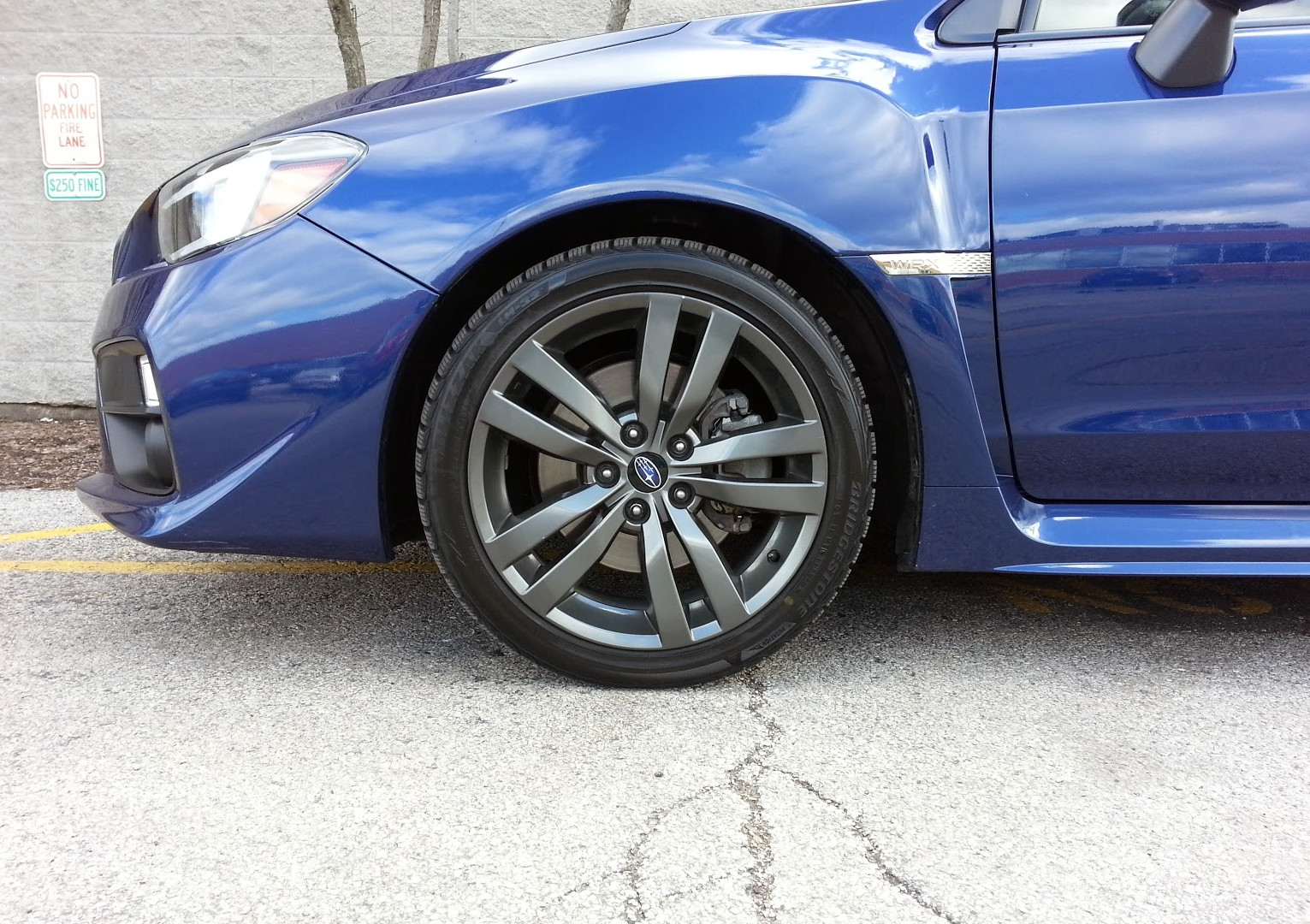