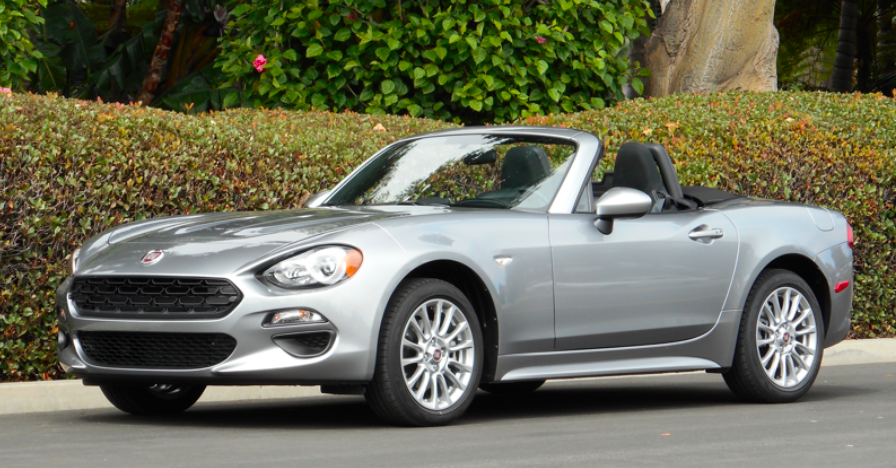 Fiat revives the “124 Spider” moniker from its past for a 2-seat, rear-drive sports car due on sale this summer at a starting price of just under $26,000.

Ever since Fiat introduced the prototype 124 Spider at the 2015 Los Angeles Auto Show, critics have derided it as little more than a “badge-engineered” Mazda Miata. But although the is indeed based on the Miata’s platform – and built at the same Japanese factory – that’s a vast oversimplification of the truth. 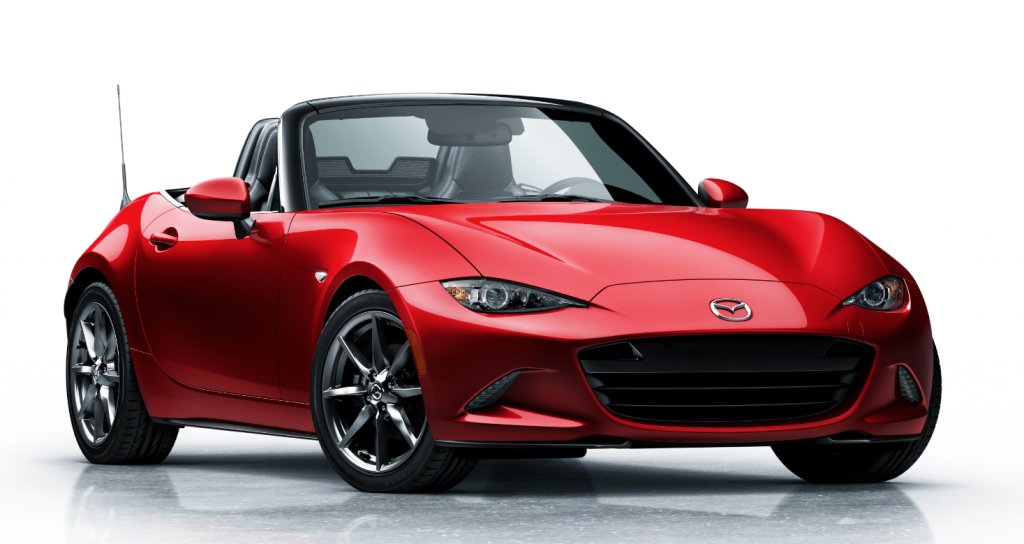 Influencers for the 124 include the current Mazda Miata, which shares its platform …

Fiat says every body panel on the 2017 Fiat 124 Spider is unique, as are the front and rear facias. And if you set the 124 and Miata side-to-side – as we have – that is very clearly the case. Whereas the Mazda sports swoopy sculpturing, the Fiat is boxier, exhibiting many styling elements of the original 124 that was sold in this country from 1968 through 1983. Furthermore, the 124 carries a completely different engine, and the interior furnishings have been altered.

Pricing is different as well, with the base 124 Classica starting at $25,990 (including destination), about $240 more than the Miata. Up from there is the luxury-oriented Lusso at $28,490, with the line-topping Abarth performance model at $29,190. For all versions, automatic transmission adds about $1400. When the 124 goes on sale this summer (fall for the Abarth), the first 124 examples will be specially trimmed Prima Edizione models with unique blue paint, numbered badges, and a $35,995 price tag.

Considering the modest price differential, it’s surprising that the 124 comes with a turbocharged engine instead of the Miata’s naturally aspirated one. Beneath the 124’s “twin bubble” hood lies a 160-horsepower 1.4-liter turbo in place of the Mazda’s 155-horsepower 2.0-liter four. While horsepower is about the same, the turbo brings a notable boost in torque: 184 lb-ft vs. 148. EPA fuel-economy ratings are 26 city/35 highway with the manual transmission, 25/36 with automatic – all within 1-2 mpg of the Miata’s figures. 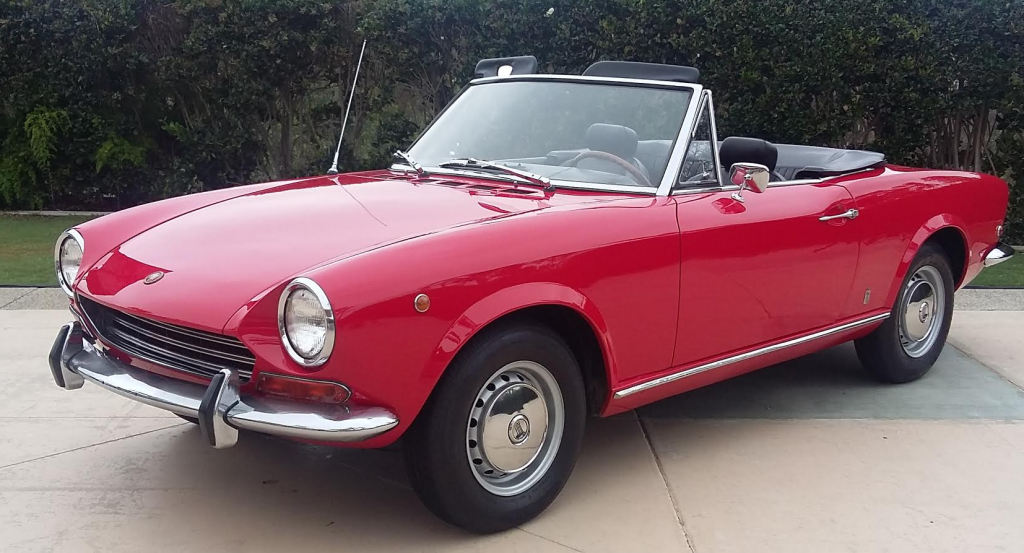 … and the original Fiat 124 Spider introduced in the late ’60s for styling elements.

How Turbocharging and Supercharging Work

Fiat says the interior materials have been upgraded over those of the Miata, and by most measures, that’s the case. Whereas the dash top and door tops on the Miata are hard plastic (with the door tops painted body color), both are padded on the 124, which offers a two-tone black/saddle color combination (black/red on the Abarth) to replace all black. Across the dash face is a swatch of piano-black trim; my drive partner and I – both old enough to remember the first Fiat 124 – thought that a woodgrain one would be a nice retro touch, as the original car’s dash looked to be made out of a maple plank.

Fiat claims the seats are different, but if that’s the case, it’s not terribly obvious – again, based on a side-to-side comparison. The Miata’s seats are unusual in that they’re constructed of fabric stretched over metal framework (sort of like an Army cot) instead of foam cushions over springs. While that makes the Miata’s seats very thin and light, some might find it doesn’t do much for comfort (and I’m one of them, as they seem short on lumbar support), and wider folks may find the edges confining. This is one area Fiat could have really differentiated the 124 simply by substituting seats out of one of its other cars, though the thicker backrests would have effectively reduced what is already rather tight legroom for tall drivers. And it almost undoubtedly would have driven up cost. As it is, the difference seemed to be mostly in seat-cover materials, though Fiat seemed to indicate that the cushioning pads were different as well. Heated seats are available, and the ones in our test car worked well when we started out on a cool summer morning. 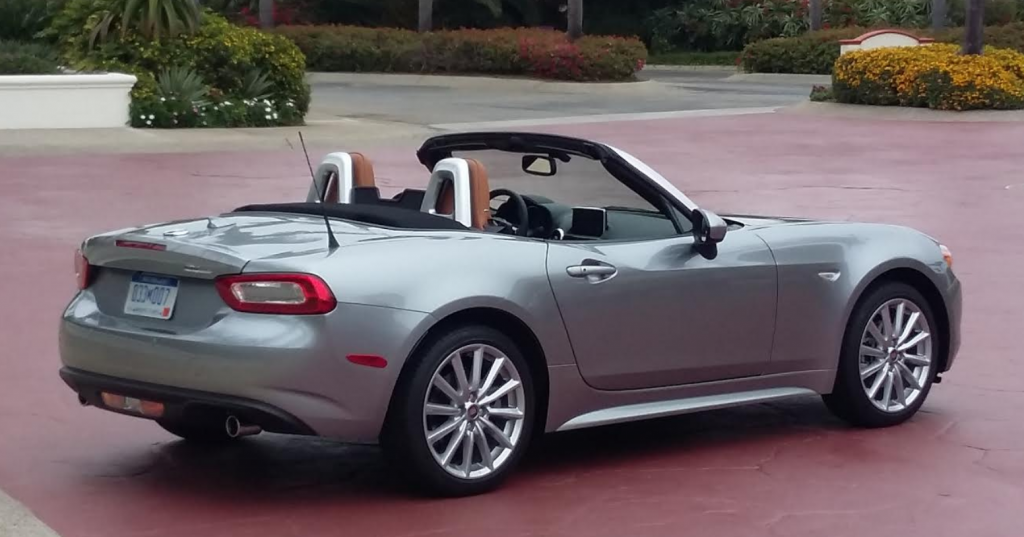 All the 124’s sheetmetal is different from that of the Miata, as is the engine …

Otherwise, those familiar with the Miata will feel right at home in a 124. The dash and control layout is – for better or worse – unchanged. Ditto for interior storage space, which is meager at best.

As in the Miata, a screen protruding from the top of the dashboard pairs with a console-mounted control knob for adjusting audio, phone, and navigation controls. We don’t find the system as easy to use as the best, and some of our drivers have complained that their arm would accidently hit the control knob – which can change audio sources – when they go to shift gears. By contrast, the climate controls consist of three rotary dials, which are quick and easy to adjust.

Also like the Miata, the 124 has no conventional glovebox and no map pockets in the doors. Instead, there’s a small forward console bin that carries Aux and USB jacks, a very small and shallow covered console tray (a cell phone laid flat about fills it), and a covered bin inconveniently located in the back wall behind and between the seats, just ahead of which are the equally inconveniently located cup holders (which would work just fine if you could pick up your latte with your elbow). 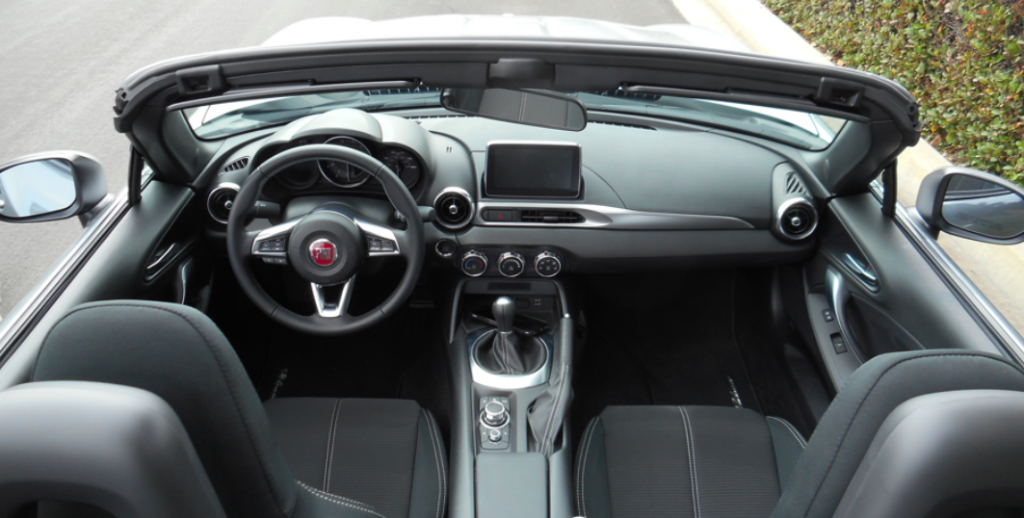 While most of the 124’s suspension pieces are shared with the Miata, Fiat says the tuning is unique. The ride seemed about the same, which is to say, surprisingly compliant for a sports car. But what sets these cars apart is the handling – or more specifically, the steering. This is probably also about the same as for the Miata, but regardless, the 124 exhibits a great “sports car” feel I don’t think any other car close to this price can match … well, maybe a Mini Cooper. While steering effort is fairly light, you only have to turn the wheel a touch off center before the car is turning, and just small inputs make it turn more. Furthermore, it really wants to drive into corners rather than shoot wide (as do most cars), which adds to the sporty feel. This kind of quick steering response – while exceptionally satisfying – sometimes makes a car feel twitchy going down the highway, requiring lots of minute steering inputs to keep it going straight. But we didn’t notice any such problem with the 124.

Visibility is OK to the front corners, fine to the sides, but quite restricted back and to the rear corners unless the top is down. And speaking of the top, like the Miata’s, it can be raised and lowered with one hand from the driver’s seat, though you have to get a good angle on it (which you can’t if you have the seat set very far forward) and have some arm strength. A couple of shorter women on the press trip couldn’t manage it. 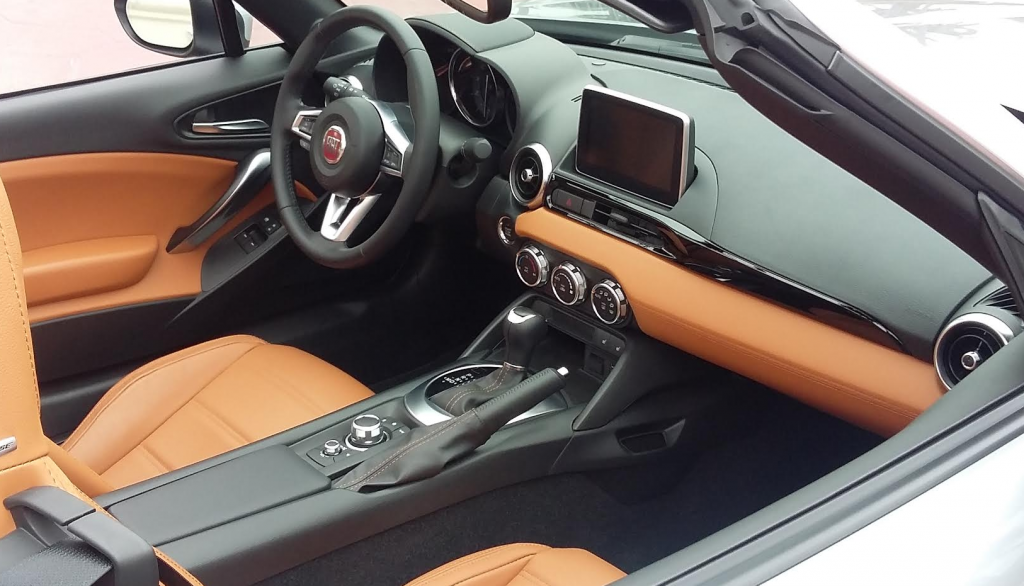 A black/saddle two-tone interior combination is available to replace all black.

According to the specifications, the 124’s trunk is a bit larger than the Miata’s, though they look about the same size. As the Fiat is roughly five inches longer than the Mazda – most of it apparently in rear overhang – it’s possible the trunk is also a touch longer front to rear, but it’s a really small amount if any. Still, there’s probably enough space for a weekend’s worth of soft luggage, which is about all you can ask for in a 2-seat convertible. (And by the way, lowering the top doesn’t eat into the cargo space.)

Since – as a low-cost, rear-drive, 2-seat convertible – the Miata previously had no real competition, the obvious question is whether this newcomer with the Fiat badge is actually a better choice. But there’s no real obvious answer. Styling may tip it one way or the other for some, while others may like the idea of having a turbo engine – or not. Those straddling the fence on those two issues will find it worthwhile trying both, as there are far more differences than initial observers may have thought.

The 2017 Fiat 124 is different enough from its Mazda Miata cousin to warrant potential buyers checking out both.