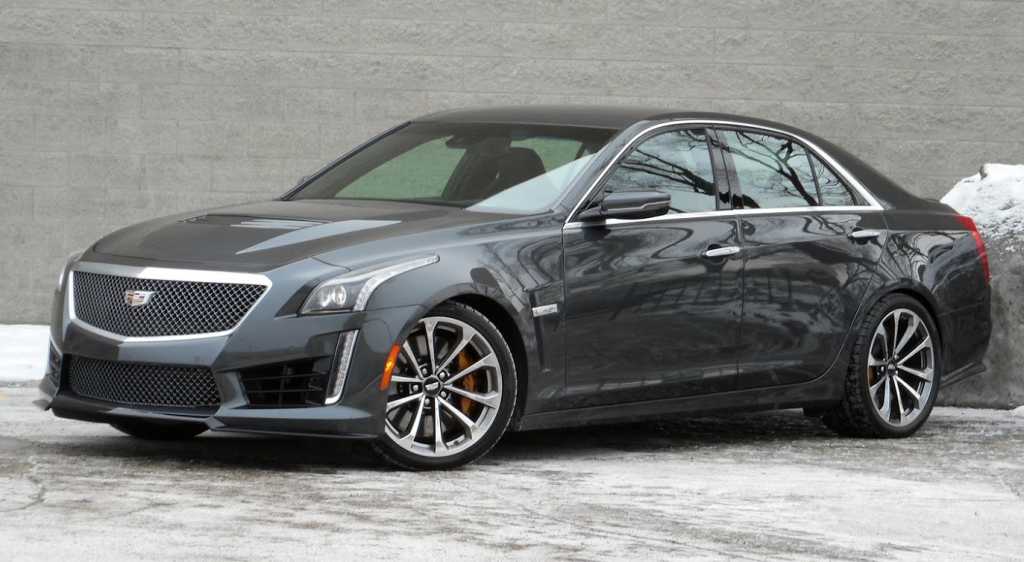 The not so good: Rear-seat passenger space

Attention weathermen: Forget your fancy Doppler radar and long-range computer-model forecasts. If you want to know if it’s going to snow in Chicago on a given day in January, just check to see if a very-high-performance test car has been delivered to Consumer Guide®. If the answer is “yes,” then you can predict with near certainty that the area is going to see some white stuff. 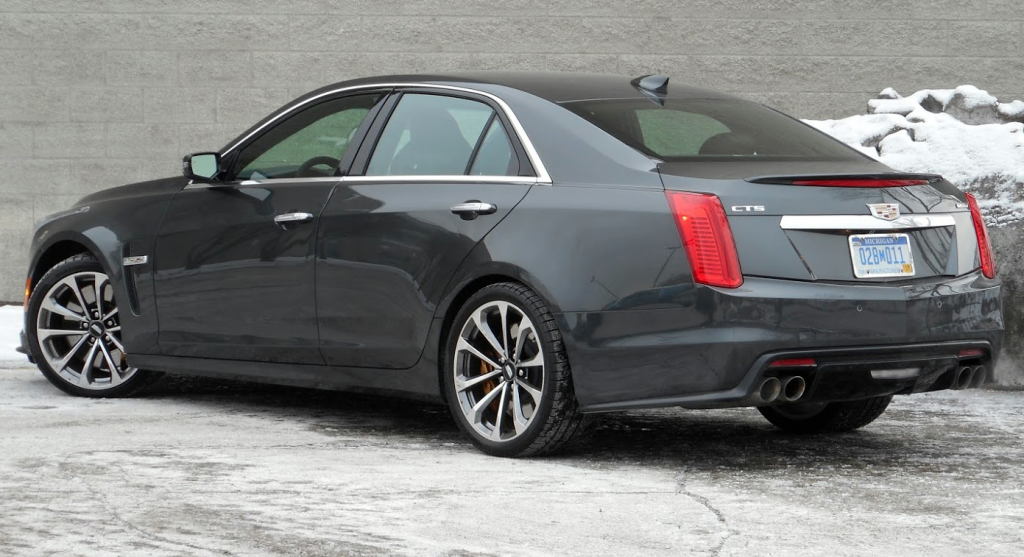 It happened again the day a 2016 Cadillac CTS-V sedan landed in the CG parking lot. Packing a 6.2-liter supercharged V8 driving the rear wheels, this is the first “V” built off the 3rd-generation CTS platform that bowed for the 2014 model year. (CTS-Vs sold in 2014-15 were based on the gen-2 architecture.) It is, however, not the best substitute for a 4-man bobsled during a snow-spangled evening rush hour. 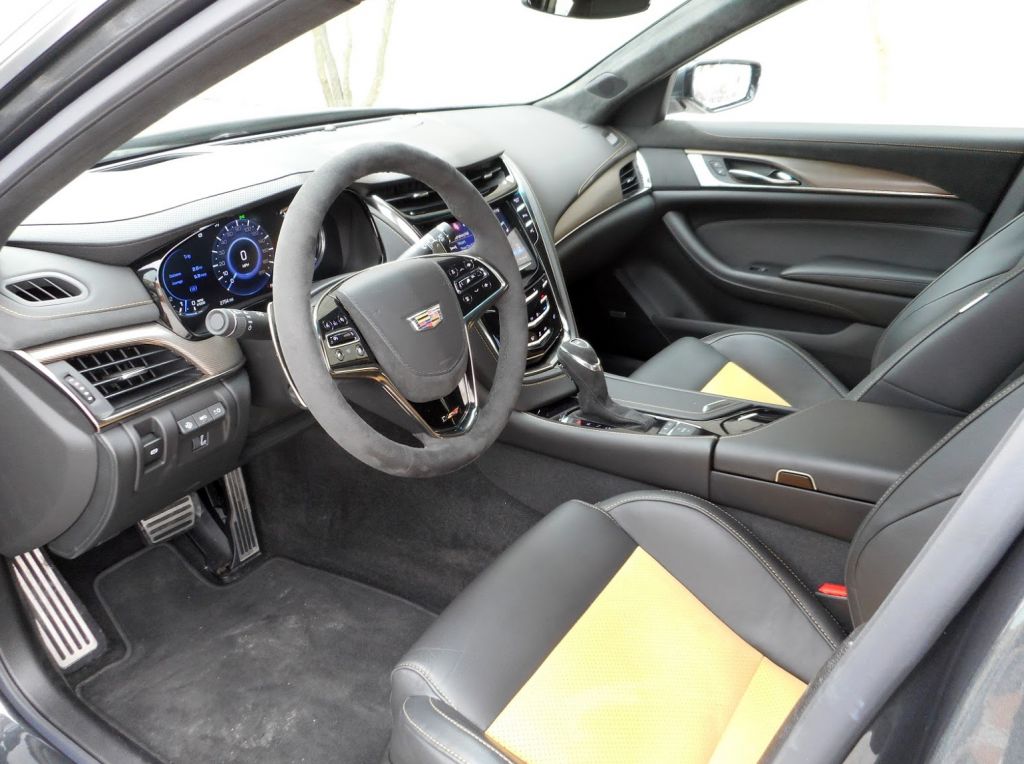 The Cadillac CTS is small inside for a midsize car; there’s only adequate headroom and legroom for tall adults.

Those were not the right conditions to be trying to get a feel for what a Caddy with the robust heart of a Corvette Z06 could do, even with the standard Michelin “summer” performance tires swapped out for more seasonably appropriate Pirelli rubber. (Galoshes might have helped, though.) Indeed, it wasn’t until his third—and final—morning with the car that this tester had a reasonably warm enough and dry enough commute to consider stretching the car out a bit.

With 640 horsepower and 630 lb-ft of torque, the CTS-V tops the premium-midsize class for power output. Despite this embarrassment of riches—Cadillac claims a 0-60-mph time of 3.7 seconds and 200-mph top speed—the engine is very smooth and quiet at idle. Tooling around in the 8-speed automatic transmission’s base “Tour” setting provides all the ready power an executive-class grocery-getter can use without despoiling its luxury-car trappings. Switching to “Sport,” acceleration becomes more responsive, propulsive, and audible. (There are also “Track” and “Snow/Ice” modes, and the former opens up a menu of choices to further fine-tune the driver’s experience.)

What the CTS-V won’t do is sip premium fuel, even with cylinder deactivation that allows the engine to run on 4 cylinders when not stressed. This driver’s 166.3-mile test came out to 13.9 mpg, with 70 percent city-style driving. That wasn’t quite up to the car’s thirsty 14-mpg-city estimate from the EPA.

The CTS-V is well stocked with performance parts and systems, starting with the vented carbon-fiber hood. The engine is hooked to high-capacity cooling and a stainless-steel exhaust system. Nineteen-inch alloy wheels whir around in front of meaty Brembo disc brakes. Launch control, magnetic damping, an electronic limited-slip differential, and specially tuned electric power steering are included, too.

The “V” is a tight, solid rig with a firm ride that still (pleasantly) masks its supercar status. Shifting from Tour to Sport firms up already-responsive steering, and cornering lean is well controlled. To the degree that Snow/Ice mode might help keep the car out of trouble, it can’t defy nature. This driver clicked into it when surface conditions warranted, but still had to feather the throttle up a short but somewhat steep rise in order to counter side slip.

The Gentleman’s Hot Rod: We Go the Distance in a Lexus RC-F 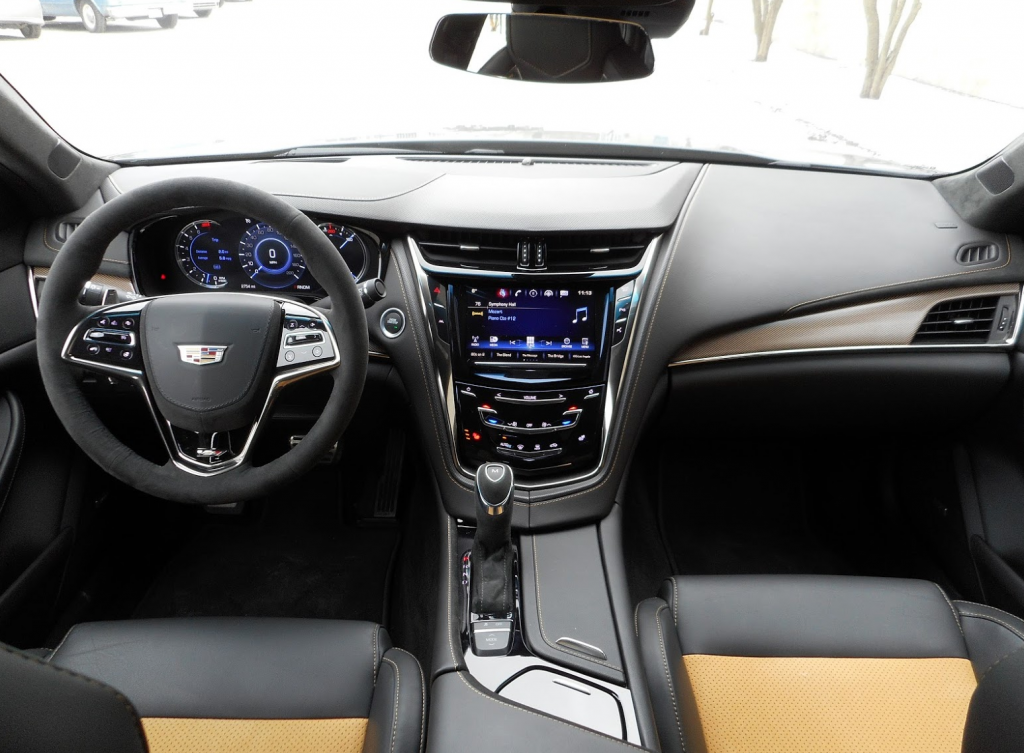 Fit, finish, and materials quality are top notch in the CTS-V’s interior.

CG’s test car was outfitted with extra-cost Recaro sport seats that are firmly bolstered on the sides (so much so that they almost make it hard to get into the car). Like the standard seats, they feature “sueded” microfiber inserts, but lack the base seats’ ventilation and cushion extension. This driver found the back rests of the Recaros more comfortable than those of the seats in a V6 CTS previously tested, but he would have liked a little more leg support that the cushion extender could have provided. The bright Safron/Jet Black interior in the test car was one of three upholstery-color choices available for the new CTS-V.

The rest of the interior features pliable soft surfaces almost everywhere, plus carbon-fiber door and dash trim. Controls loom large and bright on the 12.3-inch configurable information display. (Changing the modes changes colors of the virtual dials, with Track mode switching the speedometer to a tachometer.) Being a Cadillac, the CTS-V comes with the CUE infotainment system. Though CUE is somewhat improved this year, this driver doesn’t find it easy or intuitive to use. However, voice commands can help you get most of what you need, and climate settings can be adjusted via the touchpad on the center console.

Unfortunately, no CTS has an overabundance of passenger room. Straight-ahead leg room and head room in front aren’t bad, but front footwells don’t leave a lot of lateral space. Rear passengers are separated by a tall driveline tunnel that makes this a 4-seat car in practice, and leg room is good only if the passenger in front doesn’t track too far back. Otherwise, it’s a knees-up, heels-back experience.

Then, too, cabin storage is a bit limited. The console holds two covered cup holders, a small covered bin with USB/power plug-ins, and a modest cubby under the arm rest. The power-opening glove box is fairly generous. Long, narrow front-door pockets have no provision for bottles. Rear passengers can call upon seat-back pouches and a pull-down center armrest with a shallow covered storage space and two pop-out cup holders. There’s also a power plug accessible from the back of the console. 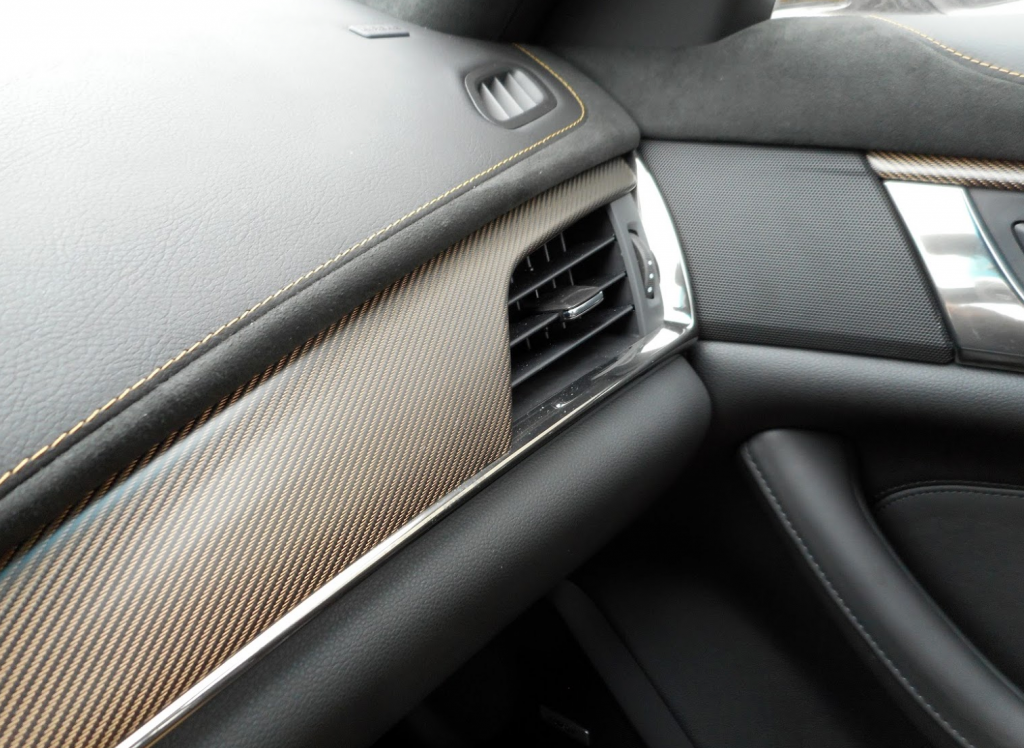 The trunk extends far forward, but is somewhat narrow between the wheel houses. An open bin on the right side and some shallow storage space under the floor can hold loose incidentals. The standard rear seat in the CTS-V doesn’t fold to extend cargo capacity but a central pass-through is included for long items.

Other notable standards in the $83,995 starting price include 20-way adjustable front seats, automatic seat-belt tightening, aluminum sport pedals, heated steering wheel, head-up instrument display, automatic parking assist, Bose audio system, navigation, and dual-zone automatic climate control. Digital-connectivity features include wireless charging, Apple CarPlay capability, and 4G LTE Wi-Fi. What’s not there that luxury cars (and some not so luxurious) have? A sunroof costs extra. So do split-folding rear seats. At $91,385 delivered, like CG’s test car cost, that kind of stuff might be missed. Or not—considering that this Cadillac still outpowers some highly regarded European rivals at a considerable discount.

A tip: Use some of what you save to a buy a couple of snow shovels.