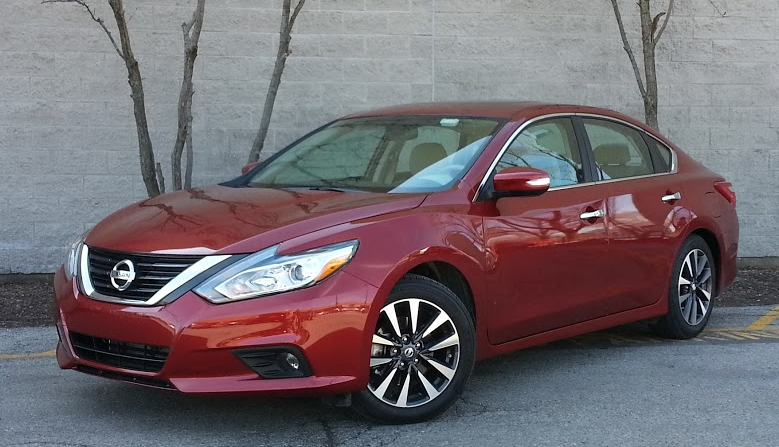 Nissan’s midsize Altima was restyled for 2016 and gained several new high-tech safety features, many of which were included in our $32,115 test car.

The not so good: Cargo versatility

Nissan has turned its Altima midsize sedan into a fairly complete car for 2016—at least as complete as its very full and highly competitive market segment requires. Getting to that point has come with some updating of appearances (notably adopting Nissan’s “V-Motion” grille theme) and adding safety and technology features. 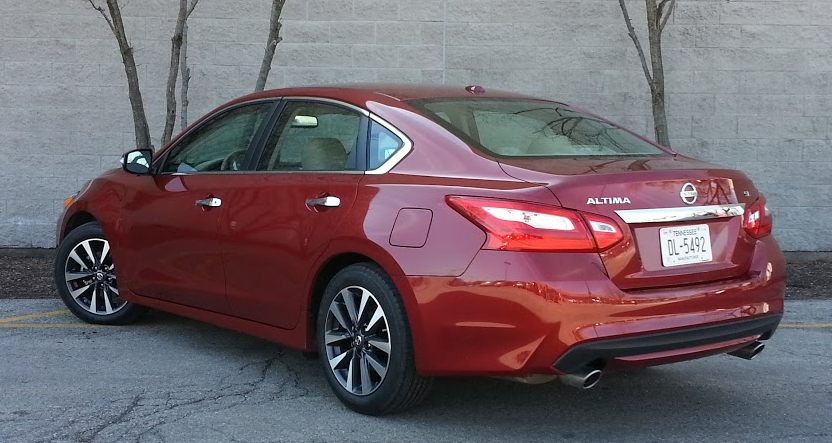 The “ultima” of the new Altimas is the SL model that Consumer Guide® editors got to try out. SL standard equipment that is newly available to this vehicle line includes blind-spot and rear cross-traffic alerts, as well as NissanConnect with mobile apps. This last item interacts with smartphones to access apps, music, phone contacts, and maps, and includes Siri Eyes Free and hands-free text messaging. A few other new tech features are optionally available.

That was hardly the end of the tale for the Consumer Guide® tester, however. The $32,115 total (with delivery) incorporated an extra-cost moonroof, floor and trunk mats, and a $1700 Technology Package. Key features of the tech group are a navigation system, seven-inch color touchscreen, adaptive cruise control, forward-collision mitigation (it automatically applies the brakes in advance of an impending collision), and class-exclusive Predictive Forward Collision Warning, which uses radar to search two vehicles ahead to warn if that vehicle is slowing rapidly. 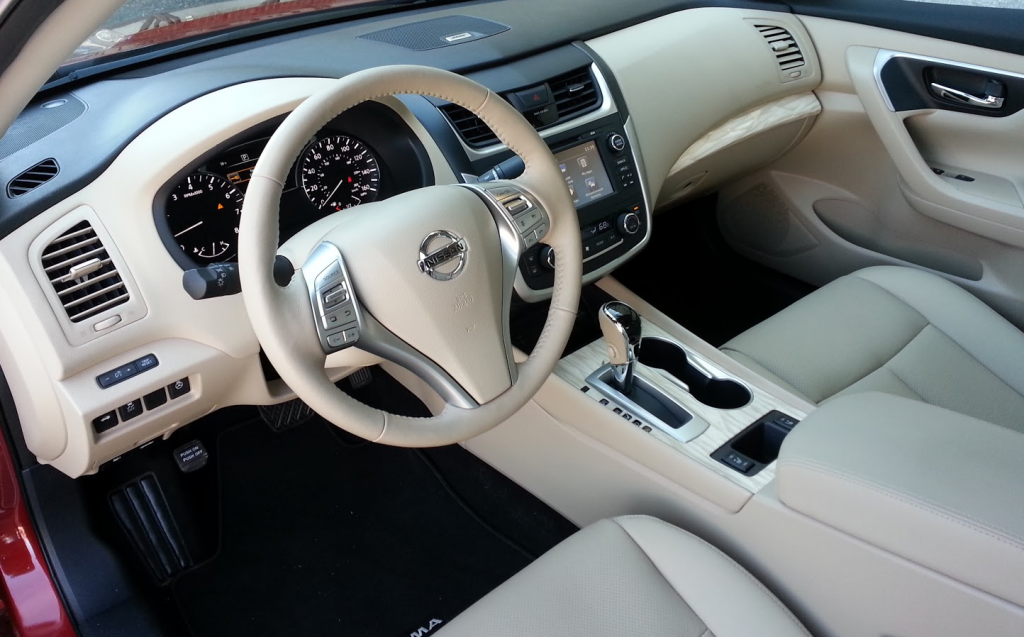 Interior materials are nice for the price, and infotainment adjustments are relatively easy to execute.

Dressed to the hilt in SL form, the Altima presents well as a comfortable, fairly roomy, and useful intermediate sedan. Seats are supportive with a rich feel, and soft-to-the touch surfaces are generously applied to the dash and door panels. “Brushed Silver Wave” trim—with the look of blond wood—covered portions of the instrument panel and center console of the beige interior in CG’s sample car.

Rear passengers sit slightly higher than their front-seat companions, which allows them to rest a little more flat-footed, thus maximizing legroom—which isn’t half bad. Headroom in back isn’t quite as good as in front, but six-footers will still fit. Entry and exit are uncomplicated, and driver vision is good to all angles thanks to thin roof pillars.

Large speedometer and tachometer dials are easy to read. Between them is the multifunction Advanced Drive Assist display, which doesn’t come off as well. Characters are small, and the display leans back into a depression within the instrument cluster, which just moves the images that much further away from the driver. The optional touchscreen not only controls the nav system but it absorbs the radio preset buttons. Presets are easy to make and retrieve, and volume control and station tuning is handled by separate knobs. As for climate controls, there’s a rotary knob for temperature adjustment, but fan speed and mode selections are regulated by repetitive-step pushbuttons.

Interior storage benefits from an exceptionally deep glovebox; a bin at the front of the console with auxiliary, USB, and 12-volt power inputs; a large two-tier console box with another power point; and a pouch on the back of each front seat. Door panels include modest map pockets with bottle holders. There are two exposed cupholders set into the console, and two more in the rear-seat pull-down armrest. 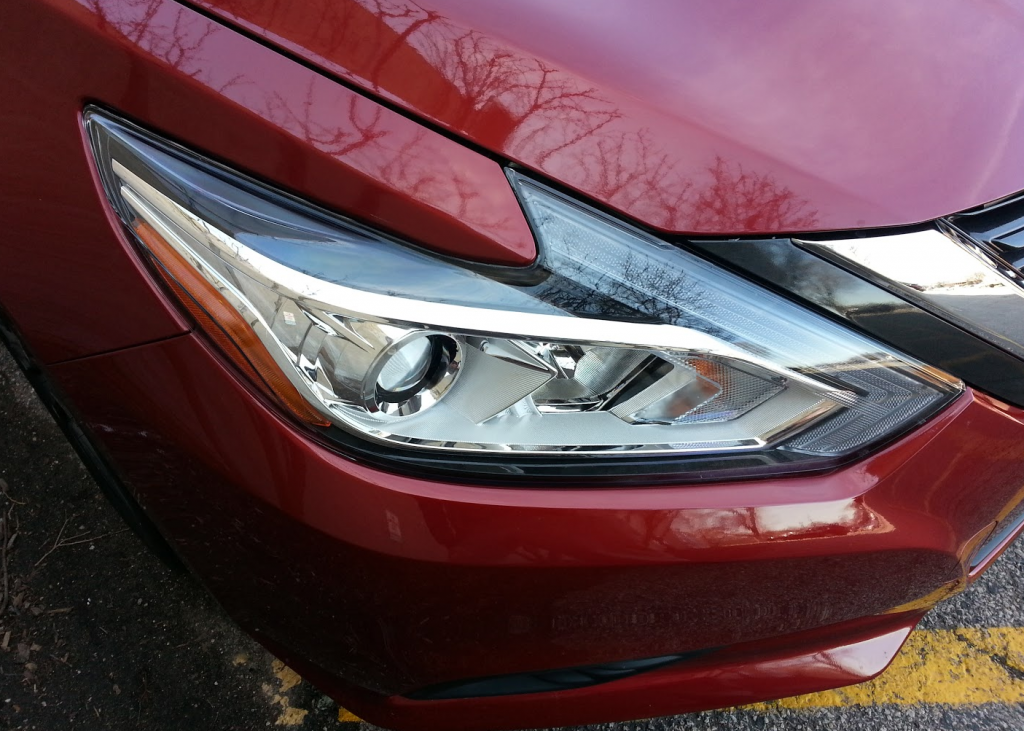 LED accent lights give the front end some upscale character.

Trunk capacity is average for the class. The area is widest at the rear, but gooseneck hinges extend into the load area, and a foam tire-tool tray under the trunk floor has a very limited space for small items. Standard 60/40-folding rear seat backs make it possible to expand cargo room—with some limits. For one thing, the seat backs don’t lay especially flat, and they rest about three inches above the trunk floor when retracted. For another, a bulkhead behind the seats considerably reduces the size of the pass-through area (though the Altima is hardly alone in this).

The 182-horsepower four-cylinder engine serves the car well, just not spectacularly. Neither jackrabbit nor laggard off the line, it will build enough steam on the expressway to cruise comfortably and pass without worry. The CVT is set up to deliver something with the feel of stepped-gear-transmission shifts, which tamps down the often-noisy free-revving operation of some transmissions of this type. Still, it can’t completely overcome the common CVT bugaboo of leisurely downshifting when more power is needed. The four in the SL is EPA-rated at 27 mpg in the city, 39 on the highway, and 31 combined. This driver would have loved to have seen something close to that in his 126-mile stint in the car. With 58 percent city-type driving, he recorded a curiously low 21.8 mpg.

The Altima SL handles and rides well, though its moves are hardly sporty. (There’s a new SR model for that.) Steering is responsive enough for good maneuverability, and braking is prompt and predictable.

Even with its improvements, the Nissan Altima doesn’t quite rule the roost in the midsize field. It does have its share of things to crow about, though.

Altima is a good all-around sedan that has recently been ranking third in sales (behind Honda Accord and Toyota Camry) in the hotly contested midsize class.