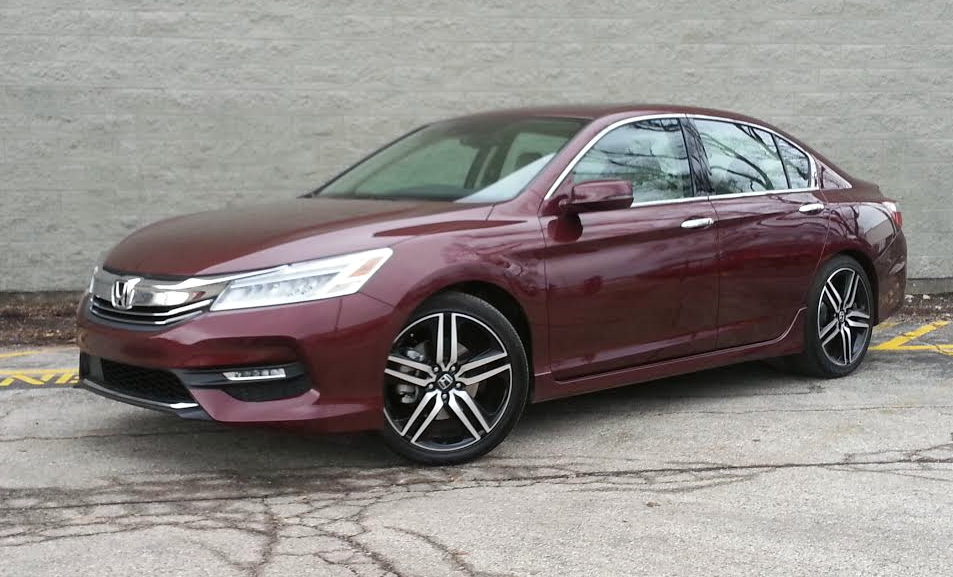 The not so good: Old-school V6 fuel economy

Here’s the 2016 Accord with everything but the kitchen sink (we looked; it’s not in there): smooth V6, automatic transmission, ample luxuries, and tech features galore. No doubt about it, this is Honda’s big dog. 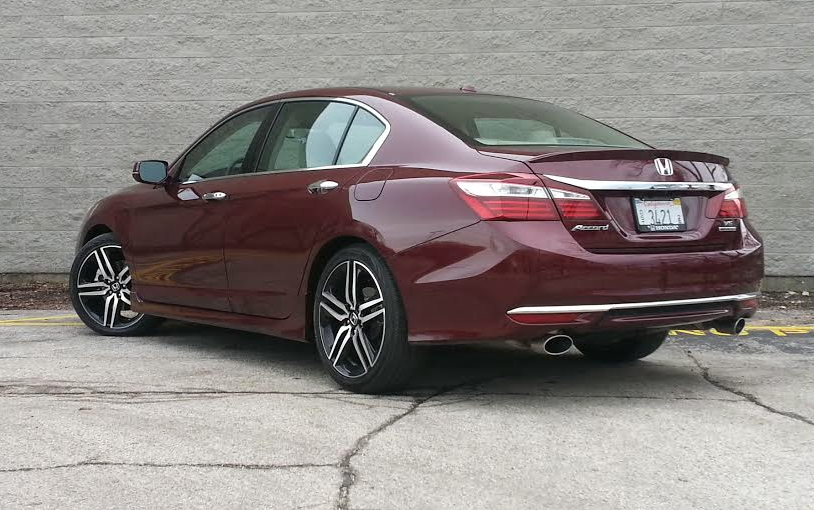 Of course, you don’t get everything for nothing. This line-topping Accord Touring is priced at $34,580. That’s not the most that anyone’s charging in the midsize-sedan class, but it’s close to the top. Certain Touring standard features—V6/automatic powerteam, Honda Sensing electronic safety-systems suite, satellite-linked navigation with voice recognition, 19-inch alloy wheels—can be found in some combination further down the line. But if you want all that thrown in and LED headlights with automatic high-beams, rain-sensing windshield wipers, body-colored parking sensors, and heated rear seats, then you’re going to have to pony up for the most Accord that money can buy. 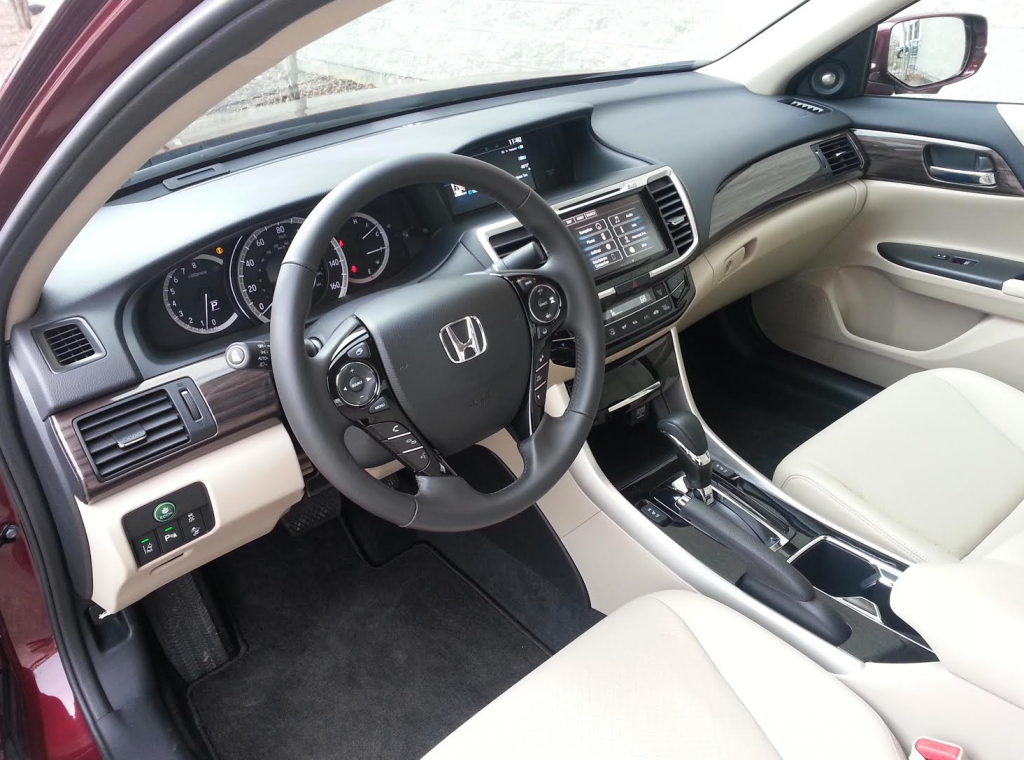 All Accords boast ample front-row space, even for larger and taller occupants.

The Touring in this test is Consumer Guide®’s second go-round in a 2016 Accord, CGers having previously tested a Sport upfitted with a continuously variable transmission and Honda Sensing (collision-mitigation braking, road-departure mitigation, forward-collision warning, lane-departure warning, lane-keeping assist, and adaptive cruise control). However, the Sport is a 4-cylinder car where the Touring packs a 3.5-liter ohc V6 that develops 278 horsepower at 6200 rpm and 252 lb-ft of torque at 4900 revs. This smooth, quiet powerplant delivers good acceleration for easy cruising and secure passing—providing you don’t have the “Econ” mode activated. It changes fuel delivery for more economical operation, but makes a palpable dent in the car’s pick-up. (The fine 6-speed automatic also has a “Sport” setting for more spirited driving.)

The V6’s added power and smoothness come at a cost at the gas pump. It is rated by the EPA at 21 mpg in the city and 34 mpg on the open road. This driver averaged 22.18 mpg from a stint of 160.2 miles, 61 percent of it in city-style driving, and mostly in the “base” mode. That’s almost 7 fewer mpg than he got from the Sport’s four (albeit with more highway driving).

There’s a high level of composure and control to the ride and handling, with good bump absorption, just-right steering weight, and responsive and easy-to-modulate brakes. Note that the Sport and Touring, which share a 19-inch wheel-and-tire package, have a 39.6-foot turning diameter that’s 1.5 feet wider than that of other Accord models with smaller and narrower footwear. 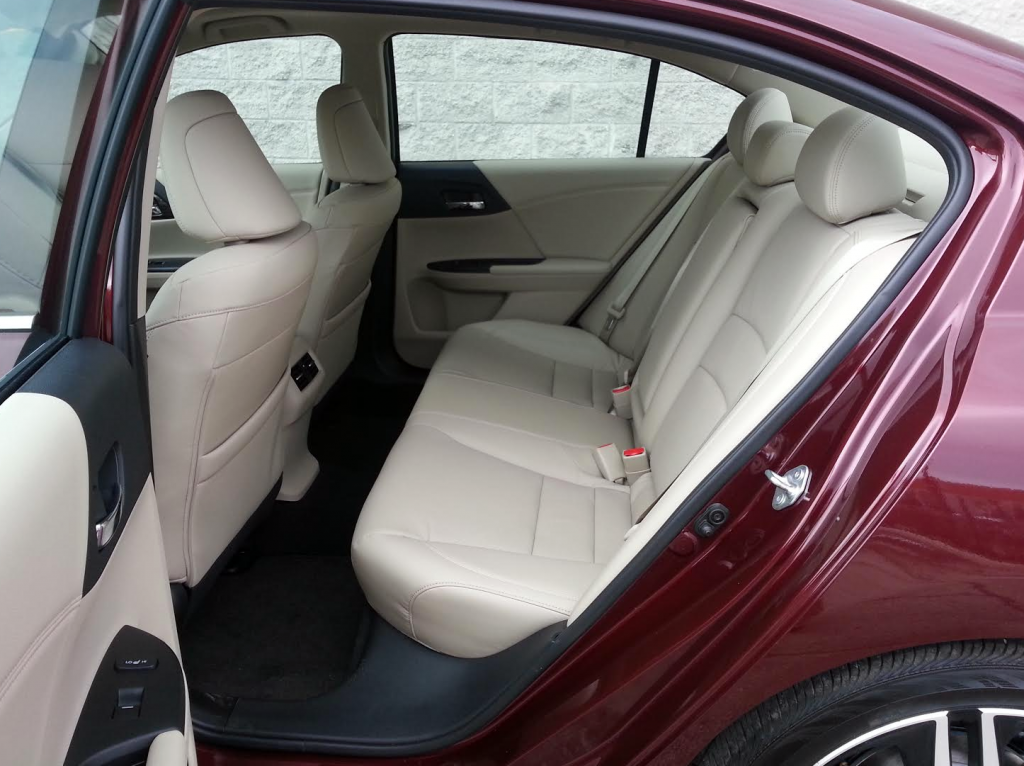 Rear-seat space is sufficient for most adults in Accord sedans, though knee room becomes dear when situated behind taller front-seat passengers.

The Touring has the smartphone-enabled HondaLink system for accessing things like personal music and podcasts. Users can control this by touch, pinch, or swipe on the 7-inch display screen. Also included are Apple CarPlay or Android Auto connectivity, satellite radio, and HD radio. Setting up radio presets on the screen isn’t quite a snap, and it’s a lot easier to do things like change stations or alter volume via the steering-wheel thumb buttons than it is to pick around on the screen, but at least Honda has avoided going to one of the dreaded tap-and-turn (or is that twist-and-shout?) console controllers.

CG’s test Touring showed off more plushness, too. Seats were dressed in a soft perforated Ivory leather that offered a nice contrast to the black upper-door and dash surfaces. Woodgrain highlights on the instrument panel and doors lent an upscale air. The provisions for the standard moonroof didn’t leave this driver short of head room, and rear-seat passengers are not affected by this feature at all.

In most other respects, the Touring is like other Accords. Driving controls are large and legible, outward vision is very good, and there’s decent adult-size leg room in both rows of seats. Personal-item storage in the cabin is about average but there’s enough of it to be useful. So, too, trunk space. The opening is wide, and the flat floor is full-width at the rear of the car, but narrows behind the rear seat where wheel houses intrude. Gooseneck hinges take up some space in the trunk area, too. Folding rear seats are split 60/40 with release levers in the trunk. However, when lowered to expand cargo capacity, the seats rest a few inches above the height of the trunk floor, and a bulkhead reduces the size of the pass-through. 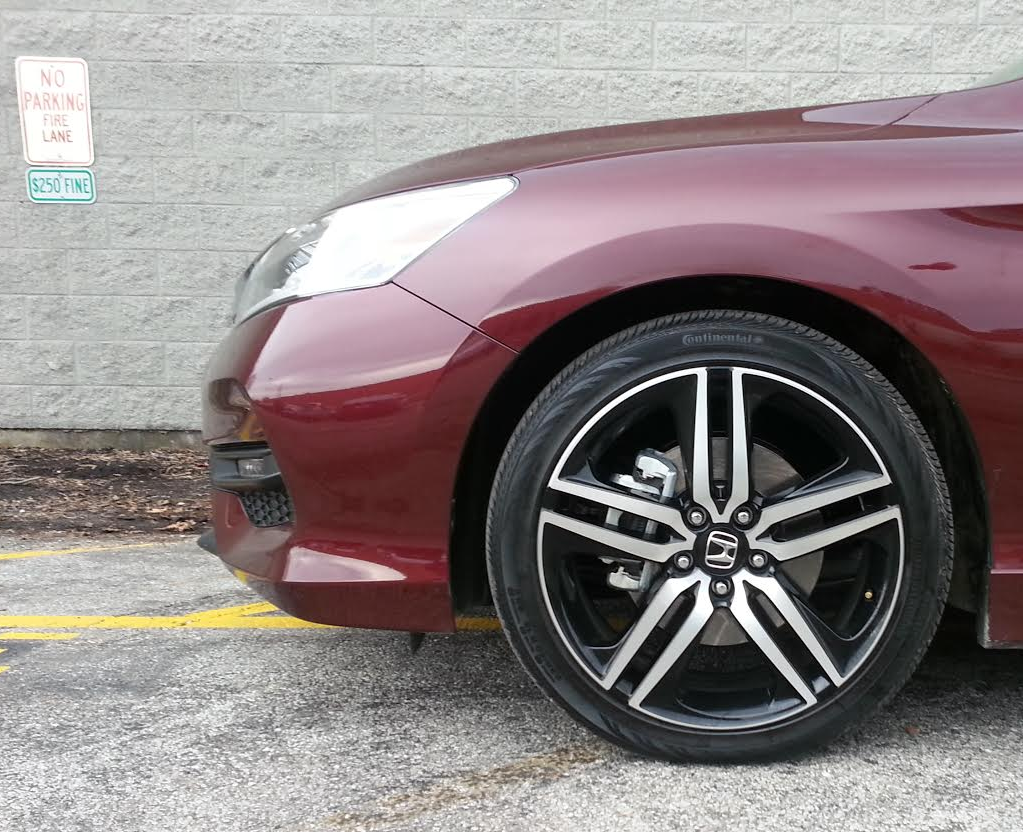 These 19-inch alloy wheels come only on Sport and Touring models.

The Accord Touring justifies its spot at the top of Honda’s midsize-sedan lineup by offering a compelling mix of performance, luxury, and everyday practicality. And, given its level of comfort and convenience features, it’s also a pretty good value; it’s nice enough to be a worthwhile alternative to premium-brand midsize sedans.