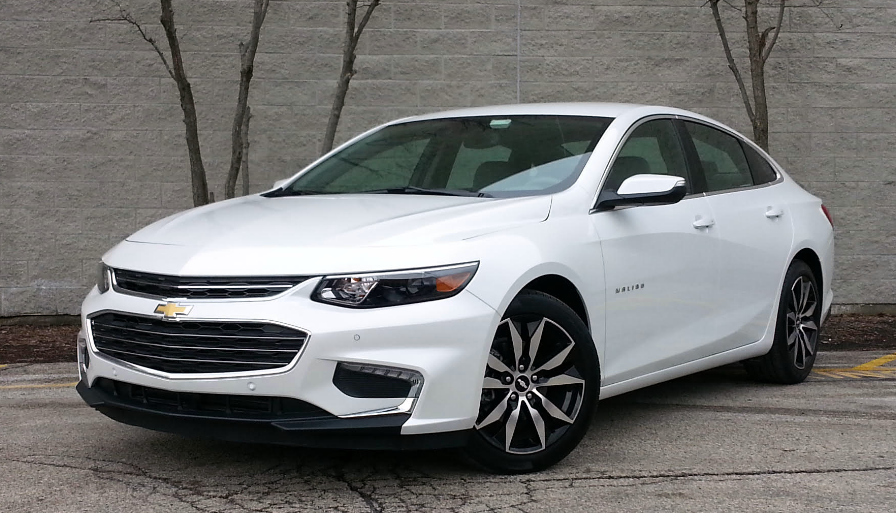 Fitted with an extensive list of high-tech safety features, the tested 2016 Chevrolet Malibu 2LT came in at $30,490 including destination.

The not so good: Trunk hinges dip into load area, folded rear seat back doesn’t rest level with cargo floor 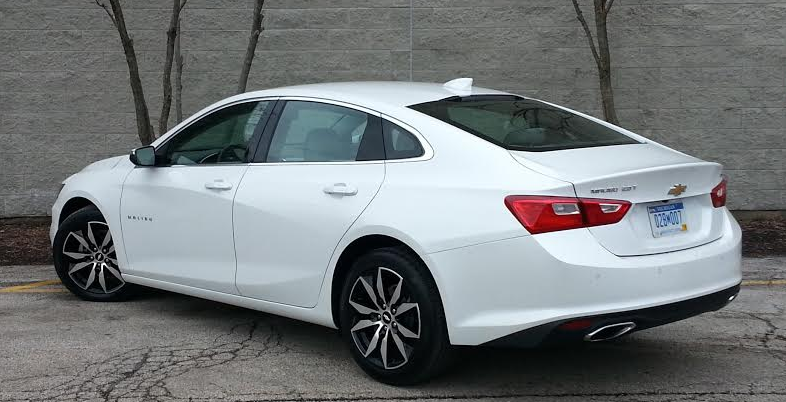 Visibility is quite good thanks to fairly narrow roof pillars.

The amount of power and the level of tech available varies by how much the buyer of a 2016 Chevrolet Malibu chooses to spend, but no matter how big the monthly payment, there’s a lot of space in the completely redesigned midsize sedan.

Chevrolet devotes 1.3 inches of the new-generation Malibu’s 3.6-inch-longer wheelbase to legroom in the rear seat, addressing a complaint that dogged the outgoing model. The added space lets front-seat passengers track pretty far back before they even begin to put the squeeze on rear occupants—and if they don’t need all the available space, back-row passengers luxuriate in ample legroom for a midsize car. Plus, it’s not impossible to imagine three adults fitting across the rear seat. There’s just enough headroom to accommodate an averaged-sized grown-up in the middle position, and enough foot space to allow that ’tweener to straddle the central floor hump without stepping on his neighbors’ blue suede shoes. If anything is wrong with rear-seat comfort, it’s a backrest that’s a little hard and unyielding.

That significant improvement is found throughout the four-tier ’16 Malibu family. Actually, make that 4.5-tier: Consumer Guide® tested a 2LT, the better equipped of two LT-level models. (Below the LTs are the base L and the LS versions, while at the top of the list is the Premier.) 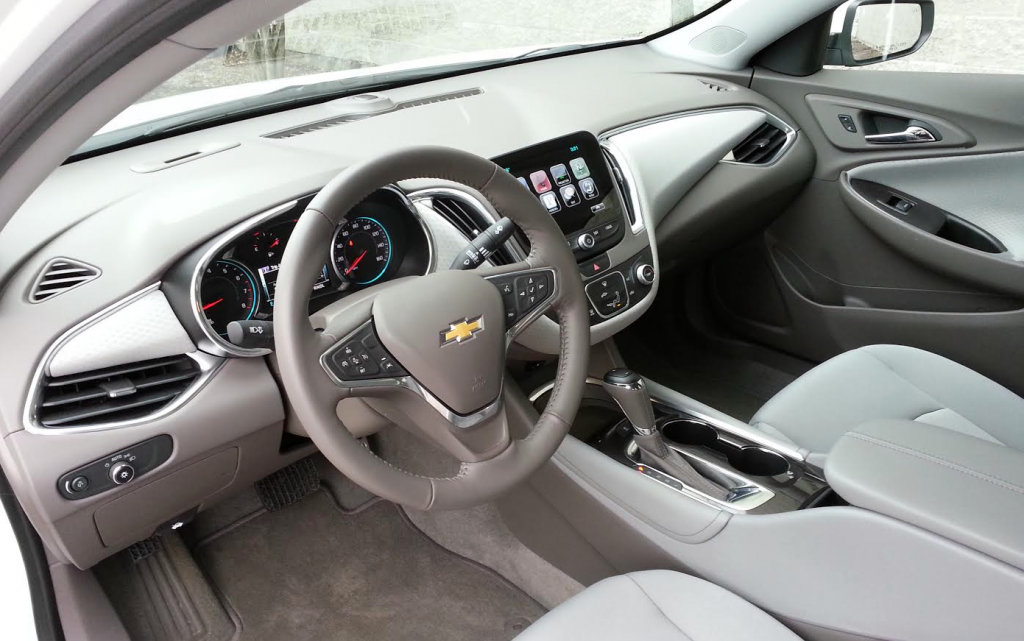 The dashtop may be hard, but adjusting the controls — both audio and climate — is quite easy.

Infotainment tech abounds in the new Malibu. These 2LT-specific standards come on top of 4G LTE Wi-Fi capability and Apple CarPlay. (Note that connectivity with the competing Google Android Auto system won’t be available for this audio system until early next year, but it will be possible to retrofit it to existing cars.)

The 2.0-liter turbo engine is rated at 250 horsepower. It does a good job of avoiding turbo lag in just about anything less than full-on, five-alarm acceleration. The eight-speed automatic behaves smoothly, and kicks down quickly when passing power is needed. Lugging around approximately 300 fewer pounds than the previous car, the ’16 Malibu with the 2.0/eight-speed powerteam is rated by the EPA at 22 mpg in city driving, 33 mpg on the highway, and 26 combined. This tester didn’t see quite that kind of fuel economy, scoring 21.17 mpg from a 150.7-mile stint that included 71 percent city-type driving.

There’s a stable and quiet “big car” ride to the Malibu. Handling is geared more toward ease than precision, though, with steering that’s a little short on feedback to the driver. 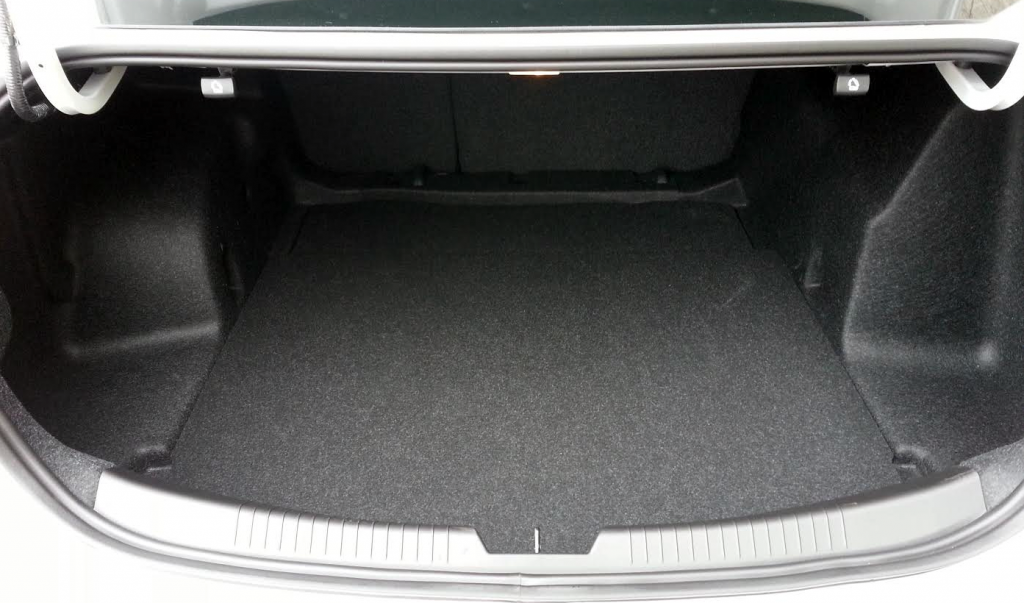 Overall, the trunk is quite spacious, and it’s wide at the rear. However, it narrows considerably between the wheelwells, and sickle-shaped hinges dip into the load area. Rear seat backs fold, but they rest a few inches above the cargo floor.

The new instrument panel presents legible dials, and a big driver-info display that can be scrolled with the help of steering-wheel buttons. Programming radio stations or summoning other functions on the touchscreen benefits from easy-to-use virtual buttons. Separate climate controls (everything below the Premier level comes with manual single-zone air conditioning) consist of convenient rotary temperature and fan-speed knobs, with clearly marked buttons for other functions. This tester’s voice commands were answered correctly—something that not even vehicles from prestige brands always get right.

Two-tone gray fabric covered the seats in the test car. The distinct pattern on the center of the cushions and backrests was continued on cloth facings found on the door panels and dashboard—an unusual touch. Bright-trim highlights dress things up, too. While unpadded, the plastic atop the dash and upper door panels isn’t shiny or cheap looking. Overall interior ambience is pleasant. Over-the-shoulder and straight-back driver vision is pretty good, thanks to relatively thin rear roof panels, rear quarter windows, and a large backlight.

Interior storage begins with a wide but shallow glovebox that drops down quite far—possibly onto a front passenger’s knees. The console contains a large covered cubby, a tray at the front (under the various device ports), a tiny bin in the middle, and two cupholders. Rear passengers are offered a pull-down center armrest with cupholders molded in, and pouches attached to the backs of the front seats. All four doors feature map pockets with bottle holders.

The trunk is wide at the rear but narrows between the wheel houses. Overall space isn’t bad—there’s plenty of room for luggage or groceries. Note that sickle-type trunklid hinges intrude into the load area. The 2LT has a tire-sealing kit and pump in place of a spare tire, which leaves space in what would be the tire well for underfloor small-item storage. Rear seats fold in a 60/40 split, but when folded, they rest a few inches above the level of the trunk floor, which might complicate loading of some long objects.

With a good level of features for the price and plenty of interior room, Chevrolet’s midsize sedan may now be the right-size sedan for more shoppers in this class.

The redesigned 2016 Malibu cuts a rather dashing profile, and increased rear-seat legroom makes it a roomier family car.