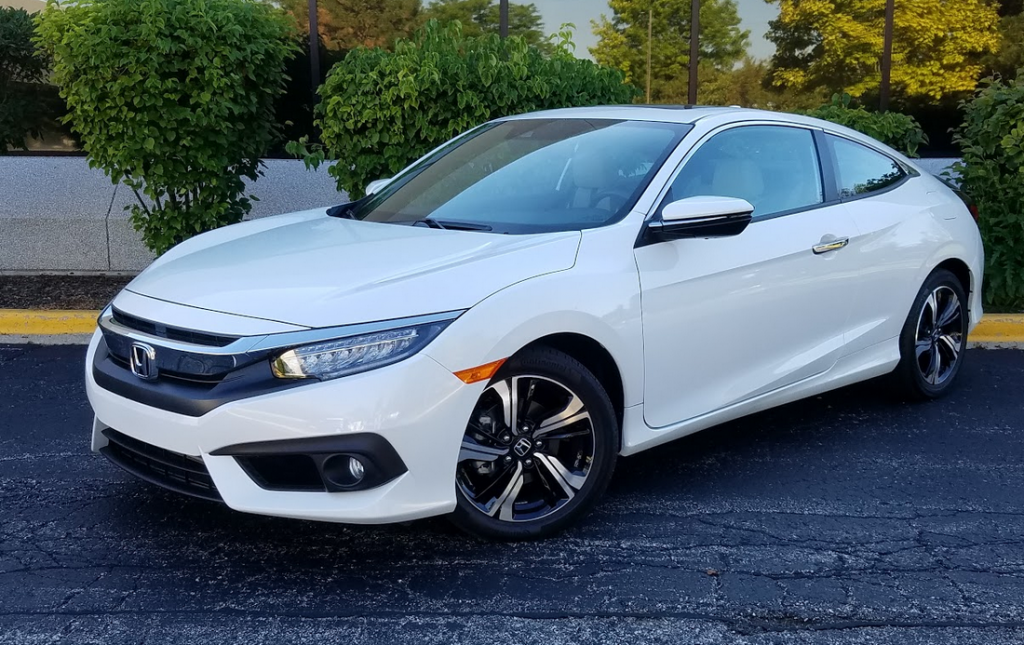 The great: Sporty looks, front-seat area is quite spacious for a coupe

The not so good: Tight rear-seat space, smallish trunk

Choices—we all face them in life. Often, having a choice is considered a good thing. If you’re shopping for a compact car, you have plenty of choices, and even if you’ve trained your sights on a Honda Civic you still get to pick: sedan or coupe.

The practical choice there is the four-door sedan, but the fun pick is the coupe. 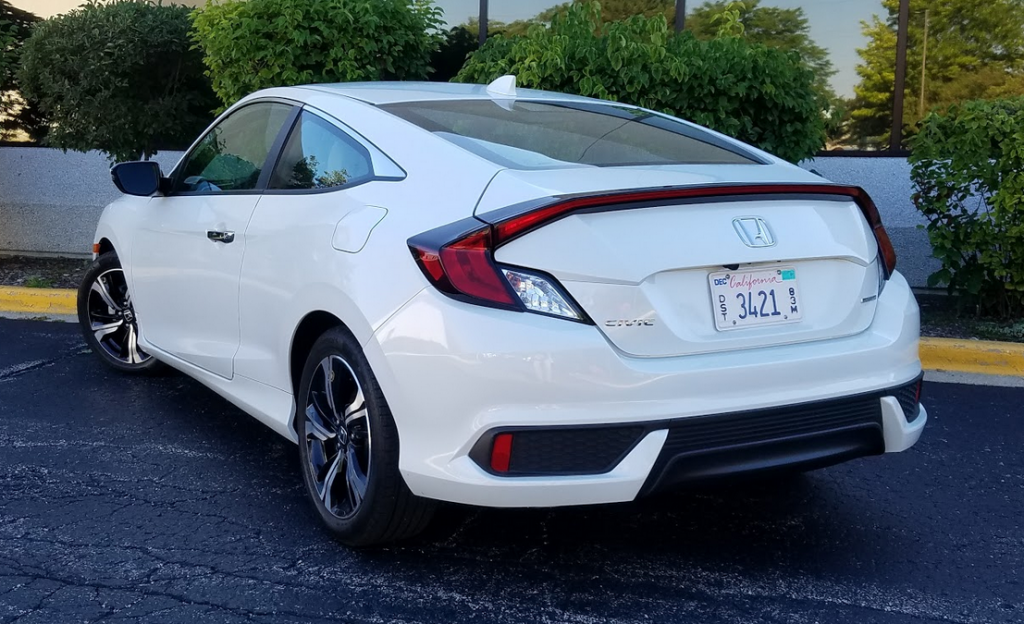 The Civic Coupe is more than five inches shorter overall than the Civic Sedan, and sits slightly lower as well.

Like the sedan, the two-door model is redesigned for 2016 with dimensional gains here and there compared to its predecessor. Wheelbase and front and rear wheel tracks are the same in both body styles, but the coupe is 5.4 inches shorter overall and .8 of an inch lower. As expected, the coupe sacrifices some headroom and rear-seat legroom (hiproom is fractionally greater than in the sedan, however). Also, trunk volume is reduced by 2.8 cubic feet in the coupe. A two-door Civic Touring like the one Consumer Guide® tested weighs in at 2888 pounds, 35 fewer than a comparably equipped Touring sedan—which might partly explain why the coupe’s suspension has narrower-diameter front and rear stabilizer bars. 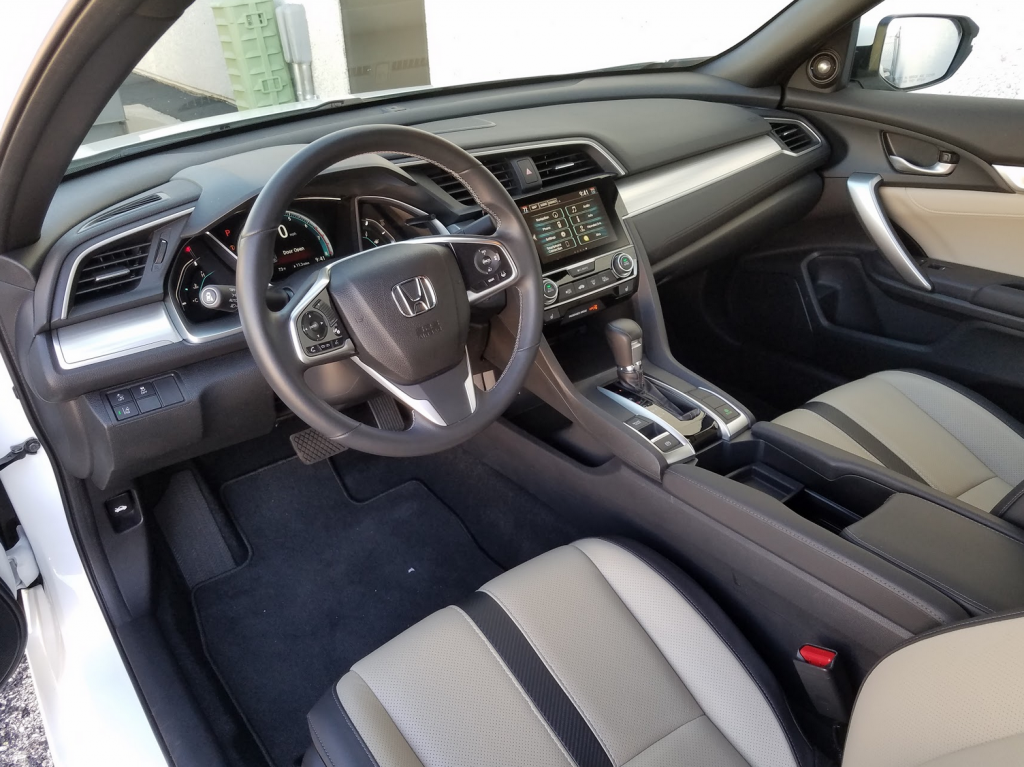 Big guys will find enough space up front, but tall occupants will wish for a little more headroom.

The effects of the coupe’s swoopy styling are especially obvious upon slipping into the back seat, which, by the way, is not too difficult thanks to a front passenger seat that tracks well forward at the flip of a lever. Rear passengers up to about 5’-10.5” (coincidentally the height of this reviewer) will find passable legroom—if sitting behind like-sized front passengers—but they won’t have a micron to spare in the headroom department. The Civic is listed as a five-passenger car but no way will it fit three adults across the back seat like the sedan just might in a pinch. Thanks to thin rear roof pillars, over-the-shoulder driver vision is still commendably free of obstacles even with the roof slope.

As noted, the coupe’s tail is a little stubbier, which makes for a less capacious trunk than in the sedan. It’s still big enough to hold a weekend’s worth of soft luggage for two. The floor is flat right up to behind the 60/40 folding rear seats, where a bulkhead slightly narrows the passage and raises the floor ever so slightly, so loading long objects may take some care. The seats fold pretty flat, albeit with a slight gap between them and the trunk floor.

The Touring is the heap-topper of the Civic’s six coupe models. Practically complete by Honda’s standards, it starts at $26,125 (add $835 for shipping), which is $375 less than a four-door Touring. It builds on features already present in lower-priced models but adds satellite-linked navigation with voice recognition, HondaSensing safety-alerts suite, HD radio, satellite radio, multiangle rearview camera, rain-sensing windshield wipers, LED headlights, chrome door handles, turn signals in the heated power mirrors, and a driver-information interface enhanced with the addition of a compass and turn-by-turn directions.

The Civic Coupe’s backseat area is probably better suited to function as an extension of the cargo area (via the handy fold-down seat backs) than to host passengers–unless those passengers are relatively small and nimble. 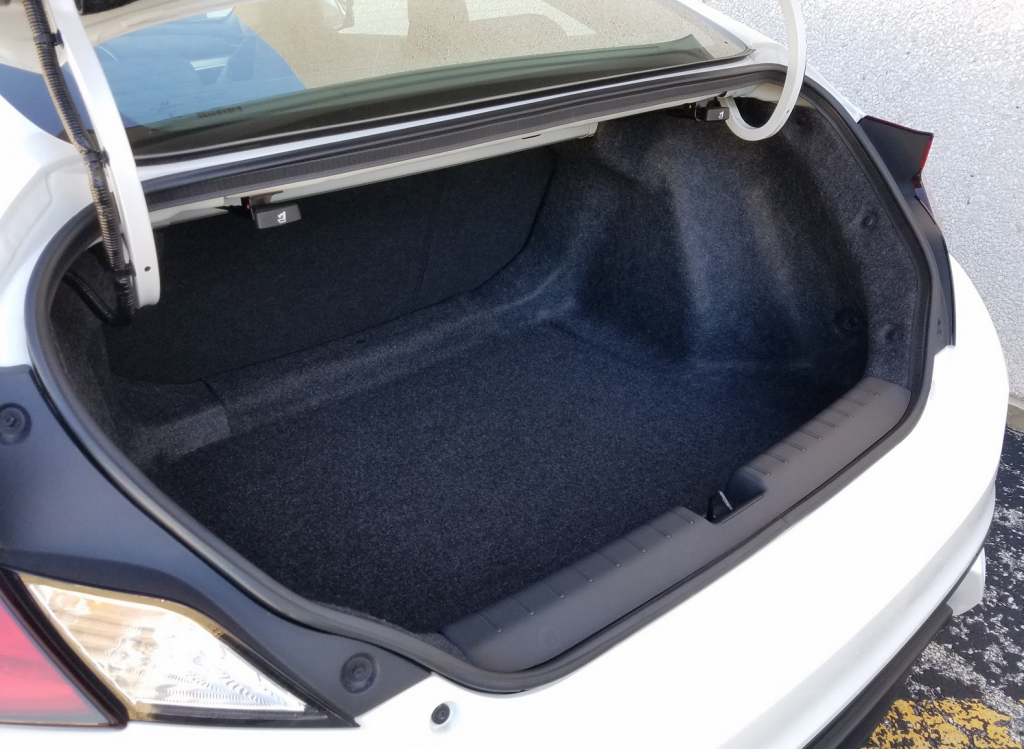 The Civic Coupe’s sporty styling takes a toll on trunk space; it gives up 2.8 cubic feet of cargo room to its sedan sibling.

The powerteam in the Touring is a new 1.5-liter turbocharged four-cylinder, the first turbo powerplant in a Civic, paired with a continuously variable transmission (CVT). The engine is rated at 174 horsepower and 162 lb-ft of torque. It moves the Civic coupe with some pace once the turbocharger kicks in. Climbing to cruising speed generates temporary groans (the CVT doesn’t help a lot here) but there’s easily sufficient safe passing and merging power on tap. EPA estimates for fuel economy are 31 mpg in city driving, 41 on the highway (the sedan is rated at 42), and 35 combined. This driver covered 158.3 miles in the coupe, 61 percent of that in city-type driving, recording a middling 27.7 mpg.

Steering is light yet responsive enough for easy maneuverability, which is aided in close quarters by the two-door’s shorter footprint. Still, it’s not exactly flingable enough to impersonate a genuine sports coupe. Uneven pavement degrades ride composure a bit.

The pearlescent White Orchid paint job on CG’s test coupe was paired with Black-and-Ivory leather seat coverings. Light-color hides on the front seats are perforated with dark accent strips down the middle. In back, though, the perforations and accent strips are deleted. Seats are comfortably supportive all around. Soft-touch surfaces cover the upper half of the dash and much of the door panels. While the two-tone look is continued on the side panels in the rear compartment, there’s nothing there but hard, grained plastic with no give.

Personal-item storage is all right up front but nearly nonexistent in back. The glove box is sizeable, and the partially exposed console box is cleverly configured—the two front cup holders can be removed to create more space. Door pockets provide a little more room for odds and ends. Rear passengers, though, get a cup holder and a very small open bin cut into each sidewall armrest—that’s it.

The 2016 Honda Civic coupe works pretty well, and it’s a nice thing in which to be seen. The Touring is near the top of the price realm for nonpremium compacts, which might make its passenger- and cargo-capacity compromises a little harder to swallow. However, with six varieties to consider, shoppers have that wonderful luxury of choice.

The Civic Coupe’s rakish fastback roofline gives it a much more sporting profile than its sedan sibling.