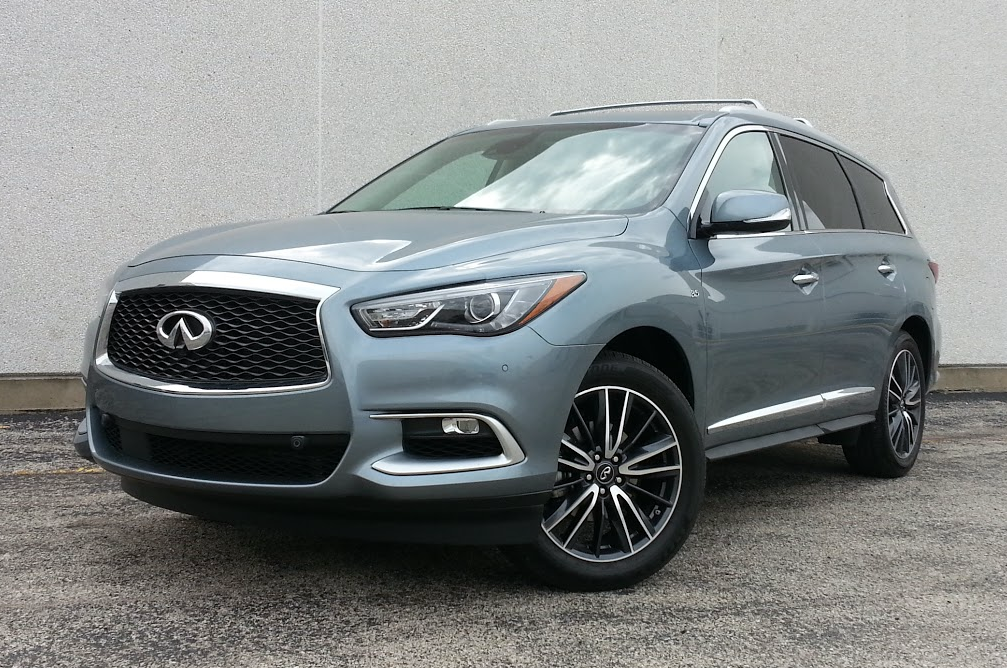 Flying or driving? So often these days that’s the choice confronting travelers—well, unless the destination is, say, Europe. If you choose to go with the aid of Infiniti’s midsize crossover sport-utility vehicle, you’re definitely driving more than you’re flying. 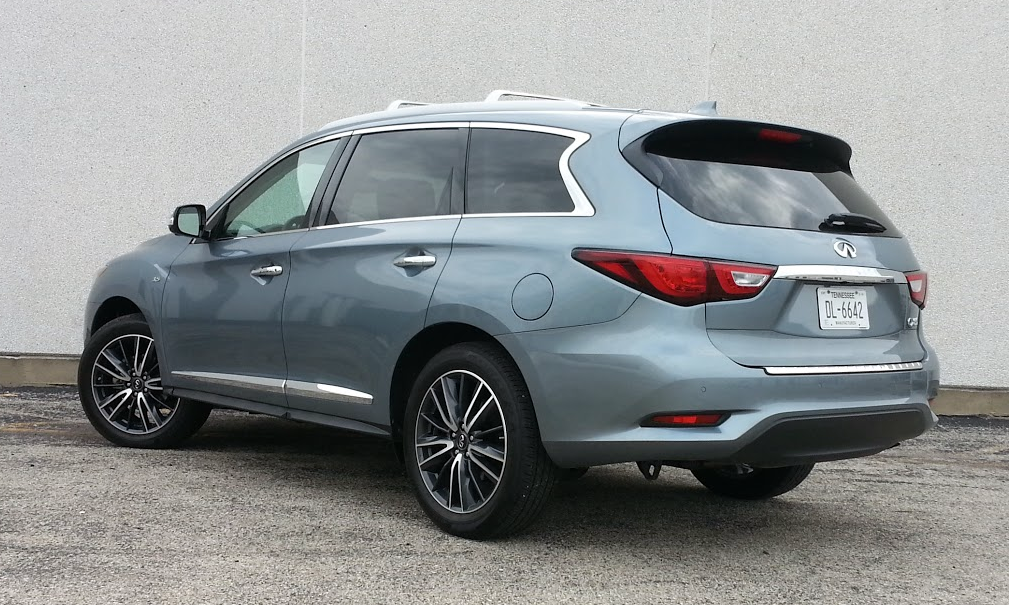 There’s nothing terribly wrong with the QX60’s 3.5-liter V6 engine. It idles smoothly and wouldn’t disturb a librarian even under determined acceleration. But with 265 horsepower and 248 lb-ft of torque, it’s nowhere near class leading. Consider that Consumer Guide®’s 2016 “Best Buys” in the segment, the Acura MDX and Volvo XC90, respectively make 290 horsepower from a 3.5-liter V6 and 316 ponies from a super- and turbocharged 2.0-liter four-cylinder. While the QX60 is a “Best of the Rest” pick, it trails the gas engines in the other five selections for power, too. 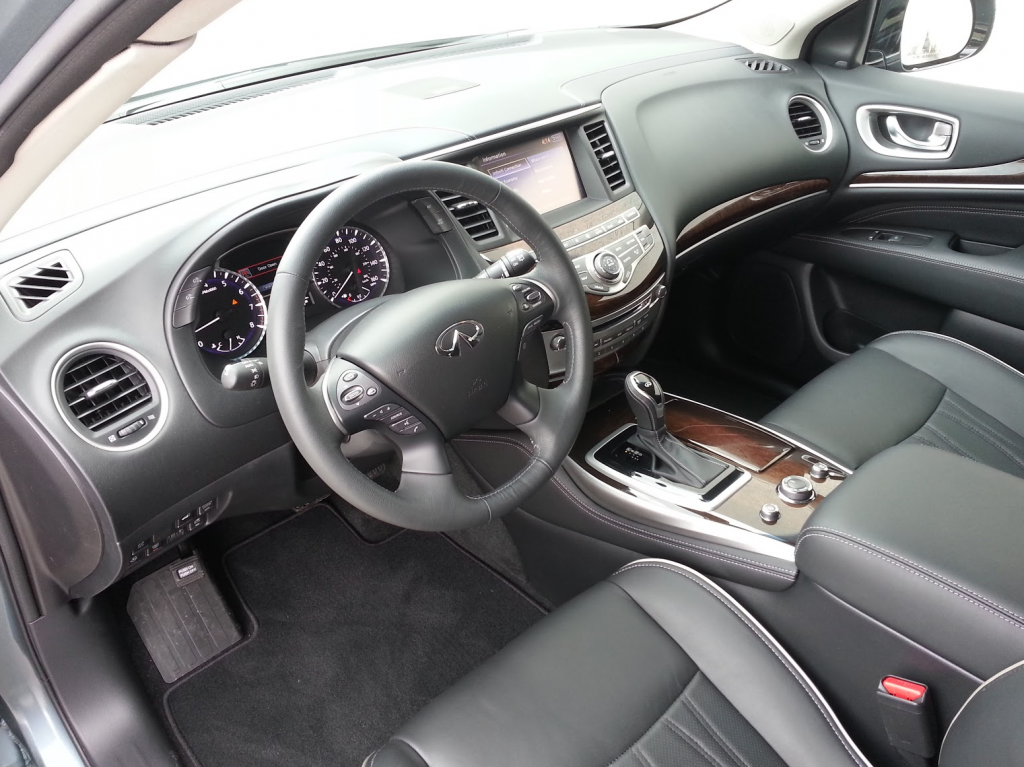 The QX60’s cabin is both roomy and plushly appointed.

Paired with a continuously variable transmission, the V6 QX60 gets around well enough for safe merging and passing, but if you’re not the kind of person who likes that “pressed back in the seat” feeling, then this may be the vehicle for you. Selectable drive modes—“Standard,” “Sport,” “Snow,” and “Eco”—modify throttle response and “shift” points but dialing in to Sport doesn’t make an appreciable difference, at least as far as this driver could tell during a 238-mile test drive. As for fuel mileage, he averaged an underwhelming 16.4 mpg, with 60 percent city-type driving. V6 all-wheel-drive QX60s like the one CG tried out are rated by the EPA to get 19 mpg in the city, 26 on the highway, and 22 combined.

In the absence of flying, there is some pleasant driving in the QX60. Nicely weighted steering is direct and responsive with little loose “slop.” Body lean is not excessive in cornering, so the body rights itself quickly after coming out of a turn. Ride shields passengers from fairly high percentage of jolts and jiggles (note that the test truck had the optional 20-inch wheels that some CG testers find detrimental to ride quality), and the brakes instill driver confidence without undue pedal effort.

While hybrid QX60s top $50,000, the starting price for the all-wheel-drive job that Consumer Guide® tested was $44,400, which represents an $1800 jump over a front-drive V6 model. That is certainly competitive with the other leading brands in the segment, especially considering that the Infiniti essentially comes in a single trim level, though option packages are available to dress it up. Indeed, CG’s sample vehicle was brimming with option groups ranging in cost from $1800 to $6900 for a bottom-line price—with delivery—of $58,845. 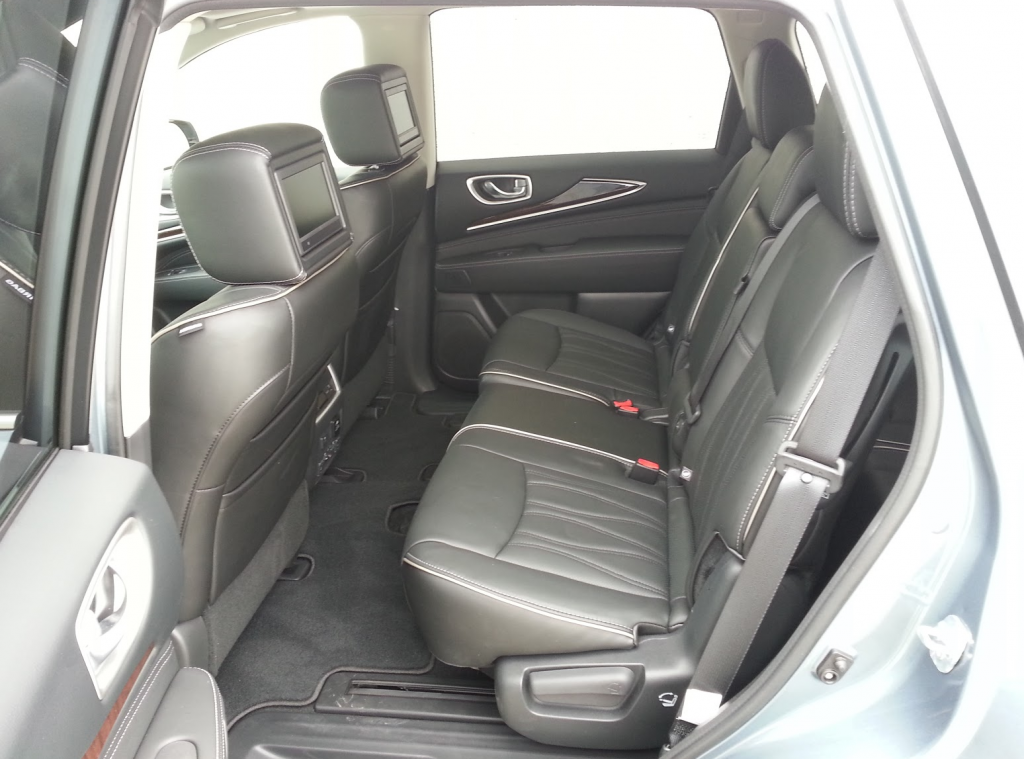 Most adults will find ample space in the QX60’s second row.

Controls are accessible and easy to use—notably the intuitive and direct audio controls that don’t get caught in that overly complex central-control vortex of hell into which so many other luxury brands have been sucked. The collection of buttons that governs climate control is tilted up slightly to be more convenient to reach. A decent amount of space has been devoted to the information display between the two large main speedometer and tachometer dials, but the display lies back at an angle that reduces its legibility.

Head- and legroom are best in front, pretty good in the middle row, and more restricted in the third row. The right-hand “40” seat in the 60/40-split middle row slides forward to provide access to the two third-row seats. The floor is flat enough—and the seat cushy enough—to allow three-abreast seating for adults in the second row, at least for short trips. Glass area is generous, but driver vision isn’t as good as it might be because of thick roof pillars all around.

The glove box is large, the covered console box less so. Door pockets in the front doors are smaller than those in the rear doors but all have bottle holders. Storage pouches are incorporated into the backs of the front seats. Cup holders are found under a pop-up door in the console, in the second-row pull-down center armrest, and in the sidewalls on either side of the third-row seats. The 50/50 third-row seats fold flat into the floor to open up good cargo space. (Power assists that return the seats to the upright position are included in the big-ticket Deluxe Technology Package.) For extra capacity, the middle-row seats fold quite flat even if they do rest slightly higher than the remainder of the load floor. 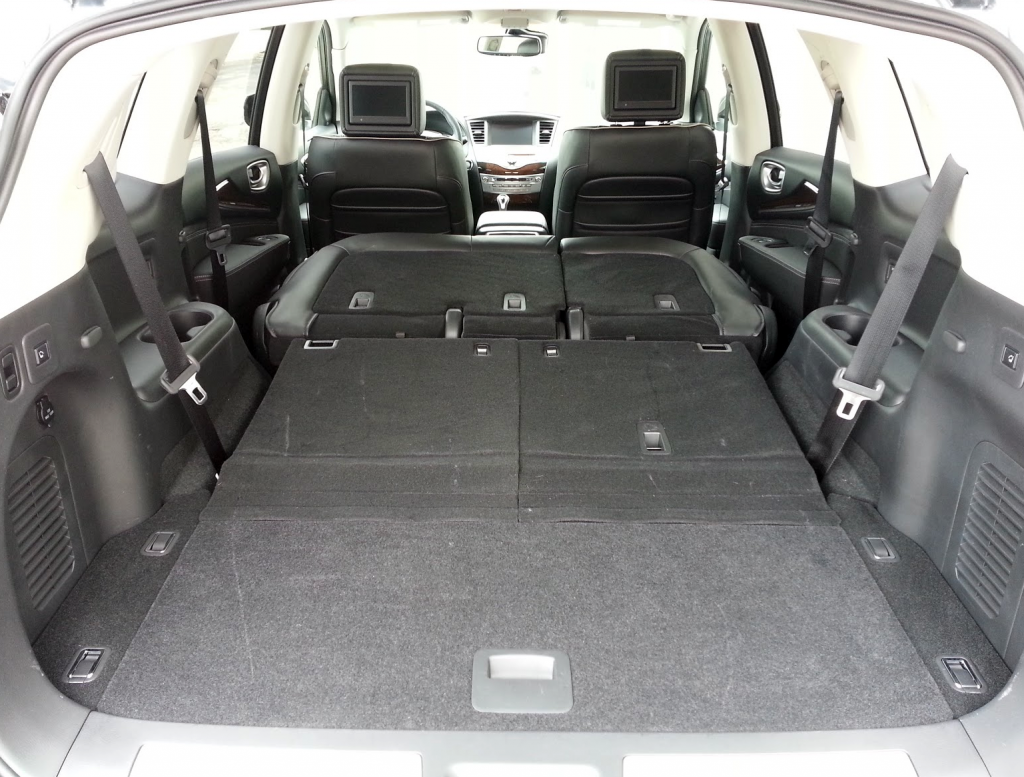 The second- and third-row seats fold flush with the load floor, opening up a large and easily accessed cargo area.

The 2016 QX60 is touched up with some styling revisions, notably a diamond-pattern grille texture and some reshaping of the liftgate and rear bumper. It also boasts “world first” autonomous emergency braking to avoid or mitigate rear collisions (another part of the big tech package). If you’re not the type who is inclined to be bothered that the neighbors’ SUV might have more horsepower than yours, then you might be open to taking a flier on this Infiniti. 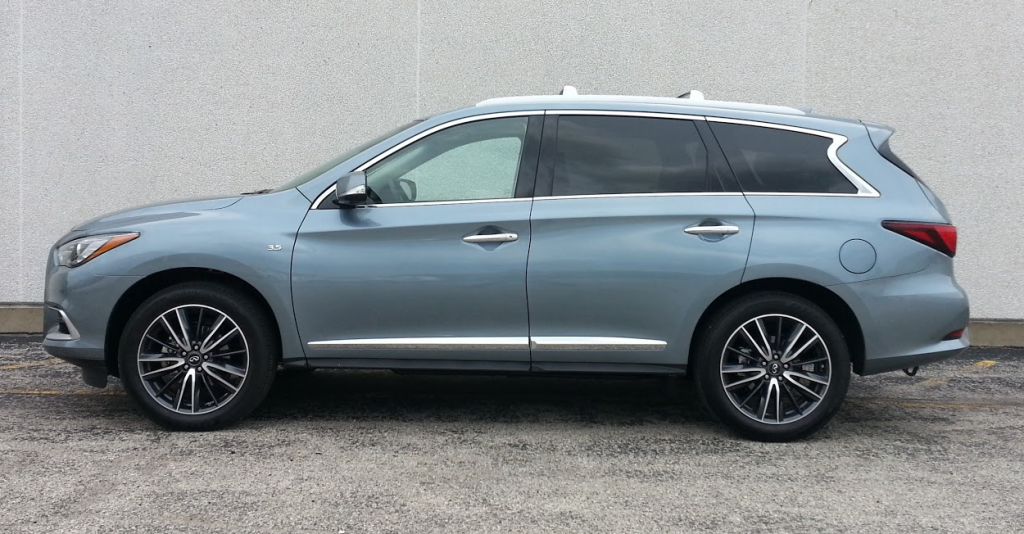