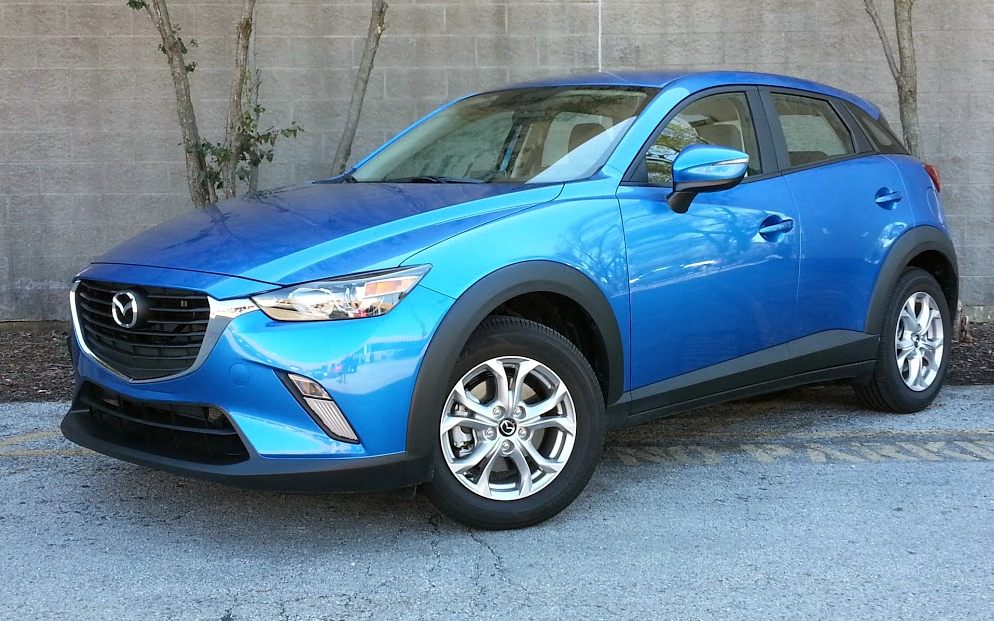 The not so good: Limited rear-passenger and cargo space

The 101.2-inch-wheelbase CX-3 comes in a choice of front- or all-wheel drive and in 3 trim levels. At the far ends are the base Sport and the premium Grand Touring. In between is the Touring that Consumer Guide® tested. 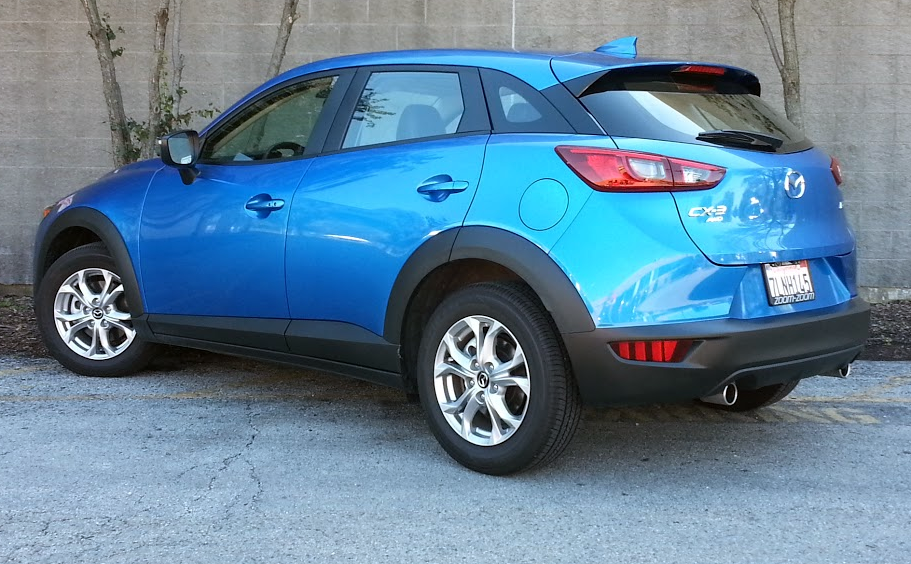 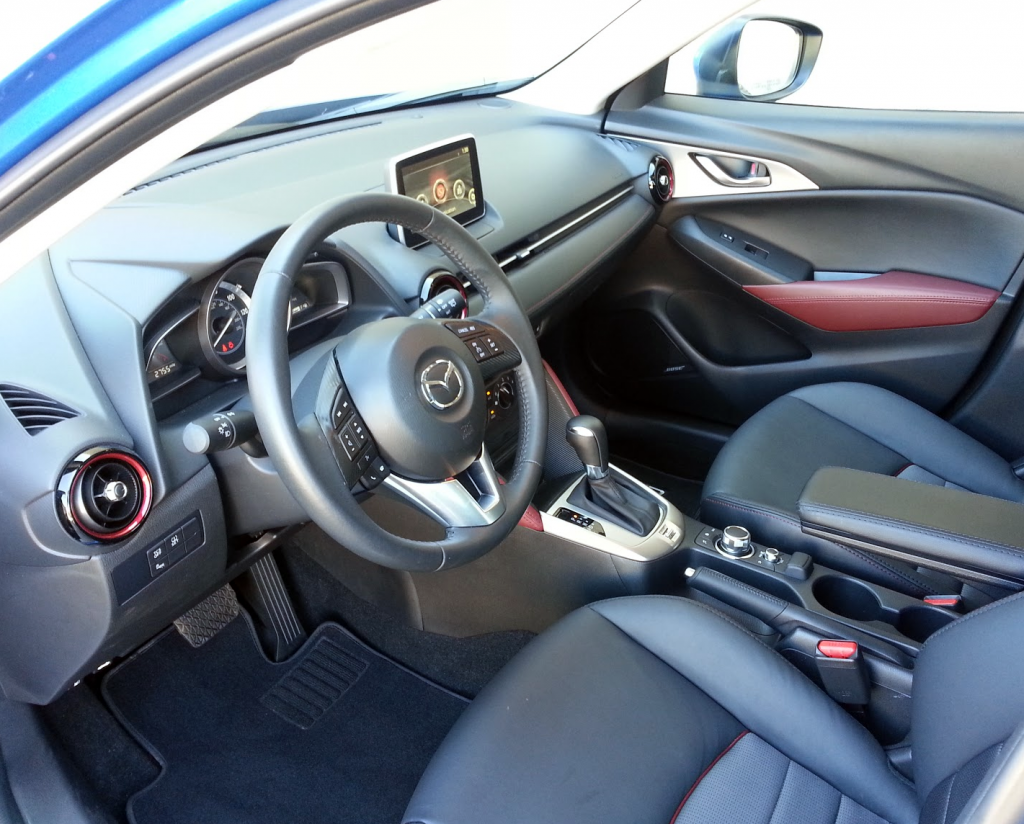 Editor John notes that the CX-3’s tidy, nicely finished cabin closely emulates that of the Miata.

The dohc powerplant generates 146 hp at 6000 rpm and 146 lb-ft of torque at 2800 rpm. The engine came off as loud and a little rough under determined acceleration, but it cruised demurely and never left this driver wanting for power despite its somewhat modest specifications. The 6-speed automatic also delivered good service. It comes with manual-shift and “Sport” modes. On a test stint of 170 miles that consisted of 65 percent city-style operation, this driver averaged 29.6 mpg—about on track with the AWD CX-3’s EPA estimates of 27 mpg city/32 mpg highway.

Ride feels nicely planted over road undulations, and the CX-3 returns to level in a hurry without a lot of extraneous motion. However, pavement cracks and other severe surface blemishes may get the back end of this little vehicle to jump with a jolt. Handling is pleasingly easy and steering responds well to driver inputs. Braking is good, too.

Inside, the dash layout has a touch of new Miata appearance. As in Mazda’s redone sports car, there’s a padded band with contrast stitching running through the middle of the panel, an adjustable central climate-system vent integrated into the prevailing dash styling, and a stand-up touch screen atop the center. Use of materials is a little Miata-like, too. Large stretches of the dash and door panels have a grained look that’s nice to the touch, but it’s essentially hard plastic with no underlying give. True soft-touch material is more or less confined to the tops of the door arm rests and adjoining areas in the center of each door.

Controls are readily at hand in the CX-3 cabin—it’s just working some of them that is complicated. Some CG testers—this one among them—have chided the byzantine operation of Mazda’s infotainment system through the relatively new console-dial Commander Control. Setting audio presets is a good example of how prickly the system is. Why, when you go through the trouble of scrolling to the station you want to save, then scoping out a place to save it, do you have to tap a dial again to call up a prompt that asks you to confirm—by tap—that you wish to add this station? Also aggravating is seeing the system prevent you from saving a station at a particular spot in the presets queue if the same station is already saved at another location. To get the station where you want it (and not where the car thinks it should be), you first have to find it and delete it from the place you no longer want it to be. What next—a retinal scanner to verify that the person selecting radio stations has the proper security clearance to access this sensitive information? Boy, we wouldn’t want that to fall into the wrong hands. . . . At least Mazda kept the climate controls 3-dial simple. 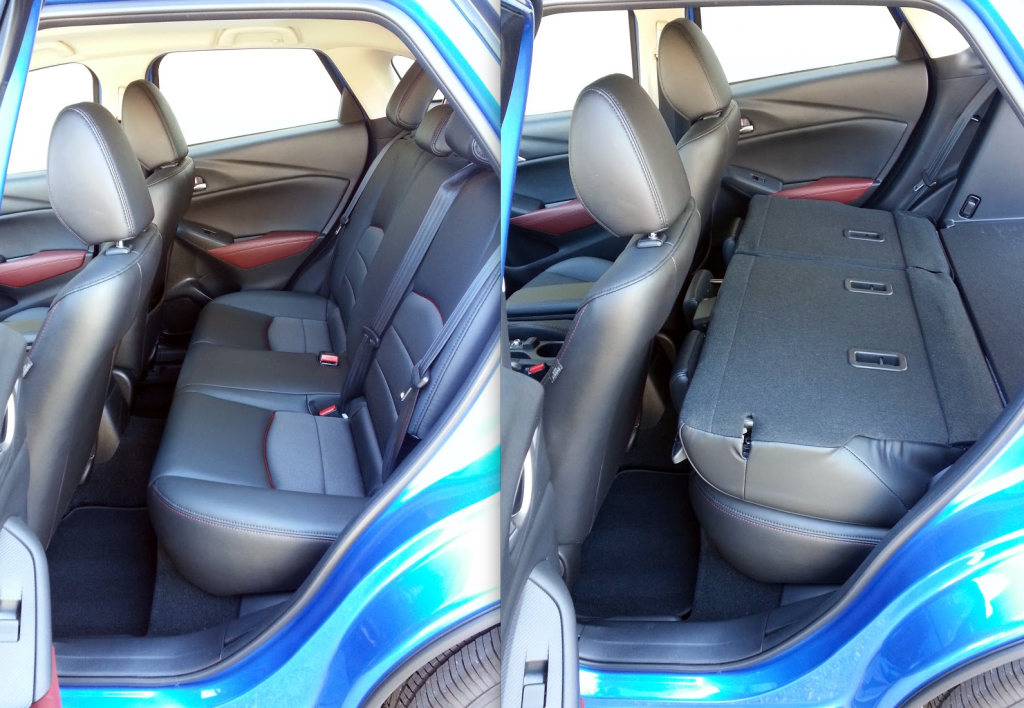 Passenger room is pretty good in the front row but not so much in back, where 2 adults—maybe 3 kids—will be cramped if front-seaters need lots of seat travel. Rear head room is not so ample under the sloping roof, and visibility to the rear corners suffers a bit from this design.

Personal-item storage is just so-so. The glove box is helpfully large but the rest in front consists of small door pockets with bottle holders, 2 open cup holders in the console, and a small open bin under dash next to the digital-device plug-ins and power port. The 2nd row has just one pouch (on the back of the front passenger seat) and a bottle holder in each door.

The smallish rear cargo area loads over a slight lip instead of the straight-in bumper-height loading found in most SUVs. To expand cargo capacity, the rear seats fold not quite flat but there is a smooth, undivided transition from the rear cargo floor.

On balance, the CX-3 is fairly fun to drive and comes with the features that most modern owners expect. Better yet, it does this at low-$20,000s starting prices, even for a middle-trim model.

Loading cargo into the hatch area of the CX-3 means lifting items over a relatively high lip. Overall cargo space is limited.