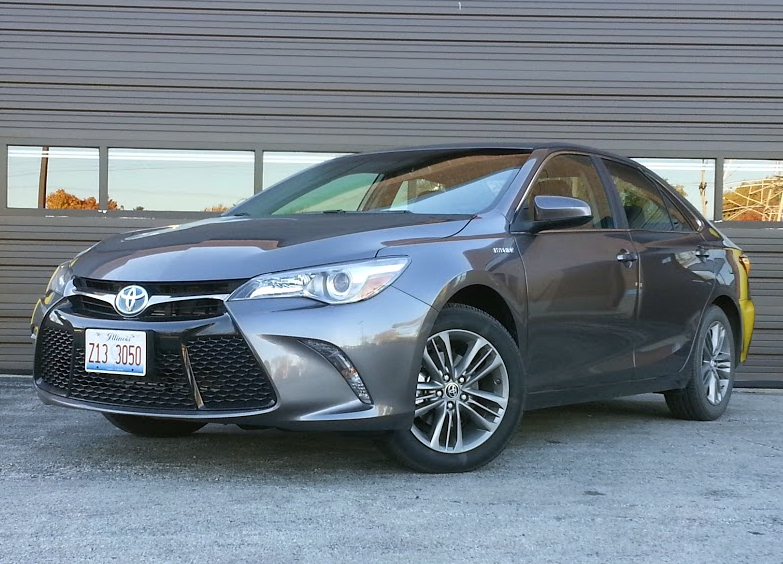 The not so good: Trunk space compromised by hybrid battery

Anyone who might have been pondering the purchase of a Toyota Camry Hybrid but couldn’t pull it off before his or her dealer ran out of 2015 stock can rest easy. The car comes back for 2016 practically the same way it was. 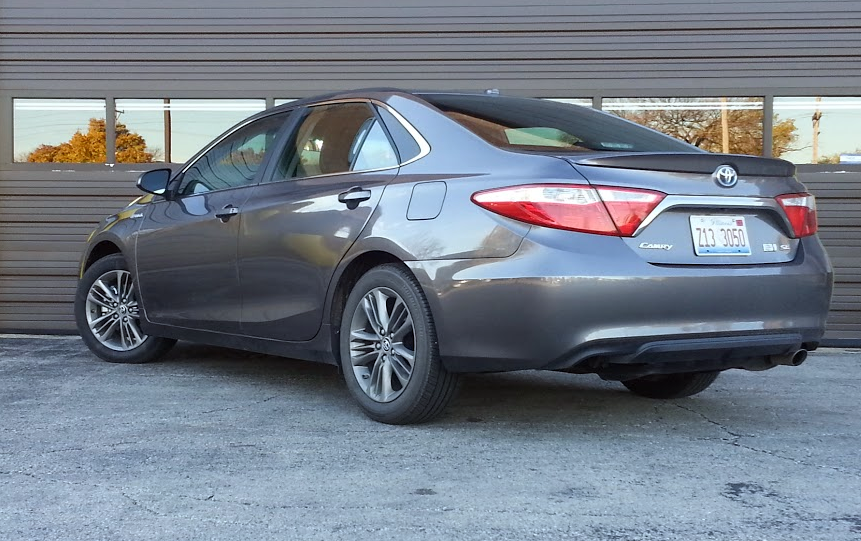 Camry SE models get a slightly sportier look via their dark-finish 17-inch wheels and decklid spoiler.

Consumer Guide® sampled a ’16 Camry Hybrid SE that was so like its ’15 test car that they even had the same $27,995 starting price. Except for a slightly revised roster of exterior-color offerings, one year’s Hybrid SE is just like the other. Of course, that brings the same high-mileage, long-range gas/electric powertrain. Driving dynamics, passenger accommodations, and equipment are familiar, too. 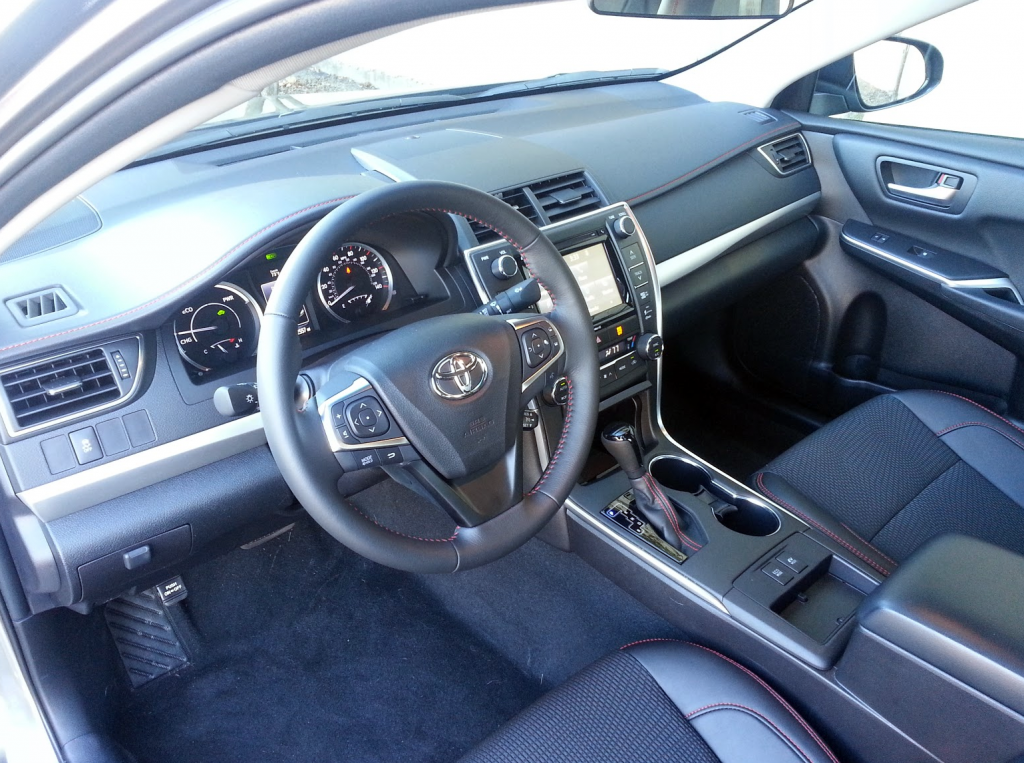 Like all Camry models, the Hybrid SE is nicely finished inside, and fairly spacious.

This tester averaged 40.3 mpg from a turn of 78 miles, 75 percent in city-style driving, and running a bit more in Eco than in normal. That’s a slight improvement on the car’s 40-mpg city rating from the EPA, and a little better than the 39.4 mpg he recorded on a more highway-intensive drive with the ’15 model. (Highway mileage is pegged at 38 mpg.) As such, the Camry Hybrid has a one-tank range of very nearly 600 miles.

Steering effort is on the light side but is still quite responsive. Good bump absorption from the SE’s sport-tuned suspension helps make for a pretty smooth ride. The 17-inch low-rolling-resistance tires make a little noise on the highway, though, and braking requires a lot of pedal pressure. 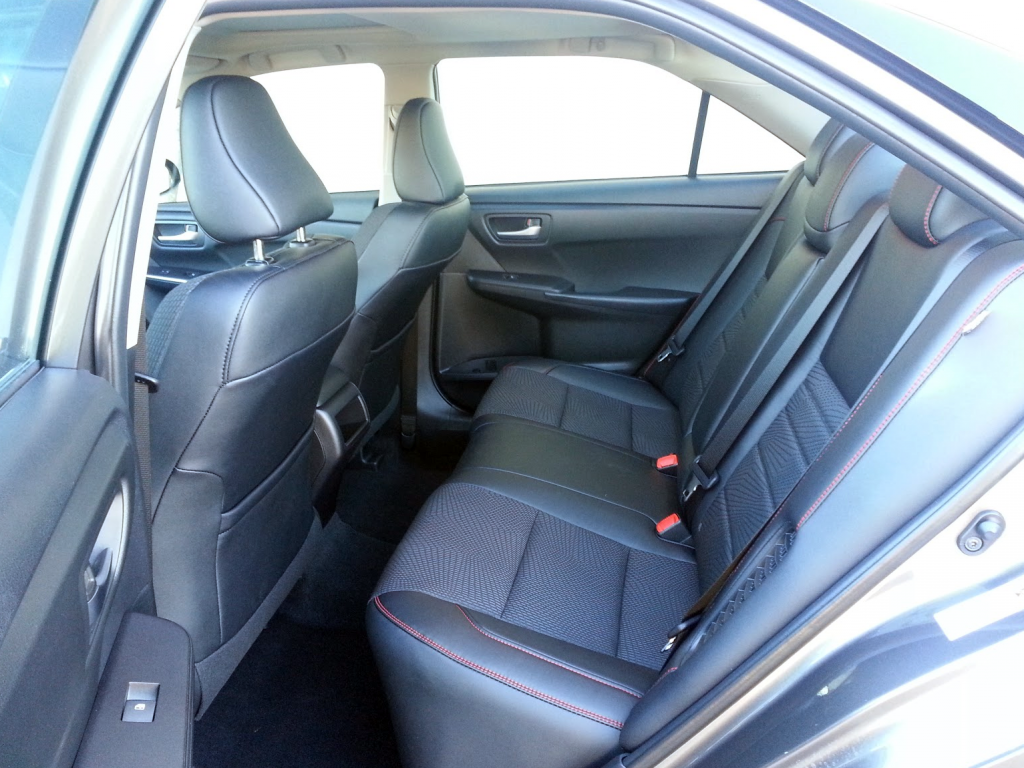 Seats dressed in “SofTex” imitation leather and textured cloth provide good support and long-drive comfort. Soft-touch materials cover the tops of the dash, doors, and arm rests, though molded plastic is still in evidence around the cabin. Dashes of bright metal provide some sparkle. Gauges are easy to read, as is the vehicle-information display. The audio system was intuitively simple to program with buttons and knobs around the touchscreen, though the upper right-hand tuner knob is a bit of a reach from the driver’s seat. Climate controls have their own display. Temperature is conveniently set by rotating dials; functions are activated by a few buttons, some of them repetitive-push.

Head and leg room are generous both in front and in back. Three adults could fit across the back—a low-profile floor hump helps here—though the middle passenger will be a little short of head room. Visibility is fairly good in all directions.

A small covered bin below the climate controls houses a power point, digital-device ports, and—when equipped—the wireless charger. The console sports two open cup holders, and a decently sized cubby under the arm rest. The glove box is wide and spacious. Doors have modest storage pockets with bottle holders. Rear passengers have the use of pouches on the backs of the front seats, twin cup holders in the pull-down center arm rest, and a small tray cut into the back of the console. 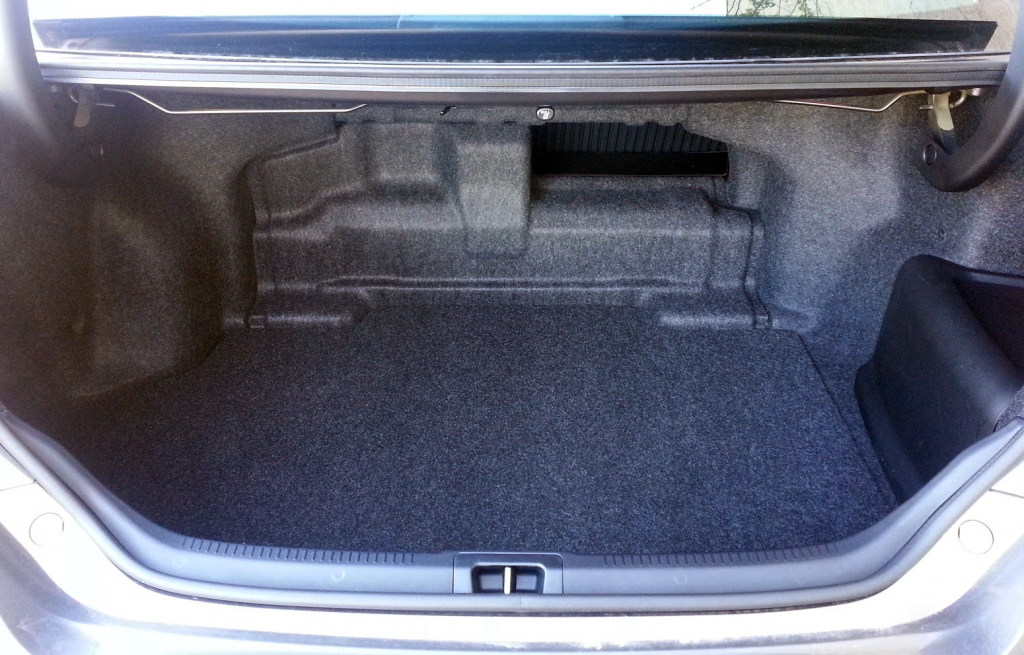 The Camry Hybrid’s battery is situated where the trunk pass-through is located in conventional Camry models. As a result, hybrid Camrys offer slightly less trunk space, and a smaller pass-through portal.

The shape and height of the trunk opening make loading easy, and the floor is wide and flat. The electric-motor battery pack housed just behind the rear seat trims 2.3 cubic feet of trunk space. It somewhat restricts passage to the lowered rear seat, which in the case of Hybrid models has a full-width folding seat back with a central pass-through.

If you’re a little late arriving at the coming-out party for this latest generation of the Camry Hybrid, relax; you haven’t missed anything yet.