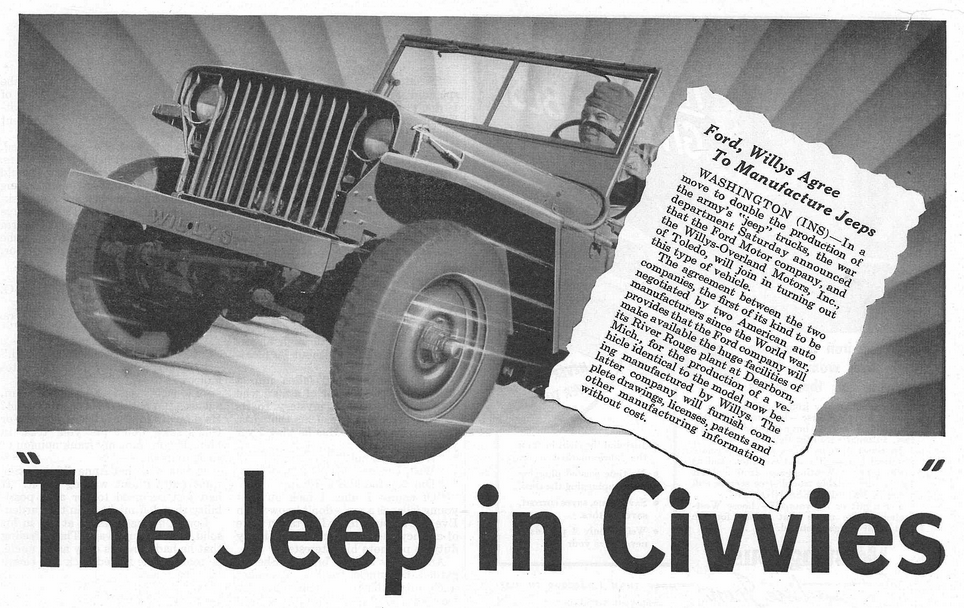 After serving the country admirably in World War II, the Jeep’s history as a production vehicle has been somewhat rocky.

Jeep is the Hope Diamond of the auto industry. Don’t get me wrong—I have nothing against Jeeps. They have always had great off-road prowess, and the original Jeep helped win World War II. But ownership of the Jeep brand has proved fatal (or at least bad luck) for all its corporate parents. Jeep has often found itself the profitable division of a failing company. Corporate acquisition of Jeep is like hiring Typhoid Mary to cook for your family—it won’t end well. 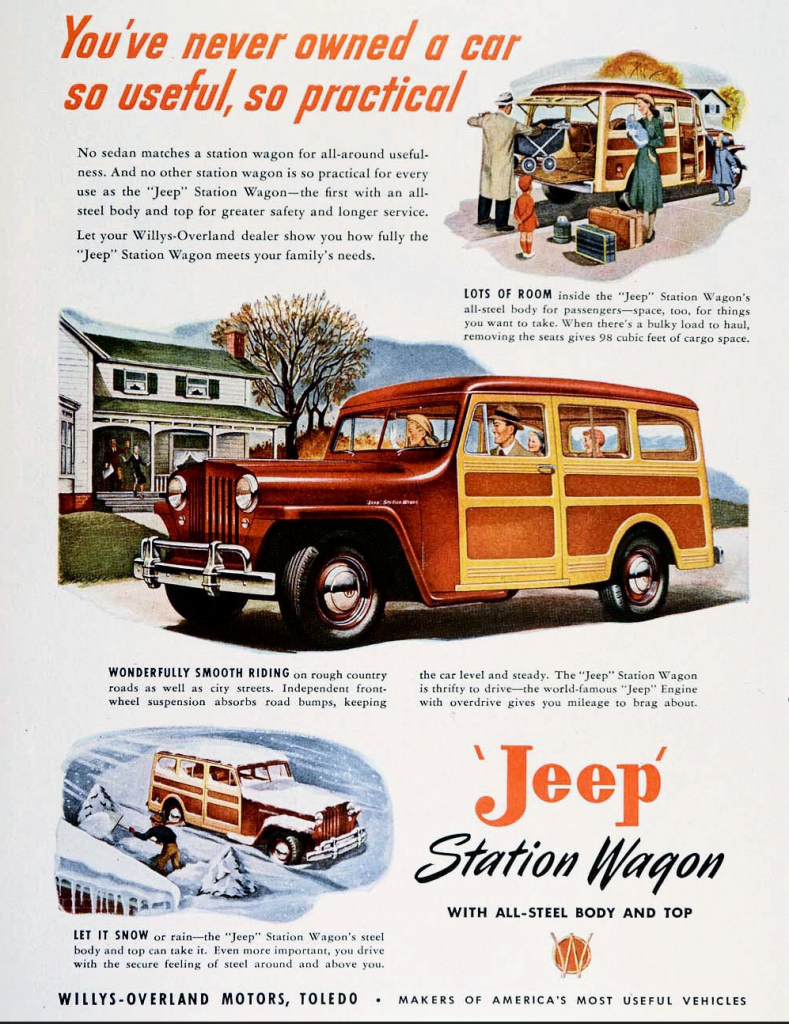 This 1947 ad appeared while Jeep was still a Willys-Overland property.

In 1940, the United States Army requested bids to design and build a light reconnaissance vehicle. American Bantam, the struggling maker of small economy cars, won the bid. However, the Army knew that the tiny Bantam company could never build Jeeps in the quantity needed. In the end, the main production contracts went to Willys-Overland Motors and Ford Motor Company. Bantam got a contract for only 2643 Jeeps, while Willys and Ford together built more than 600,000. It wasn’t fair to Bantam, but with war raging in Europe and America’s involvement imminent, the Army needed dependable sources for Jeeps. As a consolation prize, Bantam did get a contract to build Jeep trailers, and did so until 1956.

After World War II, Willys converted the Jeep to civilian use. Willys also tried to compete in the postwar car market with a small economy car. Selling cheap compacts during the Depression had proved a viable strategy for the company, but small cars were a hard sell in the prosperous early Fifties, and Willys was soon in trouble.

Henry J. Kaiser proved that America could mass-produce anything by building Liberty Ships faster than Nazi U-boats could sink them. Just as he had revolutionized shipbuilding, Kaiser was going show Detroit how to build cars. It proved too big of a job, even for Henry Kaiser. His operation was underfunded from the start, and after the postwar seller’s market ended, Kaiser found it difficult to compete with the Big Three. However, Kaiser did have enough cash to buy Willys in 1953. By 1956, Kaiser and Willys car production had retreated to South America. Jeep production continued at the Willys factory in Toledo, Ohio.

By 1968, Kaiser Industries had decided to concentrate on its other holdings and sell Jeep to American Motors Corporation. AMC was the last independent automaker, and it was waging a tough battle against the Big Three. AMC had its ups and downs over the years, but by the late Seventies it was in sharp decline. A recession delivered a knockout punch, and AMC was so desperate that it sought help from the French automaker Renault in 1980. The Franco-American alliance worked about as well as one would expect. AMC’s market share shrank to 1% as the Eighties progressed, and Renault was anxious to escape from the New World. 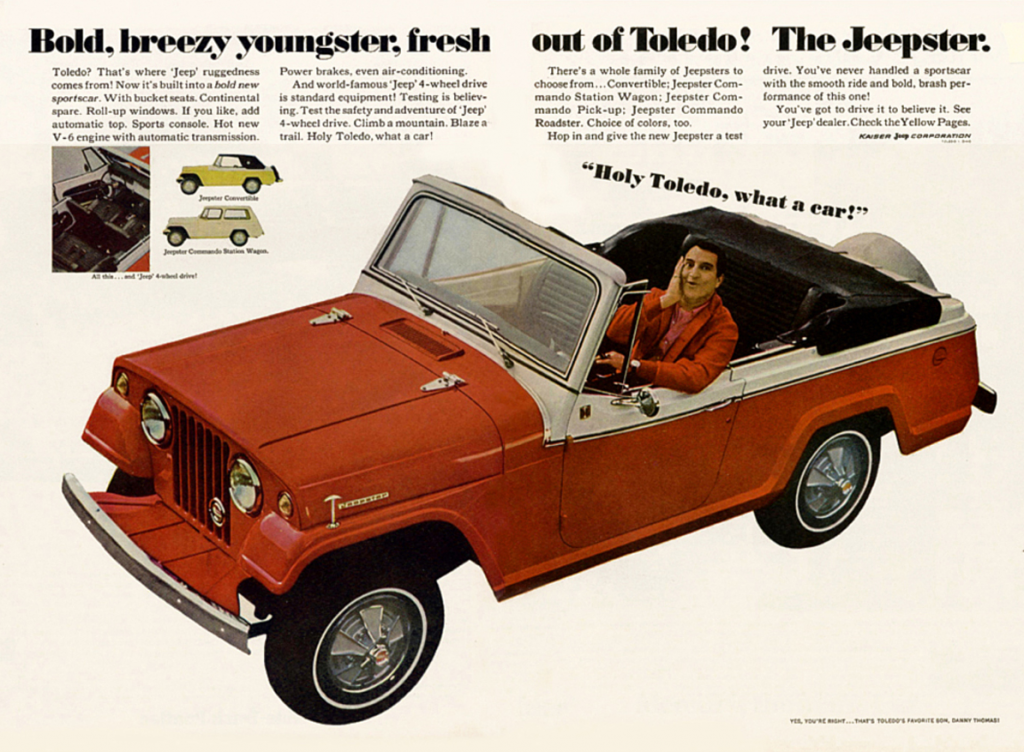 Kaiser controlled Jeep in 1967. The American Motors Corporation (AMC) would take the brand over in 1968.

A resurgent Chrysler Corporation desired a solid entry in the sport-utility market. So in 1987 Chrysler bought AMC, primarily to get Jeep. The remaining AMC and Renault cars were badged as Eagles, but that arrangement didn’t last long under Chrysler rule. Chrysler seemed prosperous in the Nineties, but its foundations were shaky. Quality issues and increased competition—along with a potential unfriendly takeover by wannabe auto mogul Kirk Kerkorian— spooked Chrysler CEO Bob Eaton into an ill-fated “merger of equals” with Daimler-Benz in 1997. 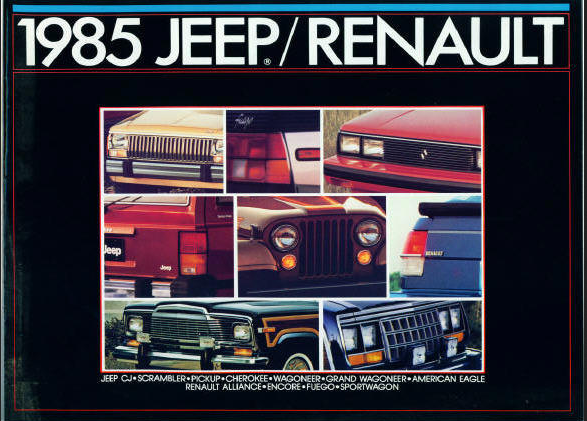 Though AMC was not yet phased out in 1985, Renault saw no need to reference it on the cover of this brochure.

Chrysler soon found itself in a dysfunctional relationship with Daimler-Benz. Chrysler was definitely the weaker half of the partnership. However, the dominant Mercedes-Benz brand also had problems, as its solid reputation for quality was rocked by electrical gremlins and other issues. Both companies suffered in their marriage, which ended less than amiably with Daimler convincing American equity firm Cerberus to take Chrysler off its hands in 2007.

Cerberus Capital Management was hoping to flip Chrysler for a quick profit, but the Great Recession of 2008 flipped everything.

In the wake of the 2008 financial meltdown, Chrysler needed a partner to survive. Italian company Fiat was the white knight that arrived in 2009. Fiat had previously pulled out of the U.S. market in 1983, saddled with a reputation for poor reliability. However, by 2006, Fiat was doing quite well in Europe under the leadership of CEO Sergio Marchionne. Fiat acquired a stake in Chrysler in the summer of 2009, after receiving significant help from the U.S. government. Fiat proved much better at managing Chrysler than Daimler did, and both sales and quality improved. Things looked rosy at first, with 60 months of sales growth and Jeeps selling as fast as the company could build them. But, Fiat Chrysler Automobiles has heavy debts to service, and needs funds to replace aging models. The company is now aggressively searching for a partner. It all sounds familiar.

Now a Fiat Chrysler Automobiles (FCA) property, Jeep is a global brand. The subcompact Jeep Renegade crossover is assembled in Brazil, China, and Italy, but not the U.S.

I wish Jeep well, I just hope that the next Jeep partner isn’t in my 401K portfolio.