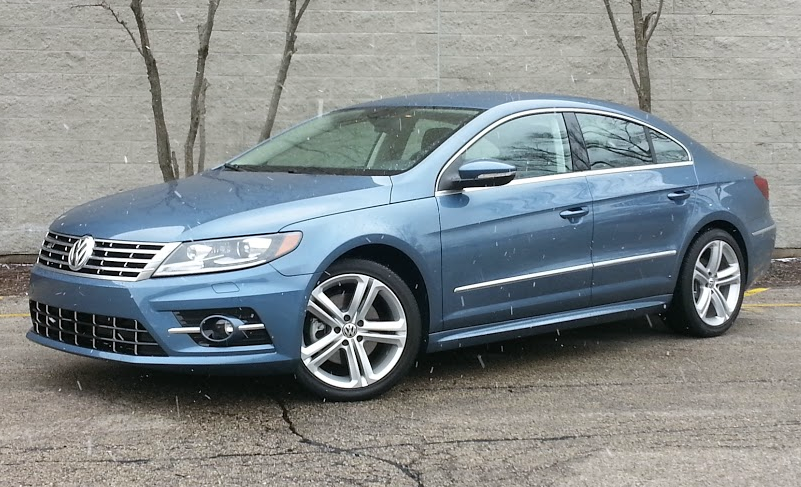 2016 Volkswagen CC 2.0T R-Line (in a rainstorm… the weather did not cooperate during our photo session)

The great: Luxury trappings at a mainstream price

The good: Fun to drive

The not so good: Difficult for larger folks to enter and exit, limited rear-seat headroom

The Volkswagen CC provides car shoppers with the chance to get a premium midsize sedan at a not-completely premium price.

The starting tab for Volkswagen’s entry in the curious “four-door coupe” niche can be as little as $31,750, thanks to a new-for-’16 Trend model, and offerings with a 2.0-liter turbocharged engine go up to $37,250. That keeps this VW towards the lower end of Consumer Guide®’s premium-midsize class. Only an all-wheel-drive V6 Executive job with a $44,355 sticker starts to sound like serious money. 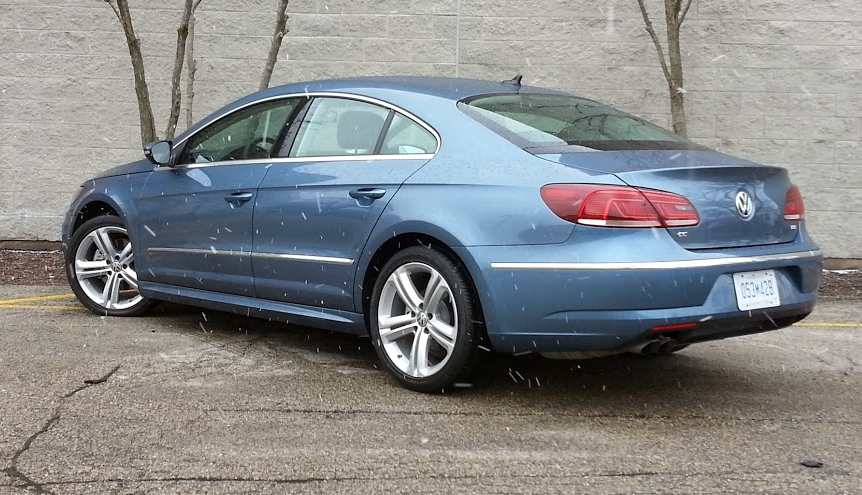 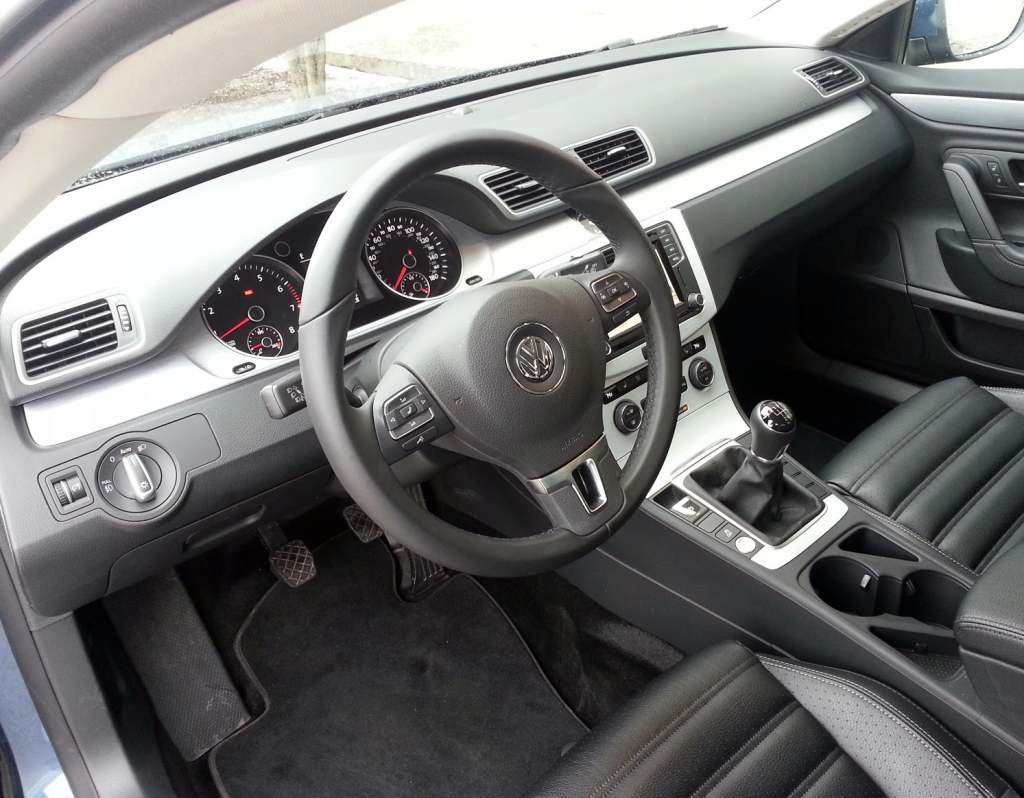 The newest thing about the 2016 R-Line is the updated Discover Media touchscreen. It was easier to tune and save audio presets than on audio systems in some other Volkswagens from recent years. Function buttons are stacked in “ears” on either side of the clear display. Meanwhile, climate controls remain a mix of convenient rotary dials and a few buttons located low on the center stack within easy reach of the driver.

The 200-horsepower 2.0-liter turbo four-cylinder delivers a good amount of power for confident merging and passing, and is fun to drive with the manual transmission. The shifter goes where you want it to on the first try, and the clutch makes no special demands on skill or stamina. This driver averaged 21.11 mpg after a test stint of 146.3 miles, 60 percent of which was under city conditions. That barely topped the car’s EPA city mileage estimate of 21 mpg—and it wasn’t as good as the 22.01 he got in 2013 from a turbo CC with a six-speed dual-clutch automated-manual gearbox.

With the R-Line’s 18-inch wheels road imperfections make themselves felt a little more forcefully than they might on a lesser CC with a smaller tire/wheel package. Otherwise, there’s a nice steadiness to the ride. Steering is light and fairly responsive, but it lacks major sport-sedan levels of feedback. Cornering lean is nicely controlled.

The cabin presents a comfortable and inviting environment. The dash top, upper door panels, arm rests, and door centers are padded soft-touch surfaces. Hard plastic on other interior surfaces has a satin look and feel. Generous applications of brushed metal perk up the instrument panel and console. Seats are supportive enough for long-drive comfort. 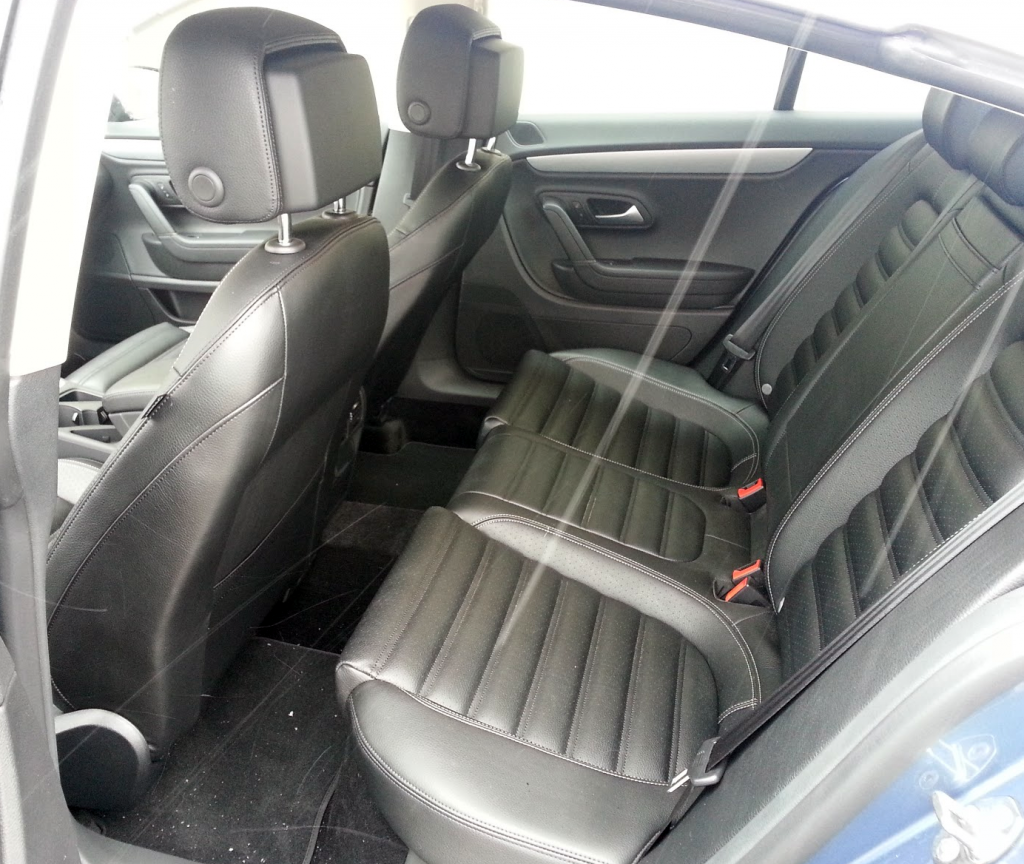 In addition to its limited headroom, the CC’s rear-seat legroom is average at best. The rear seat can accommodate three passengers, but the center-seat cushions are stiff and uncomfortable.

Legroom is good in front but perhaps just so-so for what’s technically a midsize sedan. Headroom is tight, more so for rear-seat passengers. Blame the low, sloping coupelike roof for that. That nod to style also results in small side windows that, along with thick roof pillars, crimp outward vision. Entry and exit also call for some agility, even from not-so-tall passengers.

Cabin storage is a mixed bag. The console box is deep, and the glove box has room for more than just the owner’s manual. Door map pockets aren’t all that big, though. Two tiny wedge-shaped openings fill spaces between the diagonally oriented twin cup holders in the console. Storage for rear passengers consists of pouches on the back of the front seats and a shallow covered storage bin in the pull-down center armrest. A pair of cupholders pops out from the front of the armrest.

The trunk opening is broad, and its flat floor extends far forward, but hinges swing down into the available cargo space. The rear seats fold in a 60/40 split to extend cargo capacity. The seats don’t fold completely flat but the transition from the trunk floor is still direct. With the center armrest down, a pass-through for long, narrow objects becomes available.

Frankly, I was expecting to be underwhelmed when I started my turn in our Volkswagen CC R-Line tester. The CC’s basic platform dates back to 2009, which is a heckuva long time in the new-car marketplace. It had been at least 4 or 5 years since I’d last driven a CC, and despite my positive impressions back then, I was doubtful that the 2016 CC would still measure up against its newer-design rivals.  Well, color me pleasantly surprised… the CC gives up surprisingly little compared to its competitors, and its basic concept continues to work quite well, thank you. The CC delivers a level of style and everyday athleticism that belie its Passat roots. The VW 2.0T four is still one of my favorite engines, and it’s paired here with a buttery-smooth shifter that’s quite satisfying to use in both daily-grind traffic and back-road corner carving. The suspension is supple enough to be compliant over most rough roads, but sporty enough to deliver crisp handling in spirited driving. The interior layout is clean and straightforward, with upscale details and a sport-sedan flair that truly set it apart from a workaday midsize sedan. Yes, the sloped roofline intrudes on rear-seat headroom, but it also goes a long way toward making the CC look and feel more expensive than it is. Few vehicles manage to hit that elusive sweet spot between performance and practicality; style and functionality; and luxury and affordability, but the CC does. 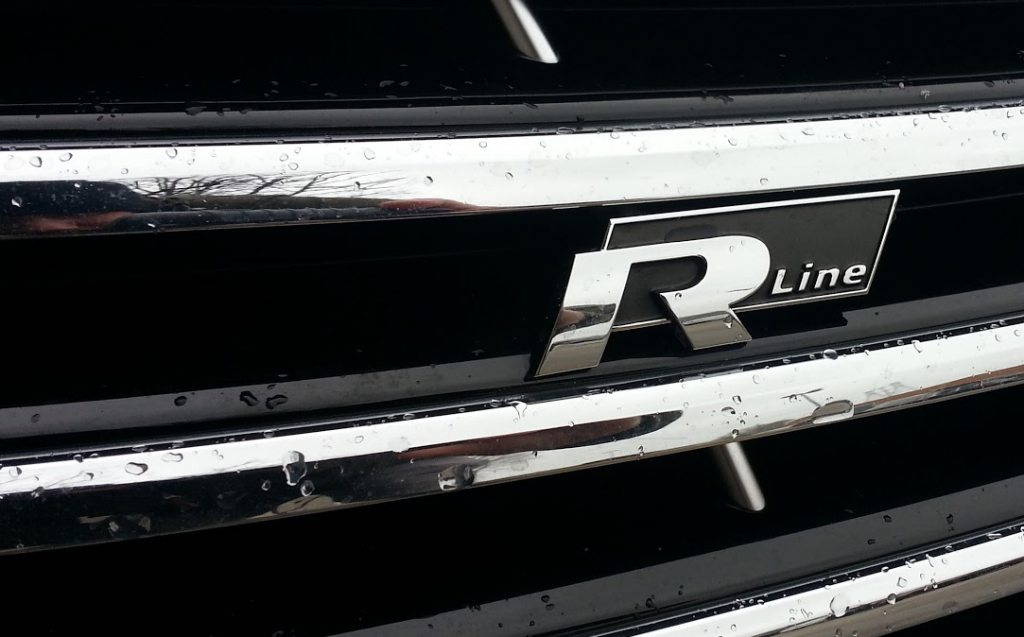 Moving up to an R-Line adds about $3000 to the CC’s bottom line, but for some shoppers the unique trim and upgraded wheels and tires are worth it.

The CC’s small front-door openings present entry-and-exit complications for large and broad-shouldered folks. Note that the mechanically similar Volkswagen Passat does not share this issue with the CC. You can check out all of our Big & Tall Friendly test vehicles here.