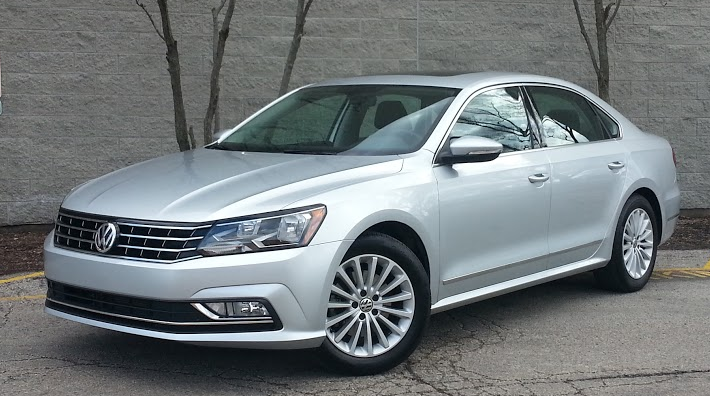 The tested mid-level 2016 Volkswagen Passat 1.8T SE w/Technology carried an impressive list of features for its price of $29,230 including destination.

The not so good: Trunklid hinges dip into load area 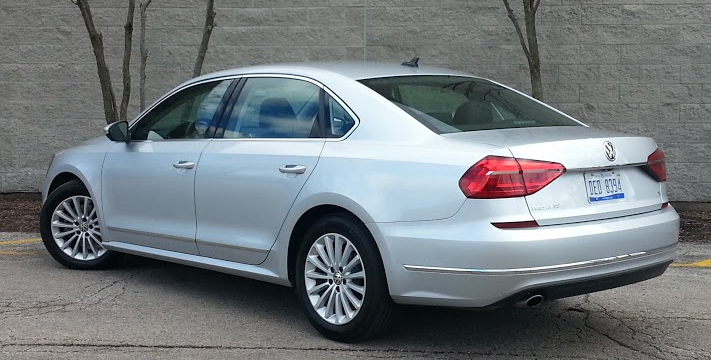 Ah, the Volkswagen Passat. You know, the last one of these that Consumer Guide® had a chance to test drive came with one of those, oh . . . what’s the word? Begins with a “D.”

That now seems like something that happened in a galaxy far away and long ago. (Actually it’s been just a little more than a year past, but a lot’s happened since then.) The latest Passat to come CG’s way was a middle-of-the-road 2016 SE with a turbocharged 1.8-liter four-cylinder gas engine and six-speed automatic transmission. Naturally, it showed off the midsize VW’s touched up front and rear styling, and bore some of the new technology and improved connectivity features that have been ushered in for this year. Unaltered, though, were the good passenger and cargo space that have made the Passat a worthy contender in its market segment.

The 170-horsepower engine delivers a commendable level of usable power. In “normal” driving situations—the usual on-street give and take—it manages to avoid turbo lag, and highway operation isn’t particularly hampered, either. A good push on the pedal is rewarded with a pretty direct flow of power, and the transmission kicks down when you need it to for confident passing. On top of everything else, this powerteam is impressively frugal. EPA economy ratings are 25 mpg in city driving, 38 mpg on the highway, and 29 mpg combined, but this driver’s 191.7-mile test run composed of about 70 percent city-style driving chalked up 29.55 mpg.

Meanwhile, the Passat continues to provide a nice ride for the class, with fine bump absorption. Handling is satisfying, too, with body lean that’s well controlled in turns, and responsive steering (that felt a little meatier than in CG’s 2015 Passat tester) for good maneuverability.

CG’s SE test car checked in at $29,230 with delivery, meaning it had the Technology package that VW counts as a separate model from the base SE that costs $2130 less. Items specific to the top-end SE include a Homelink universal garage-door opener, keyless entry with push-button starting, rain-sensing windshield wipers, heated rear seats, navigation system, fog lights, hands-free trunk that can be opened by swiping your foot beneath the rear bumper with the key on your person, blind-spot monitor (new for ’16), and rear cross-traffic alert that will apply brakes if the driver doesn’t when an approaching vehicle is detected. That all builds on the basic SE equipment like 17-inch alloy wheels, a sunroof, heated front seats, Bluetooth connectivity, satellite radio, 6.3-inch touchscreen, voice control, rearview camera, adaptive cruise control, and a newly added forward-collision warning with emergency braking. The SE also has VW’s Car-Net system with app integration to Apple CarPlay, Android Auto, and MirrorLink, plus emergency-services/roadside-assistance notification capability. 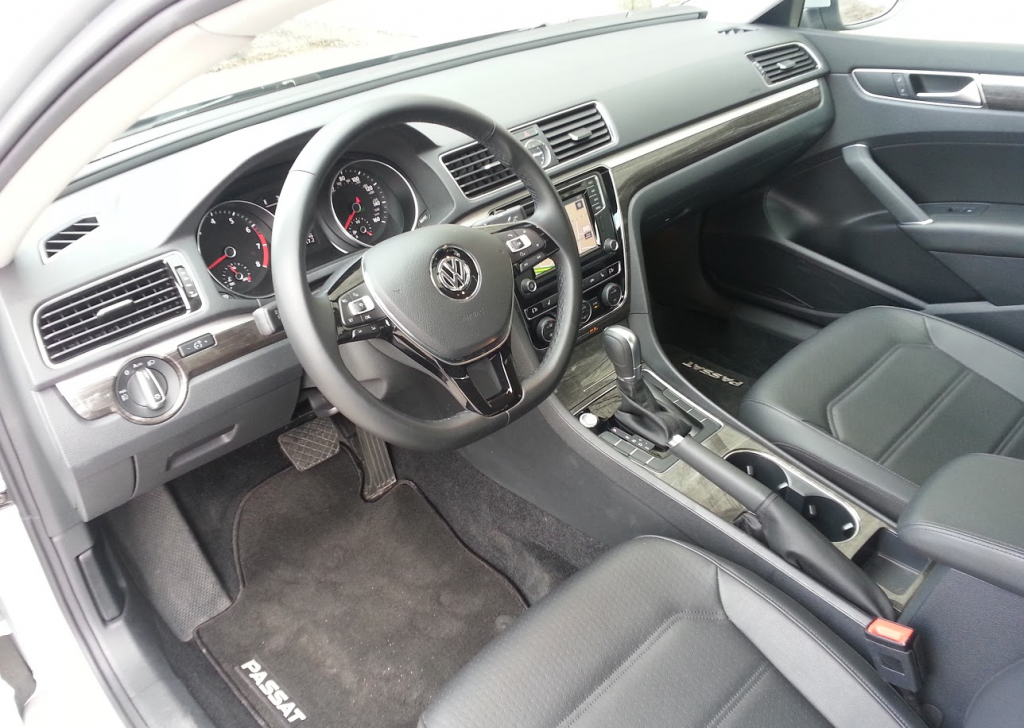 Passat’s interior is well laid out and nicely appointed while carrying over the “straight line” look of the exterior.

Controls remain easy to read and use. Managing audio settings is easily done on the touchscreen, with no complicated menu-addled central dial/pad to waste your time. Controls for the dual-zone automatic climate are at the center of the dash; dials for fan speed and right and left temperature settings are mixed in with an array of buttons for other functions. A covered bin at the front of the console hides a block containing a USB port, auxiliary input, and 12-volt power point. The back of the console presents rear occupants with seat-heat switches and a USB port.

The supportive and comfortable seats in the test car were covered in smooth leatherette (genuine leather covers the steering wheel and shifter knob). Coverings on the upper dash and along the tops of the doors compress if you push on them, and soft-surface material is found on the armrests and door centers. Bright-metal and woodgrain highlights lend an air of sophistication, but not ostentation.

Interior storage in front consists of an accommodating glove box, a modest cubby under the console armrest, two open cup holders in the console, and fairly big door pockets with bottle holders. Rear-seat storage adds up to smaller door pockets with room for bottles, pouches on the backs of the front seats, and a pull-down center armrest with a pair of cup holders.

One of the Passat’s leading qualities is its interior room. Front seats welcome the long-legged if they need it, and the driver gets a handy dead pedal on which to comfortably rest his or her left foot. Depending on how much space the front passengers require, rear-seat legroom can range from good to excellent. There’s enough width for three-across seating in back but a substantial central floor tunnel pretty much rules out an adult passenger in the middle. Headroom is pretty good throughout. Doors open wide for easy entry/exit, and driver vision to the side and over the shoulder is quite good. 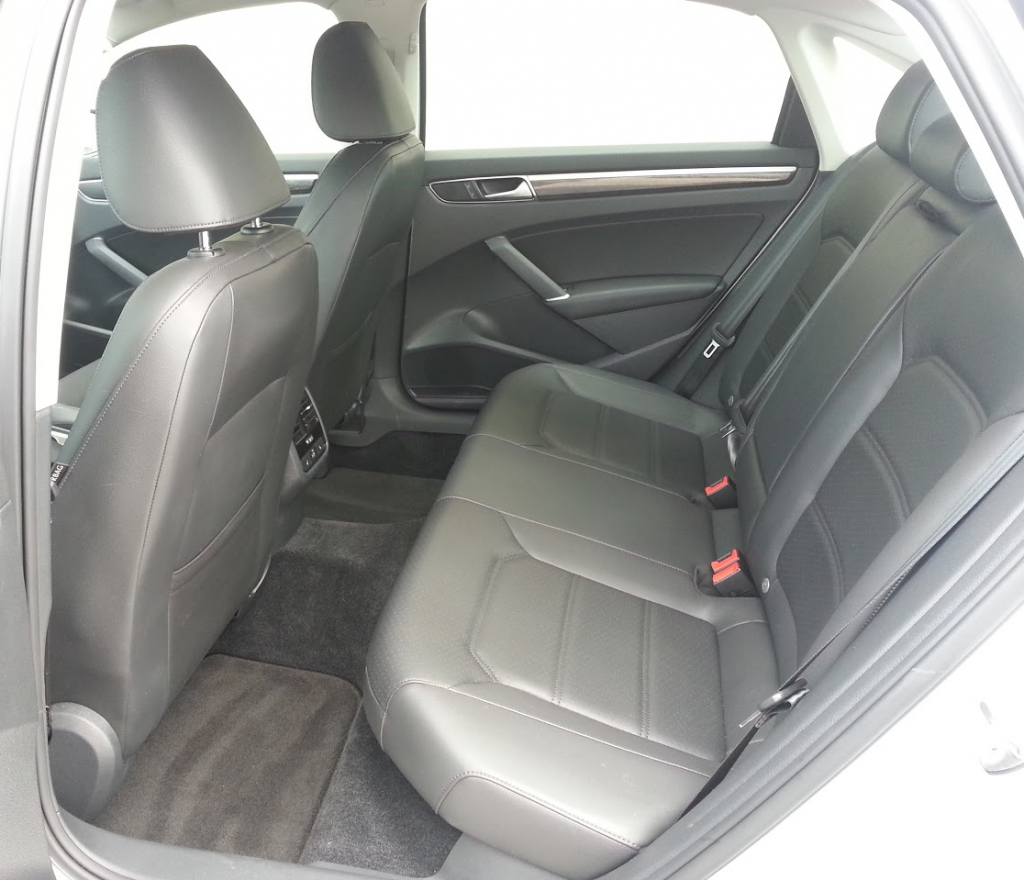 There’s still great rear-seat legroom even with the front seats set all the way back — and they go really far back — making Passat one of the roomiest cars in the class.

For cargo needs, a spacious trunk extends far forward. The trunklid rises fully vertical, which makes loading easier. A plastic divider on the left side can be inserted to create a separate zone for small incidentals or removed to open up additional full-width load space, and there’s some small-item storage available around the spare tire under the trunk floor. Rear seats fold in a 60/40 split—just not especially flat. At least there’s a smooth transition from trunk floor to the backs of the folded seats.

Passat has always struck me as the stately conservative in the midsize segment, and the 2016 edition does nothing to change that view. And in this case, at least, “stately conservative” is intended as a compliment. Appearances aside (I rather like the clean, uncluttered lines — both inside and out — while someone else here said they looked “boring”), the interior is a model of functionality: easy-to-use controls and huge amounts of legroom — enough in back, in fact, that the Passat could easily serve as a low-cost limo. Trunk room is likewise spacious, and is especially impressive when you fold down the rear seat backs, which leaves a level (though not quite flat) load floor all the way to the front seats — a rarity in the class. The only fly in the cargo ointment is that the sickle-shaped trunklid hinges dip deep into the cargo area as you close the trunklid, as I found out by crunching something in a box I’d slid all the way to the sidewall.

Although some turbo fours make roughly the same amount of horsepower and torque on paper as a V6, I’ve yet to find the former that can match the latter in drivability; you just don’t have the same kind of “instant on” power. But while the small 1.8-liter turbo four in the Passat comes with a rather tepid 170-horsepower rating (about what most non-turbo 2.5-liter fours make), that figure is deceiving, as it comes as close as any of its type to meeting the V6 challenge. There’s just a bit of turbo lag when you stab the throttle from a stop before real power arrives, and the same goes while underway. And at no time did it feel underpowered. In addition, over its first 550 miles in our care, it has averaged a remarkable 27.8 mpg in 74 percent city driving. As we’ll have the Passat for about three months, we’ll get some highway trips on it to see how it fares out on the open road, but so far, it certainly impresses on a space-per-fuel-dollar basis.

Whether you consider it a very roomy midsize car or a very thrifty full-size one, the Passat offers a lot for the money.

This test Passat will remain in the Consumer Guide test fleet for the next 90 days. Watch for monthly updates as we live with this midsize sedan for an extended period of time.