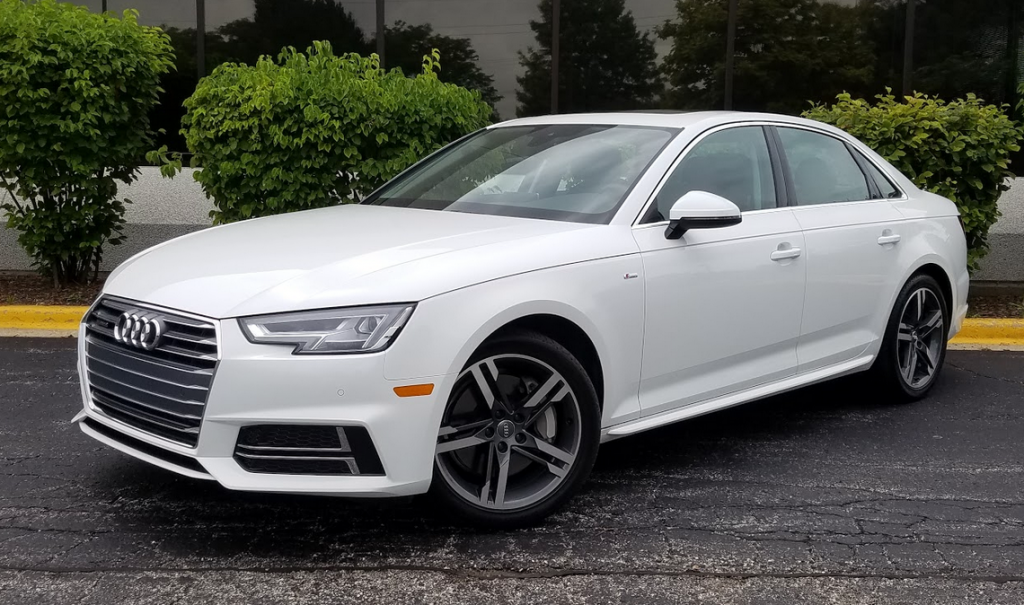 The not so good: Small door openings, complicated media interface

You can’t always judge a book—or a car—by its cover. The fully redone 2017 Audi A4 premium compact sedan is a case in point. Its “cover” will seem fairly familiar to anyone who has gazed upon an Audi sedan in recent years. Reading from the text, though, reveals more interior room than before, additional power, and a host of new technology and safety features. 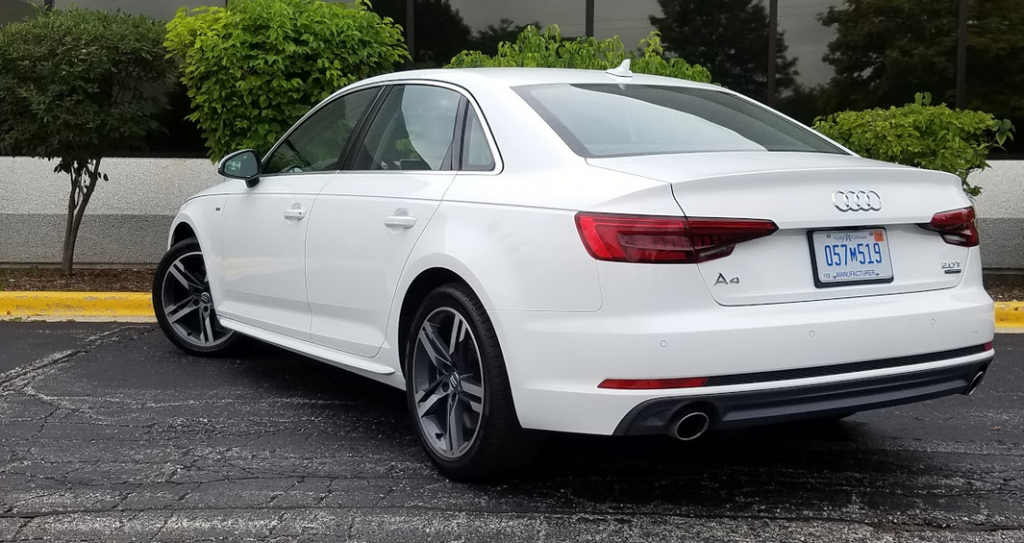 Audi’s “S line” exterior trim is included in the $3800 Premium Plus Package. S line elements include unique front and rear bumper treatments, body-color side sills, and a matte-gray rear diffuser.

The A4’s handsome cabin is reasonably roomy for the class, though larger occupants will find both the front- and rear-door openings a little narrow.

CG’s test car actually ascended to a full delivered price of $47,900. Contributing to that were the Cold Weather package, with a heated steering wheel and rear seats; and the Technology package, with navigation, Audi’s MMI central controller for audio and other functions, Audi Connect PRIME & PLUS app integration, pre sense rear-collision detection, blind-spot monitoring, and “virtual cockpit” instrument display.

The new A4 at once seems familiar, but Audi stylists have incorporated more sharply creased detail elements into the design for 2017.

The sum of all this is a sedan with the kind of lush, high-quality interior for which Audi has become noted; a fair degree of utility; and very good performance.

The turbo 2.0-liter engine now boasts 252 horsepower, a gain of 32 over the previous A4, and develops a peak 273 lb-ft of torque. This powerplant moves the car briskly—a bit more so with the “Dynamic” mode heating up power delivery and holding up gear changes—albeit with a bit of lag at standing starts. The transmission is very smooth—you certainly hear the shifts as the rising engine revs momentarily cut out but you don’t feel the jump from one gear to the next. If there’s a fly in the ointment, it’s a somewhat gravelly exhaust note under determined acceleration. The EPA projects that an A4 with quattro will average 24 mpg in city driving, 31 mpg on the highway, and 27 combined. This driver saw 25.18 mpg after a run of 204.9 miles that was 51 percent city-style operation. A stop/start feature, which can be switched off, works to shave gas use at full stops.

Ride is fairly absorbent, swallowing up the majority of road blemishes. It’s quite quiet, too. Handling is sharp, and cornering lean is well controlled. 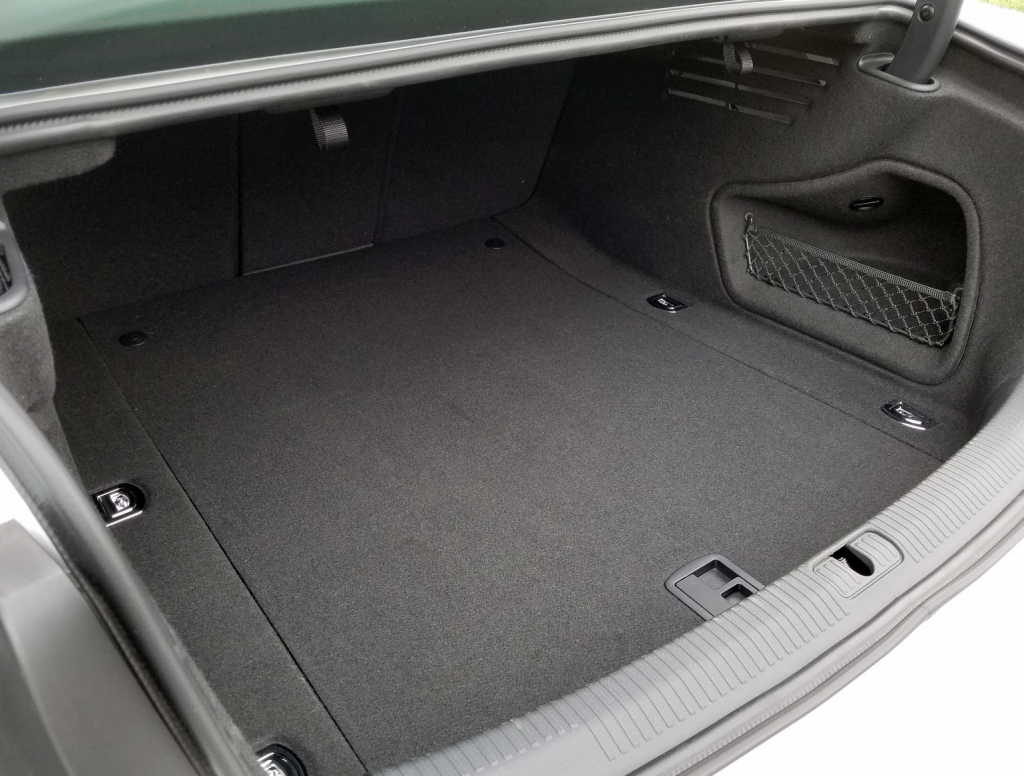 The A4’s trunk is class competitive in terms of space, and it’s very nicely finished.

Control freaks will freak out over the controls in the A4. The rest of us may come to see the instrument display as being somewhat busy. There’s a lot of information imparted from the display between the electronically projected speedometer and tachometer dials (thumbs get a workout summoning this info from steering-wheel-mounted buttons), and the optional virtual cockpit feature fills the 12.3-inch instrument display space with a panoramic 3D-like map as the gauge “dials” shrink and migrate to the corners of this area.

The Tech Package’s MMI control puts access to infotainment features at the driver’s fingertips, but it requires a lot of attention to scrolling through menus. Something that should be simple, like setting up a list of radio presets, calls for more effort than it ought to. Climate controls are located low on the dash and rely on twin dials for temperature selection, with buttons to activate various functions, and toggle switches to select fan speed and direction. Apparently there was not enough room for a “park” position on the gear selector. A separate thumb button marked “P” on the back of the shifter knob puts the car to secure rest.

There’s a good amount of stretch-out space up front and plenty of headroom. Rear legroom is quite good for a compact, and indentations in the backs of the front seats squeeze out even more space. A tall driveline hump effectively confines the rear seat to two people, however. Entry and exit are easy, and driver vision is good to just about everywhere around the cabin.

A pair of open cup holders resides in the console ahead of the shifter. There are an acceptably sized glove box and console box for storage of personal items, and pockets in all four doors—though the pockets are larger in front than in the rear. A pull-down armrest in the center of the back seat incorporates a shallow covered storage space, and two cup holders unfold from the front of the device. Net pouches are attached to the backs of the front seats. For cargo carrying, rear seats fold fairly flat, with a smooth transition from the ample trunk.

Audi has clearly improved the A4, stuffing it with more power and the latest safety and infotainment technologies. You may just not know that by looking at it. 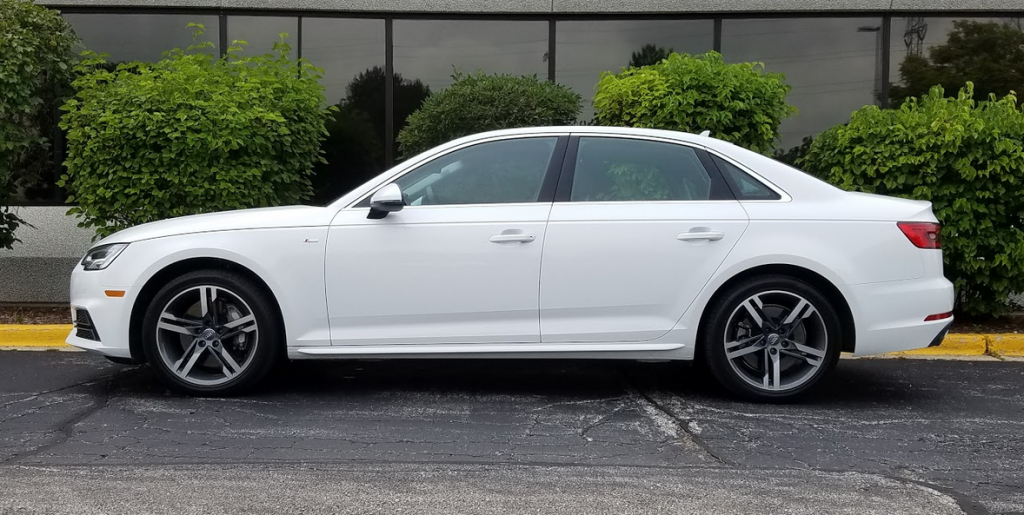 Our test car’s Ibis White paint is a no-cost option; premium color options add $575 to the bottom line. Also, Audi will be happy to match any color sample you bring them as a custom paint color–for a $3900 fee.