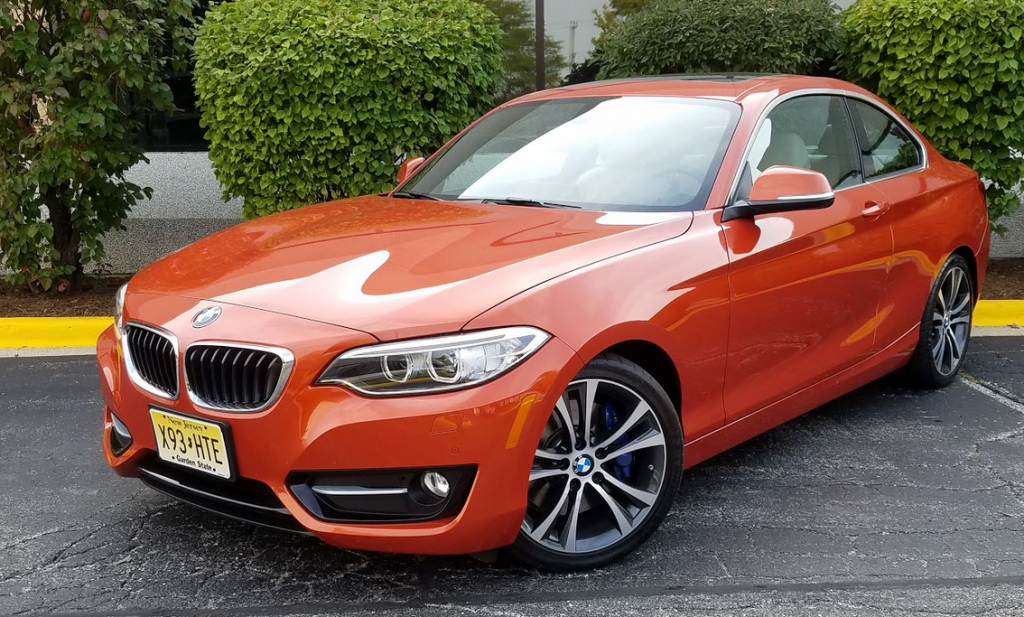 The not so good: Optional equipment–some of which should probably be standard on a luxury-brand vehicle–really drives up the bottom line

When BMW uncorked the 2-Series a few years ago, it went right for the heartstrings of its ardent fans by advertising it in the context of the car that arguably did more to secure the Bavarians a solid foothold in America than any other of its products. The 2-door, 2.0-liter 2002 sold here from 1968 to 1976 was quick and capable, and it blazed the trail that the slightly bigger 3-Series would start paving with gold in its wake. 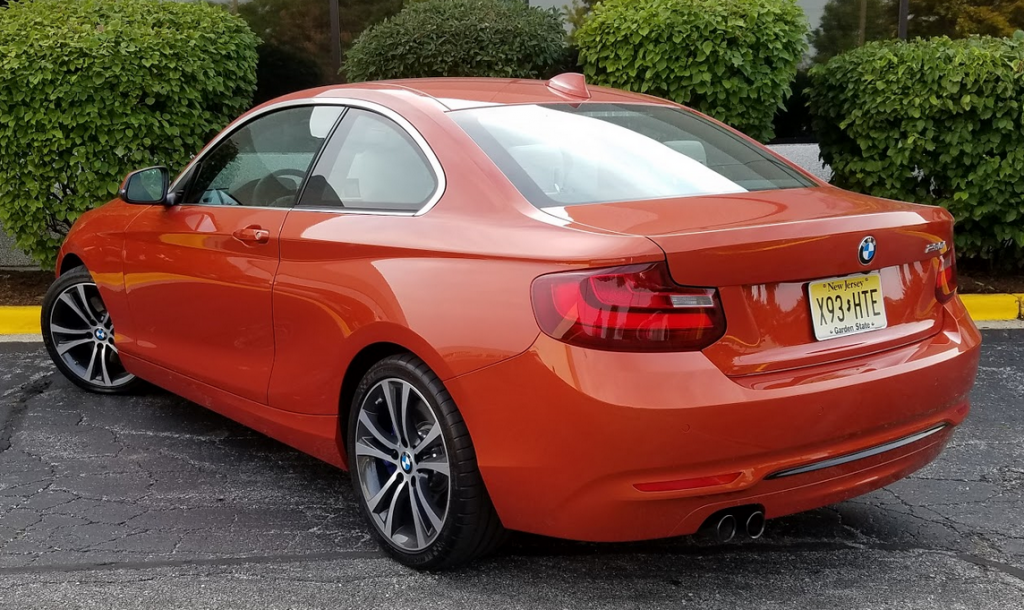 Rear-seat space and trunk room are not strong points, but overall the BMW 2-Series is quite practical for a sporty car.

If you bought the idea that BMW was pitching through its 2-Series-as-grandson-of-2002 ads you’ll probably find that the most basic of the modern-day cars is the truest spiritual successor. That would be the 230i coupe that Consumer Guide® editors tested.

Like its acclaimed ancestor, a 2.0-liter 4-cylinder engine powers the 230i, albeit now with a turbocharger that helps it deliver 248 horsepower. It’s not the strongest pup in the litter—the 6-cylinder M240i and M2 models have that locked up—but it’s still plenty playful, especially when equipped with a 6-speed manual transmission like CG’s test car was. 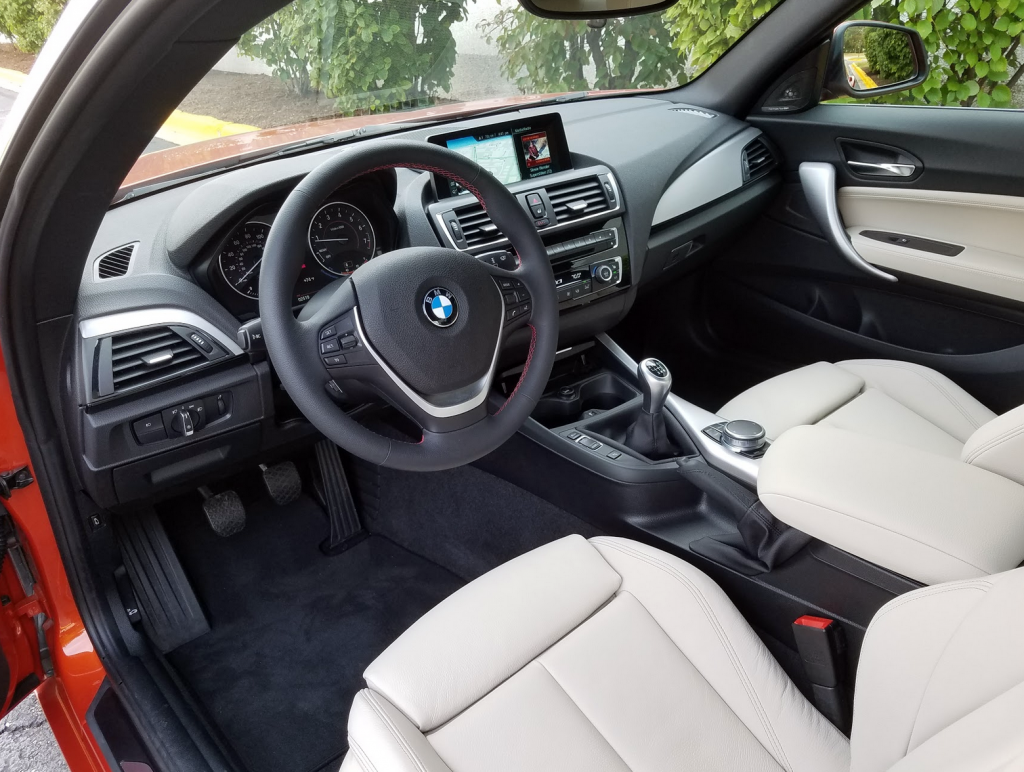 The 230i’s cabin is understated but classy–particularly when outfitted with the $1450 Oyster Dakota leather upholstery.

The 230 succeeds the 228i that was in the 2-Series line from 2014 through 2016. The current car’s engine makes eight more horsepower and, at 258 lb-ft, three more lb-ft of torque—which was apparently enough of a change to make BMW want to spring for new trunklid badges. Standard Driving Dynamics Control offers a choice of “Eco Pro,” “Comfort,” “Sport,” and “Sport+” settings. When CG drove a 2017 M240i xDrive coupe, dialing up a Sport mode registered with obviously quicker response; in this driver’s estimation, the effect was less pronounced with the 230i. The 4-cylinder car is, of course, not in the turbo six’s league for ultimate acceleration, but it is hardly slow. The 6-cog stickshift (a no-cost alternative to the standard 8-speed automatic) lets drivers make what they will of the juicy torque band that is at peak from 1450 to 4800 rpm. Shift-lever throws are a little long, but they slip easily and directly through the gates—with the exception of reverse, which almost always resisted this reviewer’s first attempt to engage it. A firm but easily modulated clutch adds further delight to the driving experience.

At fill-up after a 93.8-mile test stint, this writer recorded 24.95 mpg, which is up near the EPA’s estimate of 25 mpg in combined city/highway driving. Considering that the test drive included 69 percent city-type miles, that’s not too bad. The official projections for pure city and highway driving are 21 and 32 mpg, respectively. Drivers intent on stretching their gas budget—at least once in a while—can select the Eco Pro setting to temper engine performance.

The 230i’s 248-horsepower turbocharged 2.0-liter 4-cylinder is no hairy-chested powerhouse, but it is strong enough to be plenty entertaining with astute use of the slick-shifting 6-speed manual transmission.

CG’s test car was an easy yet precise handler, with a generally nice ride to boot, especially in Comfort mode. To replicate that experience, you’ll need to plunk down $2300 for the Track Handling Package option with the Adaptive M Suspension (with electronically adaptable shocks) and variable sport steering (that reads speed and steering angles to adjust steering effort). The 230i displayed alert turn-in for excellent maneuverability. M Sport brakes and 18-inch alloy wheels complete the handling package, the latter replacing standard 17-inch rims. The tester came with rear-wheel drive but the 230i is available with xDrive all-wheel motivation. 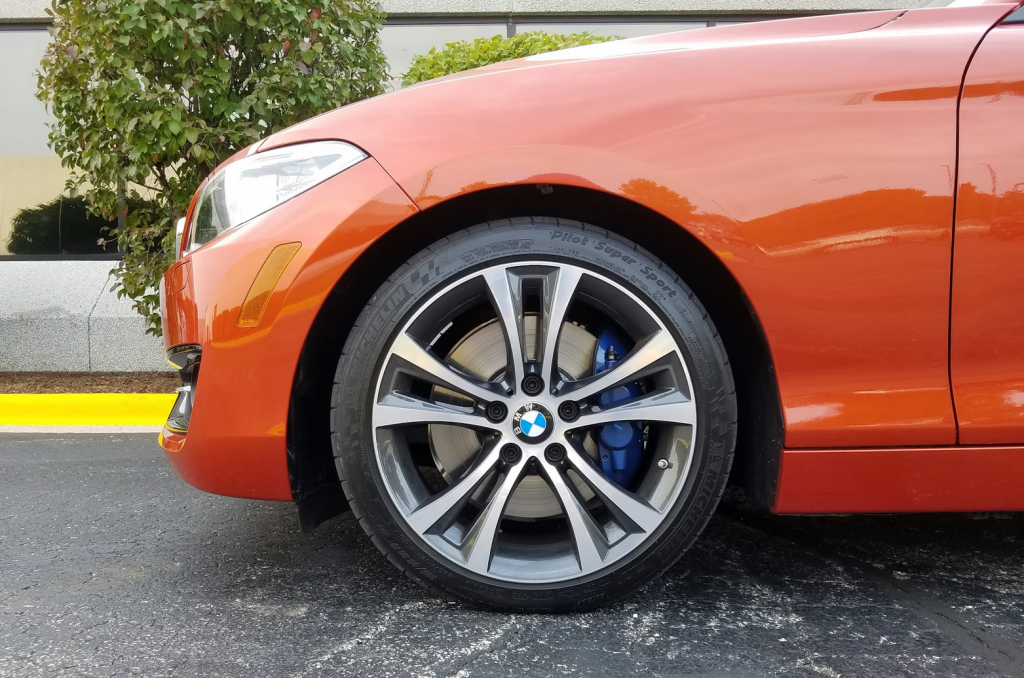 Considering that we’ve already reported on a few 2-Series coupes, we’ll quickly run through the highlights of accommodations and equipment also found in the 230i. Cabin space is cozy yet comfortable in front, but tight in back, where headroom is limited to folks of about 5’-10” or less. A power-sliding feature on the front seats facilitates rear-seat entry and exit. Seats are clad in either “SensaTec” leatherette or optional leather, and there’s good dispersal of padded and soft-touch surfaces throughout the interior.

Large, legible analog dials serve as the speedometer and tachometer. Standard automatic climate control has rotating dials for temperature settings, with a row of buttons to handle all other tasks. BMW’s iDrive, with a set of controls on the center console, somewhat laboriously governs infotainment features that register on a display screen located atop the dash.

Interior personal-item storage seems scaled to the cabin space. Door pockets are large and segmented, but the console box, glove box, net pouches on the backs of the front seats, and a shallow open tray between the rear seats offer limited storage. The only two cup holders are located in the console.

The opening to the trunk is somewhat narrow, but the cargo space within is fairly good for a compact coupe of this size. A bin on the right side is handy for keeping small items in place. Rear seats are split 60/40, and fold almost flat, albeit with a slight gap at the base of the seats.

The test car had a starting price of $33,150 that included features like a leather-wrapped steering wheel, halogen fog lights, adaptable cruise control, rain-sensing windshield wipers, Bluetooth connectivity, BMW app suite, and a Wi-Fi hotspot. But its hard-to-miss Valencia Orange paint, “Oyster Dakota” leather upholstery, Apple CarPlay smartphone compatibility, navigation, and premium audio system were among the stand-alone options added. Various packages contributed things like a heated steering wheel and front seats, a rearview camera, moonroof, satellite radio, and more. Some of these regularly turn up on more prosaic machinery that costs lots less than the $48,070 for which the test car stickered. At least unmistakable driving fun is still on the house.

The 230i delivers the agile, finely honed driving personality that is the BMW brand’s trademark at price that is much more accessible than its higher-powered siblings… but keep an eye on those spendy options.