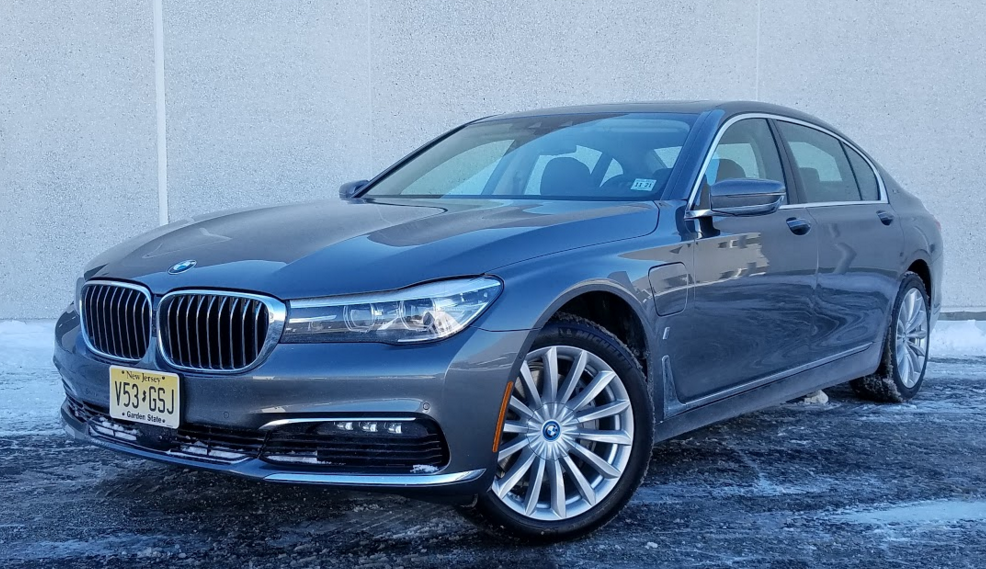 The not so good: Cargo space and utility, acceleration (for a premium-large car) 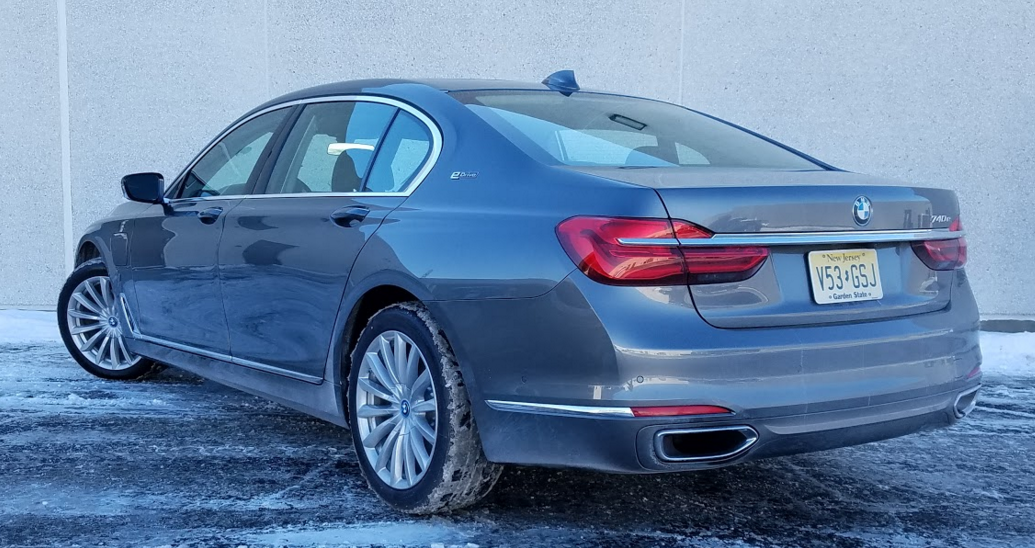 Although the model name doesn’t reveal it, the 740e is a plug-in hybrid with an all-electric range of about 25 miles. Electric motors join with a turbocharged 4-cylinder (!) engine to produce a combined 326 horsepower.

The line of BMW 7-Series luxury sedans grows for 2017 with the addition of a 740e xDrive, a plug-in hybrid with all-wheel drive. It joins a turbocharged 2.0-liter 4-cylinder engine with an electric motor for a combined 326 horsepower, and it brings a touch of green to the senior-executive class.

If owners do bother to plug in regularly and take fullest advantage of the powerteam alternatives in the 740e, they’ll get more than 25 miles of all-electric operation—under optimal conditions. A good December cold snap while Consumer Guide® had a 740e to test cut into range a bit. However, the electric motor also aids the gas engine with an added boost when drivers put their right foot down hard.

The 4-cylinder engine, the first in a U.S.-market 7-Series, is joined to a smooth and well-behaved 8-speed automatic. Selectable modes allow drivers to run solely as an electric; in battery hold, which allows for electric operation when it is most advantageous; in battery charge; or in traditional hybrid operation, in which the motor operates only at certain low speeds in place of the gas engine. There’s also a “Sport” mode that affects throttle response and steering action. Sport certainly makes its presence felt when you nail the gas pedal—and, more tactilely, when front-seat side bolsters automatically contract a little for extra grip. 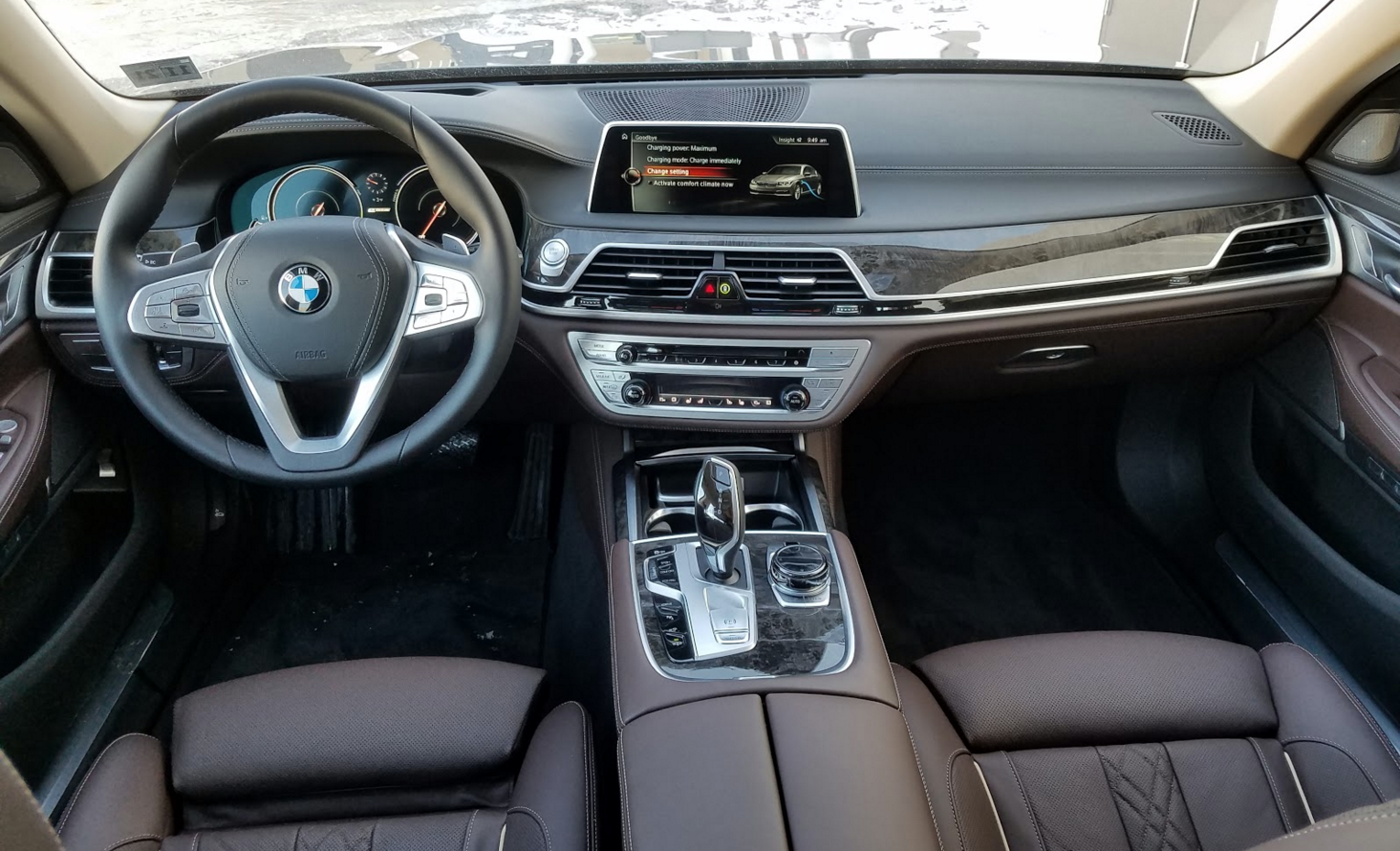 Interior trimmings befit a car that starts at nearly $90,000. To that, our test vehicle added $1500 worth of Nappa leather upholstery — along with a few other options that pushed the bottom line just past $100,000.

That’s not to say BMW’s big hybrid sedan is an absolute rocket. If you want to go fast in a 7-Series, at the least you’ll have to step up to a V8 750. The 740e’s role is to try to improve the line’s overall emissions and fuel-economy performance. The EPA combined-mileage rating for the car in gas-only mode is 27 mpg—which is eight mpg more than a 750. Running primarily on the gas engine for 184.1 miles, 42 percent of that in city conditions, this driver averaged 28.76 mpg.

A 9.2-kilowatt-hour battery supports the electric drive. This is a fairly sizeable unit that, unfortunately, makes a substantial dent in trunk capacity, and leaves very little flat floor in the cargo bay. The charging rate for this battery isn’t as fast as for some fully electric vehicles. To get back to full charge with Consumer Guide®’s “level-2” charger, the 740e needed about 2.5 hours. For comparison, when this driver has used CG’s extended-test Kia Soul EV, it has taken just a little longer to bring the half-depleted larger battery of this fully electric car back to maximum charge.

In most other respects that matter, the 740e is a full-blooded 7-Series model with the new body structure that came in for 2016. It makes extensive use of aluminum and carbon fiber for weight savings and improved rigidity. Interior room is quite good, and is especially impressive for rear-seat legroom. Doors open wide to ease entry and exit, and have a “soft close” feature. A third adult will fit in the center of the back seat but will straddle the driveline hump. Drivers enjoy good sightlines to most every direction. Ride and handling are pretty good for a large car (if that sounds like a caveat, it is) but not the peak experience that so many other BMWs provide. The ride was impressively quiet to this reviewer, even at speed with expressway rushing away underneath. Note that the 740e comes only with BMW’s xDrive all-wheel drive. 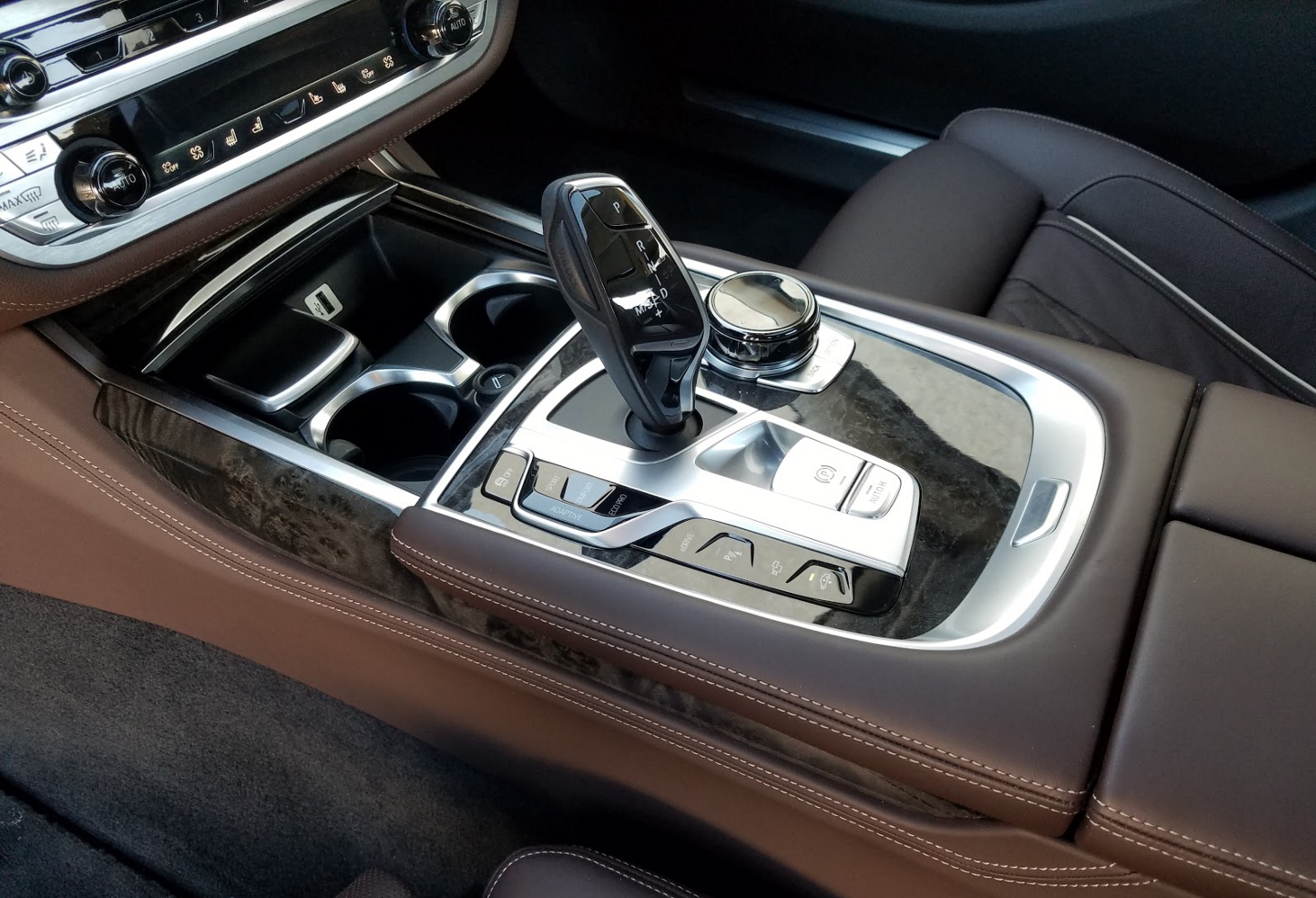 BMW has taken a lot of heat over its iDrive control system, but John feels the latest generation is more intuitive than it used to be–if still a bit tedious to use.

Appointments are truly luxury-grade. Seats are comfortable and supportive—in the test car they were covered in optional Nappa leather. Gray poplar-wood highlights are standard. There’s leather on the dash and steering wheel, and soft-touch material runs all the way down the door panels. Storage pockets in the doors are lined. Indeed, cabin storage space is pretty good. Rear passengers can take advantage of a long pull-down center armrest with a covered storage space and twin cup holders that pop out of the front. Rear seats do not fold, but they include a central pass-through for long items. 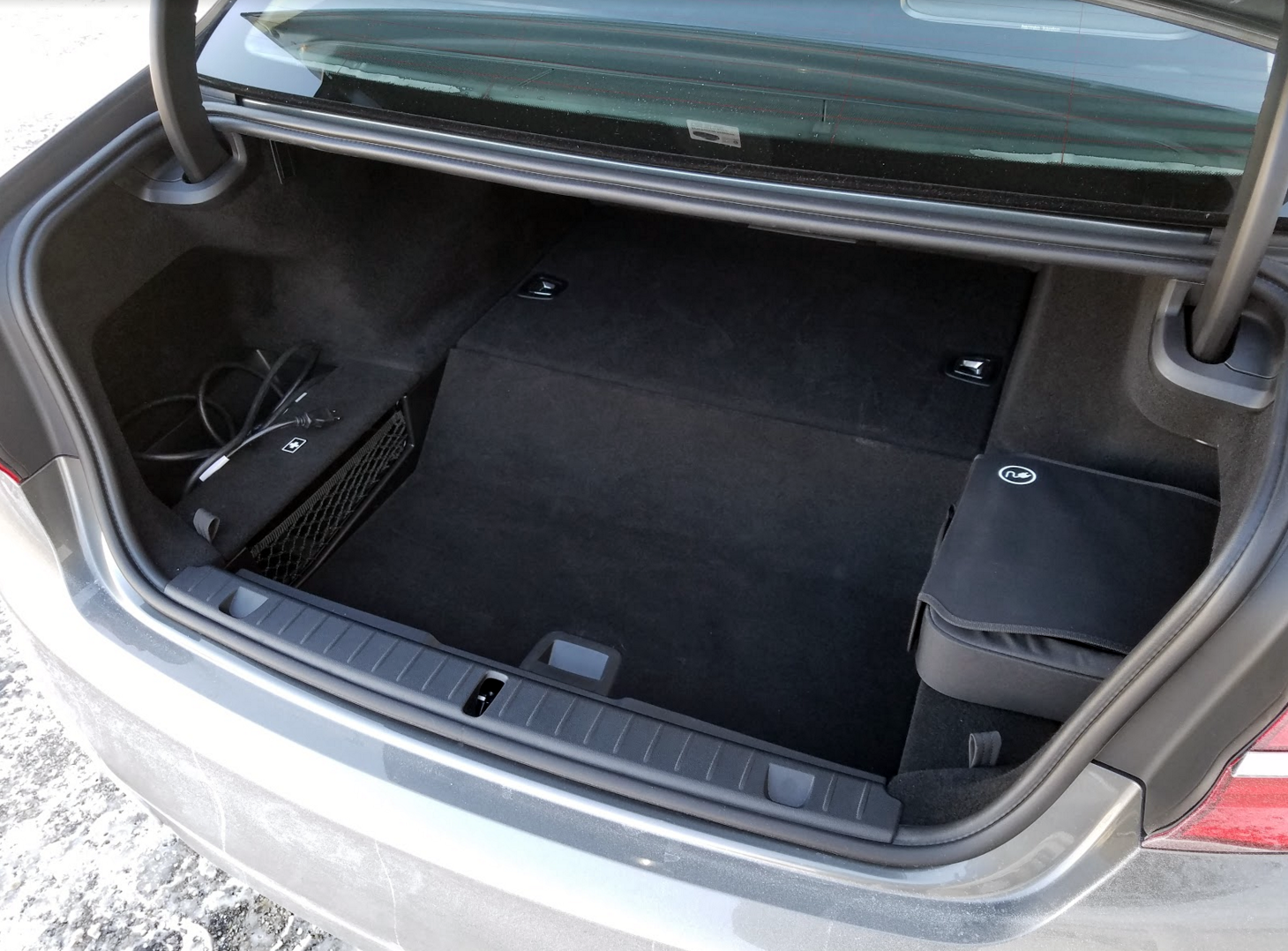 One “cost” of the 740e’s plug-in hybrid system is in trunk room. The hybrid battery takes up a lot of space, leaves only a small amount of flat-floor area, and allows for just a ski pass through to the rear seat.

BMW’s console-mounted iDrive controller manages systems like audio, navigation, and communications. This requires a goodly share of steps to get anything done but it is moderately intuitive. If all else fails, 7-Series drivers can avail themselves of “Gesture Control” to perform tasks like raising and lowering audio volume by waving and pointing within proximity of an interior sensor. Virtual driving gauges display well but buttons for ancillary controls and the climate system are hard to read at a glance; they consist of small, black icons on brushed-metal surfaces.

The 740e xDrive starts at $89,100, but CG’s test car managed to make it to $100,595 with options and delivery. It cost extra for things like blind-spot detection, forward-collision warning and mitigation, lane-departure warning, active cruise control, a head-up display, 19-inch light-alloy wheels, and more. The interesting question is if people who shop at the 7-Series’ end of the spectrum will want to go to that amount of trouble to get a car with the 740e’s tamped-down performance.

It will likely be a slow seller, but the BMW 740e allows executive types to “go green” with few sacrifices to their comfort.