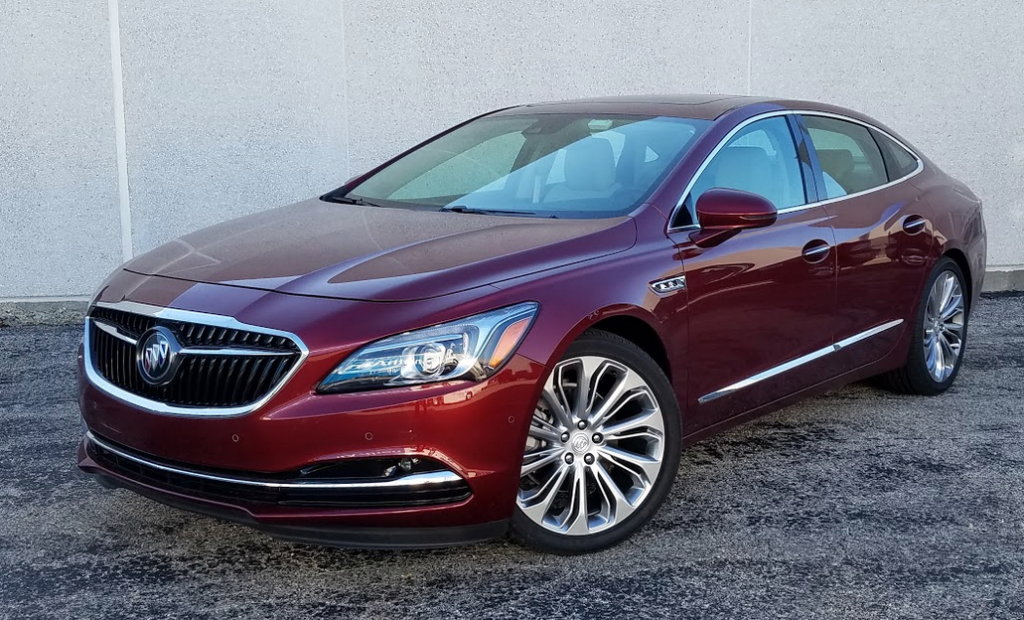 The not so good: Awkward action of shift lever

Why the 2017 Buick LaCrosse is a Consumer Guide Best Buy

Whenever a manufacturer redoes one of its cars, it hopes to make it more likeable. That’s the result Buick has achieved for the 2017 LaCrosse.

Things to like about this latest LaCrosse include a new 3.6-liter V6 with more power and better economy, plus an 8-speed automatic in place of the former 6-speed. There’s a stronger yet lighter structure for the new body, which is styled with touches first seen on the brand’s well-regarded 2015 Avenir and 2016 Avista concept cars. An impressively quiet cabin offers more passenger room, and those passengers can take advantage of an increased count of comfort and safety technology features. 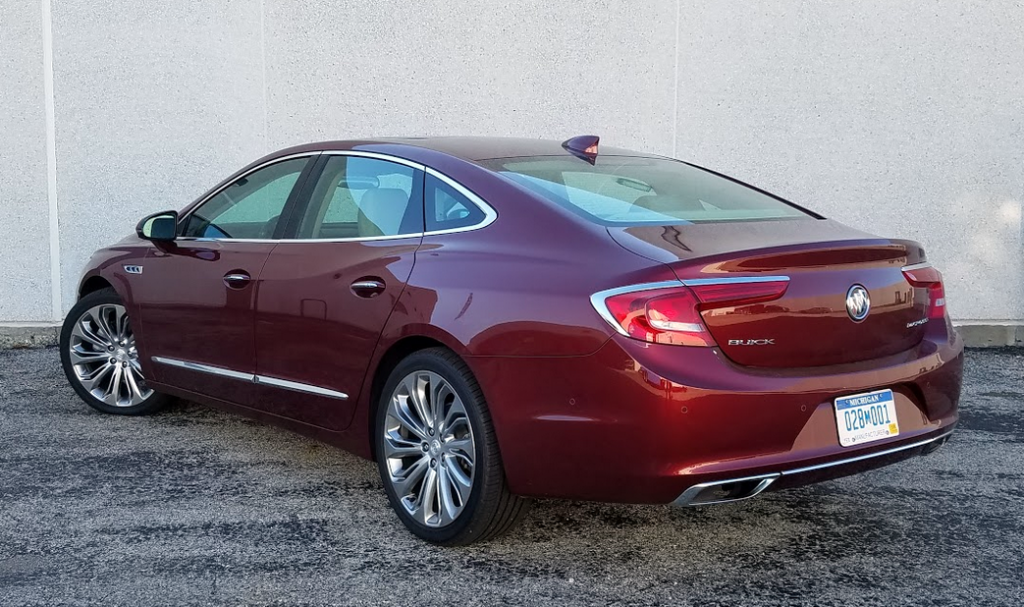 The redesigned 2017 LaCrosse is significantly sleeker and sexier than the previous-generation model. Some styling cues were taken from the well-received Buick Avenir and Avista concept vehicles.

Consumer Guide® editors sampled a front-wheel-drive LaCrosse Premium. Premium is the plushest of the four trim levels, and the only one to come with a choice of front- or all-wheel drive. Base price of a “puller” Premium is $41,065 (add $3000 for AWD), but with options and delivery the test car came to $48,495.

The LaCrosse cabin is spacious and well appointed, though the sloping rear roofline cuts into rear-seat headroom.

While it manages to envelope passengers in a cabin with the look and feel (and features) of cars from the lower end of the luxury class, the ’17 LaCrosse turns out to have an unexpected athletic side. The new version of the largest Buick sedan is slightly longer, lower, and wider than its predecessor, which might suggest that it’s more comfortable than it is fun to drive. Ride comfort is good, but steering and handling are alert and responsive enough to keep the car from feeling flabby and dull. A “Sport” mode, activated by a console button, is included to enhance the steering and suspension feel—though to this driver whatever improvement it was intended to provide seemed very slight. 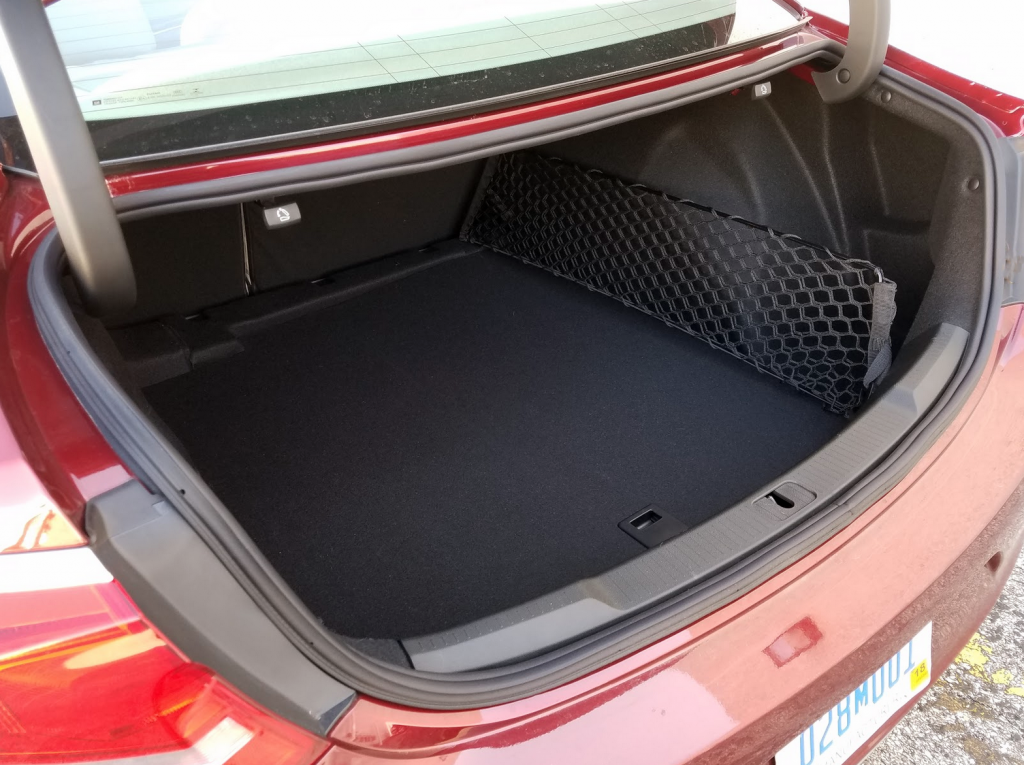 LaCrosse boasts a decently large trunk, though the load floor is compromised a bit by the wheelhouses.

Then, too, the new engine is a satisfying performer. The former base 4-cylinder engine has been dropped, leaving a 3.6-liter V6 as the sole powerplant. While displacement is the same as the previous LaCrosse V6, the engine design is new. In the process, horsepower rises to 310 (a gain of six). With 282 lb-ft of torque on tap, it propels the LaCrosse from standing starts with ease. There’s ample oomph for confident merging and passing, with on-the-money kickdown from the smooth-shifting new transmission.

With an overall weight reduction of about 300 pounds, 8-speed trans, new stop/start feature, and addition of cylinder deactivation, LaCrosse fuel-economy estimates improve for 2017. The EPA rates the car with front-wheel-drive at 21 mpg in the city, 31 on the highway, and 25 combined. This reviewer averaged 20.65 mpg after logging 176 miles in the test car, 71 percent of which was city-type driving.

Though exterior size gains are modest, the LaCrosse wheelbase is lengthened by 2.5 inches, which translates into more interior space. Front passengers will find all the leg- and headroom they need while settled into the comfortable and supportive seats. Rear-seat passengers are accorded legitimate big-car legroom. The roof slope shaves off some headroom, but there’s still plenty of it. Three adults should be able to squeeze across the back seat, though the middle passenger will straddle a floor hump.

Interior materials have a high-grade look and feel, with plenty of soft-touch surfaces. The wide sweep of the instrument panel and broad, rising center console bear the stamp of the Avenir show-car cabin. The big IntelliLink screen is handy for calling up audio, navigation, apps, and other systems, and tuning and saving radio presets is uncomplicated. Climate controls rest just below the touchscreen, with temperature managed via a pair of dials but other functions summoned by buttons, some of them repetitive-push. Three large dials serve the driver. In the center is a virtual speedometer and electronic vehicle-information readout, but the outer dials house a full complement of analog “needle” gauges—unexpected for a large family sedan without overt performance aspirations. Less accommodating are the headlight control and shifter. The headlight dial is on a small platform that projects from the instrument panel, but its angle makes it hard to see all the available settings at a glance. The shifter isn’t traditionally linear, with Park and Reverse in a row with the driving gears; in the LaCrosse, Park is set by depressing a button, and selecting Reverse requires pressing a button while sliding the lever over and up to the left—as in some manual-transmission cars.

Good interior storage boasts a split-level glove box, squarish covered console box with USB and auxiliary inputs inside, and a large open space under the upsweep of the console. The console contains two covered cup holders and a slot for the wireless charging of cell phones. Storage pockets are included in all four doors. In the rear, pouches are attached to the backs of the front seats, and the pull-down center armrest houses two cup holders and a shallow covered bin.

The flat trunk floor extends far forward but narrows somewhat between the wheelhouses. Gooseneck hinges extend into the cargo area—but they are covered. The rear seat folds flat in a 60/40 split, albeit at a slight height above the trunk floor, and a bulkhead slightly restricts the passage from trunk to rear-seat area.

The 2017 LaCrosse’s higher levels of all-around likeability come at a cost–base prices are up significantly across the model lineup–but this redesigned cruiser’s handsome styling, new technology features, comfortable cabin, and newfound hints of athleticism justify its move up the price ladder.