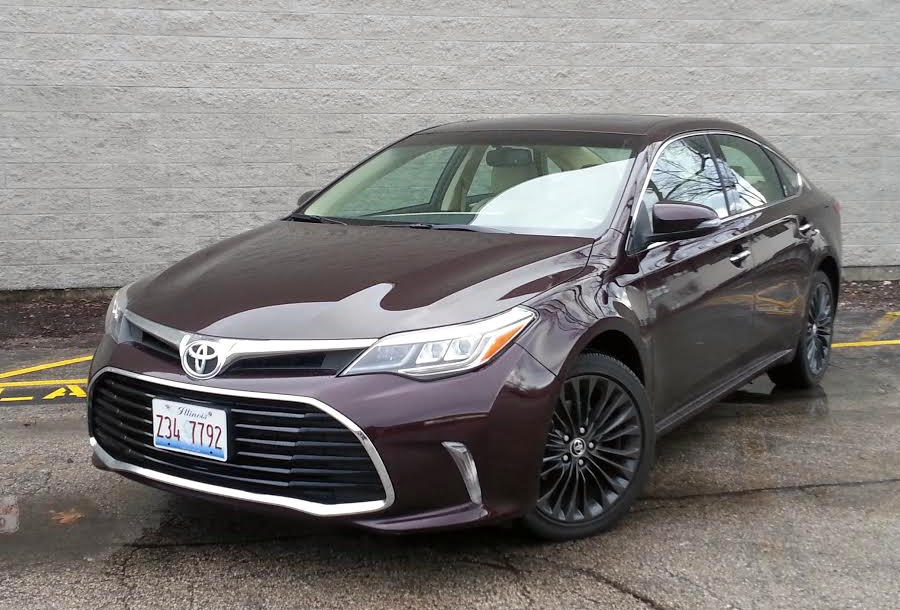 Our next-to-the-top-rung Touring tester started at $37,050 including destination, and that’s exactly where it ended up; it had no options — and really didn’t need any.

The not so good: No folding rear seat back, actuation of some controls

Toyota is mostly leaving well enough alone with the 2016 Avalon, its entry in the large-car segment. There’s a shuffled lineup, a revised front fascia, LED headlights on some models, “smoked” LED taillights, and revised suspension tuning. The rest is a familiar package. 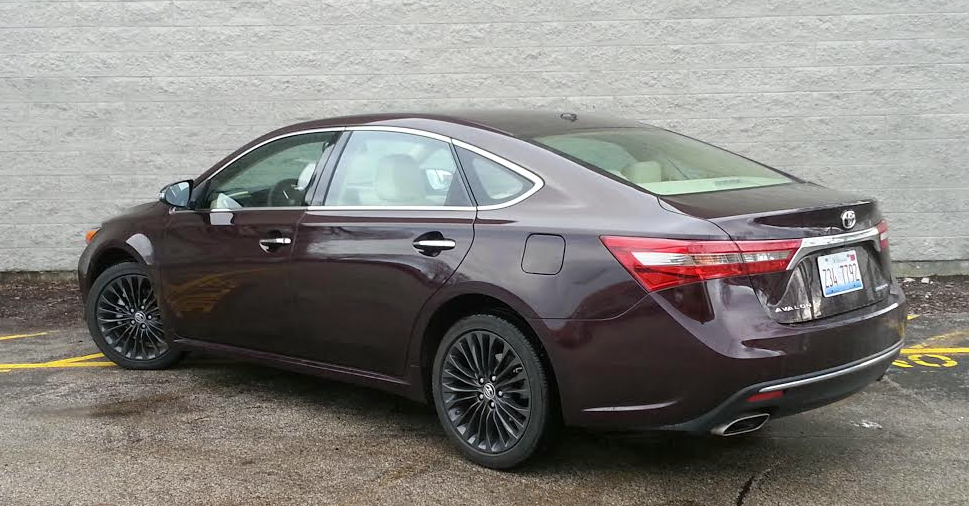 As the “sportiest” Avalon (two words that really don’t seem to go together), the Touring includes a firmer suspension and 18-inch dark-gray alloy wheels.

Consumer Guide® editors drove the second-from-the-top Touring model, which wasn’t far off in terms of dynamics and equipment from the 2015 Avalon XLE Touring that they sampled. It is what passes for the sportiest Avalon—and that’s giving the term “sporty” a very liberal interpretation. Ride tuning is a littler firmer than that of its linemates, which get a little cushier this year. Only the Touring fills the Avalon’s reshaped grille opening with piano-black bars. (Toyota can detail this car’s “mouth” any way it likes but it still reminds this driver of someone in the midst of oral surgery.) It is a model that receives the LED headlights.

At $37,050 to start, the ’16 Touring pretty much picks up where the former XLE Touring left off. In terms of standard equipment, that means 18-inch alloy wheels (finished in dark gray this year) wrapped in 225/45R18 tires; premium audio with a navigation system, 7-inch touchscreen, satellite radio, and Entune infotainment app suite; Bluetooth connectivity; paddle shifters for the automatic transmission; memory settings for the driver’s seat and external mirrors; a power moonroof; dual-zone climate control; leather upholstery; rearview camera; blind-spot monitor; rear cross-traffic alert; and dual chrome-tipped exhaust outlets. About the only item not on this car that was on CG’s 2015 test vehicle is wide-angle fog lights. 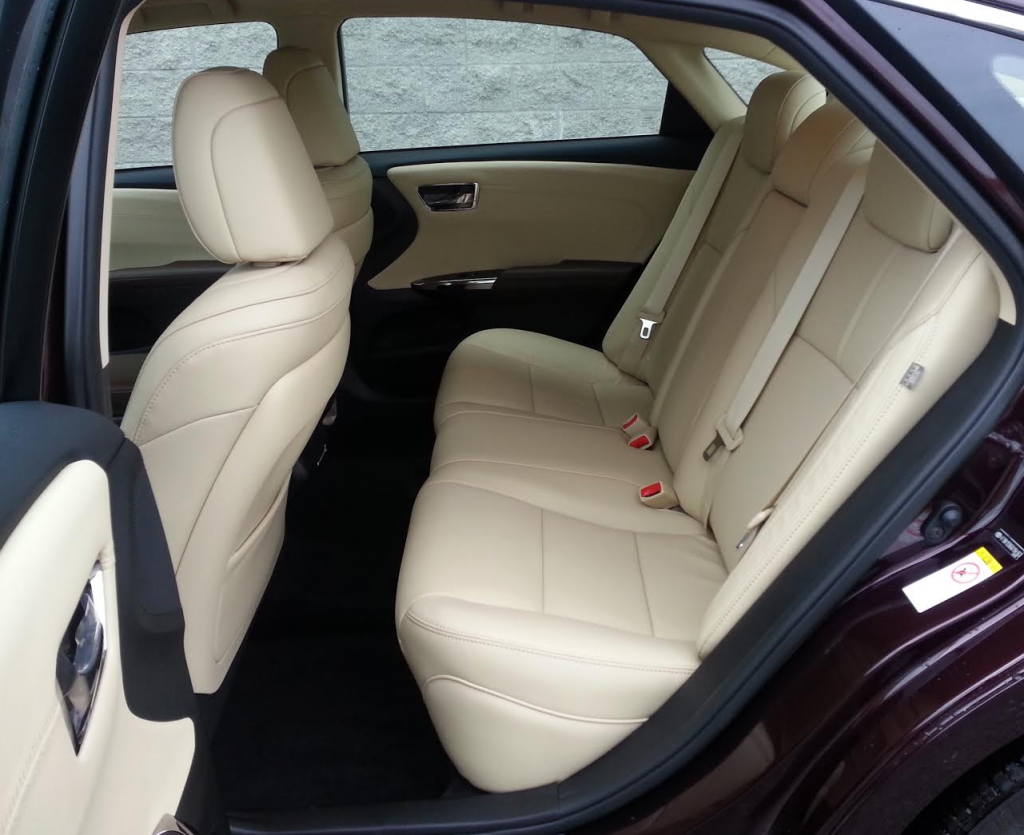 Avalon bests its Camry sibling in rear-seat room, largely due to greater width that allows more comfortable 3-across seating.

The powerteam is also carried over: a 3.5-liter dohc V6 that generates 268 horsepower and 248 lb-ft of torque, and a 6-speed automatic transmission. They link up for quiet, smooth power delivery in everyday driving. Console-mounted pushbuttons allow the driver to select “Normal,” “ECO,” or “Sport” driving modes. Sport mode increases throttle response and quickens the standard electric power steering; ECO restrains power flow and alters climate-system operation for more fuel efficiency. To this driver, the differences appeared to be fairly subtle. As for fuel mileage, he averaged 23.10 mpg from a 198.3-mile trip, 57 percent of which was under city conditions, and mostly in Normal mode. The V6 Avalon’s EPA ratings are 21 mpg in the city, 31 on the highway, and 24 combined.

Even with its slightly sporty tuning, the Touring’s ride is still quite compliant. Only the sharpest of road imperfections are felt with something akin to a jolt. Steering precision (and effort) tightens up marginally in the Sport setting. Braking is good.

Big-car room is particularly evident in front, with lots of seat travel and head room. Rear seats are spacious enough to hold 3 adults across, but head room—especially for a possible middle passenger—isn’t as good as in front as a result of the sloping roofline. Leg room at the two outboard positions is generous. Doors open wide for easy ingress/egress, and drivers can see well to nearly any angle. Seats are comfortable and supportive, and the interior makes ample use of soft-touch surfaces on the dash and doors. 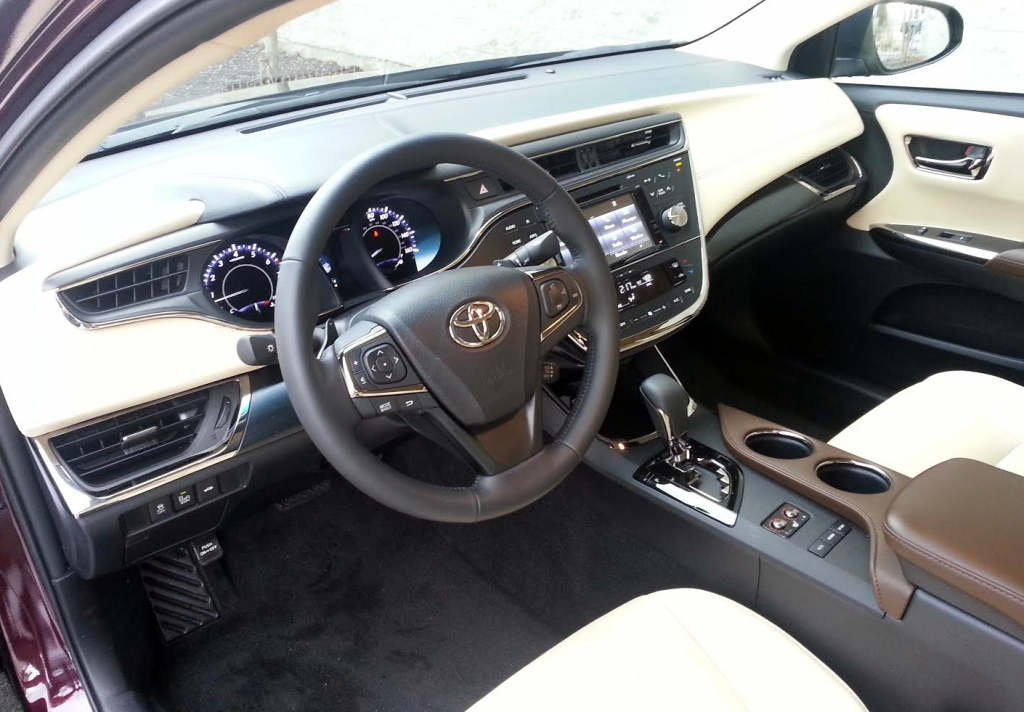 Three-tone cabin trim lends an upscale touch. Though most controls fall readily to hand, some aren’t the easiest to use.

Electronic “Optitron” instrumentation includes a thin-film-transistor information display set between the tachometer and speedometer dials, all of which are easily legible. Touchscreen audio selections aren’t particularly complicated to program and use. Climate controls, which are arrayed below the audio/navigation display screen, rely on a number of buttons, including repetitive-touch buttons to set temperature and fan speed. Seat-heater controls are a pair of small rheostats that pop up from the console; both are positioned close to the driver, so the passenger must make an awkward reach or ask for help from the driver. Auxiliary/USB ports are contained in a well with a sliding cover directly under the center of the dash. Also located here is the standard Qi-compatible wireless smartphone charger.

Interior storage up front includes a wide but not very deep glovebox somewhat obscured by the dash. There are decently sized door pockets, a large cubby with an adjustable tray under the console armrest, and two open cupholders in the console. Rear passengers are served by door pockets, pouches on the back of each front seat, and dual cupholders in the pull-down center armrest. The trunk is quite big with a wide opening for easy loading. Rear seats do not fold, however a central pass-through allows for long, narrow items to be carried.

Avalon delivers a good mix of comfort and equipment, and the Touring provides an alternative to those who otherwise might find the big Toyota a little too soft-riding for their tastes. It remains a must-see for anyone shopping in the large-car field.