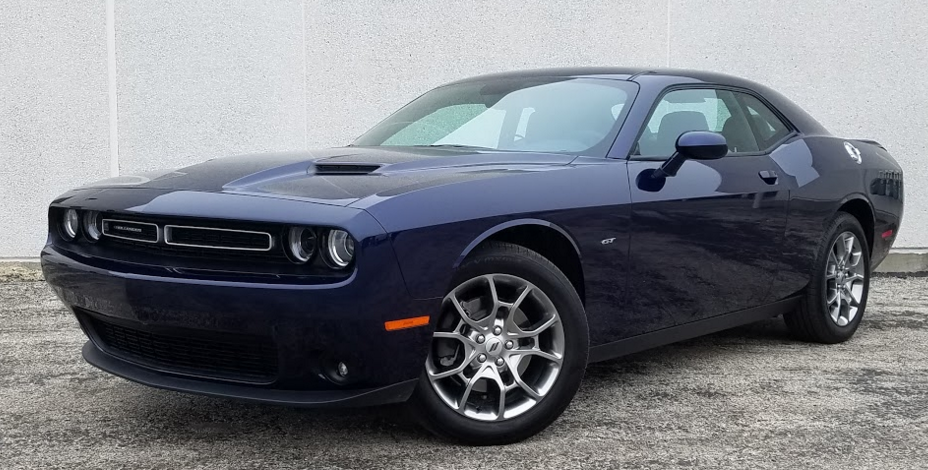 The not so good: Rear-seat entry/exit, high trunk liftover

The GT doesn’t start out as a “stripper,” as many normally optional features are standard, along with some sporty exterior elements such as the neat-looking 19-inch wheels shown, dual exhaust outlets, rear spoiler, and front hood scoops.

As it was tested during mild weather, the Challenger GT’s very notable all-wheel drive didn’t really make itself apparent. Oh, it may have had a very small part in helping the GT to its commendable 7.0-second 0-60 run, but it’s doubtful even a rear-drive V6 Challenger would be wasting precious seconds smoking its skins on take-off. In winter, however ….

In fact, it was in winter where I first experienced the Challenger GT at its press preview in Portland, Maine.

Normally, the last thing you want to see during a press event is white stuff falling from the sky. But in this case, it was actually appreciated … except for one thing.

In the spirit of fairness (OK, not really), Dodge had brought out a couple of competing sport coupes for comparison purposes, with the idea that we could drive them each through a little bit of snow to judge the differences. But we didn’t get a “little bit of snow” — we got a whole boatload of the stuff. Enough to close down the airport, in fact. Also enough to leave the competing vehicles looking like white-frosted cupcakes up to their muffin tins in powder … and completely immobile. 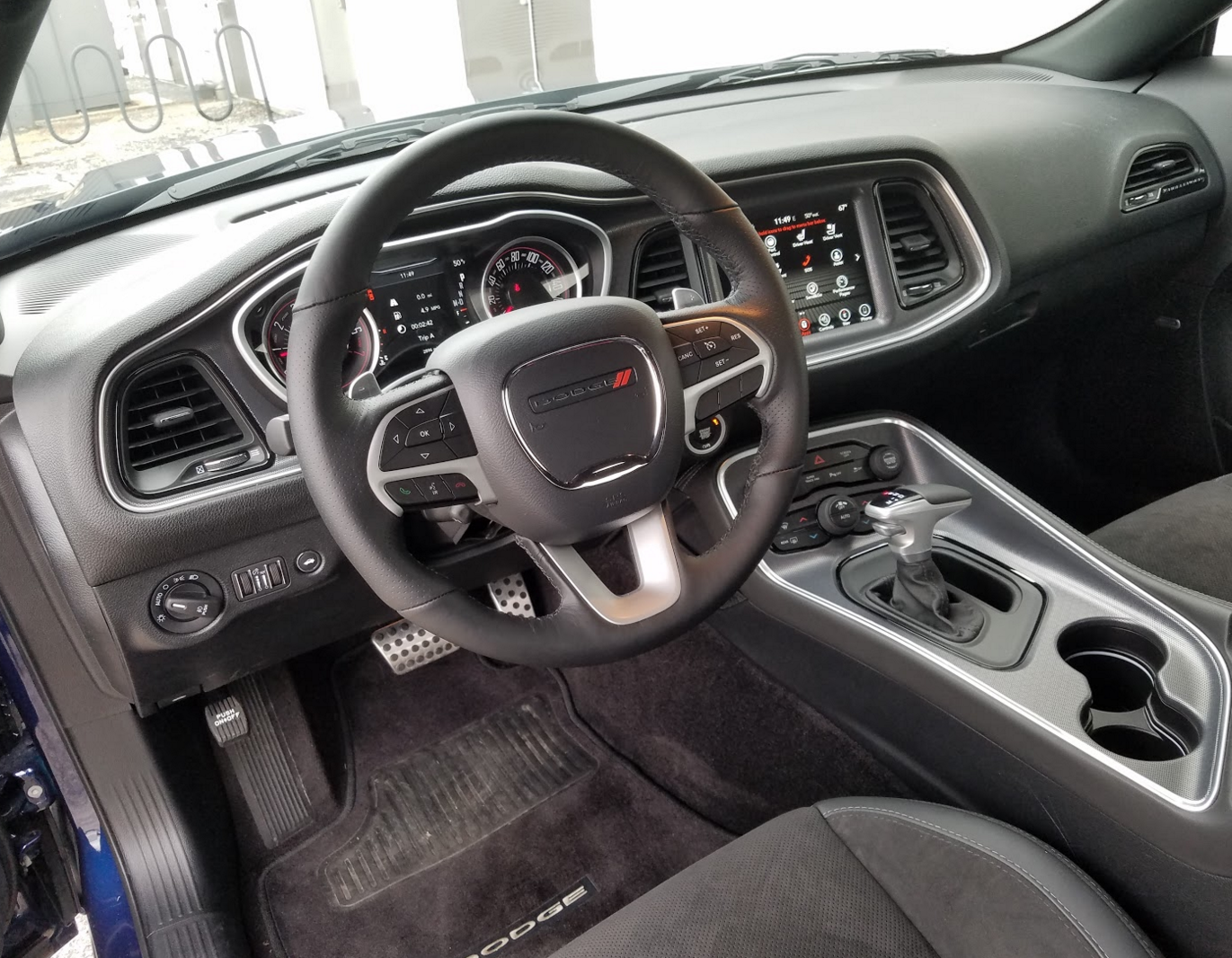 Our tester’s interior hosted nice materials and some sporty touches.

But now it was summertime, and the GT had to impress on its more mundane merits.

When parking, you have to leave a large gap between your car’s flanks and those of the car next to you, as (typical of 2-door coupes) the long doors have to be swung wide to open up a cavity large enough to crawl inside. Once there, headroom and legroom are fine, visibility is good except to the rear corners (though the standard backup camera helps here), and Dodge’s Uconnect infotainment control layout is easier to use than most. Materials are also fairly impressive, with many backed by deep padding or covered with sporty-looking trim.

Although Dodge trumpets that there are no other 5-passenger coupes offered with all-wheel drive, the back seat — as might be expected — is really not intended for adults. Oh, average-size ones will fit (at least, two will), but getting back there requires typical coupe contortions. The trunk is likewise roomy enough, but again, access is a bit tough, as the liftover is very high.

While the GT might well be the slowest member of the Challenger herd, it’s far from “slow.” The 305-horsepower 3.6-liter V6 provides a strong jump off the line (which most competing turbo fours can’t claim), and the 8-speed automatic transmission kicks down quickly for fine passing response. Standard on the GT are big, 19-inch wheels that would normally generate a jittery feel over bumps, but the car rides quite well, while handling and steering feel are sporty if not quite sports-car-like. 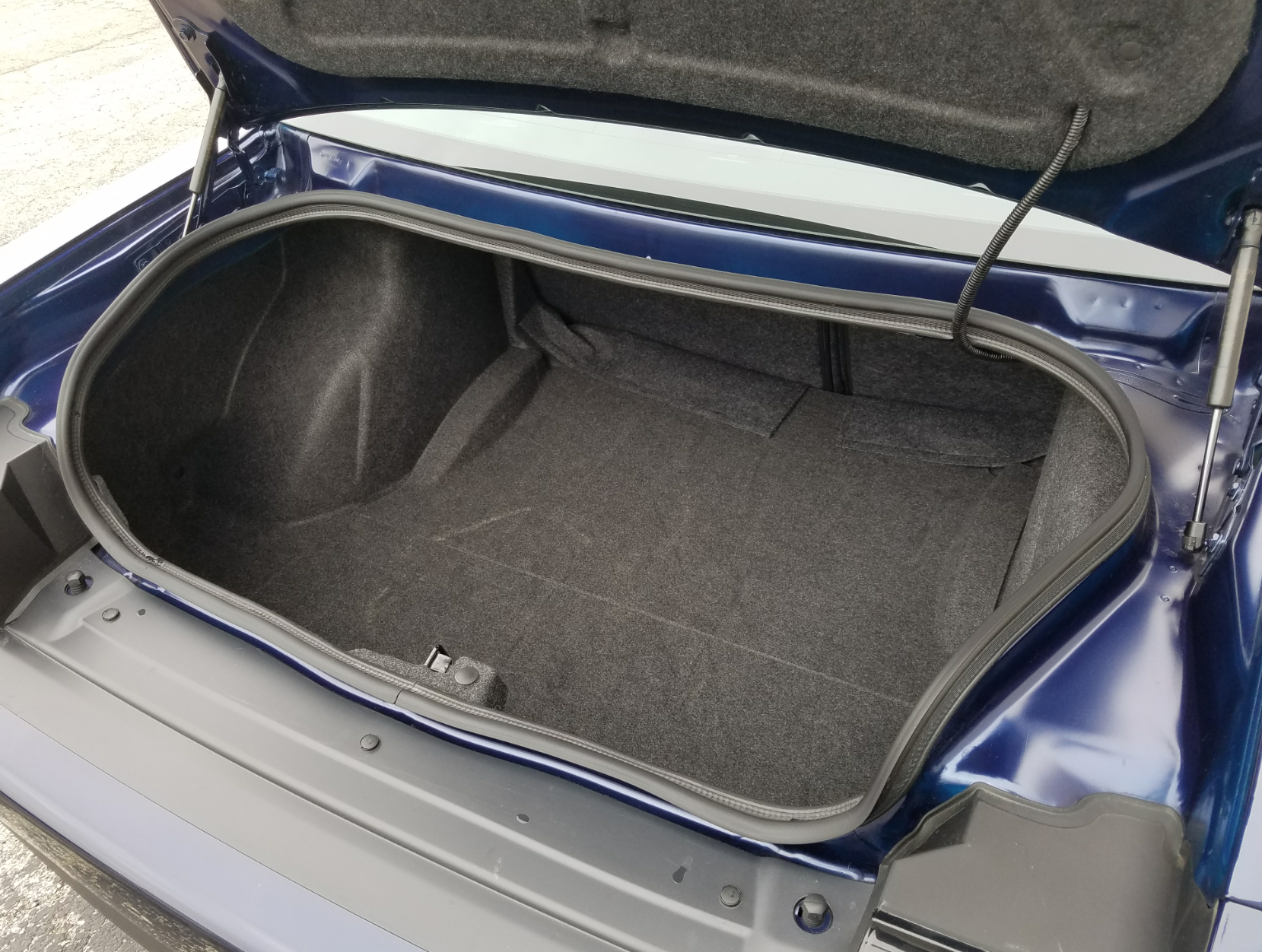 While the trunk is wide at the rear and reasonably large — and the trunklid lifts on upscale, out-of-the-way folding hinges — liftover is high and there’s a wide bumper to clear, making it awkward to load large or heavy items.

One thing that really impresses about the GT is that Dodge saw fit to include winter-related items as standard equipment — something often (and oddly) lacking in many AWD cars, despite that fact that they’re likely to be used in cold, snowy weather. These include dual-zone automatic climate control, heated mirrors, heated steering wheel, and heated/ventilated front seats (the driver’s with 4-way power lumbar adjustment). Other no-charge niceties include Apple CarPlay/Android Auto, keyless access and starting, satellite radio, and large 8.4-inch dashboard screen. As such, even the base GT (which costs about $6000 more than a base rear-drive Challenger) justifies its $33,395 starting price with a good load of goodies. Added to our tester were a sunroof (which one tall tester said cut into headroom a bit), GT interior package (including leather-wrapped steering wheel and up-level audio system), and a navigation system, all of which combined to add about $3500 to the tab.

Many folks living in the snow belt have felt it necessary to cross sporty coupes off the shopping list, as their combination of a heavy engine up front, relatively little weight over the rear drive wheels, and inevitably wide tires conspire to make winter driving a tricky proposition. But that’s no longer the case, and the best thing is, the Challenger GT is a pretty darn good coupe even without the advantage of its all-wheel drive.

Other than the fact that it rides a bit higher than other Challengers, the GT looks the part of a sporty coupe while offering the wintertime traction of an SUV.