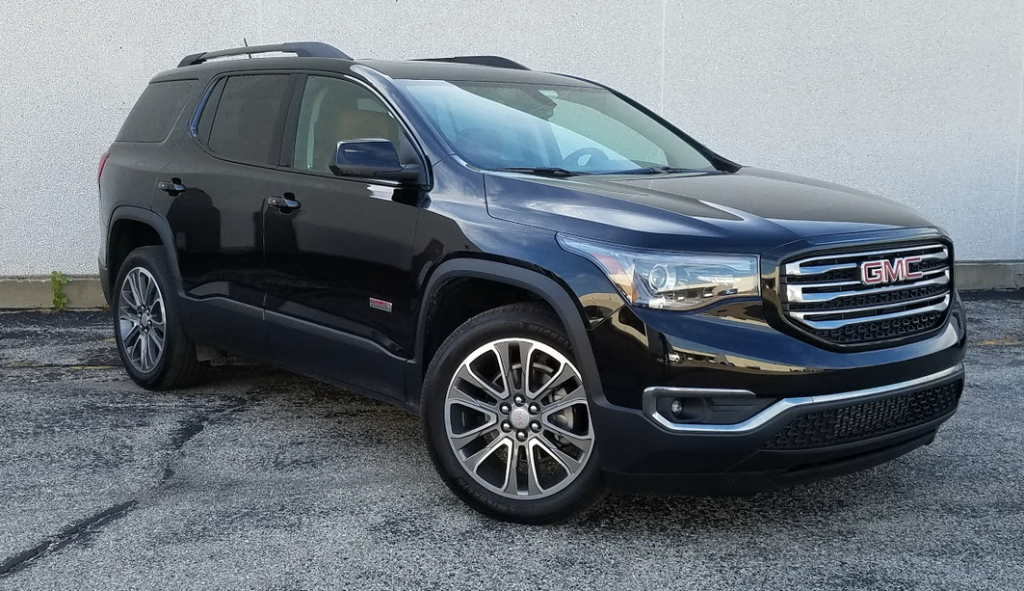 The good: Comfortable ride, given the handling composure

The not so good: Mediocre small-items storage, options add up fast

GMC is gambling that less is more when it comes to its Acadia midsize crossover SUV. As redesigned for 2017, it is 7.2 inches shorter from nose to tail, 6.6 inches lower from road to roof, and 3.5 inches narrower than before. As a result, the Acadia is lighter by about 700 pounds—and it’s cheaper, too. In fact, the base price on a top-of-the-line all-wheel-drive Denali is almost $3000 lower than that of its immediate predecessor. 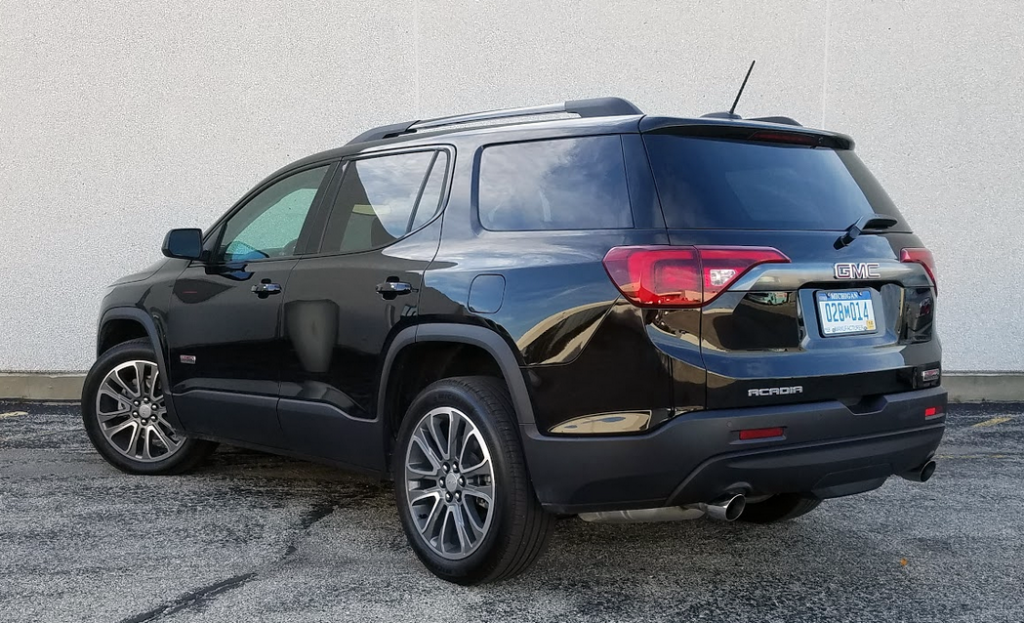 The downsized 2017 GMC Acadia is now approximately the same size as the Hyundai Santa Fe and Jeep Grand Cherokee.

Of course, there has to be quid for the quo. Trimming down the Acadia comes with some reduction of cargo and passenger space. While the first-generation Acadia featured standard 8-passenger seating, the new model comes with a maximum of 7-passenger capacity. The shrinking of the Acadia makes it possible for a 193-horsepower 2.5-liter 4-cylinder engine to take over as the new base powerplant. The 3.6-liter V6 that had been standard across the board is still available (it is standard in some models). It is substantially boosted to 310 horsepower for ’17, albeit with cylinder deactivation that helps improve fuel mileage.

The Acadia cabin is handsomely outfitted in SLT guise. Though the 2017 Acadia is smaller than its predecessor, its cabin still offers accommodations for up to seven passengers. However, Acadias with the All Terrain package are not available with 3rd-row seating.

Consumer Guide® editors got a crack at a new AWD Acadia with SLT-1 trim and the All-Terrain option package. Being an all-wheel SLT, the test vehicle came with the V6; as it was endowed with the All-Terrain setup, it was restricted to carrying five passengers. From a starting price of $41,450, the sticker stacked up to $47,465 with a number of options (including $1800 for All-Terrain) and delivery.

A 4G LTE Wi-Fi hotspot for the OnStar system is new in all Acadias. So is Apple CarPlay/Android Auto functionality for compatible smartphones. (Several new electronic safety features are added for 2017, but they are available only on the SLT-2 or Denali.) The SLT-1 steps up from SL and SLE models by way of an 8-way power passenger seat with power lumbar, perforated-leather seats, 120-volt power outlet, auto-dimming driver’s-side external mirror, auto-dimming inside rearview mirror, Bose 8-speaker system, side blind-zone/lane-change alert, rear cross-traffic alert, rear parking assist, 8-inch-diagonal color touchscreen for the IntelliLink infotainment system, and a universal home remote.

Acadias with the All Terrain package include specific 20-inch alloy wheels and leather upholstery with embroidered All Terrain logos on the front-seat headrests.

With its added V6 horsepower and lighter weight, the new Acadia moves smartly through traffic, and cruises easily on the expressway. There’s good on-ramp acceleration and passing power on tap, and the 6-speed automatic kicks down without undue delay to aid highway driving. EPA mileage ratings are 18 mpg in city driving, 25 mpg on the highway, and 20 combined. With a slight bias towards city-style driving (58 percent), this tester came close to the combined number at 19.26 mpg after a stint of 128.5 miles. 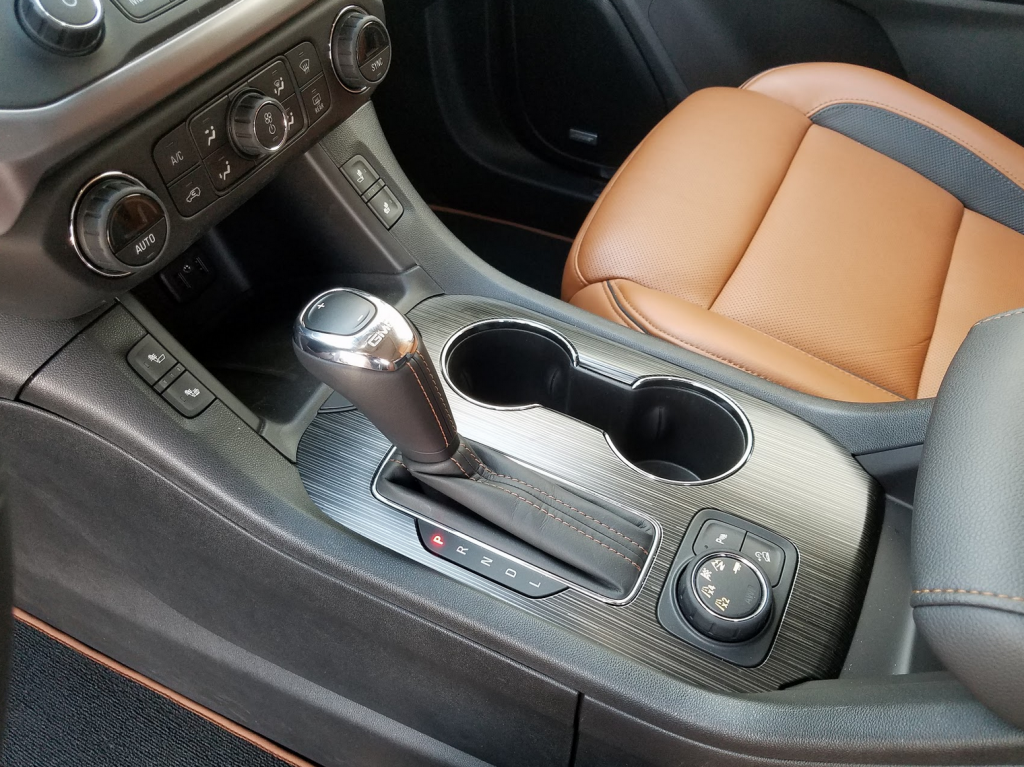 Included in the All Terrain package is GMC’s Advanced All-Wheel-Drive System, which is controlled via a rotary dial just aft of the gear selector.

The Acadia’s trimmer dimensions and reduced weight make for a fairly maneuverable and surprisingly nimble (for its class) people hauler. Bump absorption and braking are handled well for fewer bangs and jerks, and the only overt reminder that this is a still-considerable SUV may be a fair amount of lean in briskly taken turns. CG’s test truck had the console-mounted Traction Select drive-mode selector that lets the driver tailor steering and power delivery to road conditions and vehicle use. In addition to the default front-drive condition there are the choices of all-wheel drive, “Off-Road,” “Snow,” “Sport,” and—if equipped with a trailering package—“Trailer/Tow.”

The SLT-1 level delivers a fine level of comfort and convenience with more than a little upscale ambience. Abundant soft-touch material and bits of wood complement the leather seats and steering-wheel wrap. There was a nice level of cabin quiet in the test vehicle. The audio system with the 8-inch screen is easy to see, decipher, and program. Straightforward climate controls in front consist of dials for temperature and a few buttons for function selection, and second-row passengers have their own controls built into the back of the console.

If there’s a weak spot to the interior, it might be personal-item storage. The glove box is of decent size, but the covered console box is somewhat modest. At least it’s not cluttered with power and USB/auxiliary inputs, which are in an open space at the front of the console. Pockets in all four doors are downright small. A pouch is affixed to the back of each front seat. Twin cup holders are found in the console and in the pull-down center armrest in the rear seat.

Passengers enjoy good legroom in both rows. A flat floor makes three-abreast adult seating in the second row a distinct possibility. Headroom is quite good, too.

While overall cargo space has declined due to the Acadia’s reconfiguration, it still has a lot of space. With All-Terrain gear, the cargo bed features a flat floor and bumper-height loading, with some small-item accommodation under the floor mat. (Six- and 7-seat models have a third-row seat for two in this space.) The second-row seats, split 60/40, fold absolutely flat with the cargo floor, and can be dropped remotely via levers on the left sidewall of the cargo bay.

Going by appearances, it may look like there’s less to the GMC Acadia than there was before. Trying one out, though, shows there’s more to it than that.

The 2007-2016 GMC Acadia was a fine crossover, but it wasn’t much of a GMC, at least, not the sort of GMC marketing types would have had it be. Sure, it was roomy, refined, and generally inoffensive, but it wasn’t much to look at, and it didn’t feel very much like a truck. Actually, it felt a bit like a minivan. 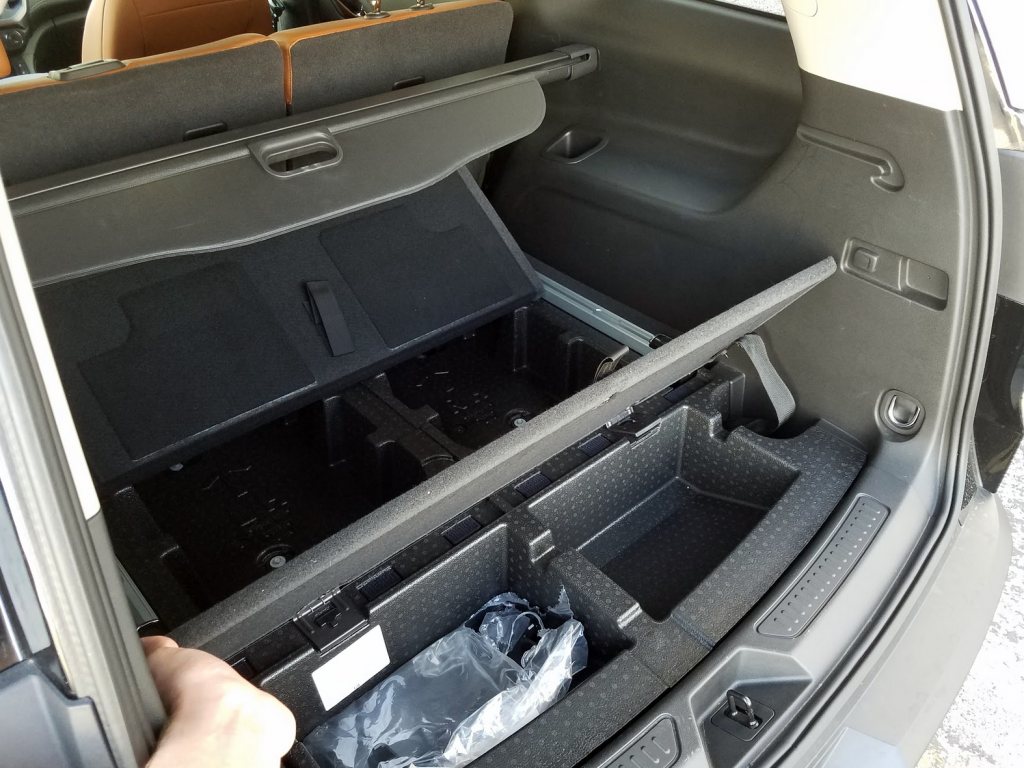 Included in the All Terrain package is a Cargo Management System which consists of a number of handy bins located under the load floor.

GMC has rectified that lack of manly character in the 2017 Acadia. Now shorter in length and significantly lighter, this new GMC feels sportier than its predecessor. It also feels a little like the Jeep Grand Cherokee, which is exactly what GMC wants it to feel like—and GMC brand representatives have said as much.

Though GMC makes no claims that the new Acadia will keep up with a Trail Rated Jeep off the pavement, our test truck with the All Terrain Package certainly looks the part. Outside, the package’s roof rack and specific alloy wheels help give Acadia a meaty, purposeful look. Inside, the two-tone leather treatment gives a Ponderosa Ranch feel to the cabin.

The All Terrain’s Advanced All-Wheel-Drive System is offered only with that package, and includes a cool Range Rover-like control knob that helps give the Acadia a little rough-weather/off-road credibility.

I like the new Acadia a lot. I like the new size, I really like the potent available V6, and I love the look. Prices rise pretty quickly once options are added, but certainly no more quickly than they do on a Grand Cherokee. Here’s hoping that the inevitable Denali version looks even cooler. 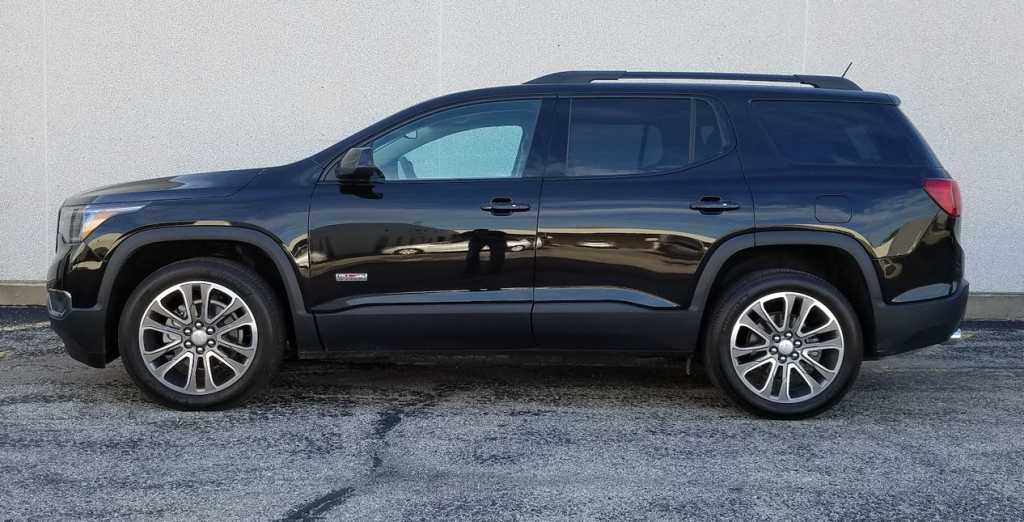 The next generation of the Buick Enclave, which will be sold alongside the Acadia in Buick/GMC dealerships, will not be downsized as the Acadia was. Look for the next-generation Enclave to be positioned further upmarket of the Acadia when it arrives for 2018.