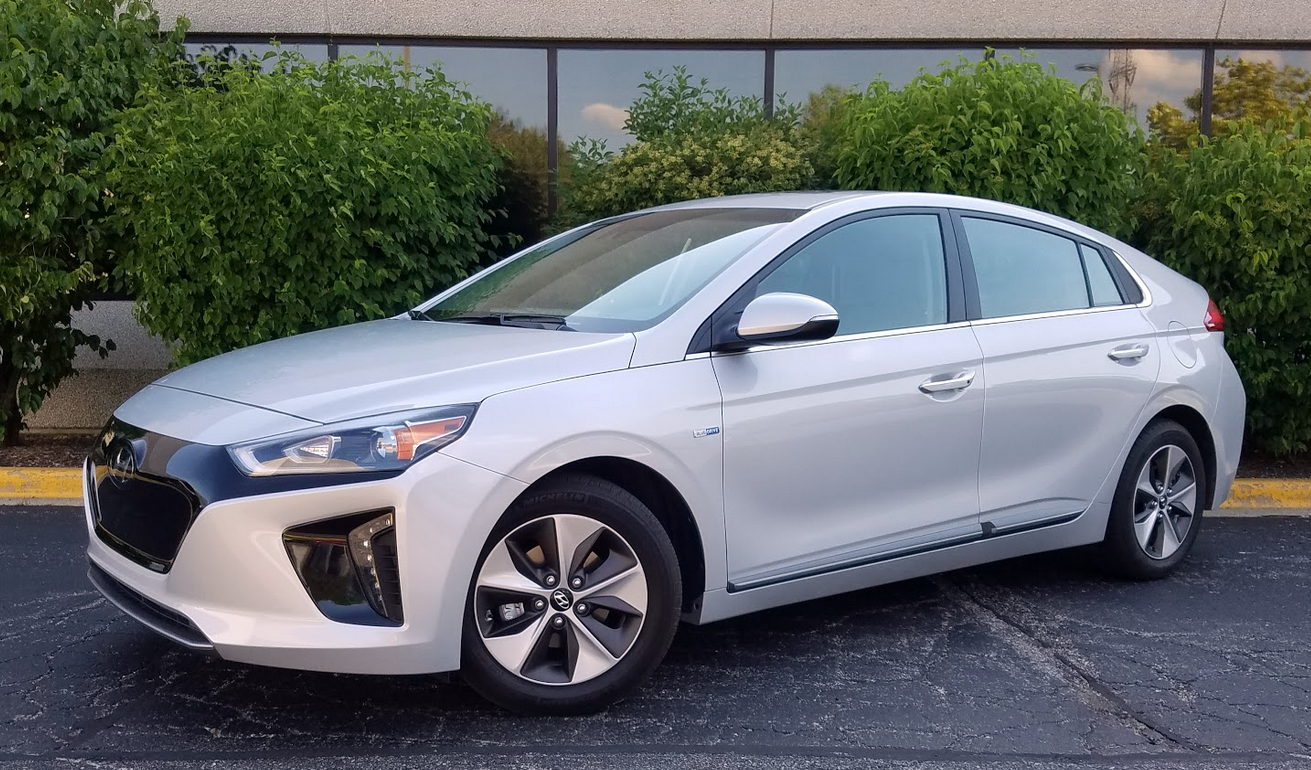 The not so good: Battery range is at the low end of the scale among the latest wave of mainstream EVs

With the dawn of the second age of the electric car having crested the horizon, one thing I can tell you about the EVs I have driven in recent years is that they didn’t let you forget that they were different. Compelled by the requirements of battery packaging, and the needs to pare weight and improve aerodynamics, they often had odd exterior shapes and/or offbeat interior layouts. And then there was the issue of range. Even in the most conventional EV that Consumer Guide® has tested, a long-term 2015 Kia Soul that basically looked like any concurrent gas-engine Soul, the knowledge that the distance I could cover was strictly limited—and “refueling” would take time—was always on my mind. 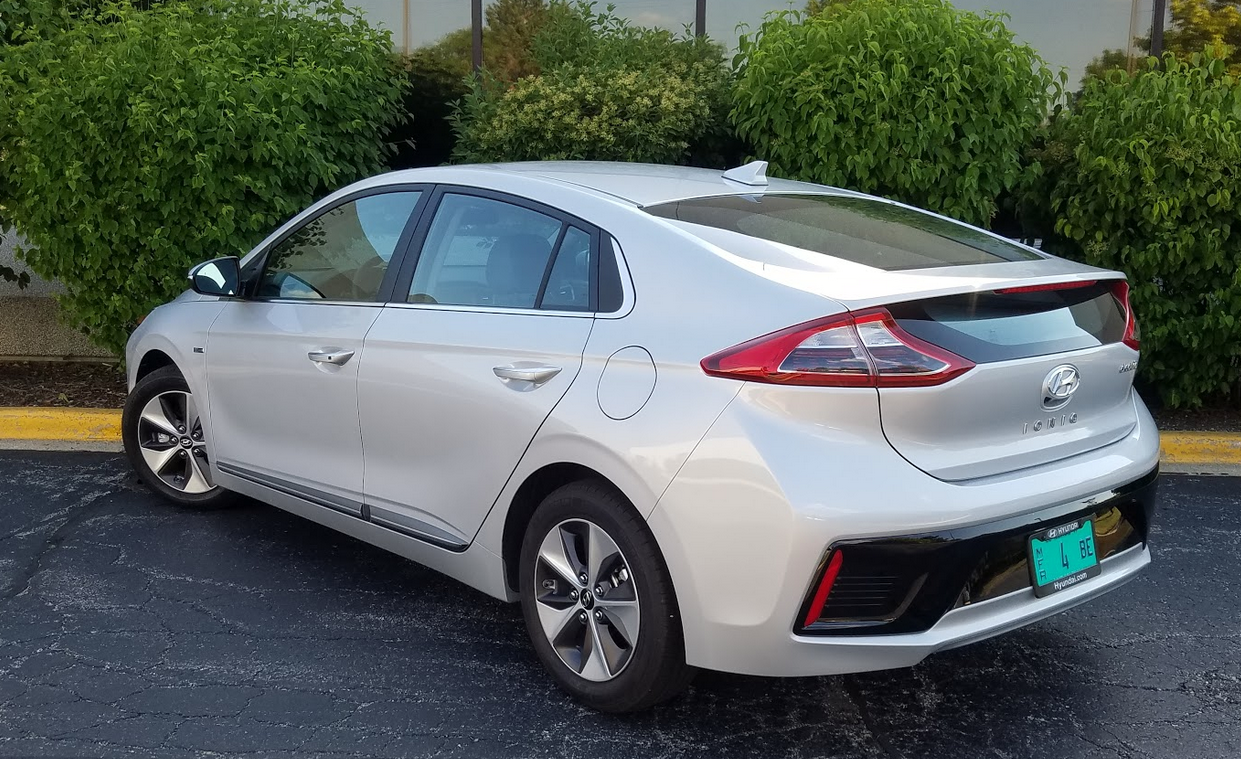 The Ioniq’s fastback roofline is a boon for cargo versatility, but the split rear window is detrimental to rearward vision.

The new Hyundai Ioniq Electric seems to want to change that. While it has its own styling, the compact 4-door hatchback has a contemporary body shape that would look at home draped over the gas-engine platform of just about any of Hyundai’s competitors in the small-sedan market. (The lack of a radiator grille is the key clue to the car’s true identity.) It can hold five passengers—there’s no sacrifice of seating to accommodate battery packs. Then, too, there’s enough extra battery range to maybe let your awareness slide for a day with no harm to either the car or your need to get around with it.

For the time being, the only people who’ll be able tell you if what I just wrote is true are Californians. The all-electric version is one of three varieties of the all-new Ioniq (the others being a conventional gas/electric hybrid and a plug-in hybrid), but it is being sold exclusively in the Golden State “currently” Hyundai says—and I’ll assume the pun was unintended. The Ioniq Electric comes in two trim levels, a base model and a better-equipped Limited like the one CG editors tested.

The Ioniq has a pleasant, nicely finished interior and, for the most part, a refreshingly conventional control layout. The push-button gear selector and wrist pad take some getting used to, but most of our testers acclimated quickly.

The Ioniq’s 88kW electric motor is rated at a modest 118 horsepower but it makes 218 lb-ft of readily available torque, so it gets around easily in city driving and performs competently on the highway. Of course it is quiet. The single-speed transmission is a shift-by-wire device activated by push buttons that rest flat on the center console. You could say that’s an odd detail that suggests this is no mainstream car, but many gas vehicles are sporting shift-lever alternatives of their own these days.

A 28-kWh battery is large enough to give a manufacturer-stated range of 124 miles. However, varying temperatures, accessory usage, and driving styles will change that. Testing the car in Illinois around the start of the summer, CG was seeing full-charge range projections in the low 140s. Any other pure electric this driver has tested has pretty much been good for a single round trip between home and work before needing to be recharged, even if partially. However, with the Ioniq, I was able to make two full round trips for a total of 125.8 miles (some of which were inherited from a colleague’s drive), including some high-speed expressway driving, and some use of lights, air conditioning, and radio. At the end of my test, 18 miles of range and 14 percent of remaining charge were indicated on the car’s system monitor. When I plugged in to the 240-volt “level-2” charger at Consumer Guide® Supreme World Headquarters, the car reported it would take four hours, 35 minutes to “top off.” The Ioniq has DC “fast-charge” capability for quicker turnaround.

MacPherson-strut front suspension and a torsion-beam rear axle are nothing new to small front-wheel-drive cars. Rolling on standard 16-inch alloy wheels and relatively tall-sidewall tires, ride in the 106.3-inch-wheelbase hatchback is fairly unperturbed. Steering is light, and somewhat lacking in road feel, but the car is about as maneuverable as others of its size. Four-wheel disc brakes are standard for decent stopping power, though the Ioniq does display the soft initial braking that is common to hybrids and electrics that use regenerative braking to cycle a little bit of energy back to the battery.

The Ioniq Electric’s pure-electric powertrain is good for 118 horsepower and a healthy 218 lb-ft of torque–enough to move this compact car around with decent authority. The included charger cable comes in a canvas carrying case.

Passenger space is good for a compact, and the rear seat is wide enough—and comfortable enough in the center—to accommodate perhaps three teenagers. A large glove box, a deep covered console box, door pockets, and pouches on the backs of the front seats are at the service of passengers. A sizeable floor-level opening at the front of the console seems like an ideal area for a purse. Cup holders are found the console and the pull-down rear armrest. Driving, audio, and climate controls display well and are easy to reach and use. Driver vision is good to most directions, with the possible exception of the rear corners. The sloped rear window continues down into the vertical space between the taillights, but like so many other such designs, a rear “spoiler” divides the panes and obstructs the straight-back view. There’s good flat-floor cargo space under the hatch. For more room, the rear 60/40-split seats fold, albeit not completely flat and with a very small gap between them and the cargo floor.

In some ways, you’ll think you’ve seen it all before. However, in a moderately priced electric car, that might seem new.

Regarding the Ioniq Electric’s stated range: The EPA has rated this pure-electric Hyundai at 124 miles of travel on a full battery charge. Despite sweltering temperatures hovering in the low nineties—which should diminish battery performance–I saw reported ranges of 130-135 miles during my turn in the car. Additionally, the in-car range reporting is consistently pessimistic, reporting range well below real-world results. Owners in mild climates will likely see 130-140 miles of range on a consistent basis.

The Ioniq Electric’s bobtailed fastback profile is a bit unconventional, but its composed driving manners and respectable range make it a pleasant, practical choice for an everyday commuter car.