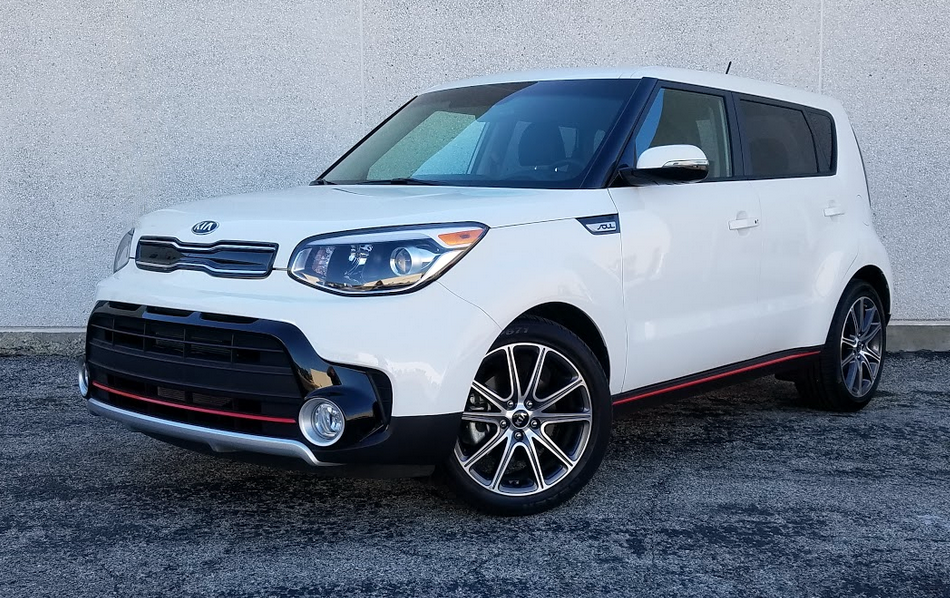 The not so good: Some turbo lag in low-speed driving

Why the Kia Soul is a Consumer Guide Best Buy

In case you are going strictly by the numbers and notice that the engine in the line-topping Kia Soul ! has gained a turbocharger and 37 horsepower for 2017, you might rightfully wonder if that turns it into the Soul !#?**&. Uh, no. It’s now clearly livelier than other Souls, and it’s better equipped for ’17, but it’s still a practical subcompact wagon at heart.

Previous “Exclaims” had a 164-horsepower naturally aspirated 2.0-liter 4-cylinder engine mated to a 6-speed automatic transmission, but the new one rolls with a direct-injection 1.6-liter turbocharged four of 201 horsepower at 6000 rpm. The transmission is a 7-speed dual-clutch automated manual. There’s not a mountain of torque—more of a molehill: 195 lb-ft that peaks up at 4500 rpm—and there’s obvious lag, so coming off the line the ! doesn’t begin to live up to its, uh, name until the turbocharger jumps in. Then, however, this most spirited Soul is fairly perky. The transmission kicks down promptly, so the car is ready for quick and safe highway maneuvers. 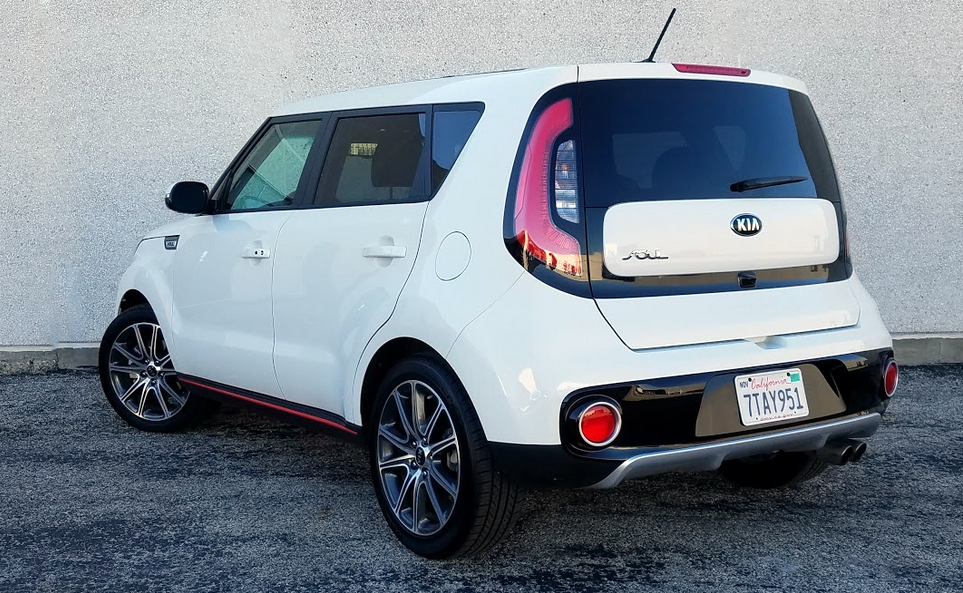 The ! trim level brings with it 18-inch alloy wheels, unique exterior trim, and a 71-horsepower bump over the base Soul.

One nice surprise came at the gas pump. This tester put 168 miles on the car, 60 percent in city-style driving, and averaged 28.2 mpg. While that was right in line with the EPA combined-mileage estimate of 27 mpg, it also greatly outdid the 23 mpg he got when driving an older Soul ! with the 2.0-liter engine and 6-speed under very similar conditions.

The powerteam isn’t all that’s new on the Soul ! in 2017. There’s revised front and rear styling (in fact all Souls get an appearance touch-up), plus the addition of standard keyless access and starting, and Android Auto and Apple CarPlay smartphone interfaces. Rear cross-traffic and blind-spot alerts are newly available in a $3000 Tech Package option that was not added to the test car.

In addition to the peppier acceleration, the Exclaim trim level adds lots of upscale interior-trim details that provide a satisfyingly sporty ambiance. The back-seat area is spacious enough to seat most adults in comfort.

Among items that distinguish the ! from other Souls are 18-inch alloy wheels and bigger front brake discs. On the whole, ride and handling aren’t much different from other Souls—and this driver has spent a bit of time lately in Consumer Guide®’s extended-use EV version—but cornering grip is better. Unfortunately, braking is somewhat spongy and requires a good, deep pedal press to get stopped.

Distinct external-appearance features include lower-body moldings and gloss-black bumper inserts with red accents, and twin chrome exhaust tips. Inside are black cloth-and-leather seats and a flat-bottom leather-wrapped steering wheel, both with orange contrast stitching; a leather-trimmed shifter knob; and a 4.3-inch thin-film-transistor vehicle-info display in the instrument cluster.

Soul’s second-row seatbacks fold in a 60/40 split to open up a surprisingly spacious cargo area. A wide hatch opening allows for easy loading of larger items.

In other respects, the package is familiar Soul from the vehicle line’s 2014 reworking. Headroom is abundant, there’s enough seat space and a low-enough floor tunnel for 3-across adult seating (for short hops at least), and sufficient legroom in the outboard rear seats for adult comfort. Doors open wide for easy entry and exit, and large windows maximize vision. There’s good space on the flat cargo floor, with some underfloor storage for small items. Second-row seats fold in a 60/40 split, albeit not completely flat, but when they do there is lots more space. Personal incidentals can be stored in a good-sized glove box, a deep (but narrow) covered box that doubles as a console armrest, and a pouch attached to the back of the front passenger seat. There are pockets in all doors, though the rear ones are essentially bottle holders. Pairs of cup holders are found in the center console and in the pull-down center armrest in the rear seat.

Controls are easily accessible for the driver. Audio settings are simple to program. Voice commands that this reviewer used to change stations were answered correctly on the first try. Controls for the standard automatic climate system reside below the screen, with a central rotary dial to set the temperature and large buttons for fan, mode, and other functions. Interior materials make the Soul feel a bit more upmarket. Flexible soft-touch surfaces cover the dash and much of the door panels for a better-than-the-price look and feel.

And that price is . . . $22,650 to start—which is $2350 more than the tab for the ’14 Soul ! that CG tested but still great for this amount of comfort, equipment, and utility. Other items covered by that figure are a rearview camera that displays on the 7-inch touchscreen, Kia UVO infotainment system, satellite radio, tilt/telescoping steering column, rear cargo cover, automatic headlights, fog lights, and privacy glass. There are a couple option packages for the ! and a number of separate accessories but the test vehicle added just carpeted floor mats and delivery for a final price of $23,620. Thus, even in the top trim level it can be fairly easy to find your Soul mate. 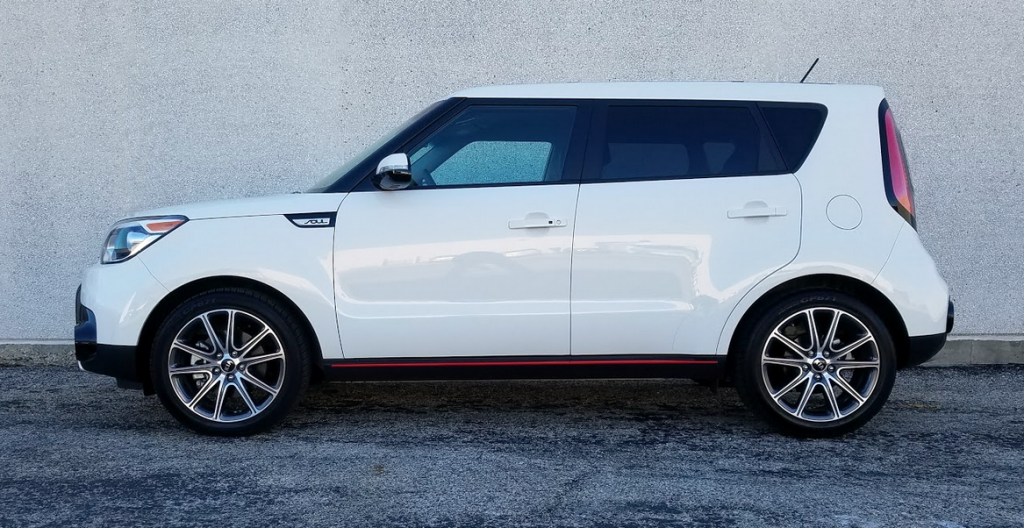 Thanks to its boxy, upright design, the Kia Soul offers a spacious cabin that belies its subcompact footprint.