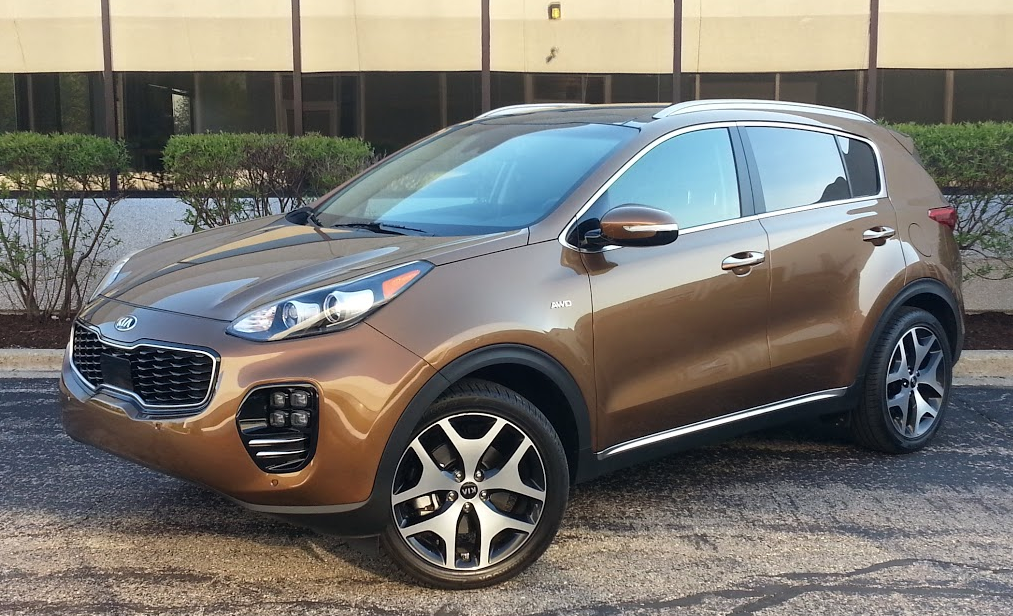 The not so good: Mediocre fuel economy for class

If Kia didn’t exactly make the 2017 Sportage a compact crossover sport-utility vehicle that you can’t live without, at least they made it a small SUV that you can definitely live with—and happily at that. 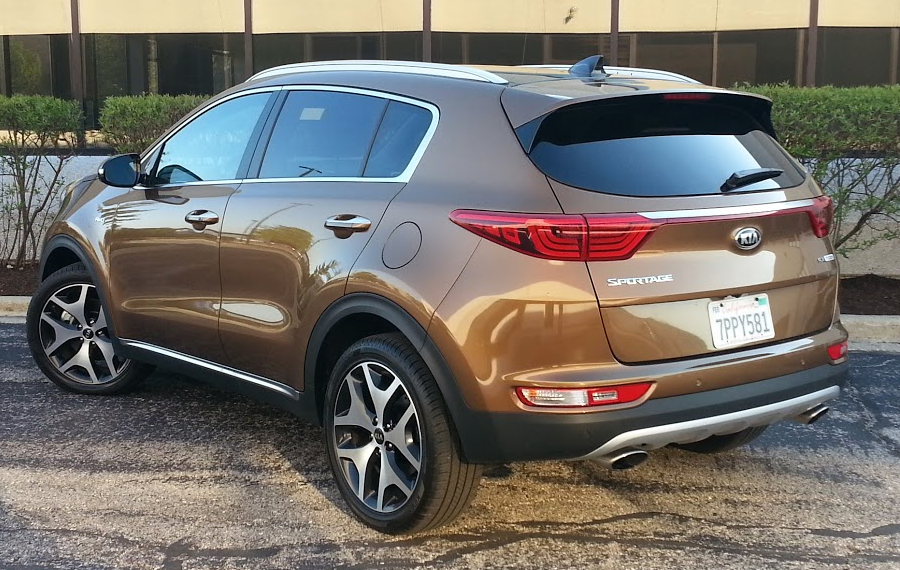 Our tester’s striking Burnished Copper paint gave off a luminous glow, and changed its hue in interesting ways under different light conditions.

Consumer Guide® tried out a top-end SX AWD. With nothing added but the $895 delivery charge (there are no option packages for the SX, and only a handful of stand-alone storage and appearance extras), the bottom line still came to a considerable $34,895. That’s a solid $7000 more than the tab for a mid-level EX with the same driveline. Note that at all three Sportage trim levels all-wheel drive with a locking center differential adds $1500 over the price of a comparable front-drive model. 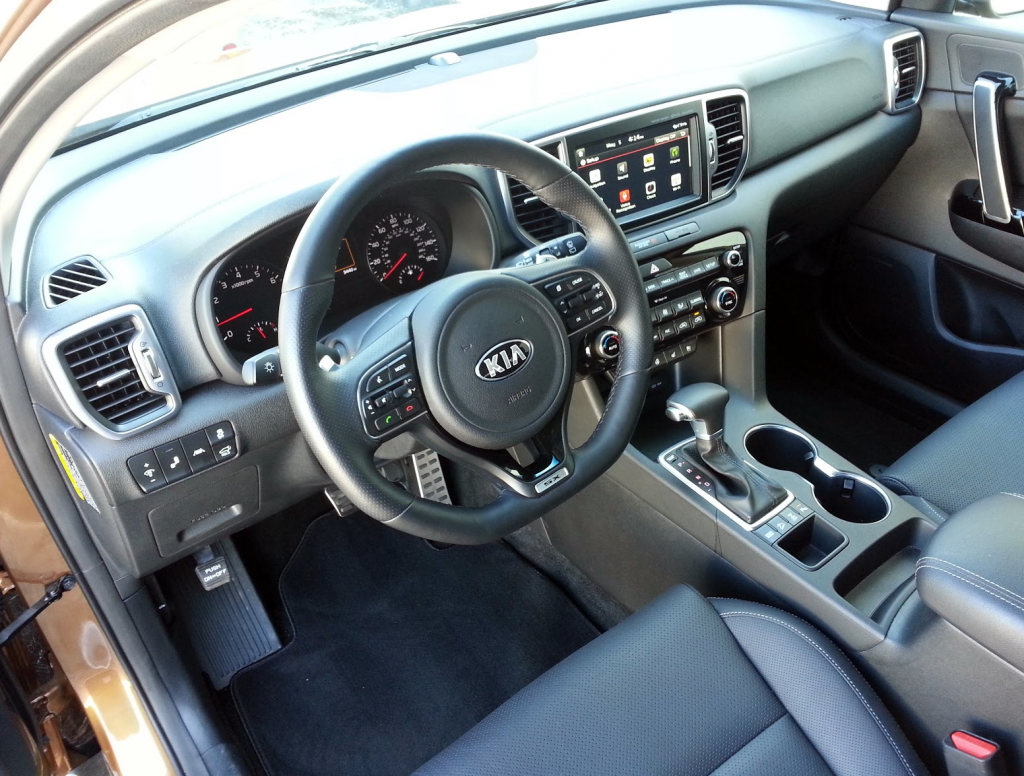 The SX cabin is nicely appointed, and surprisingly big & tall friendly for a compact crossover.

The list of what that extra outlay buys starts with a turbocharged 2.0-liter four-cylinder engine, 19-inch alloy wheels, and a space-saver spare tire. Unique SX appearances touches include a grille with satin-chrome highlights (satin chrome is used for other body brightwork, too), and a chrome-finish tip for the dual-outlet exhaust. Further external features run to power-folding mirrors with LED turn signals, a panoramic sunroof, hands-free power liftgate with adjustable height setting, high-intensity-discharge projector-beam headlights with “Dynamic Bending” and high-beam assist, and LED foglamps and taillamps.

A row of buttons below the touchscreen summons audio, phone, navigation, and other functions. A separate tuner dial lets occupants quickly select radio stations, then save them with a press on the screen—no ritual of intermediate steps necessary, thank you very much. Another row of function buttons plus rotating knobs for temperature control work the standard dual-zone climate system. Indeed, there are a lot of buttons on the Sportage SX dash. Analog tachometer and speedometer gauges are big enough for clear legibility, and they flank a thin-film-transistor driver information display activated by thumb buttons on the steering wheel.

Cabin materials are a mix of premium (leather seat coverings) and the prosaic (hard plastic on the lower dash, console, and tops of the rear doors). With just a few hints of brightwork, the black interior in CG’s test vehicle appeared a little stark. Soft-touch materials cover the top half of the instrument panel, the tops of the front doors, and the armrests and centers of all four doors. 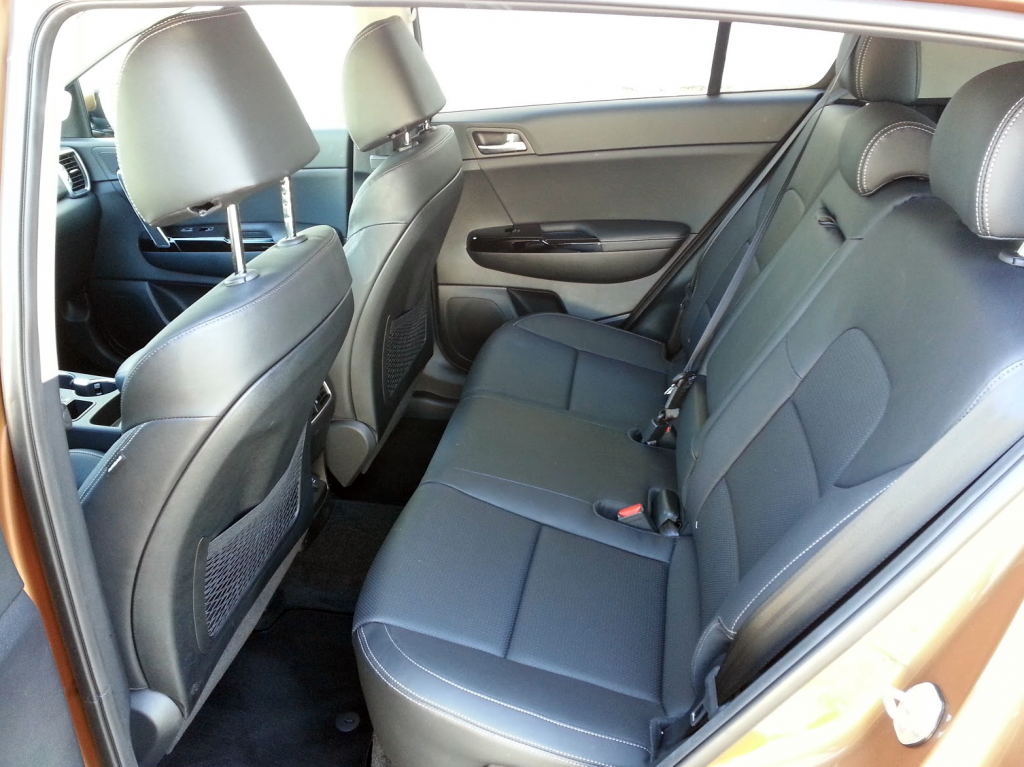 As in most vehicles in this class, rear-seat legroom is dependent on the location of front-row seats. That said, Sportage boasts one of the roomier 2nd-rows in its class.

While the 2.4-liter four-cylinder engine found in lesser Sportages returns largely unchanged from prior models, the SX’s 2.0-liter powerplant has been retuned for better midrange performance. Formerly at 260 horsepower, it now makes 240 at 6000 rpm—or 237 with all-wheel drive. However, torque is relatively higher. It is rated at 260 lb-ft at 1450-3500 revs, which is a loss of just nine lb-ft from before. As such, the turbo engine delivers enough power to make this almost-4000-pound vehicle feel generally peppy, with a “Sport” setting on the Drive Mode Select system trying to add a little more sizzle. Like all Sportages, the SX comes with a six-speed automatic transmission. EPA fuel-mileage ratings have improved a bit for the turbo four, to 20 mpg in the city, 23 on the highway, and 21 combined for the AWD model. This driver averaged 21.18 mpg from his run in the truck, a 221.6-mile trip that consisted of 67 percent city-type motoring.

The 2017 Sportage employs a new architecture that Kia says is significantly stiffer than before. CG’s tester rode confidently over all but the worst surface imperfections, and even then with quick rebound to equilibrium. In determined turns, like on expressway ramps or hard 90-degree moves to a cross street from a standing start, the Sportage leans somewhat but it recovers promptly without sawing the wheel back and forth to regain balance.

Headroom is very good throughout the cabin but legroom is better in front than in back—especially if front passengers track their seats far back. Seats are comfortable at the four corners of the cabin. Adults-to-be can likely fit three-abreast in the rear seat, but grown-ups will find this a harder sell. Wide rear roof pillars are the only impediment to good all-around vision for drivers. Entry and exit didn’t present a challenge to this reviewer in either row.

Cabin storage is good but not great. There’s some useful space in the glove box and covered console cubby. On the other hand, there are some small wells in the console, small pockets (with bottle holder) in the front doors, and bottle-holder-sized receptacles in the rear doors. Open cup holders are found in the console and in the pull-down armrest in the middle of the rear seat. Meanwhile, cargo hauling benefits from a wide hatch opening and bumper-height loading onto a flat floor. Rear seats are split 60/40, and when both are down, available cargo room very nearly doubles to 60.1 cubic feet. The seats fold flat. Lower-line Sportages, which have tire-inflator gear in place of the SX’s spare tire, have underfloor storage capability that the top-line model lacks. 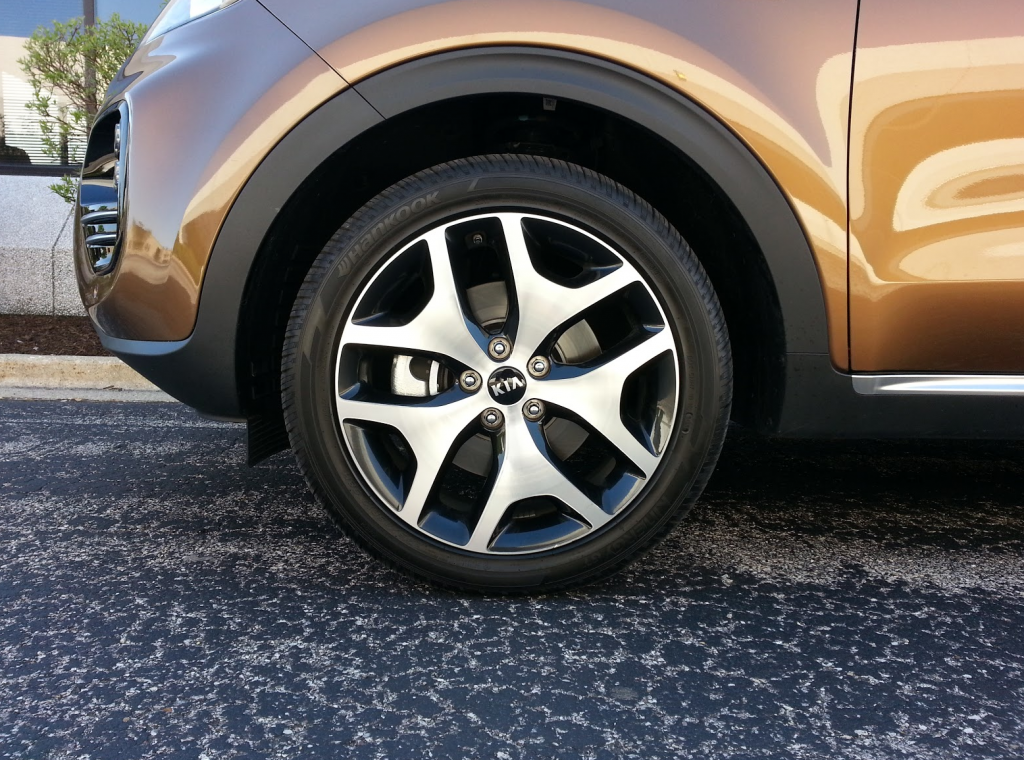 All in all, the new Sportage is an appealing though not perfect package in the small-SUV field. Springing for the loaded SX is the only way to guarantee getting all the latest tech features. However, many of them—particularly the safety systems—can be added at extra cost to the EX, which starts with a considerable price advantage.

Impressed by the ride quality and power available around town. I had hoped for better gas mileage, but saw just over 20 mpg in mostly city driving. Folks outside of the Snow Belt will want to consider losing the AWD and picking up an EPA-estimated 3 mpg on the highway.

The redesigned Sportage is 1.6 inches longer than its predecessor and cuts a fairly sleek profile, as compact SUVs go.