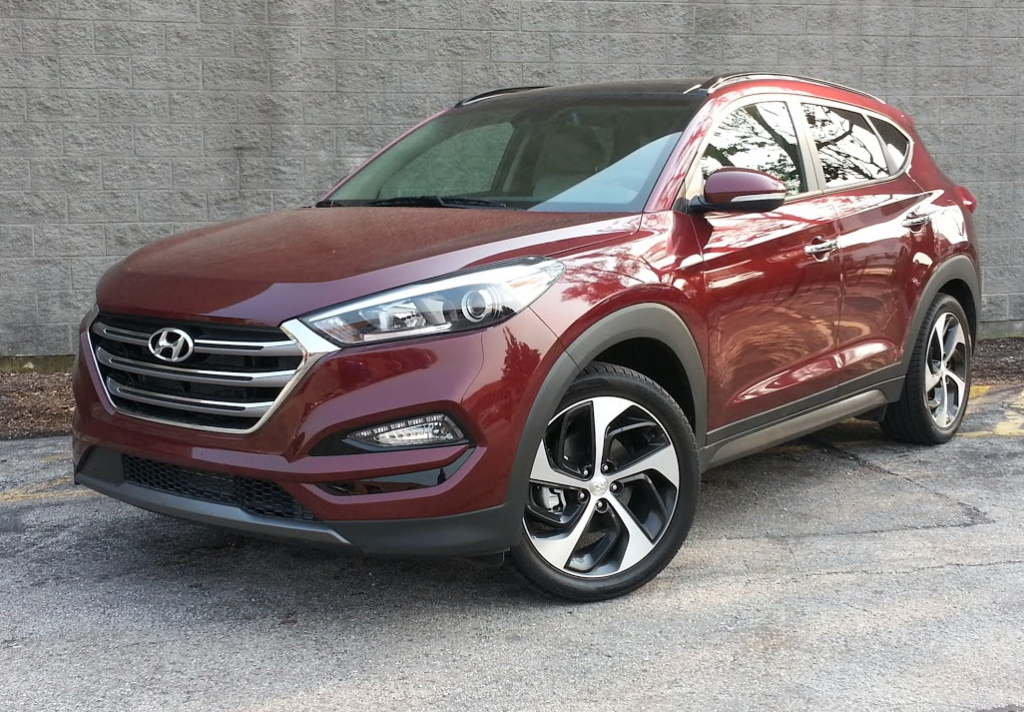 For 2016, Hyundai has done some serious work on its Tucson compact crossover sport-utility vehicle. Within the revamped sheetmetal there’s a redone control layout and a new engine/transmission pairing found on most models. All the while, the Tucson remains a useful, pleasant-to-drive choice in its segment. 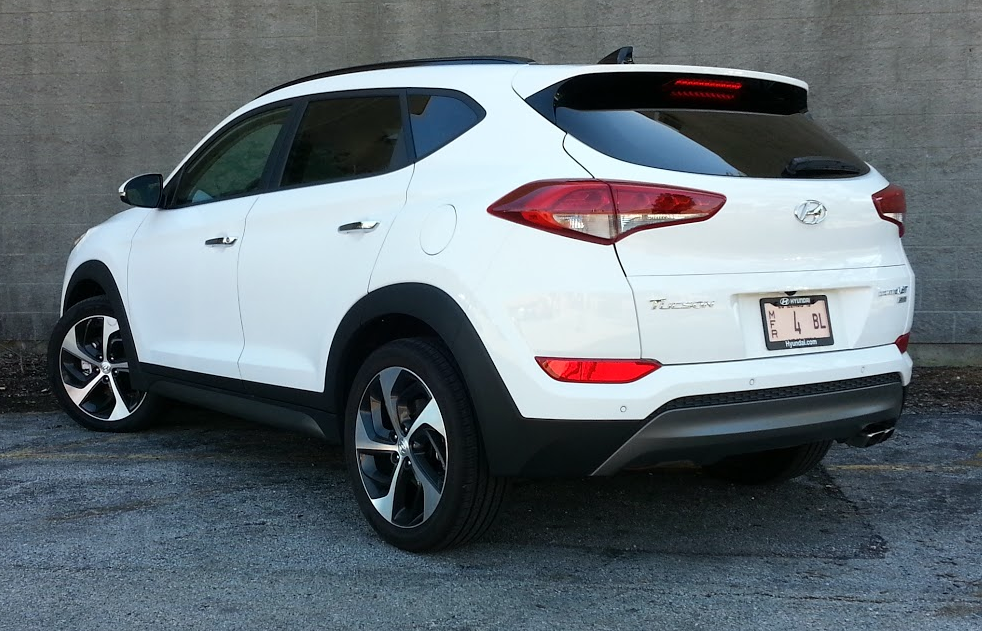 Consumer Guide evaluated two 2016 Hyundai Tucsons within a couple weeks of each other, each of which arrived in top-of-the-line Limited trim. The Ruby Wine (red) Tucson was a front-drive model, while the Winter White Tucson featured AWD.

Within a few weeks’ time, Consumer Guide® editors sampled nearly identical top-level Limited models,  one with front-wheel drive and one with all-wheel drive. As 2015 vehicles, high-end Tucsons would have had a naturally aspirated 2.4-liter 4-cylinder engine of 182 horsepower with a 6-speed automatic transmission. However the 3 top 2016 Tucson models sport a turbocharged 1.6-liter that makes 175 horsepower at 5500 rpm and 195 lb-ft of torque between 1500 and 4500 revs. This engine is linked to a 7-speed dual-clutch automatic. (The last vestige of the previous powerteams is found in the entry-level SE, where a 164-horse 2.0-liter four and 6-speed automatic are still employed.) 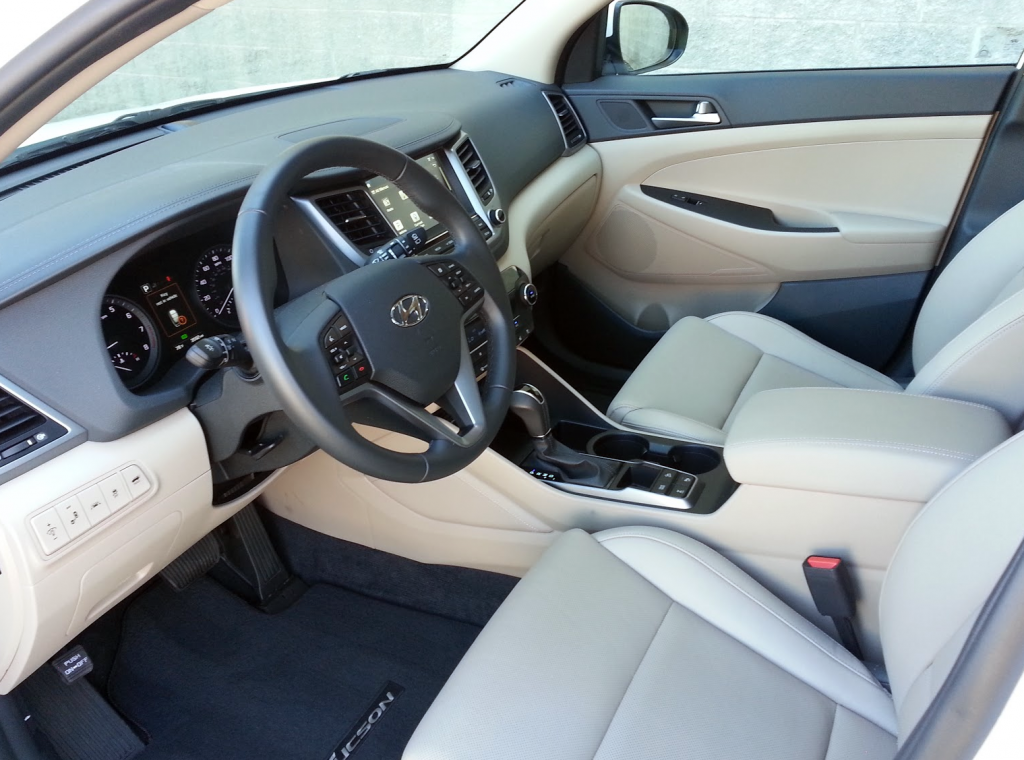 Tucson’s cabin is both roomy and well appointed.

There’s decent midrange punch from the turbo engine, and the dual-clutch autobox shifts promptly. A console button allows drivers to select “Eco” or “Sport” driving modes as alternatives to the basic calibrations. You see this on all kinds of vehicles today, and in some of them, these selectable modes make a clear difference in performance. This isn’t one of them. Tapping into Sport mode didn’t seem to do much of anything that this driver could sense, except perhaps facilitate slightly livelier starts from a standing stop. When driving the AWD test vehicle, Sport was actually fairly annoying in stop-and-go commuting on a badly congested expressway. At each tap of the accelerator, the Tucson quickly leapt to life just as it was time to brake for the next hiccup in the traffic. Clicking back into the base mode toned down these spikes in acceleration.

One of the benefits of this powerteam is supposed to be improved fuel mileage. Compared to the former 2.4/6-speed package, EPA estimates are higher for the new engine and transmission: 25 mpg in city driving and 30 on the highway with front-wheel drive, and 24 city/28 highway with the all-wheel drivetrain that adds 130 pounds to the vehicle. With the front-drive Tucson, this tester saw 25.6 mpg from a stint of 156.9 miles, 59 percent in city-style driving—5.1 mpg better than he achieved in a 2.4-powered 2014 Tucson from a trip of similar distance. However, the 2016 AWD Tucson performed arguably better. In a run of 165.5 miles with 78 percent city driving (and frequently 4 people aboard) it returned 24.75 mpg.

Inside, there’s a completely new instrument-panel layout. As it now comes with a standard navigation system, the Tucson Limited features a specific 8-inch touchscreen (though an array of physical buttons below it is used to summon various functions monitored on the screen). The dual-zone climate system uses a pair of dials for temperature settings, but 2 long rows of buttons for things like fan speed, fan mode, defrost, etc., give drivers a lot to do in addition to that driving thing. 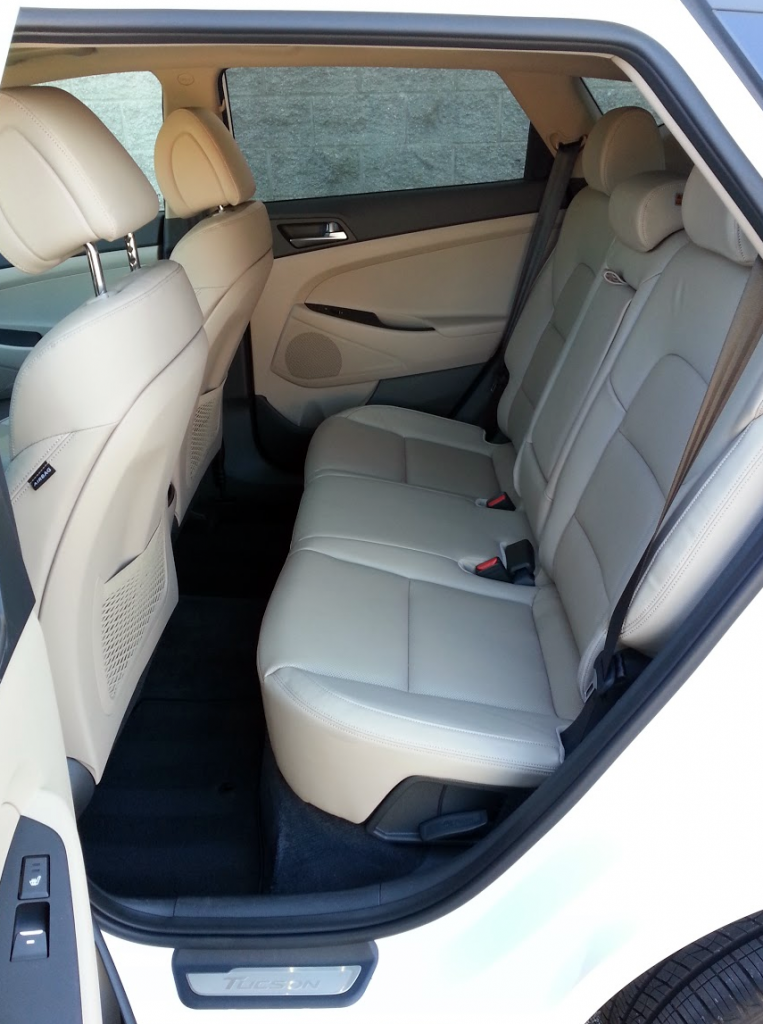 Limiteds are equipped with a “premium” instrument panel. There’s plenty of soft-touch material on it, and a triangular pad is affixed to the driver’s side of the center console, apparently to soften any extended contact that a driver’s right knee might have to make with this area. Lower portions of the doors and the console have their share of stiff plastic, but there are slightly padded surfaces in evidence where passengers are most likely to contact the vehicle. Leather upholstery is standard in the Limited, and front seats are heated and feature power adjustment.

Front passengers enjoy good leg and head room. If need be, 3 adults can fit in the rear, and those in the 2 outboard positions won’t be cramped. The angle of the rear seat backs is adjustable. As in recent years, the Tucson has what’s become clichéd rear-roof-pillar styling for small SUVs these days, which means an obstructed view at the far corners. Entry and exit is easy through all 4 doors.

The center console includes a pair of cup holders, a large cubby under a padded lid, and a small open bin at the front with USB and power plug-ins. Rear-seat occupants can avail themselves of net pouches on the back of both front seats, plus a pull-down center arm rest with two cup holders molded in. Pockets in all 4 doors have bottle holders.

There’s slide-in loading to the flat-floored cargo area, and cargo tie-down loops and a power point are provided, too. Under the floor, there’s a space to stow the optional retractable cargo cover when not in use. Rear space is somewhat limited but gets quite a bit better with the 60/40 rear seats folded. They drop nearly flat, with a smooth transition between the cargo floor and seat backs. Sport and Limited models come with a hands-free liftgate that will open if you stand near it with the key in your possession.

One thing that hasn’t changed about the Tucson is its easy-driving nature. With its compact dimensions and responsive steering, it is a pleasant handler. Ride is well composed over all but seriously distressed pavement, even with the 19-inch tire/wheel package standard on the Sport and Limited. Hyundai’s AWD system automatically transfers engine torque to the rear wheels and applies braking force to the inside rear wheel in cornering. It also includes a driver-selectable differential lock that creates an even split of available torque for better off-road traction.

Both of CG’s Tucsons tacked on the $2750 Ultimate Package with a panoramic power sunroof, lane-departure warning, rear parking sensors, ventilated front seats, heated rear seats, and more. Carpeted floor mats and the cargo cover were added, too, so the tested Tucsons were squarely into the mid $30,000s with delivery. However, with starting prices as low as $22,700 for a front-drive SE, prospective Tucson buyers have a lot of room to find the right one at the right price. 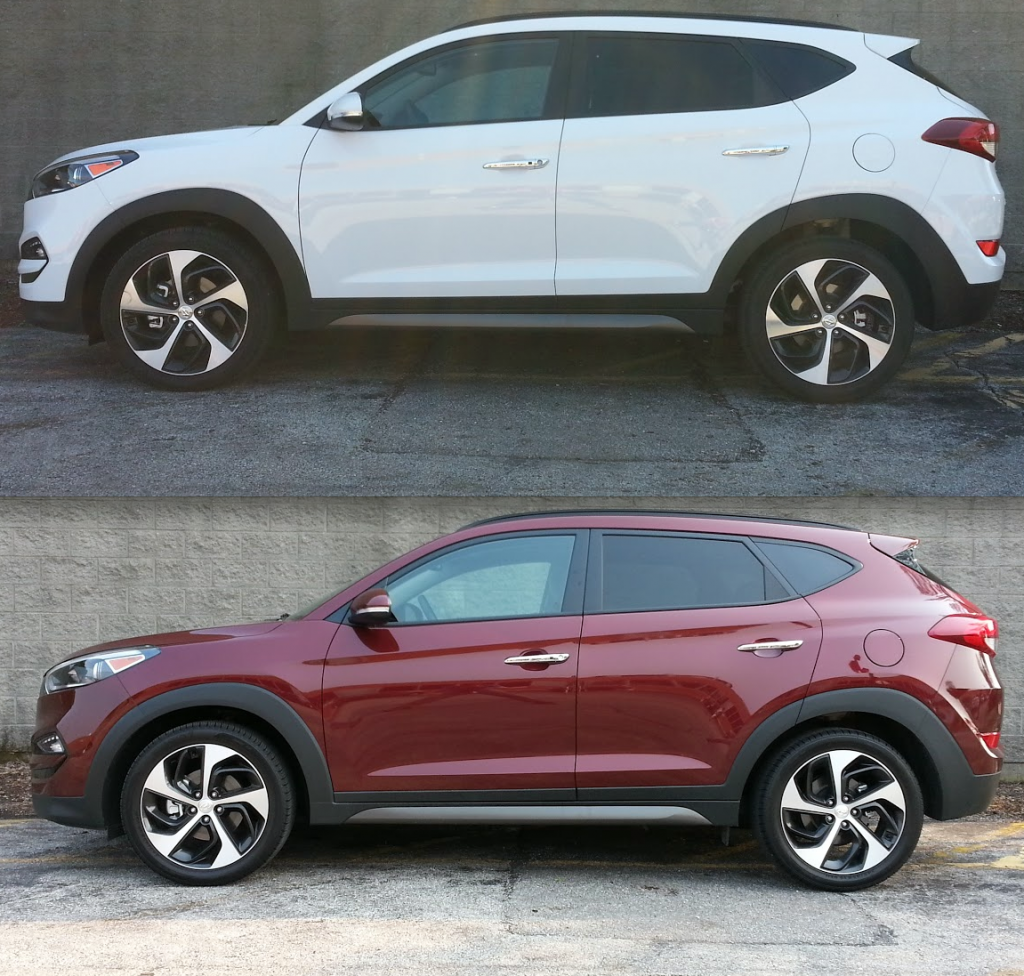