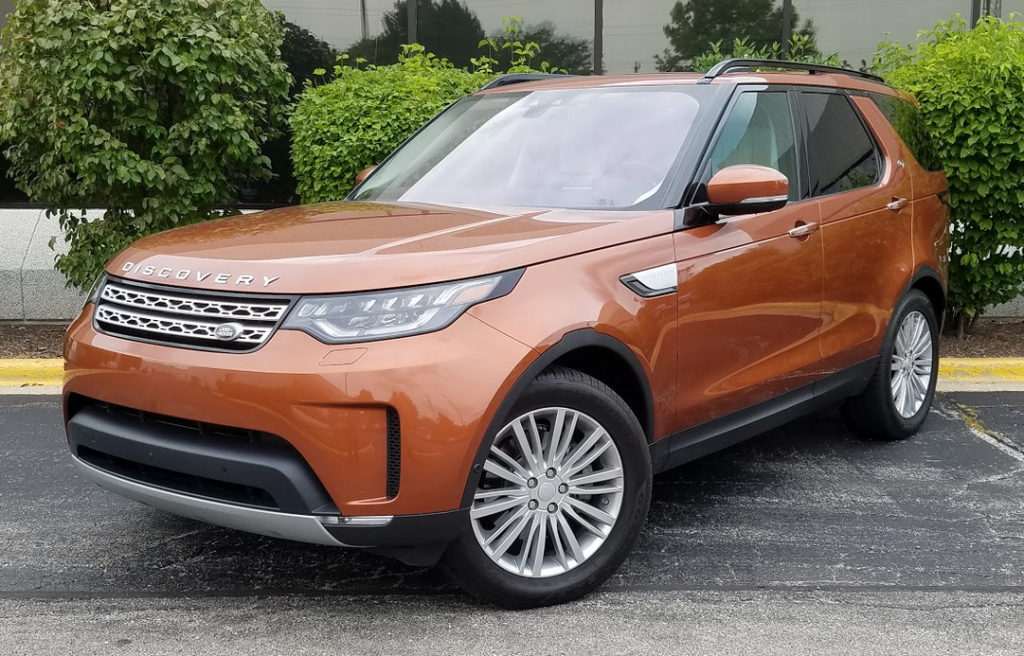 The not so good: Very pricey in optioned-up HSE Luxury trim

Offered in midlevel HSE and top-line HSE Luxury models, the 3.0-liter turbocharged V6 that was under the hood of the Luxury tested by Consumer Guide® is rated at 254 horsepower. It would be a pretty quiet engine if it were a gas engine, so it’s a revelation as a diesel. You have to listen very closely for a passing moment of diesel clatter. Its quickly peaking 443 lb-ft of torque is more than 100 lb-ft. greater than the Discovery 3.0-liter gas V6 makes, so it is eager to go from a stop—though according to Land Rover the higher-horsepower gas engine delivers faster 0-60-mph performance. Combined with a fine 8-speed automatic transmission, the highly likable diesel powerteam lets the Discovery cruise with stiff-upper-lip consistency (it is British after all), but will turn it on to pass without dithering. 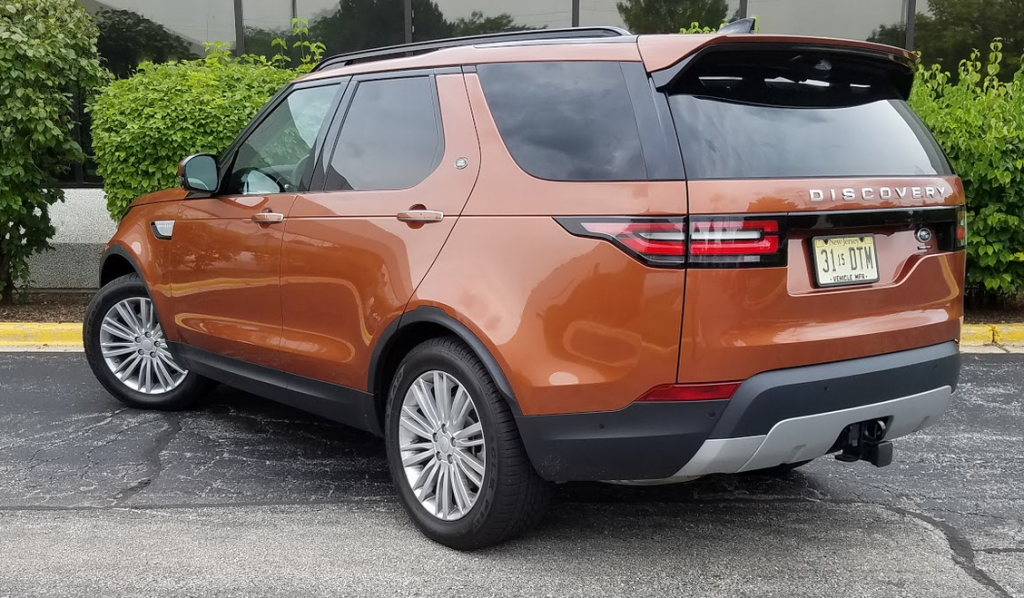 The Land Rover Discovery is handsomely styled, with interesting details such as the asymmetrical design of the liftgate’s license-plate pocket. The tall body and roofline make for an airy feel and excellent headroom inside.

In a test drive of 181 miles, with 40 percent city-style operation, this reviewer averaged 23.4 mpg. That closely matches up with the EPA estimates of 21 mpg in the city, 26 mpg on the highway, and 23 mpg combined.

The Discovery replaces the LR4 in the Land Rover’s product mix. Where the LR4 used body-on-frame construction, the Discovery employs aluminum-intensive unibody construction for a savings of up to 1000 pounds of weight. (Note that a Discovery with the diesel weighs 81 pounds more than its gas counterpart.) Depending on the model, it comes with a third-row seat with room for up to seven passengers—this was standard on the tested HSE Luxury—and the new vehicle features a conventional one-piece liftgate in place of Land Rover’s traditional two-piece tailgate. All-wheel drive and adjustable Terrain Response are standard on the base SE, but HSE and Luxury models come with a two-speed transfer case with low-range gearing and locking center differential, which turns them into true four-wheel-drive vehicles. Plus, the Terrain Response system in these upper-level Discoverys has an added “Rock Crawl” mode for enhanced off-road capability.

In top-line HSE Luxury trim, the Discovery’s cabin is impeccably finished. The front- and second-row seats are comfortable for adults; the third-row seats are a bit cramped for grown-ups, but are still class-competitive.

The HSE Luxury is the top-line model, and our tester was outfitted with most of the optional equipment that Land Rover has to offer on the Discovery. Off-road features include height-adjustable air suspension, All-Terrain Progress Control, and hill-descent control. Safety and driver-assistance technologies run to autonomous emergency braking, pedestrian detection, lane-departure warning and mitigation, blind-spot alert, 360-degree parking assist, adaptive cruise control, traffic-sign recognition, and driver-condition monitor.

A dual-pane panoramic sunroof is standard on the HSE Luxury; the dual-screen rear entertainment system adds $2270.

The quiet and luxurious cabin is dressed in supple Windsor leather. Nearly anywhere you grip something or rest an arm, it is on a soft-touch surface, and some of what isn’t soft is attractive wood accent trim. The speedometer and tachometer dials are easy enough to read, but tired old eyes (not saying who could have them) might have some trouble with type sizes on the vehicle-information readout fitted between main dials. Audio, navigation, and other infotainment features are governed by a fairly intuitive and not-especially-difficult Jaguar/Land Rover touchscreen. (It was the larger “InControl Touch Pro” version in the test vehicle.) Separate climate controls have convenient dials to set temperature and fan speed, with a few non-repetitive buttons for function control.

Second-row passengers have their own climate controls and device inputs.

Front-row occupants ensconced on plush and comfortable seats enjoy lots of room. The 40/20/40-split second row legitimately seats three adults—the middle position isn’t particularly hard to sit on and the floor beneath it is nearly flat. The third row takes some work to get at, and is a somewhat cramped place to be when you get there—though this tester has seen worse in 3-row SUVs. Headroom in back isn’t as generous as it is in the front and middle, where even tall folks will have space. Seat-folding permutations are configured via power buttons. (Land Rover calls this “Intelligent Seat Fold,” which can also be managed from the touchscreen or by using InControl Remote smartphone app.) The operation can be slow, and manipulating the seat controls in the right order to achieve as desired configuration is a drill owners will have to learn. A nice touch is that when the command is given to fold a particular seat, the seat in front of it will automatically adjust to make room for the headrest of the folded seat to clear.

In place of the Land Rover LR4’s liftgate/”mini-tailgate” arrangement, the Discovery uses a conventional one-piece liftgate and an interior cargo-floor panel that powers up or down–somewhat slowly–at the touch of a button. Not all of our testers liked this configuration, since the panel partially blocks the cargo area when it’s up and necessitates a longer reach into the cargo area when it is powered down.

Personal storage is handled by the glove box, a deep console box with integral tray, an open bin at the front of console, upper and lower pull-out pouches on the backs of the front seats, and door pockets. Two covered cup holders in the console serve front passengers. Two more reside in the pull-down center armrest in the middle row, and cup holders are molded into the sides of the third-row area.

Cargo space is just nine cubic feet with all three rows of seats up, but huge with the seats in rows two and three folded. One of the beauties of the old flip-down tailgate was that it made a handy seat for outdoor events. A power panel that that flips down above the bumper continues that—and, it seems, should make it little easier to slide loads onto the cargo floor without having to get all the way up against a possibly dirty bumper.

On-pavement ride can be pillowy, even rolling on the standard 20-inch alloy wheels. The Discovery steers easily—and not too sloppily—for comfortable every-day driving, and it stops nicely. Handling isn’t especially crisp. It’s not that the Discovery wallows constantly, but going around corners or running up a ramp will bring it out.

In top HSE Luxury trim—and loaded up with a nearly full complement of optional gear—CG’s test vehicle came to a sobering $80,045 delivered. That’s $2000 more than a comparable gas-engine version would cost, by the way, which seems like small change at this price point. Land Rovers are never the cheapest members of any SUV segment, but they are always capable and luxury-laden—and having a slick diesel on offer is just one more benefit.

The standard electronic air suspension allows for a broad range of adjustability in ride height; this is the “on-road” suspension setting. The new Discovery isn’t cheap–especially when decked out with options in a top-line trim level–but it delivers Land Rover’s typically excellent off-road capabilities in a luxurious, stylish package that can be outfitted with a host of tech features and an impressively smooth and quiet diesel engine.