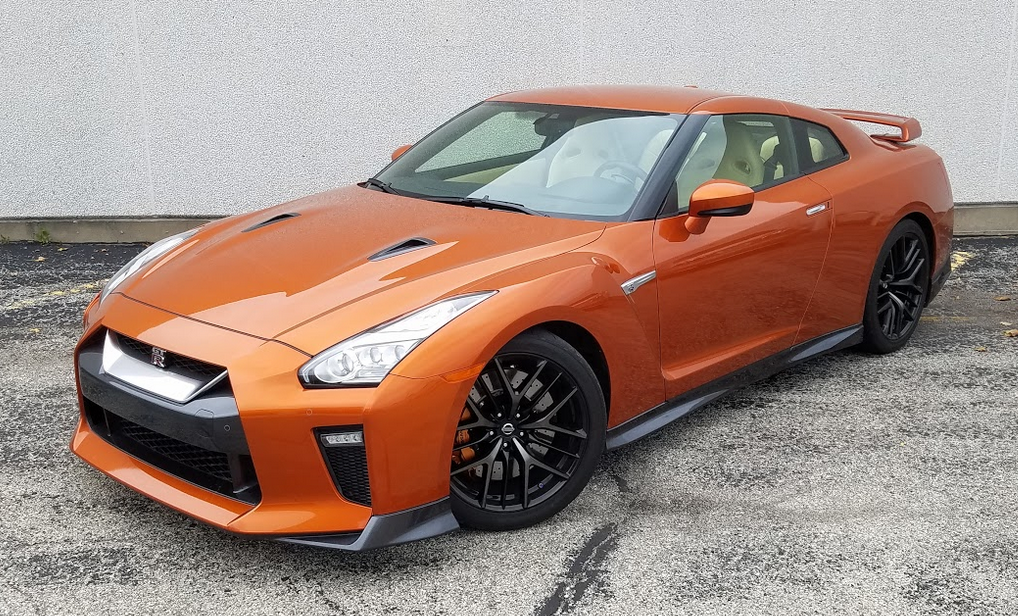 The not so good: Noise, ride quality

The roster of changes that Nissan makes to its super coupe for 2017 is relatively modest and, in some instances, limited to the cosmetic. To wit: 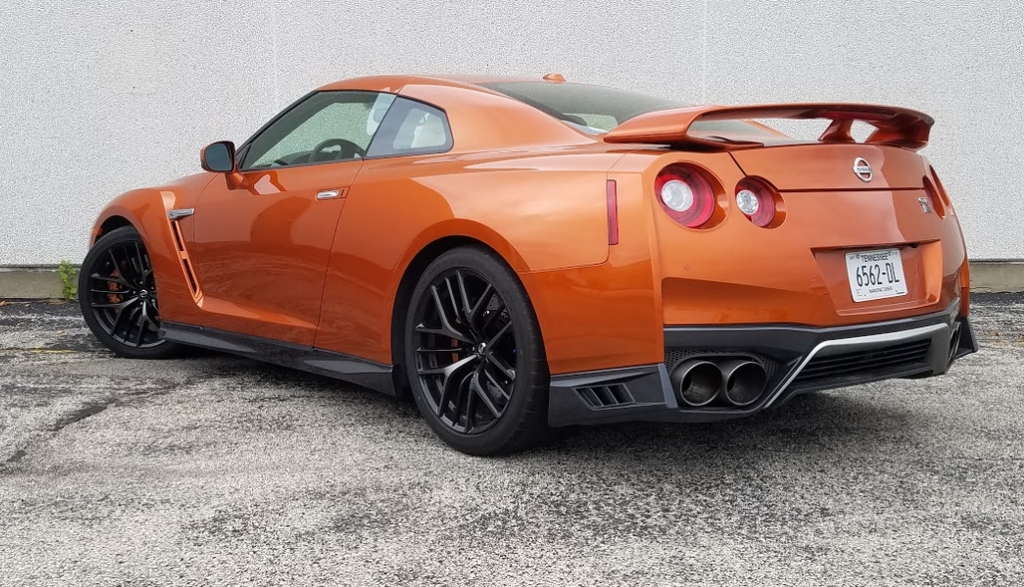 The GT-R comes only with a 6-speed dual-clutch transmission and AWD. Also standard are 20-inch alloy wheels.

Power-hungry gearheads will no doubt be drawn to the first change on that list. The 3.8-liter twin-turbocharged V6 is one heck of a device. (Each one is assembled by hand and “signed” by its builder.) Now at 565 horsepower, it’s within 35 ponies of the output claimed by the factory-tuned version found in the NISMO model. Connected to a dual-clutch 6-speed automated-manual transmission, it delivers stunning acceleration—and with no change in EPA fuel-economy ratings from its slightly less powerful 2016 forebear. Shifts via the easier-to-reach paddles are virtually instantaneous. When going fully automatic, transmission kickdown is attentively prompt but not abrupt.

Steering and braking are excellent. Ride is stiff but electronically controlled Bilstein shock absorbers make rebound from bumps quick and direct, and “cornering lean” just isn’t in this car’s vocabulary. 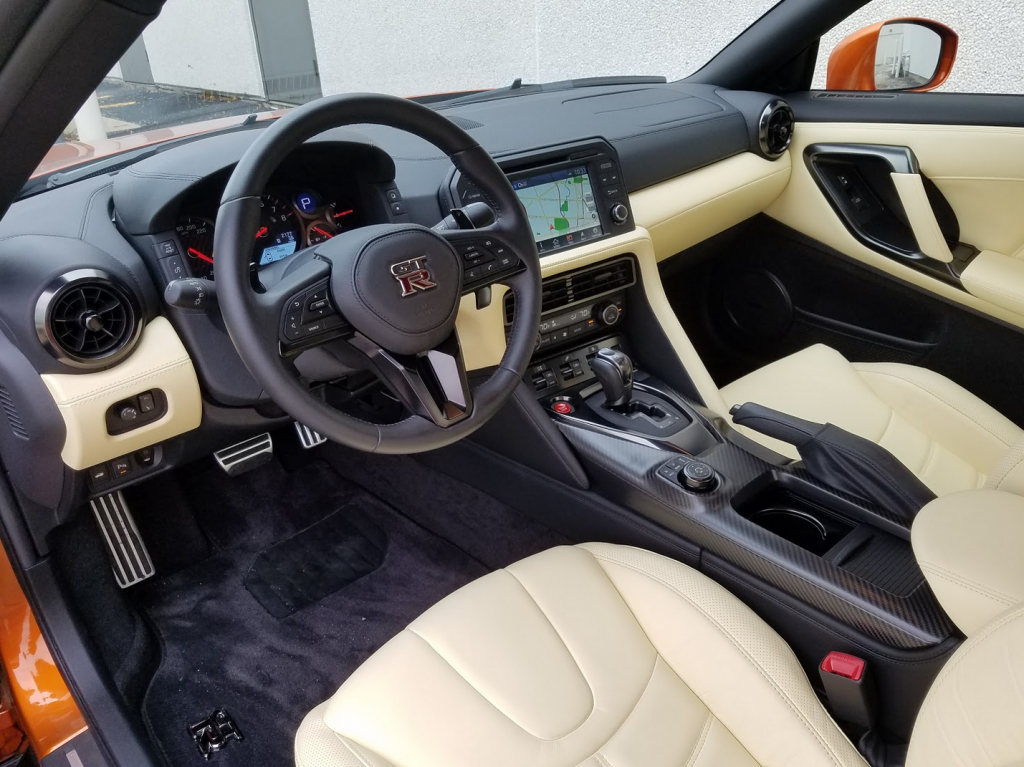 Despite a few uninspiring plastic bits hiding out among the luxury trimmings, the GT-R cabin presents well–and offers decent front-seat head- and legroom for a high-end sports car.

Ample distribution of soft-touch surfaces lends a luxury-car feel to the interior, and Consumer Guide®’s test car went even further in that direction with the $4000 Premium Interior option. The package adds a hand-stitched interior with semi-aniline leather front seats. Seats are configured to keep driver and passengers securely in place during fast cornering but the design that makes that possible may not be comfortable for all builds. Even then, though, this is no cozy grand tourer. A jam session of serious hot-car mechanical sounds is the background music to any drive, and tire noise pushes through at highway speed.

Any discussion of passenger room is really confined to the front seat because even sub-6-footers will need enough seat travel to basically evaporate rear-seat legroom. At least those front-seat denizens will enjoy acceptable leg- and headroom. Despite the low, sloping roof, there’s still pretty good over-the-shoulder vision for the driver.

Two big dials house the speedometer and tachometer, with an easy-to-read configurable driver-information readout between them. While the console controller does summon system readouts on the big central touchscreen, it’s not essential to operating it. This tester quickly arranged radio presets through the screen itself. Standard dual-zone automatic climate control has its own set of dials and buttons for easy operation.

Interior storage space is quite limited. Trunk space is not bad for a car of this size and type but it’s hardly voluminous. The hatchlike trunklid has a very high liftover, but the lid itself opens to full vertical to ease the requisite drop-in loading. Rear seats do not fold, so pack light.

Our test GT-R may be decked out with $4000 worth of premium interior upgrades, and a flashy paint color that costs $1000 extra, but those luxury trimmings can’t really hide the fact that this is a hard-edged, all-out performance machine. To truly exercise the GT-R’s capabilities, you’ll need a racetrack—which I unfortunately didn’t have for my test.

High-speed, aggressive driving is where this car feels most at home. In fact, the GT-R doesn’t seem particularly happy when it’s going slow. Thanks in part to the uncompromising tuning of the automated manual transmission and track-biased all-wheel-drive system, it takes a more-than-delicate push on the throttle pedal to get the GT-R moving from a stop. When trundling along in stop-and-go traffic, there are various clunks and thunks from the powertrain, and V6’s exhaust note often sounds more industrial than exotic. The steering system is exceptionally precise and responsive, but it doesn’t really care for rough or uneven pavement—pronounced road imperfections can sometimes tug at the wheel enough to require a bit of correction by the driver. And even with the suspension set to “comfort” mode, the ride is rather stiff and clunky on anything but smooth pavement.

Our testers had a few ergonomic quibbles as well, such as the lack of a lumbar adjustment on the driver’s seat and the awkward action of the “z-gate” shift lever. The tachometer is located front and center, but I found the speedometer rather hard to read at a glance. Given the extralegal speeds that the GT-R can achieve in the blink of an eye, this was a bit of an issue for me.

But all those quirks and peccadillos melt away pretty quickly once you dip into the GT-R’s extraordinary capabilities. The twin-turbo V6 supplies enough power for mind-bending acceleration (0-60-mph runs can be made in a touch UNDER 3 seconds), and the sophisticated all-wheel-drive system delivers heroic grip and cornering ability. All of that high-tech hardware brings with it a healthy dose of driver confidence as well.

The sight of the GT-R’s 565-hp twin-turbo 3.8-liter V6 should set most gearhead hearts aflutter. A plaque affixed to the front of each GT-R engine denotes the technician who hand-assembled it.

The GT-R is undoubtedly a ferocious super-performance car, but it has a personality all its own. It’s not as overtly brawny as a top-line Chevrolet Corvette, not as truly luxurious as a Jaguar F-TYPE, and not as polished or antiseptically precise as a Porsche 911. What makes the GT-R so special is its distinctively Japanese character. I don’t think an American, Italian, or German automaker could build a super car quite like this one. The technological and mechanical wizardry required to make a car do what the GT-R can do is never far from the surface. To some drivers that might be a turn-off, but to others it’s a key part of the GT-R’s appeal.

Not surprisingly, the GT–R doesn’t come cheap…but neither do any of those aforementioned rivals. Nissan’s “Godzilla” may have gotten a bit ritzier for 2017, but it’s still a singular machine.

At first glance, the GT-R looks deceptively like a car that one might commute in, run to Walgreens in, or drive a friend to the airport in. Don’t be fooled. The GT-R is a serious machine, a thrilling accomplice, but it’s not much of a car.

Inside and out, the GT-R is rife with unique styling details, including a new variation of Nissan’s trademark “V-Motion” grille. The RAYS-brand 20-inch forged aluminum wheels look sinister and offer a great view of the massive disc brakes.

That’s all fine, as no one with the money for the GT-R is going to confuse it with a Maxima or Pathfinder. Instead, that lucky, loaded soul is going to take the car out for weekend drives that most folks can only dream about.

The GT-R rewards drivers with visceral inputs no Chevrolet Corvette of recent vintage can match. It is raw, it is loud, and it is fun. All sorts of fun. If you’ve got the money, the garage space, and–this is important–the patience and the proper driving experience, you may want to take Godzilla for a test drive.

The GT-R’s profile and general layout are certainly dramatic, but also a bit more practical–in terms of both passenger and cargo room–that most other six-figure exotic sports cars.