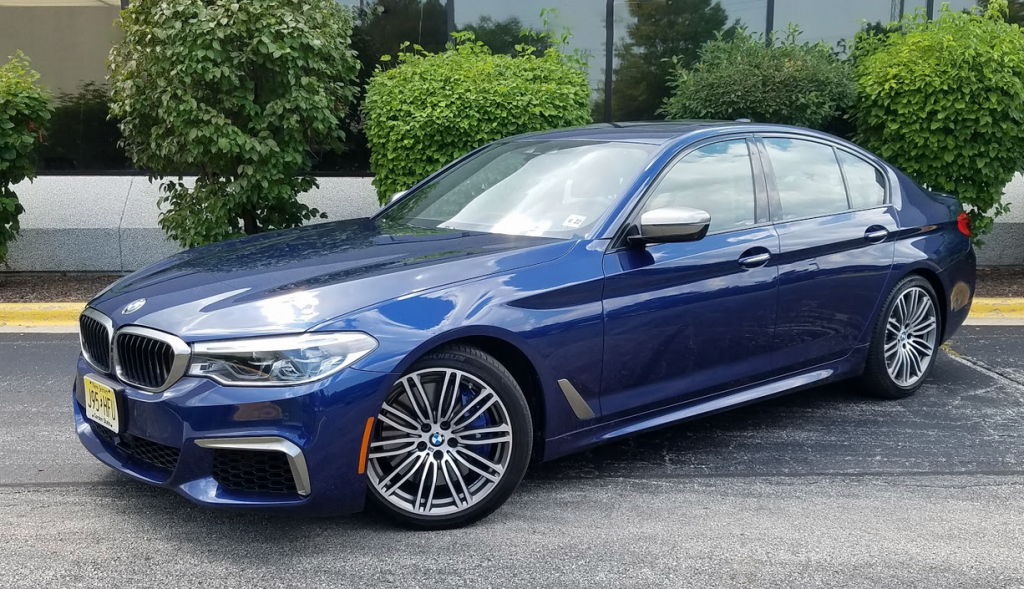 The not so good: Fuel economy, package pricing

Rome, it has been reliably reported, was not built in a day. Neither was the current BMW 5-Series. The seventh generation of the premium-midsize sedan bowed for the 2017 model year with models featuring turbocharged four- and six-cylinder powerplants. It expands for 2018 with the additions of the 530e plug-in hybrid and the V8-powered M550i. 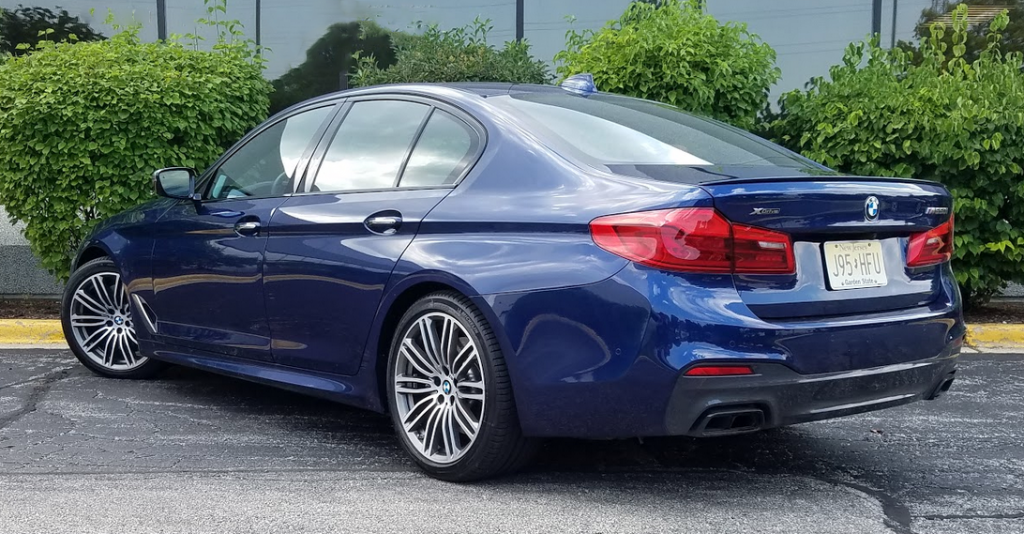 Fortified with a 456-horsepower twin-turbo 4.4-liter engine and BMW’s xDrive all-wheel drive, the M550i is now the top of the mainline 5-Series pecking order with a starting price of $72,100. Even then there’s plenty of leeway for buyers to tailor the 550 to their needs and wants: The option-laden Mediterranean Blue Metallic example that Consumer Guide® editors tried out settled at an as-delivered price of $88,985.

The M550i oozes confidence on the move with the V8 humming melodically through the standard sport exhaust system. There’s a healthy 480 lb-ft of torque on tap between 1800 and 4750 rpm, so the M550i gets its act together in a hurry—the manufacturer claims sub-4-second runs from 0 to 60 mph. The 8-speed automatic transmission (with “Sport” and “Manual” shift modes, paddle shifters on the steering wheel, and launch control) is quiet, smooth, and prompt. Topping off after 76.9 miles with the M550i—70 percent of that under city driving conditions—this driver recorded 16.4 mpg. That suggests that the EPA estimate of 16 city mpg is a realistic prediction. (Other projections are 25 mpg in highway driving and 19 mpg in combined city-highway operation.) A standard stop/start feature that shuts off the engine when the brakes are fully depressed at full stops helps out here a little.

Not all of our testers warmed to the “slap-stick” operation of the BMW 5-Series’s shifter, but most were wowed by the handsome low-gloss wood trim on the dash and console. The extra-wide infotainment-system screen was a welcome feature, as was the combination rear-view-camera/360-degree surround-view display.

As suggested by its letter prefix, the 550i has a few touches inspired by the brand’s famous “M” performance models as standard equipment. They include specific 19-inch-diameter staggered-width alloy wheels, an adaptive suspension with electronically controlled dampers, and uprated brakes. They all contribute to a rewarding feel at the controls, with crisp, responsive steering and a well-composed ride that avoids becoming brittle or harsh over bumps. The test car had some additional help from the $3600 Dynamic Handling Package that includes rear “Integral Active Steering” and lean-reducing “Active Roll Stabilization.” 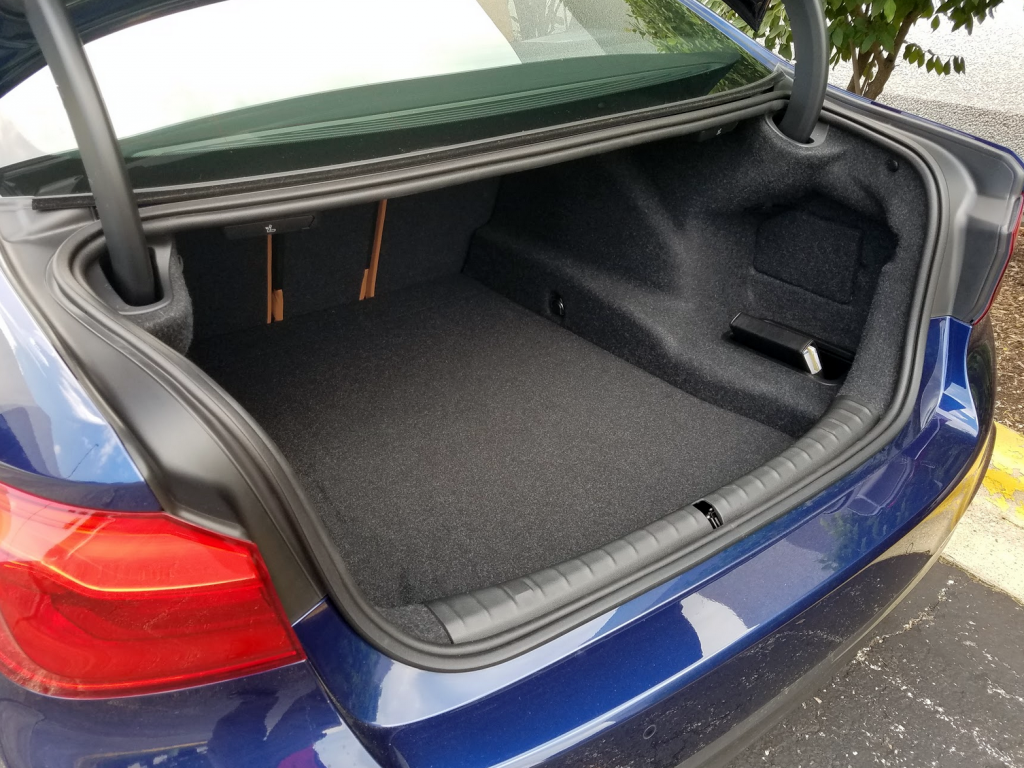 Additional performance-related standard features are a meaty leather-wrapped M sport steering wheel, a rear spoiler, and a body kit for enhanced aerodynamics. Seats are upholstered in leather, and the comfortable and highly supportive ones up front are power adjustable 20 ways. Matte-finish wood accents and pliable, soft-surfaced materials fill the cabin. A Harman Kardon surround-sound audio system with HD and satellite radio is standard, but the test car was treated to an excellent 16-speaker Bowers & Wilkins system. Navigation, a hands-free power trunklid, keyless entry and starting, ambient interior lighting, moonroof, automatically controlled high-beam headlights, automatic climate control, and BMW apps and remote services are included as well. So is iDrive 6.0, which governs navigation, audio, and other infotainment features from a central controller on the console. It puts everything at your fingertips to fiddle with, but voice commands can take up some of the attention-intensive functions ordinarily handled through iDrive.

Front passengers get plenty of stretch-out room in front. Rear legroom is pretty good as well, although an adult sitting behind a driver more than 6 feet tall might have to tuck knees and shins. Two adults will fit in back—a tall driveline hump and limited headroom see to that—but three younger folks might make it across with more comfort. Otherwise, headroom is ample and driver vision is quite good to most angles.

The fashion-forward dash design incorporates a low glove box that’s difficult to access. The console box, which has a padded split top, isn’t overly large, and it devotes some of its space to a power point and USB. Modest door pockets incorporate bottle holders. Hinged pouches are affixed to the backs of the front seats. Front cup holders rest under a door in the console; rear drink receptacles spring out of the pull-down center armrest.

Trunk space narrows between the wheelhouses, and the center section of the floor rests lower than the rest of the surface. Levers in the trunk release the 40/20/40-split rear seats, which don’t fold exactly flat and rest at a slight offset above the level of the trunk floor.

For all that’s present in this loftiest member of the 5-Series family, it’s worth noting what isn’t—unless you tick off a few expensive boxes. A heated steering wheel and seats cost extra, as do wireless device charging, a Wi-Fi hotspot, Apple CarPlay smartphone compatibility, and the kind of safety alerts and driving assists commonly found in less-celebrated makes. Owners will just have to take their solace in how the car feels on the open road.

Save for the ultra-performance, 660-hp BMW M5 (another new model for 2018), the M550i xDrive is the at the top of the the model roster for the BMW 5-Series line. You’ll pay a significant premium both at the dealership and the gas pump, but the M550i delivers breathtaking performance without compromising tractability or comfort.