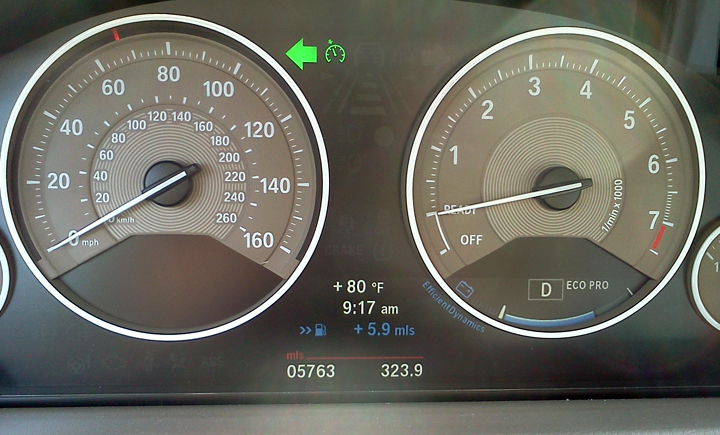 I’ve just finished my first turn in the redesigned 2012 BMW 3-Series Sedan. My test car was the 328i “Modern Line” with the new 240-horsepower 2.0-liter 4-cylinder engine and 8-speed automatic transmission.

During the first night I had the car, I discovered “ECO PRO” mode. ECO PRO modifies the engine’s throttle response, and it sets the climate control, heated mirrors, and heated seats to work in a more energy-efficient manner. The system can be customized through iDrive, and the options include setting an allowable top speed. The screen told me that the way I had the system set allowed me to capture 75 percent of the system’s potential energy savings.

The main downside of using ECO PRO is that it dulls the engine’s throttle response. To me that’s not that great of a penalty, since my driving style isn’t that aggressive. The only other place ECO PRO was obvious was on a humid morning. The car had been inside the garage all night and it was much cooler inside than the air was outside. So as soon as I exited my garage, all the windows and the outside mirrors on the colder car fogged up immediately. ECO PRO adjusts the way the heated outside mirrors work to save energy, so they took longer than expected to demist.

The frugal part of me was instantly fascinated by one of ECO PRO’s features. In the center of the instrument display, a little blue number tells you how many “bonus” miles you have earned while the car is set in ECO PRO mode. I quickly decided I needed to see how many extra miles I could collect.

Well, most of my daily commute is highway driving, and it seems the ECO PRO mode couldn’t save me much more than my normal driving style. I could drive maybe 30 highway miles and only earn 0.1 to 0.2 miles. But, in more stop-and-go driving, the savings added up much quicker.

Over three days, I drove the car 323.9 miles. I estimate that 275 miles were in ECO PRO mode, and the vast majority of that driving was on the highway. At the end of my test, the little blue number said I had gained 5.9 miles. It would have been 6.3 miles, but a spirited run up an onramp ended up costing me 0.4 miles. So on my drive, using ECO PRO probably boosted my fuel economy by about 2 percent. The company claims the improvement can be as much as 20 percent.

My final mileage in the 328i was 37.04 mpg. Originally, the 2012 328i with automatic transmission carried estimates of 24 mpg city/36 mpg highway. But the EPA validated the car at 23 city/33 highway. Either way, I ended up beating the estimates. Trip computers are notoriously fickle, but for reference the 328i had me at 36 mpg at the end of my test.

Stop It! 5 Habits to Break for Better Mileage