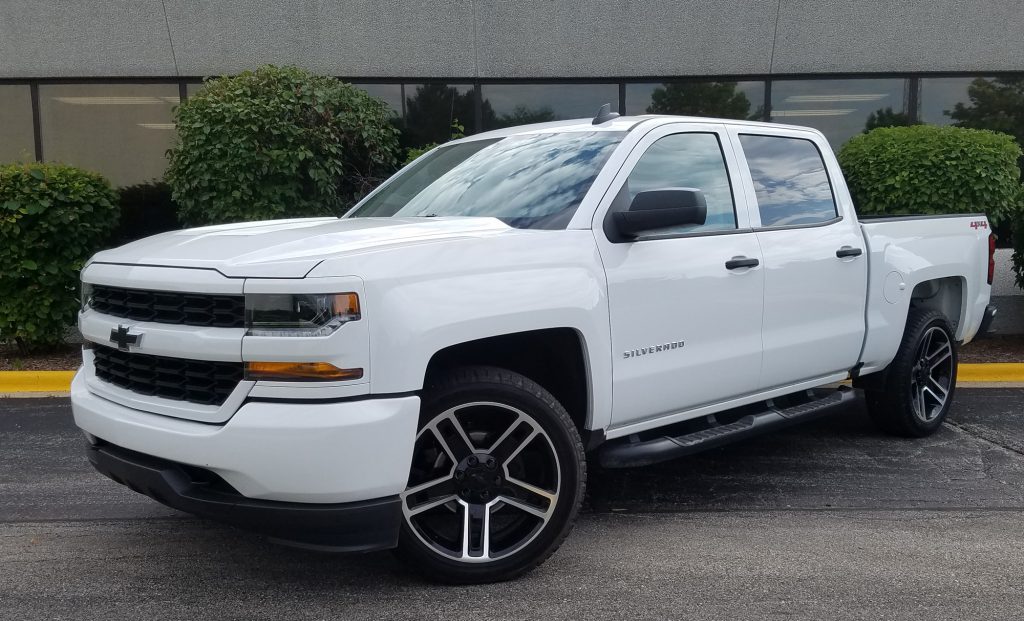 The not so good: Ride, this trim level missing some expected comfort features

Especially for those of us who still remember pickup trucks as primarily beasts of burden, it’s a little shocking when we receive test examples loaded with enough features to make a luxury car blush.

But this Silverado Custom wasn’t one of them. 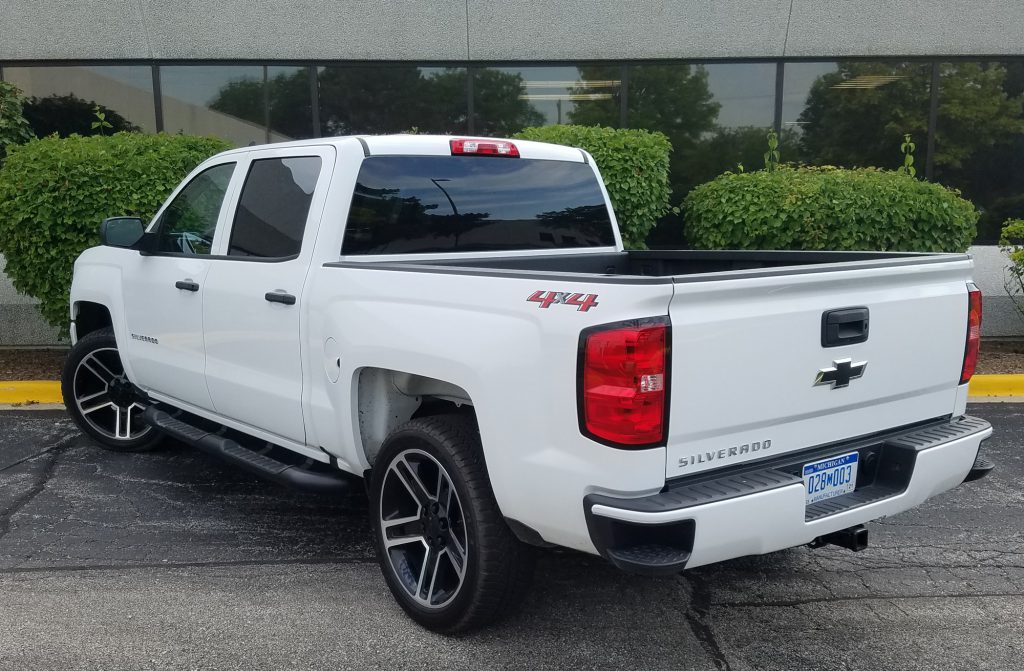 Although a fairly base-level pickup, the Custom earns its moniker with body-colored grille and bumpers along with 20-inch wheels — though not the ones you see here. Our tester was dressed up with optional 20-inch black-accented alloy wheels contained in the $3825 Black Package, which also brought a host of other features along with black trim, including a black bow-tie emblem on the grille and tailgate. Helping shorter folks handle the tall step-in were black running boards.

In many cases — particularly when it comes to pickups — lower-line models carry a certain appeal as basic vehicles focused on a singular purpose. While the Custom is actually the third rung in a eight-step Silverado lineup, it’s really not much of a jump up from the “stripper” Work model, mainly adding body-color grille/headlight surrounds/bumpers, along with 20-inch wheels vs. 17s and a few minor features … you know, “Custom” stuff. Yet there are certain creature comforts we’ve perhaps become accustomed to (some might say, “spoiled by”) that were oddly missing from the Custom.

First thing noticed was that there was no driver-seat height adjuster, and soon after, that there was no telescoping function to the tilt steering wheel. Both of these would have been appreciated, as my 5’9 frame was left feeling as though it was sitting in a bathtub. There was, however, an unexpected manual lumbar adjuster, which was put to good use.

It also quickly became apparent that little padding was sacrificed in the making of the interior. In most cases, dash padding (which this vehicle didn’t have) is more for looks than for function, so it wasn’t really missed. But there was no padding on the door tops — where one might rest an elbow — which would have been nice. There was padding on the center and door armrests, however, so there were some soft touchpoints. 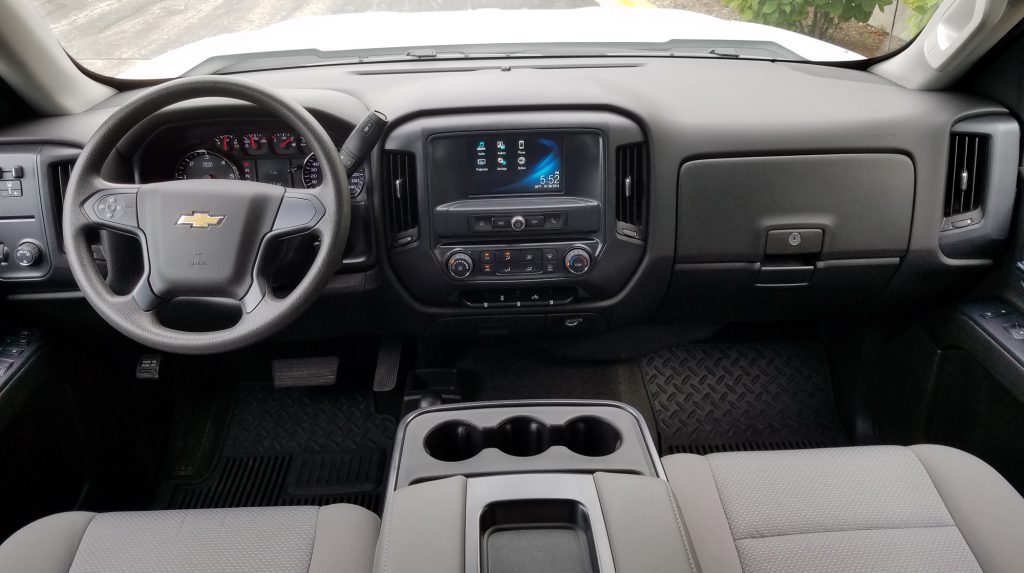 Inside, the Custom is a case of form following function, as it looks … well … “functional.” That’s fine — especially for a pickup — but we missed having an adjustable-height driver seat, telescopic steering wheel, and cushioned door tops to rest our elbows. At least cabin storage space was fine and the infotainment and climate controls easy to use, though some elements on the far right were far right.

Some other “basic” elements were appreciated. The audio system contains a volume knob and a couple of scan buttons, with all else clearly shown on the 7-inch touchscreen, the right edges of which were just a bit out of easy reach. Likewise, the climate controls consisted of rotary knobs for temperature and fan speed, with individual buttons for mode; all very easy to use. This is a point in the test vehicle’s favor, as some system have become overly complicated, largely due to trading “low-tech” physical buttons for high-tech virtual ones, which too often require multiple steps to access. Our test vehicle was equipped with the $1700 Custom Value Package, which includes satellite radio and 4G LTE WiFi, along with trailering equipment, an auto-locking rear differential, OnStar assistance system, remote keyless entry, remote locking tailgate, carpeting, and a rear-window defogger. 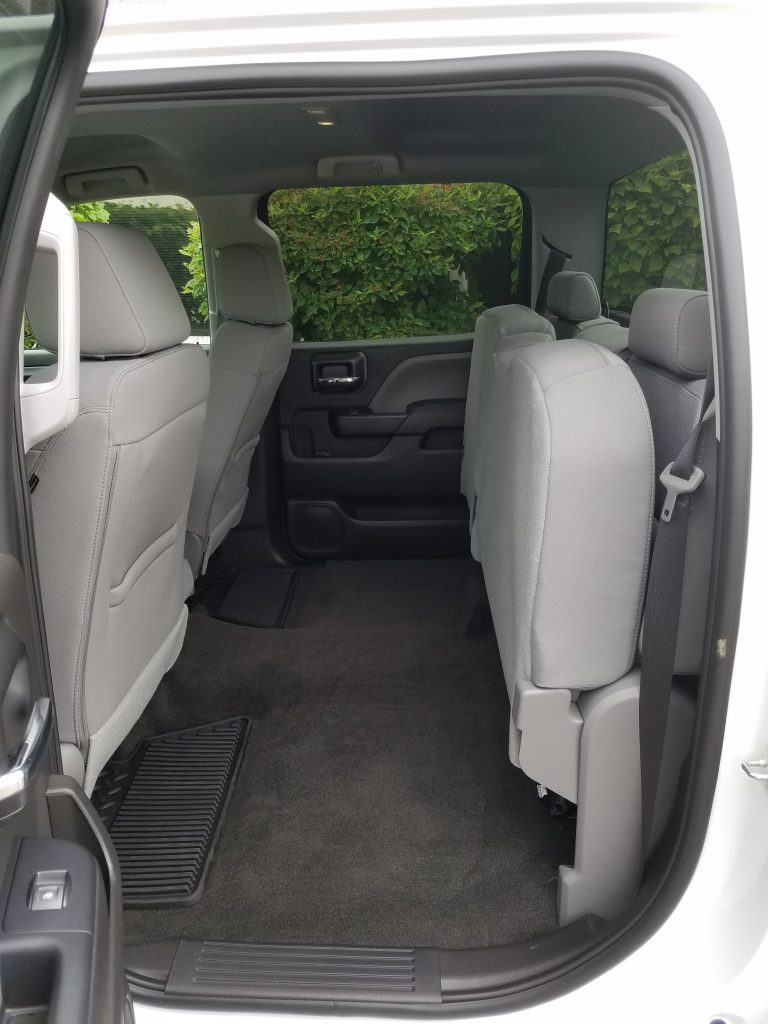 The nearly flat rear floor not only gives a center-seater more foot space, it also eases sliding long items in with the seat cushions flipped up.

Visibility is just OK to the front corners, less so to the sides due to thick pillars, but very good to the rear thanks to thin ones. There’s also a standard rearview camera that helps when backing.

Although there are numerous interior storage spaces, none but the door map pockets are particularly large. There are modest-size upper and lower gloveboxes, a flip-down center dash bin next to a 12-volt outlet, and each door includes a small mid-level bin over a huge map pocket with dual cupholders. If you flip down the center-seat backrest (our tester could seat three in front and three in back), you gain access to a moderate-size 2-tier console box with 12-volt/Aux/and two USB plugs, three cupholders, three small bins, and a cell-phone tray on top.

Both front- and rear-seat room in this crew-cab pickup are huge, the only seating challenge being a rather tall step-up into the interior, which was made easier in our tester with running-board steps. The rear seat cushions flip up to create a nearly flat-floor passageway for carrying long items. There are also steps built into the corners of the rear bumper, which are handy when having to climb into the bed, though we wish there were more tie-down hooks than the few low-mounted ones we found.

Even in 4WD Crew Cab form, the Custom comes standard with a 4.3-liter V6, but our test truck was fitted with the optional 5.3-liter V8. Although it costs $1195, that engine seems a good choice, as it helped our truck scoot from 0-60 mph in a reasonable 8.1 seconds and average 17.0 mpg in a test that included a slight majority of highway driving. Yet full-throttle off-the-line jump is moderate rather than snappy, though that might be limited by traction (and the traction-control system) in 2WD mode. Note that this 4WD is a part-time system, meaning it should not be left engaged on dry roads. 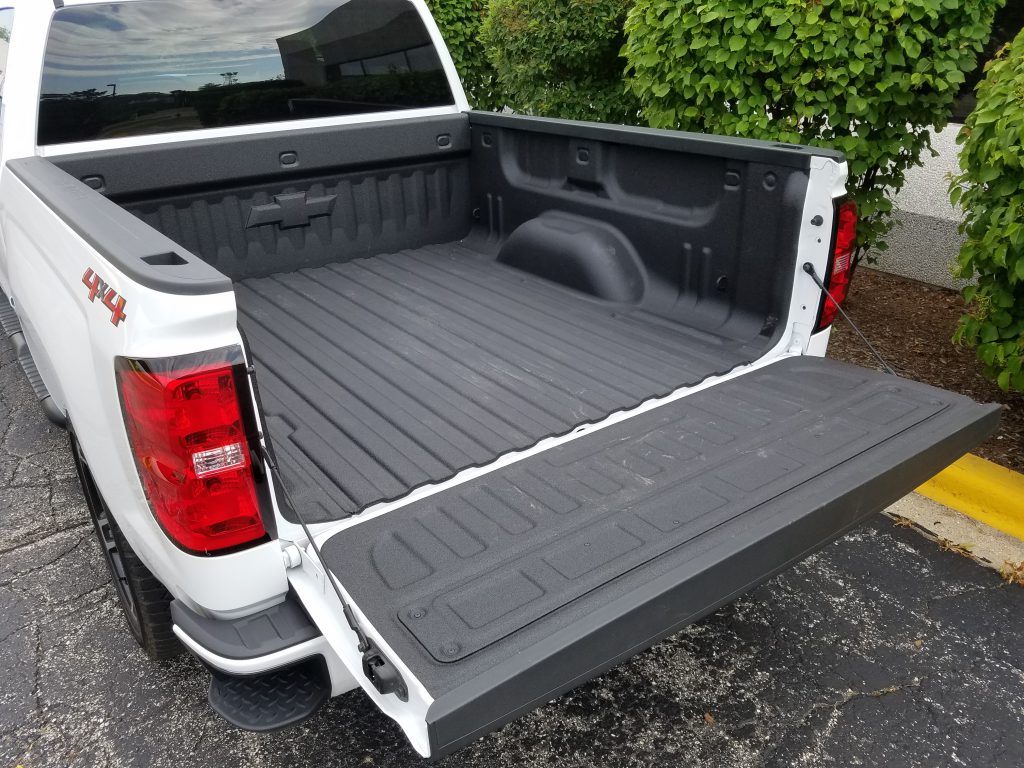 We found the corner steps in the rear bumper handy, but we missed having more tie-down hooks than the few low-mounted ones that were there.

As mentioned up top, today’s pickups can be dressed to the nines — with prices to match. Witness the 2016 GMC Sierra Denali we tested a couple of years back (the Sierra is a near-identical cousin to the Silverado, and the Denali is the top trim level) that stickered for more than $63,000, and a 2018 Ford F-150 4×4 SuperCrew Platinum driven earlier this year that bottom-lined at just under $64,000. Compared to that, the $47,435 of our test truck — though still a rather staggering figure — seems quite reasonable, and in line with recent mid-level rivals we’ve tested, such as the 2017 Nissan Titan XD, 2018 Toyota Tundra SR5 and 2017 Tundra Limited, and the redesigned-for-2019 Ram Laramie.

Speaking of redesigns, new versions of the Silverado and Sierra are slated to go on sale this fall, both as 2019 models. So if you like the 2018 version, now’s the time to buy one. But if you want the “latest and greatest,” follow the Chicago Cubs fans’ famous, nearly annual proclamation:

“Wait till next year.”

Several options (such as a 5.3 V8 engine, satellite radio, remote keyless entry, sporty-looking wheels, and black trim) pushed our test vehicle’s sticker past $47,000, but without them, the Custom 4×4 Crew Cab — with V6 engine, “plainer” 20-inch wheels, and fewer features — starts at about $41,000.