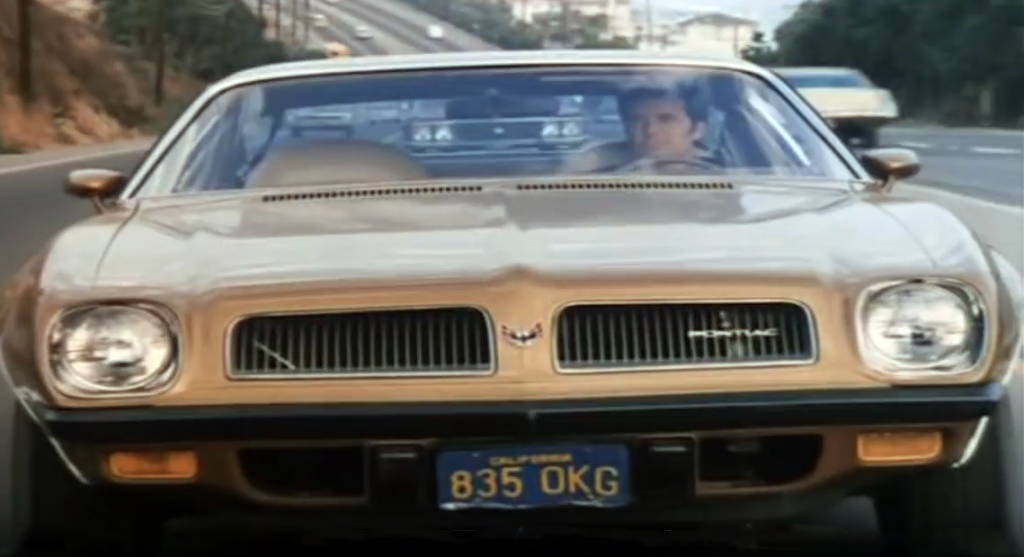 Though they were nowhere near as flashy as the typical “star car,” the no-nonsense Pontiac Firebirds that James Garner drove on The Rockford Files are among the best-loved TV/movie vehicles of all time.

Jim Rockford is the only TV detective with a driving move named for him. The late James Garner, who played Jim Rockford, didn’t invent the reverse 180-degree “J-turn,” but he used it so often in The Rockford Files television series that the maneuver is forever associated with the character. To execute a “Rockford,” Jim Rockford would drive about 35 mph in reverse, then let off the gas, turn the steering wheel sharply, and pull on the emergency brake. The car’s front end would swing around 180 degrees, and Rockford would be off—now driving forward.

It’s not surprising that James Garner would make a driving maneuver famous—he was considered one of the best drivers in Hollywood. He was trained by champion driver Bob Bondurant for the 1966 movie Grand Prix, and got hooked on racing in the process. Garner’s automotive career highlights include forming American International Racing, driving at Daytona and Sebring, racing in six Baja 1000s, and driving the Indianapolis 500 pace car three times.

Though the model years changed over the course of the show, Jim Rockford’s personal set of wheels was always a Pontiac Firebird. Seen here are a 1974 example (left), and a 1977, both in Sierra Gold.

Naturally, there were plenty of car chases in The Rockford Files. Garner said, “Car chases and car action were a big part of the series, and I did most of the driving myself. That was my fun.” When it came time to decide what Jim Rockford’s ride would be, Garner picked a Sierra Gold Pontiac Firebird Esprit. Rockford was poorly paid (if he was paid at all) by his clients, and Garner wanted to convey that somewhat cash-strapped status in his character’s choice of transportation. In his autobiography, Garner said, “Rockford’s Firebird was also a character in the show. I’ve been asked why he didn’t have a Trans Am instead. Well he would’ve liked one—it’s much sexier—but I didn’t think he could afford it. The Firebird was more of a blue-collar car, a stripped-down version of the Trans Am, with a sticker price of about $3000 for the 1970 model. And I thought it handled better than the Trans Am.”

Automotive performance was in steep decline when The Rockford Files started filming in 1974, but the Pontiac Firebird, with its available big V8s, reasonable size, and relatively nimble handling, was a bright spot in a dark age. Garner did well in choosing the Firebird.

What Would Rockford Drive?

Jim was given to borrowing the vehicles of his friends and loved ones. Two such vehicles were his lawyer’s Porsche 914 (left) and father’s accessorized GMC pickup.

To look the part of an Esprit, a Formula would have its rear spoiler removed and its scooped hood replaced with a plain Esprit hood. The show bought three Firebirds each season. James Garner didn’t like the styling of the 1979 Firebird, so ’78s were used until the show ended its run in 1980.

Rockford’s license plate—853 OKG—was the work of Meta Rosenberg, James Garner’s agent and executive producer of The Rockford Files. OKG stood for Oklahoma Garner, and 853 represents August 1953, when James Garner landed his first acting job. (If you’re REALLY into trivia, look closely at the lead photo of this article and note that the 5 and the 3 on the license plate got mixed up at least once.)

Other cars in The Rockford Files included a 1975 GMC K-1500 pickup with Vic Hickey accessories driven by Rockford’s father Rocky (played by Noah Beery). Rockford’s lawyer and sometimes girlfriend Beth Davenport (played by Gretchen Corbett) drove a 1975 Porsche 914 in the first season. For seasons 2-4, she switched to a 1974 Mercedes-Benz 450SL.

Tom Selleck played Lance White—a detective far more successful than Rockford. As a sign of his success, White drove a 1973 Cadillac Eldorado convertible. Of Garner, Selleck said, “every actor should take star lessons from James Garner.” Selleck believed that Garner’s down-to-earth demeanor affected the atmosphere of the Rockford set, and he tried to follow Garner’s example when he starred in Magnum, P.I.—where Selleck would drive a Ferrari 308.

The automotive star of The Rockford Files was always Jim’s Firebird; it was believable whether Rockford was outrunning villains or taking a leggy guest star to dinner. Almost a million Pontiac Firebirds were sold while The Rockford Files was on the air…and I’d like to think that Jim Rockford and his gold Firebird had something to with that.