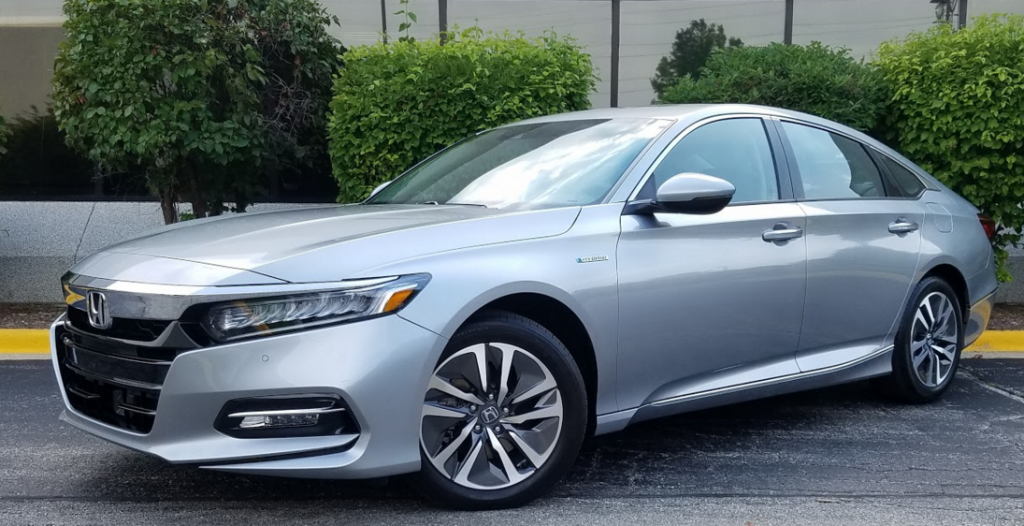 The not so good: Oversensitive object-detection sensors occasionally give false warnings

A hybrid is supposed to combine the benefits of gas and electric power to achieve superior fuel economy. And the 2018 Accord Hybrid does just that. But it also does something equally – and rather unexpectedly – impressive: This thing flat-out hauls. 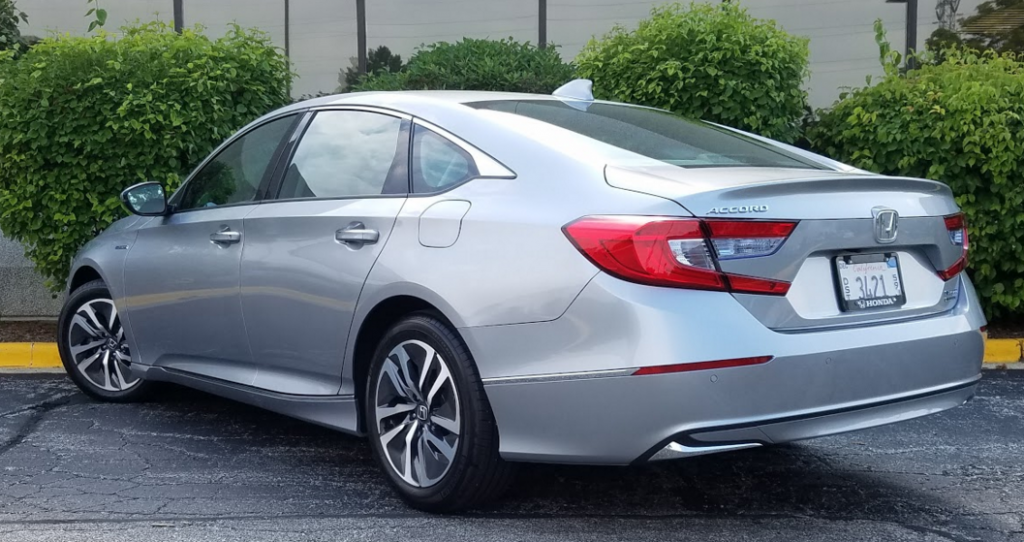 Excellent visibility is a Honda Accord trademark, aided when backing by a 180-degree rearview camera. 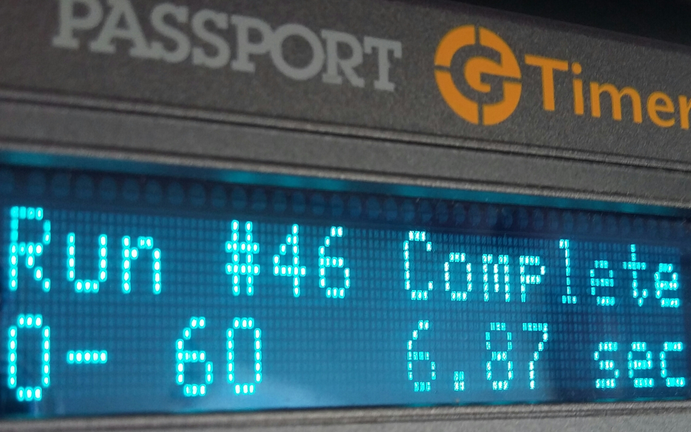 Quick for a midsize sedan, the Hybrid Touring’s impressive 0-60 time is augmented by exceptional throttle response at all speeds.

Let’s skip over that rather phenomenal fuel-economy figure and look at the “sprint” number. While certainly quick – for almost any midsize sedan – it doesn’t tell the whole story. Because one of the most satisfying dynamic elements of the Accord Hybrid is that stabbing the throttle from a stop results in a snappy jump off the line, and hitting it while underway brings almost instant – and quite strong – response. In the latter case, it’s even better in Sport mode, though that has to be reset every time the car is started.

Perhaps it would be helpful to put those figures into perspective. Earlier this year we tested an Accord with the base 1.5-liter turbocharged engine and averaged 30.8 mpg in about 40 percent city driving. Similar driving returned 25.8 mpg in a 2.0-liter turbocharged Accord. A test 2018 Hyundai Sonata with the performance-oriented 2.0-liter turbocharged engine averaged a very slightly quicker 6.6 seconds to 60, but returned “just” 25.4 mpg in 45 percent city driving, barely more than half what our Accord Hybrid averaged over the full length of our 590-mile test. Which perhaps explains why we’re so impressed. 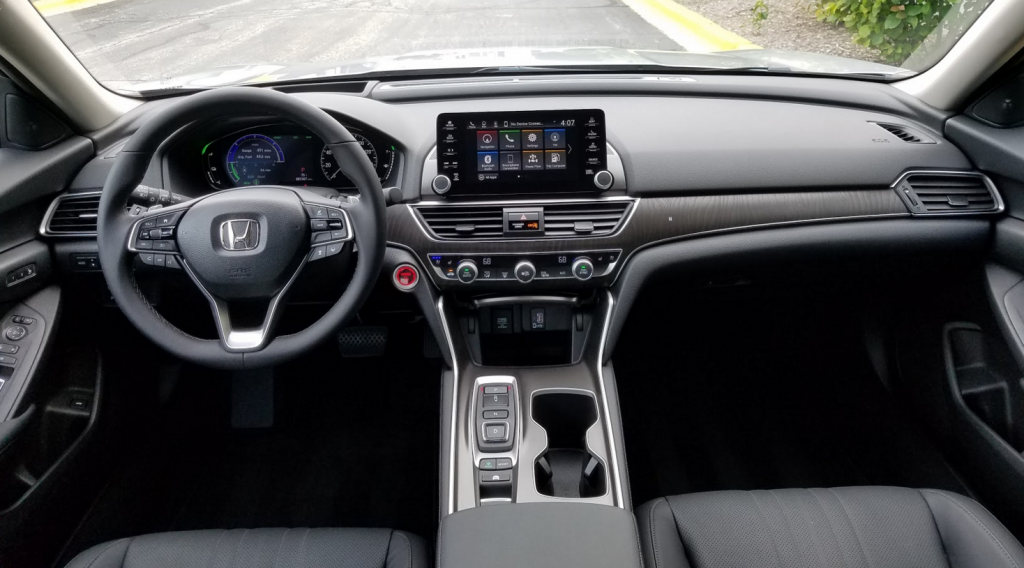 A clean dashboard design is shared with other Accords, though some instrument-panel graphics are distinct to the Hybrid. The audio system includes volume and tuning knobs, and most controls are within easy reach. 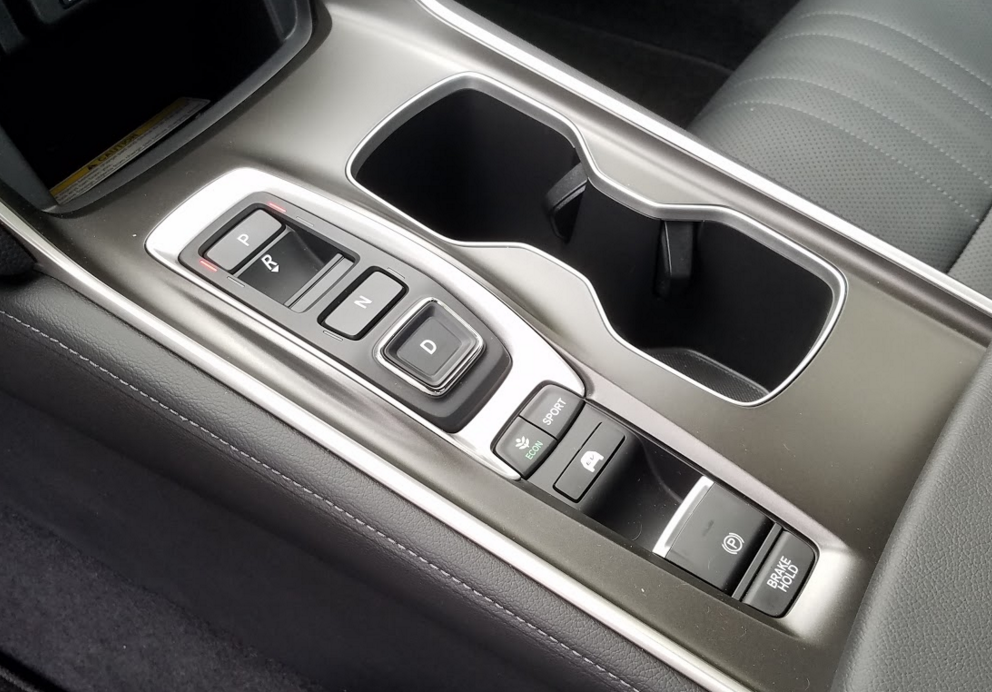 Shared with the Accord 2.0T is a pushbutton gear selector that takes some getting used to. In the middle is the Sport-mode button, which quickens the already-quick throttle response, but you have to hit it every time you start the car to activate.

As our other reports — including a full overview of the redesigned 2018 Honda Accord — get into more detail, we’ll concentrate on the Hybrid version here. But in brief, what it shares with its gas-powered siblings are terrific visibility, the benefits of a 180-degree wide-angle rearview camera (great for seeing both ways down a parking-lot aisle when backing out of a space), generous passenger room, nicely trimmed interior, good cabin storage space, a fine control layout (though some far-right elements are a stretch), and a host of available features including a full complement of high-tech safety items and our tester’s excellent large head-up display. And speaking of high-tech safety features, the Accord Hybrid includes individual buttons that allow you to turn off lane-keep assist (which can be annoying) while maintaining lane-departure warning (which can be lifesaving).

One area where hybrid versions of regular sedans typically differed from their gas counterparts was in trunk capacity and versatility. Not so much in the Accord Hybrid, though there remain some negatives.

Unlike in some previous hybrid sedans, the Accord Hybrid’s trunk (left) is the same size as that of the gas models’ (1.5T shown at right), and includes fold-down rear seat backs (which most earlier hybrid sedans didn’t), along with some underfloor storage.

Like the other Accords, sickle-shaped trunklid hinges dip into the load area, there’s still about a 3-inch step when the rear seat backs are folded (making it difficult to slide long items forward), and the opening revealed after doing so remains a bit restricted. But in most past hybrid sedans, you either couldn’t fold the rear seat back at all (due to the battery being placed against the back wall of the trunk, which also ate up some space), or you could only open up a shoebox-size passage. So this is certainly an improvement.

The Hybrid’s badging is subtle (the one at right being on the front fender), but the Hybrid’s effect isn’t, providing a great combination of power and fuel economy.

As others on staff were equally impressed with the Hybrid, what it comes down to is that this may well be our favorite version of the already-likable (and CG Best Buy winning) Accord. It’s one hybrid choice that doesn’t make you sacrifice the “go” to be “green.”

Priced between the lower-line 1.5T and top-line 2.0T Accords, the Hybrid strikes us as “just right.”

More Honda Accord news and reviews