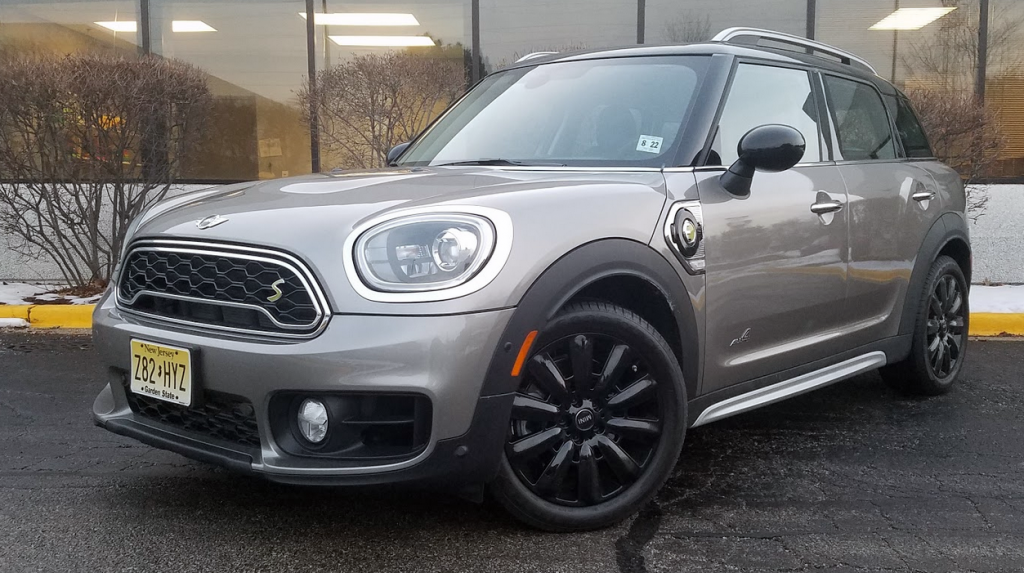 The good: Better rear-seat space than most subcompact crossovers

The not so good: Gives up cargo space and rear-seat flexibility to non-hybrid Countryman models

Subcompact crossover SUVs are all around these days, but among them, the Mini Cooper S E Countryman is in a class by itself. It is the only hybrid-powerplant vehicle in this extensive market segment.

The plug-in hybrid’s bid for exclusivity doesn’t stop there. With 221 total system horsepower, it is one of just two vehicles in the class with more than 190 horses under the hood, and at $36,800 to start, it is the second-costliest entry in the field. The only thing more potent and pricier is another Countryman, the performance-oriented John Cooper Works model. 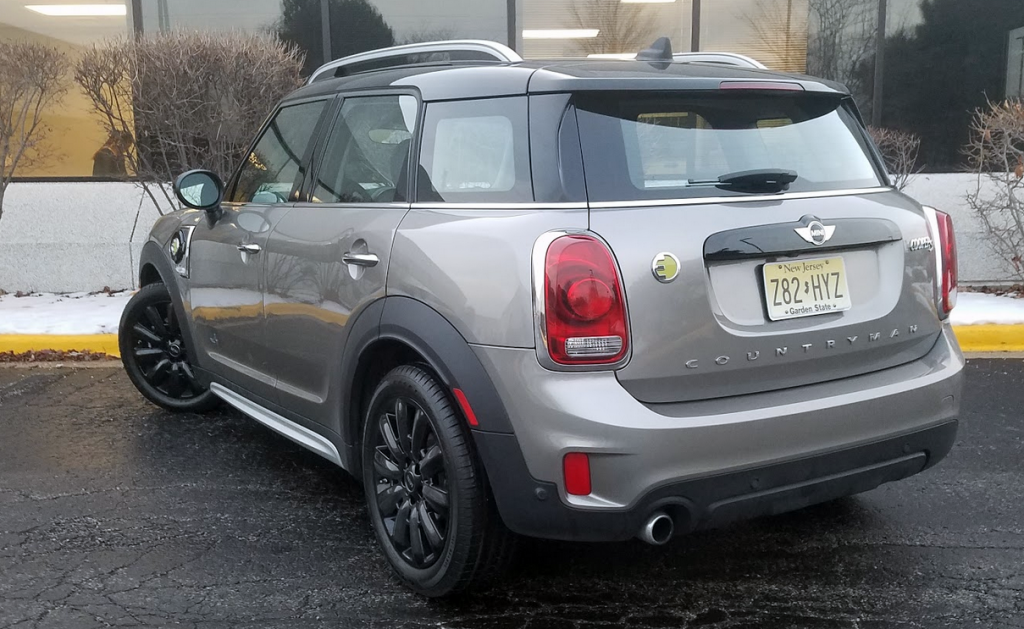 Apart from the charge port on the front left fender and the “E” badge on the hatch, the Hybrid version of the Countryman looks much like other models in the lineup.

As noted, the E Countryman’s major distinction is its mixed powertrain. A turbocharged 1.5-liter 3-cylinder gas engine—picked up from the base Countryman—delivers 134 horsepower. The rest comes from an electric motor fed by a 7.6-kWh lithium-ion battery pack. With both power sources working in tandem, the E twists out the most torque of any Countryman model: 284 lb-ft. The standard transmission is a 6-speed automatic—again shared with the entry-level gas-engine job, where it is an option.

When operating solely as an electric vehicle, the rear wheels drive it. When the gas engine is shouldering the load, it powers the front wheels. All four wheels are in play when the twin power sources are working simultaneously. The E Countryman can be set to run just on electric power, which will last a projected 12 miles. A battery-saver mode, useful for longer drives between charges, uses power from the gas engine to partially recharge the battery, keeping it at 90-percent charged so that there’s sufficient juice to reengage electric mode at the other end of the trip.

Not actually so “mini,” the Countryman offers plenty of front-row head and legroom, and near best-in-class second-row space.

This driver put around 134 hybrid-mode miles on the E Countryman tested by Consumer Guide®, starting off twice with full battery charges. In mixed cold-weather commuting after dark, with bursts of charge-burning open-expressway running interspersed with stop-and-go puttering that helped to revitalize the battery during braking and coasting, it took around 20 miles before the battery ran down to the point that the gas engine was working almost fulltime. The transition is pretty seamless, but the gas engine is a little gruff sounding. 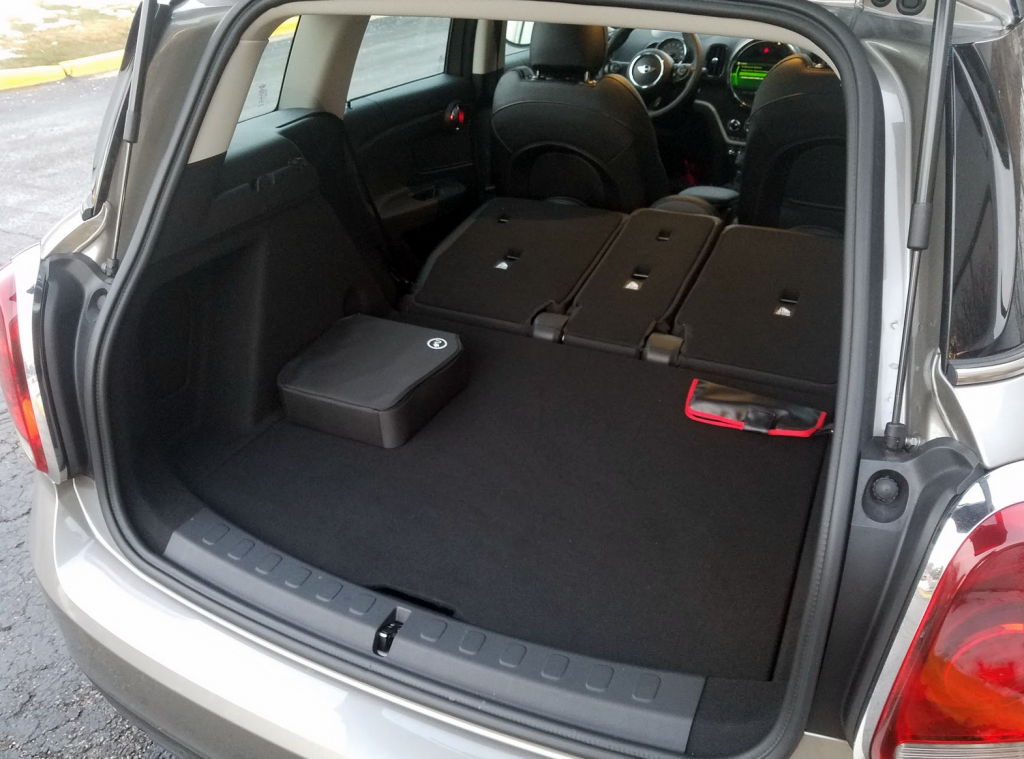 To accommodate the hybrid battery, the plug-in Countryman gives up the underfloor cargo space found in non-hybrid examples. The cargo area is otherwise usefully shaped, and the low floor eases the loading of larger and heavier items.

With a fully charged battery, the E will deliver a combined city/highway 65 MPGe, according to the EPA. The feds’ rating for gas-only operation is 27 mpg. With 68 percent of his test miles in city-type driving, this reviewer saw 26.8 mpg. “Filling” a fundamentally drained battery from a 240-volt level-2 charger takes about two hours. The E Countryman comes with a 120-volt charger that can be plugged into a common household outlet for a slower charge, but the cord isn’t as long as we’ve seen in some other plug-in-hybrid and full-electric vehicles, so it may not be convenient in all situations—it certainly wasn’t for this driver.

A lever at the base of the shifter boot lets drivers select “Mid,” “Sport,” or “Green” modes that modify fuel delivery and—in Sport—steering response. In general-use Mid or in Sport, the hybrid Countryman is a lively accelerator and an unperturbed highway cruiser. There’s a moment’s hesitation when the pedal is tromped from a standstill or a slow rolling start, but then acceleration comes on strong. In Green mode, the vehicle’s reflexes are dulled a little bit. Steering is direct and cornering lean is admirably controlled, but brakes have a tendency to grab abruptly.

The E hybrid was a running addition to the lineup during 2017, when the Countryman was redesigned on the core platform of the X1 SUV from corporate parent BMW. It’s fundamentally like any other Countryman, but allowances for the battery pack show up in the back half of the vehicle. Compared to a gas-only Countryman, there’s 1.4-inch less headroom above rear seats that don’t adjust fore and aft (though seat backs still recline), and fractionally reduced trunk and overall-cargo volume. Standard equipment includes 18-inch alloy wheels, rain-sensing windshield wipers, rear parking sensors, LED headlights and fog lights, roof rails, leatherette upholstery, heated front seats, a leather-wrapped steering wheel, rearview camera, keyless access and starting, dual-zone automatic climate control, AM/FM/HD radio audio system, navigation on an 8.8-inch central touchscreen, Bluetooth connectivity, Mini Connected system with app integration, and wireless smartphone charging.

Headroom is better in front than it is in back—though it’s not especially cramped in the second row. Legroom is good in either row, though we could imagine too many tall passengers putting some pressure on back-row space. Optional front sport seats provide grip for aggressive driving, but they’re firm to the point of being hard. The SUV-like stance doesn’t ask much extra effort for entries and exits, and vision is good to nearly every angle.

Rear seats split in a 40/20/40 break. They fold almost flat to extend the useful cargo-area space, albeit with a gap between the seats and rear cargo floor. Storage needs for personal items are met by a large glove box, big door pockets with bottle holders, and a pouch on the back of each front seat. An adjustable central armrest flips up to lend access to an open bin and a USB port. The armrest opens to expose the wireless charger. Two open cup holders are provided in the console but rear passengers will have to hold their drinks unless the owner sprang for an option package that adds rear cup holders.

Looking much like a super villain’s vault, the Countryman’s charge port is difficult to miss. The front-fender location works well in most charging situations.

Speedometer and tachometer dials are attached to the tilt/telescoping steering column. Mini’s typical large, round display at the center of the dash serves the audio and navigation systems, vehicle information (including hybrid-system operation), and the rearview camera. Toggle switches for the starter, traction control, etc., are arrayed horizontally on the lower portion of the instrument panel. What’s basically the BMW iDrive system with a console-mounted controller manages the various conveniences that appear on the dash screen—which (heaven knows why) means a learning curve to master the audio system—but rotating dials easily set temperature and fan speed for the climate system.

With a handful of options and delivery folded in, CG’s test vehicle came to $40,000 on the nose. With the E Countryman, it will cost you money to save gas.

Rated at just 27 mpg, non-electric driving, the Mini Cooper S E Countryman only makes sense if owners are vigilant about charging. We saw 27 real-world mpg while evaluating a non-hybrid 2017 Countryman. You can read that review here.