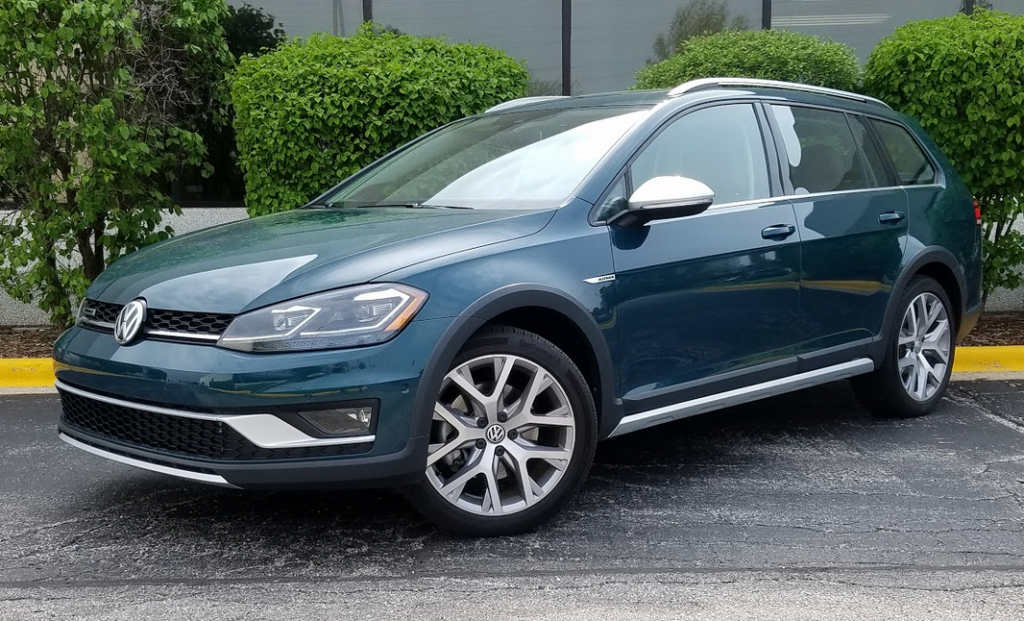 The not so good: A bit pricey in top-line form, ride quality isn’t quite as absorbent as Golf SportWagen

Volkswagen jumped into the market for SUV-like wagons at the right time when it trotted out the Golf Alltrack in 2017. Vehicles with “more-than-a-car-but-not-quite-a-sport-ute” character comprise another rising market niche for an industry that’s apparently bent on seeing the historically dominant passenger car in its rearview mirror. Now VW is trying to make the Alltrack better. 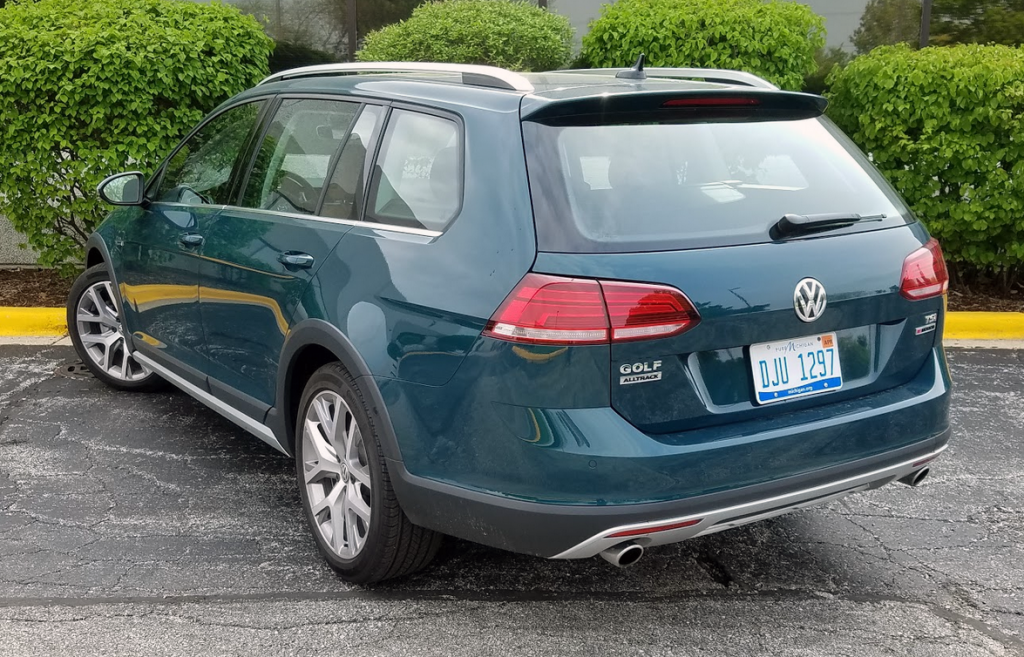 The Volkswagen Golf Alltrack is essentially a Golf SportWagen with added “SUV-esque” features such as lower-body cladding, a raised ride height, and standard AWD with hill-descent control and an off-road drive-control setting.

For 2018 there’s more standard equipment to go around in all three trim levels—S, SE, and SEL. Infotainment systems have been massaged, too. It goes without saying that none of that will get the Alltrack expelled from the Consumer Guide “Best Buy” class of 2018.

The Alltrack is the “outdoorsy” companion to the Golf SportWagen. Alltracks add standard 4MOTION all-wheel drive, “Off-Road Mode” drive-control setting (it alters traction-control behavior when off pavement), hill-descent control, 1.4 more inches of ride height, a front skid plate, and SUV-wannabe lower-body cladding. Ride is a little firmer than in the SportWagen—though still quite compliant in normal highway driving. The Alltrack handles just as well as its easy-driving, lower-riding body double.

The Alltrack offers 66.5 cubic feet of cargo space with the rear seats folded, plus a bit of small-items storage space under the load floor. Our tester was fitted with a “Muddy Buddy” rear cargo-area floormat, a dealer-installed accessory.

A 1.8-liter turbocharged 4-cylinder engine is the sole Alltrack powerplant; it’s rated at 170 horsepower and 199 lb-ft. of torque. Surprisingly smooth and quiet at idle, it endures a slight turbo lag when roused but produces nice power overall. The transmission kicks down in a timely fashion for safe passing. Selecting “Sport” mode off the touchscreen holds the transmission in gear a bit longer to help hasten the Alltrack on its way. Shifter paddles behind the steering wheel put more control in the hands of the driver. 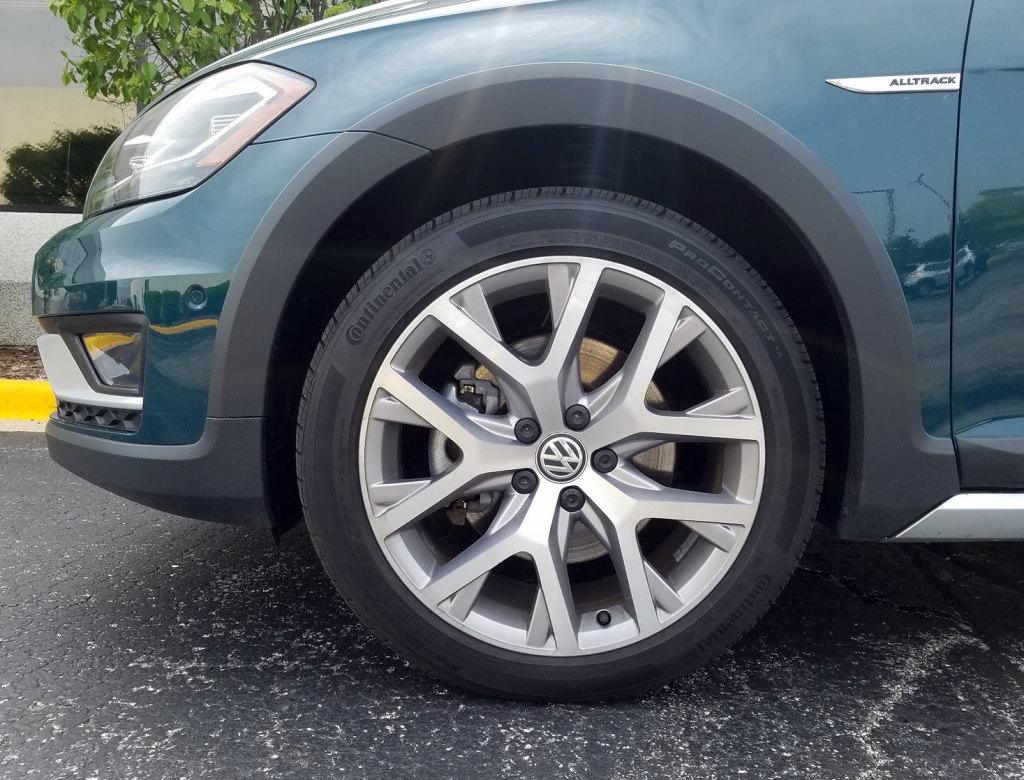 EPA fuel-economy projections for the SEL’s powerteam are 22 mpg in the city, 30 on the highway, and 25 combined. In a 201-mile test stint with 63 percent city-type driving, this driver got 23.6 mpg from the Alltrack. That was a near match to his experience with a similarly equipped 2017 Alltrack SE.

The station wagon shape that goes hand in hand with the chassis in the Alltrack’s bid to be accepted as a sport-ute provides good cargo versatility. With the rear seats down, 66.5 cubic feet of easy-loading cargo space are exposed—more than twice the volume available with the seats up. The 60/40-split seats fold almost flat (flipper levers in the cargo bay make this easy) with an uninterrupted surface from the cargo floor. A central pass-through for long objects is built into the rear seat. Open bins in the rear corners of the cargo hold contain small objects, and there’s further space present under the floor around the spare tire.

Regardless of which Alltrack a buyer selects, the interior is going to feature leatherette upholstery, heated front seats, and a leather-wrapped steering wheel and shifter knob. The test car was clad with warm Marrakesh Brown leatherette on the seats and door centers, a particularly classy look. The armrests, dash, and tops of the front doors are graced by soft surfaces with some give, however rear-door tops have grained surfaces without give. As noted previously in the list of SEL standard equipment, true interior distinction rests in the level of equipment included. Controls show up well and most are easy to use. The SEL uses the “Discover Media” layout, which is just a bit more time-consuming to use than other dead-simple VW audio set-ups, with a step or two more than seems necessary to input a radio preset.

Seats are supportive and comfortable for four adults. (A tall driveline hump rules out more than two voting-age occupants riding comfortably in the second row.) There’s a pleasing amount of legroom in front, and enough to keep average-sized adults happy in back. Headroom is good throughout, but the panoramic sunroof standard in the SE and SEL does trim that space somewhat. Rear headrests intrude on vision that’s otherwise fairly unobstructed. Doors open wide for easy ingress and egress. Cabin storage consists of flocked pockets in all four doors, a big glove box—even with the CD player (another SE/SEL standard) and SD card slot built into it, a covered bin at the front of the console with auxiliary and USB ports, pouches on the backs of the front seats, and a small cubby under the padded center armrest. There are two open cup holders in the console and two more in the pull-down center armrest.

Vehicles like the long-lived Subaru Outback and the brand-new Buick Regal TourX show that the VW Alltrack wasn’t the first of its kind, and it won’t be the last. However, in the quest to deliver the sport-ute attributes that car buyers seem to want, it’s very much the right kind.