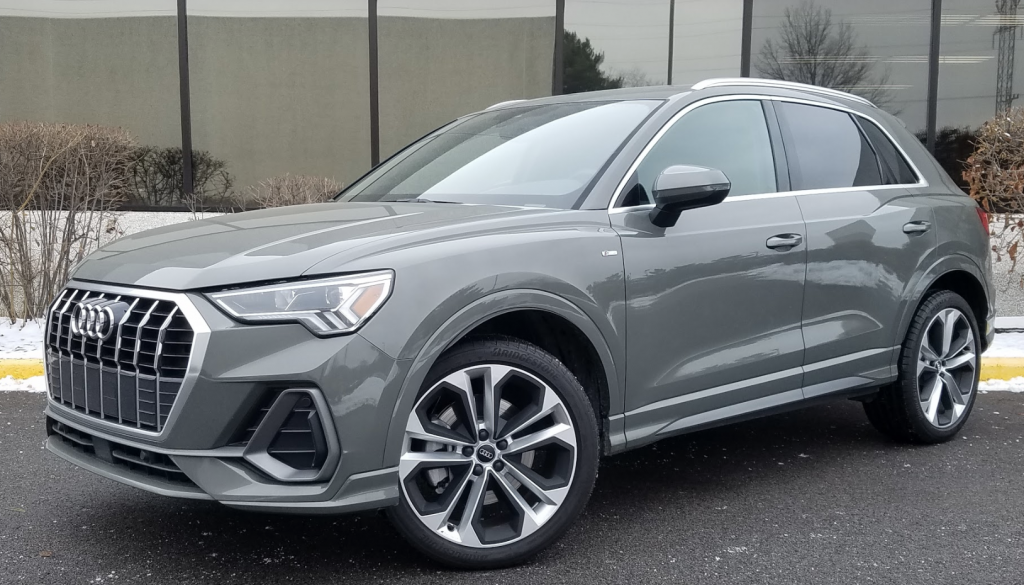 The good: Passenger space for a subcompact crossover

The not so good: Most high-tech safety features are optional, driving dynamics, control layout

In an effort to increase its share of the lucrative crossover pie, Audi is increasing the size of its premium subcompact entry.

S Line versions of the Q3 add unique front and rear bumpers along with side sills. The 20-inch wheels on our tester were part of the $800 20-inch-wheel package, which also brought summer tires.

With its 2019 redesign, the Q3 moves up a notch in size, and while it’s still considered a subcompact in our book, it’s now a bigger one.

That mostly benefits passenger space. A 3-inch wheelbase stretch gives it more interior room, particularly noticed in the rear seat. Meanwhile, being 3.8 inches longer overall adds a bit of cargo capacity, with an additional 1.5 inches in height and about one inch in width aiding both.

While the only engine offered is a 2.0-liter turbo four, its power output increases from last year’s 200 horsepower to 228, with torque rising from 207 lb-ft to 258 – both significant gains. An 8-speed automatic transmission replaces a 6-speed, and all-wheel drive is now standard. Audi says this combination results in a 0-60 time of 7 seconds flat; we averaged about 7.3 seconds in our own tests, so close. These figures put it about mid-pack for the class.

The redesign also brought a few other updates. Standard features now include an MMI touchscreen infotainment interface (more on this later), adjustable Drive Modes that include Comfort/Automatic/Dynamic/Off-Road/Individual selections, leather upholstery with heated front seats and power driver seat with 4-way lumbar adjustment, Apple CarPlay/Android Auto, panoramic sunroof, and forward collision warning. Much of this is notable, as many of these premium features aren’t commonly standard, particularly on German makes. However, some common high-tech safety features are not standard, with lane-departure warning, blind-spot alert, and rear cross traffic alert being elements in our S Line’s $3100 Premium Plus Package. Other available features include adaptive cruise control with stop-and-go capability and front- and rear-obstacle detection; newly available for 2019 are Park Assist and a 360-degree camera system.

The Q3 is offered in six trim levels. Both base and S Line models are available in Premium, Premium Plus, and Prestige versions, with the sportier S Line adding specific front and rear bumpers, side sills, and five-spoke 19-inch wheels. Prices start at $35,695 (including the $995 destination charge) for the base Premium and run up to $43,895 for an S Line Prestige. Our test vehicle was an S Line in Premium Plus form starting at $36,995, with seven options boosting the bottom line to just under $45,000.

With the size increase, interior space is very good for a subcompact crossover. There’s plenty of headroom and almost vast legroom available up front, and on our tester, both front seats had a tilt cushion and adjustable lumbar support, the driver’s being standard, the passenger’s coming courtesy of the aforementioned Premium Package – an unusual nicety at this price point. There’s good adult room in back as well, and though my 5’9 frame barely fit behind a fully rearward front seat, those seats go far back. Passengers get storage bins at the sides of the seats along with 12-volt and two USB plugs, and though a center rider will have to contend with a large driveline hump, it’s really too narrow for three across anyway. Visibility is good to the front, fair to the rear, but rather poor to the sides due to close, thick roof pillars.

Orange accents were a $150 option, but help brighten the otherwise rather drab interior. We found the new touchscreen-based MMI infotainment controls to be better than the previous console knobs, though the system’s volume knob was oddly placed in a recessed panel below and to the far right of the climate controls.

Our S Line tester was fitted with orange suede accents inside courtesy of the $150 Alcantara interior package, and though most materials matched the price (some coming in the $500 Sport interior package), there was little in the way of padding on the door tops where you’d rest your elbow. Cabin storage consists of a good-size glovebox, a small console box without any plugs inside, two cupholders separated by a slot to hold a cellphone next to a 12-volt plug, a tiny console bin, a forward bin with Qi wireless charging pad (another part of the Premium Package) next to USB/USB-C plugs, and tiny map pockets in the doors.

Audi’s current MMI multimedia interface eschews the previous console knobs for a regular touchscreen. However, there’s no tuning knob, and the on/volume knob is low and recessed far to the right, making it a very long reach away, and rather like an afterthought; thankfully, you can also use steering-wheel buttons for volume. Other actions, such as saving radio stations, were more complicated than they should be, but we still like this system better than the old console-knob setup.

Climate controls, on the other hand, are far better. All are easy to reach, rotary knobs control temperature and fan speed, and individual pushbuttons for mode allow you to select all three directions (windshield, dash, and floor vents) at once – a nice and unusual feature.

Along with handy side bins at the rear, the Q3’s cargo floor can be set at two different heights; in its raised position (right), it rests level with the folded rear seat backs, leaving a large, flat storage space underneath.

Cargo space and utility are pluses. There’s decent capacity and the area is wide at the rear, with bins and a 12-volt plug at the sides. The floor can be set at two levels, the upper one resting even with the folded rear seat backs and providing a large, flat under-floor bin. Our test vehicle had a power liftgate, with the only downside being that folding the rear seat back – either up or down – requires pulling on a low-mounted release.

Less impressive is the on-road performance. While the aforementioned acceleration times are fine and the Q3 gets a decently strong full-throttle jump off the line (not often the case with small turbocharged engines), there’s a noticeable and annoying power sag with each upshift. Also, some downshifts when hitting the throttle at speed are delayed, and one of our drivers complained of non-linear around-town throttle response.

While handling felt sporty and nimble, the ride didn’t impress. It was firm in the German tradition, but felt choppy and bouncy over pavement that wasn’t that rough. Some of that might be due to the $500 20-inch-wheel package (which also brings summer tires, a demerit in the frozen north), and this might be an acceptable tradeoff to folks who value handling over ride – or whose home turf consists of fairly smooth roads. But it was a demerit on the pockmarked streets around our Chicagoland headquarters.

Audi has a strong name in the U.S., leaning toward the sporty side of the premium segments in which it competes. But it wasn’t the sporting attributes of the Q3 that impressed us; rather, it was its practicality and value. And while strong virtues, they may not be what Audi was aiming for.

While the Q3 still looks rather stubby, it’s 3.5 inches longer than it was before, the stretch aiding both passenger and cargo space … which end up being big pluses. Less impressive was its on-road behavior, though those with a sporting intent might find it to be in keeping with Audi’s sporting image.