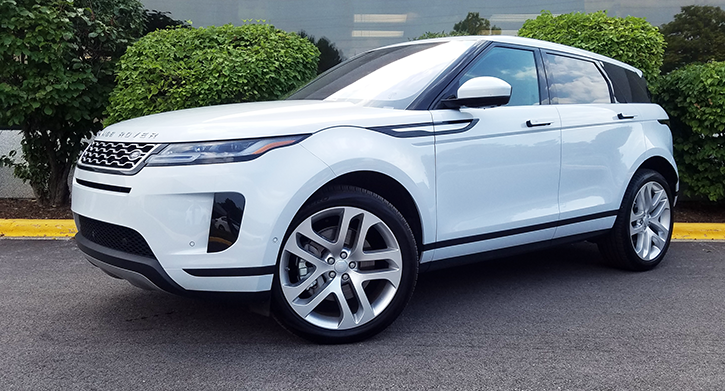 The not so good: Tight back seat; price rises significantly with options; disappointing fuel economy; intrusive stop/start and lane-keep-assist systems

Land Rover has redesigned its fashion-forward Range Rover Evoque premium subcompact SUV for 2020. There’s updated styling inside and out, and more power on tap from both versions of its 2.0-liter turbocharged 4-cylinder engine. That ought to make this pricey little bauble a little more desirable, but it has some quirks that can cool the ardor.

First, Consumer Guide editors drove an SE, which is the middle of three available trim levels. Then they grumbled. Dislikes ranged from somewhat big issues to relatively small stuff. 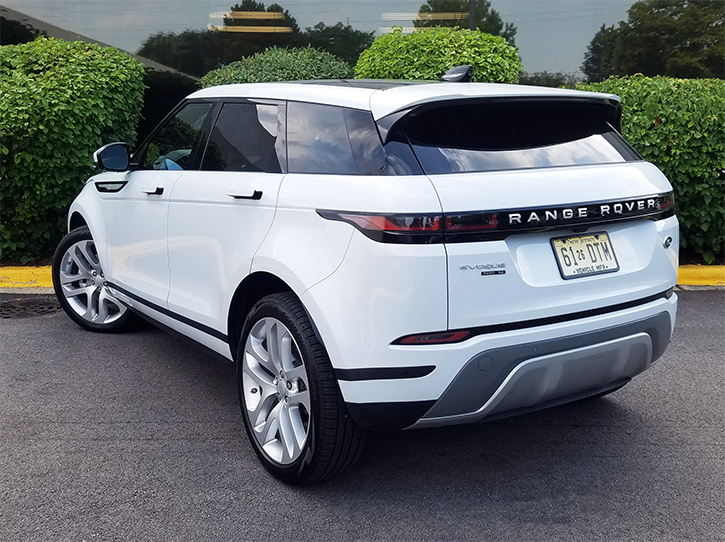 The redesigned Range Rover Evoque sticks with the rakish, “chopped top” look of the previous-gen model, but adds smoother body-styling details and upscale touches such as flush door handles that power out when the vehicle is unlocked.

The two biggest complaints were an overly aggressive lane-keeping assist and a stop/start system that was always showing up late to work. The lane-minder would not be denied when it thought the driver had veered too close to the lane markings—and its definition of “close” was pretty conservative. A forceful wrench of the steering wheel that felt like it wanted to yank the helm from the driver’s hands at times was frequent and disconcerting, all the more so at higher expressway speeds, when momentum is likelier to lead the vehicle toward the outer limits of a lane on a curve. Unlike most stop/start systems, the Evoque’s didn’t refire the engine as pressure on the brake pedal was being released. Instead, it took a press of the accelerator to get the ball rolling, which resulted in delayed, boggy-feeling restarts. Fortunately, both can be switched off—but you’ll still be paying for them during the term of your lease or purchase plan.

The Evoque certainly lives up to the Range Rover name in terms of posh interior materials. The dashboard design is sleek and sophisticated, but the pull-off cupholder lid in the center console (visible below the shift lever in the photo above) is an odd compromise. Rear-seat room is not a strong point; most adults will feel at least a bit cramped back there.

Much less critical from an operational standpoint but still less than ideal is, of all things, the cover for the cup holders in the console. A cover for drink receptacles is a subtle marker of automotive status: mass-market-brand vehicles tend not to have one; premium nameplates usually do. The Evoque cuts things pretty close with a pull-off lid, but if you’re using the cup holders, then the lid has to be stashed someplace. A graphic on the back of the lid suggests the glove box, but if this piece were sized and shaped properly, it could be stowed in the console box and double as a suspended small-item tray. Unfortunately, it’s not.

The second-generation Evoque is not dramatically different visually from the previous package. Styling is evolutionary, with a “chopped-top” look that falls away slightly to the rear still in evidence. Total length is virtually the same, and wheelbase has been increased just 0.8 inch. However, that design choice locks in a tight rear seat with exit difficulties (foot room is tight), and while cargo space has been increased a little, 22 cubic feet behind the second-row seat isn’t really a lot for an SUV. One trick, new feature is flush door handles that pop out from the body when the vehicle is unlocked. 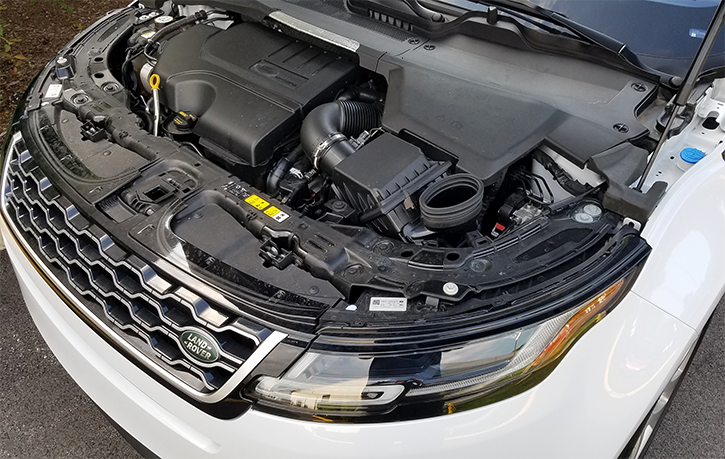 The Evoque’s base turbo 2.0-liter 4-cylinder puts out a healthy 246 horsepower, but if that’s not enough, you can step up to the 296-hp R-Dynamic models.

P250-series Evoques wring 246 horsepower and 269 lb-ft of torque from the engine, gains of nine ponies and 18 lb-ft from the ’19 model. (There will also be a 296-horse P300 version of the turbo 2.0 fitted with a 48-volt mild-hybrid system in the form of a belt-driven motor-generator.) Power is channeled through a 9-speed automatic transmission now with a stand-up shift lever in place of the former pop-up dial gear selector.

The engine is pretty lively, and the transmission is—mostly—smooth and cooperative. With this powerteam the Evoque can tow up to 3306 pounds. As for fuel consumption, the EPA rates it at 20 mpg for city driving, 27 in highway operation, and 23 combined. When this tester put 172.2 miles on the test vehicle, 40 percent of that under city-type conditions, it returned 20.9 mpg.

CG’s test Evoque rode and handled well with the Adaptive Dynamics and a 21-inch wheel/tire package, both optional. The former monitors wheel position and body movements, and then relies on electronically controlled dampers to manage the ride. Standard equipment includes Terrain Response 2, which can automatically tailor the all-wheel drive to five different surface settings, or allow the driver to individually select a mode; hill-descent control; All Terrain Progress Control, a low-speed “cruise control” that maintains a consistent pace over rough terrain; and brake-enabled torque vectoring.

On the SE, the redesigned interior includes Touch Pro Duo, a pair of central touchscreens, neither of which is impenetrably difficult to follow or work. The upper one displays and controls things like standard navigation, audio, smartphone connectivity, and more. The lower one governs the standard dual-zone climate system. Two big dials are present to set temperature, but by pressing a fan-function icon, the right-side dial becomes a speed-setting rheostat. A 12.3-inch screen hosts virtual driving controls, including a configurable information display. 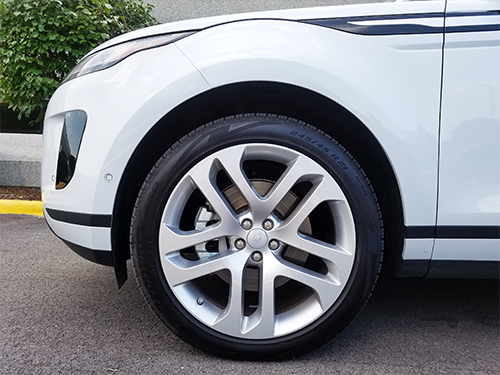 The SE that Consumer Guide tested started at $48,195 with delivery. In addition to standard items already mentioned, that also buys LED headlights with automatic high-beam control, heated auto-dimming power mirrors with memory function, ambient lighting, push-button starting, Wi-Fi hotspot, Apple CarPlay/Android Auto connectivity, emergency braking, driver-condition monitor, and rear cross-traffic monitor. However, a short list of the considerable option load that ran the total cost up to $64,010 included a hands-free tailgate, keyless entry, blind-spot assist, and satellite and HD radio—some things you might expect to be built in to a luxury-brand vehicle, especially one that’s a step up from the base model. OK, so we found one more thing to grumble about. . .

The 2020 Range Rover Evoque’s one-of-a-kind looks and regal cabin trimmings make it look right at home in luxury-shopping-mall parking lots, and, though we doubt its typical buyer will take it off-road much, it has the capabilities to handle significantly rougher terrain. However, there are plenty of other premium-brand crossovers that offer better value for the dollar, fuel economy, and cargo/passenger versatility.