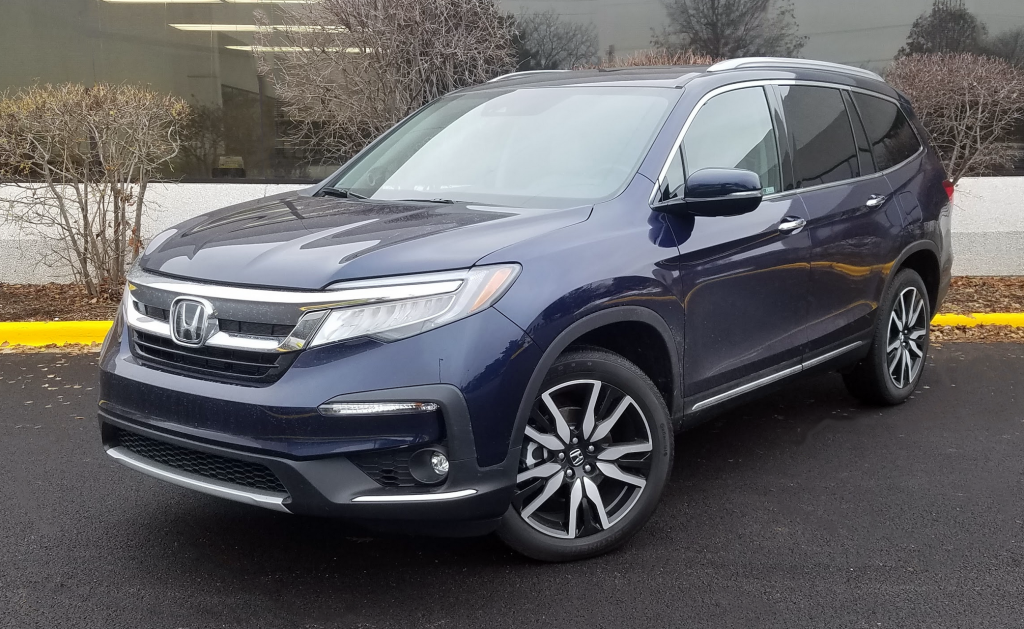 The great: Roomy, comfortable cabin with excellent space for both passengers and cargo; desirable infotainment upgrades for 2019

The good: Well-sorted ride and handling

The not so good: Unconventional gear selector requires acclimation

There’s quite a bit that’s new with the 2019 Pilot, Honda’s midsize 3-row sport-utility. Spring for an Elite model like the one that Consumer Guide editors tested and you’ll be exposed to the full complement of the changes.

Exterior styling has been refreshed front and rear. The 9-speed automatic transmission standard in Touring and Elite models is retuned for smoother shifts, and operation of the stop/start feature takes on a more seamless feel. Inside are a redesigned instrument cluster, wider folding front-seat armrests, and retractable sunshades for the second row. A hands-free power liftgate promises to make cargo loading more convenient. In the tech department, the infotainment system is easier to use, and there’s now 4G-LTE Wi-Fi hotspot capability, wireless smartphone charging, a CabinTalk intercom feature, and a redesigned Blu-ray/DVD Rear Entertainment System. 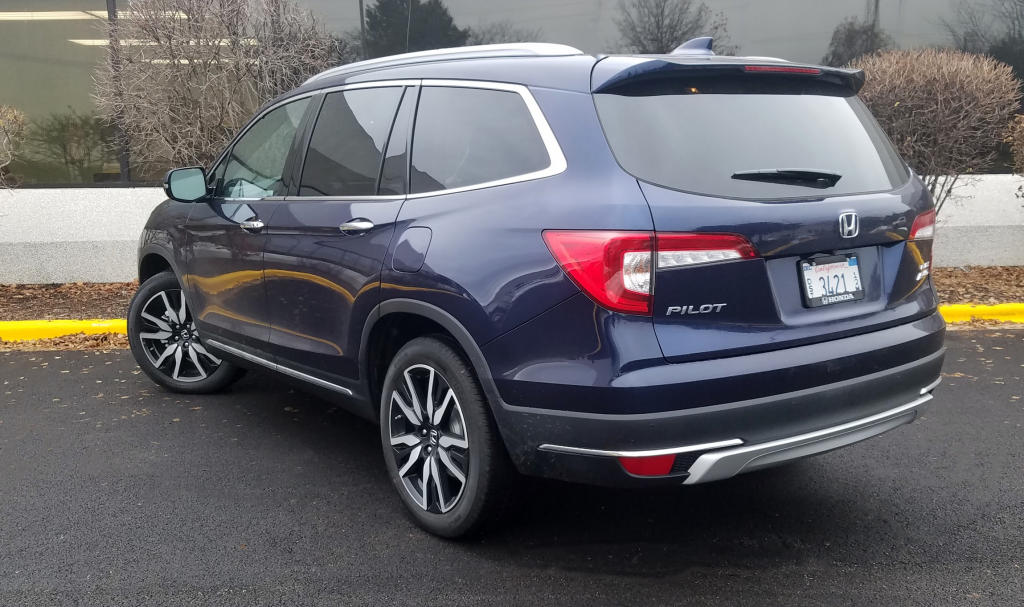 The 2019 Honda Pilot gets a light styling refresh on the outside, but its best new features are on the inside.

You’ll get all of that in a Pilot Elite that sells for $49,015 with delivery. Of course, there’s more. Overhead sit roof rails and a panoramic sunroof; underneath roll 20-inch alloy wheels clad in 245/50R20 all-season tires. Headlights (with automatic high-beam control), taillights, and fog lights are all LED. External power-folding mirrors are heated and auto dimming.

More about the 2019 Honda Pilot 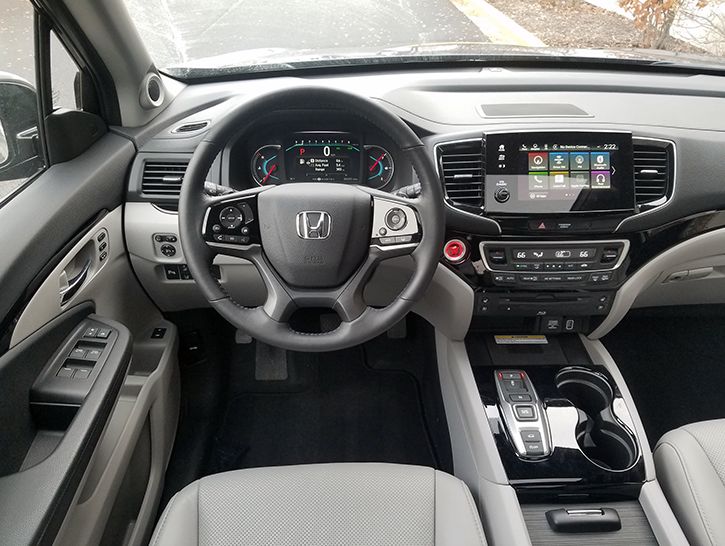 Among the welcome updates to the 2019 Pilot’s interior are the availability of Honda’s Display Audio infotainment system, 4G LTE Wi-Fi connectivity, CabinTalk in-vehicle intercom system, and the CabinControl app (which allows some infotainment, climate, and navigation-system functions to be controlled via smartphone).

Interior appointments start with leather-upholstered seating for seven (with second-row captain’s chairs) and a leather-wrapped heated steering wheel. The heated and ventilated front seats include a 10-way-adjustable driver’s seat with memory and a 4-way power passenger seat. The heated second-row seats incorporate a “1-touch” slide feature to open up access to the third row. 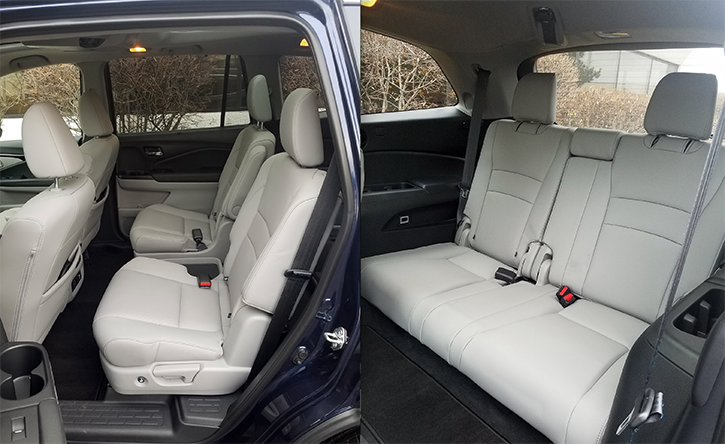 Even in the top-line Elite model, the Pilot’s cabin isn’t as overtly posh as the upscale trim levels of some class rivals, but it has a high-quality look and feel nonetheless. The Pilot is among the most commodious three-row midsize SUVs; passenger room is ample in the second row and spacious enough for average-sized adults in the third row.

It’s not just a large collection of features that makes a vehicle a Consumer Guide “Best Buy“—and the Pilot is one. It’s how well those features work and serve their purposes.

All ’19 Pilots are powered by a 3.5-liter V6 that develops 280 horsepower. It’s a pleasingly smooth engine that is peppy in town and will cruise well on the highway, where it’s not afraid of a little sustained speed. That said, midrange acceleration sometimes finds the 9-speed trans a little slow to kick down. Pilots with the 9-speed and all-wheel-drive—the only way the Elite comes—are rated by the EPA at 19 mpg in the city, 26 mpg on the highway, and 22 combined. This driver averaged 18.74 mpg from a stint of 175 miles, 40 percent of which was in city driving conditions, but periods of that sustained speed mentioned above might have played a hand there. An “Econ” setting tempers power delivery a bit for fuel savings. The automatic stop/start mechanism has the same goal. It is pretty subtle in operation. 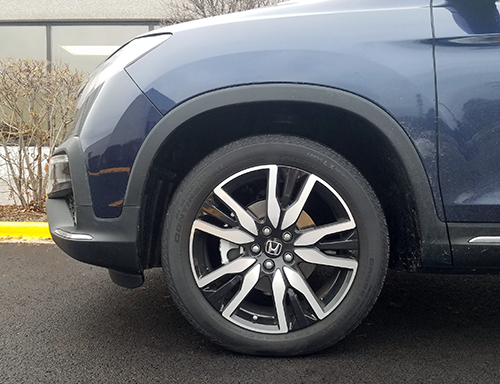 Ride is firm enough to hear and sense surface irregularities, yet damping is effective in not letting this jolt the cabin. There’s some lean in cornering. Steering and braking are responsive and predictable.

There’s nice leg- and headroom in the front two rows, with a true sense of width across the cabin. Good glass area and driver sightlines accentuate this sense of spaciousness. Seats are supportive, and the seat-back angle of the middle captain’s chairs is adjustable. Third-row seats are not out of bounds to adults up to about 6 feet tall, but legroom is just passable, the cushion is kind of low, and headroom is “close.” Also, rear-seat entry and exit are no cinch, even with the middle seats’ sliding feature.

For the most part, cabin materials have an upscale look and feel (though even in the Elite the tops of the rear doors are textured plastic with no underlying give). This reviewer liked the unified look of the instrument cluster in which the left-side temperature gauge and right-side fuel gauge are graphically tied to the colorful central speedometer/tachometer/info display. The in-dash touchscreen is easier to use for audio thanks to a new external power/volume knob in place of the previous unloved virtual “slider.” In the back of the console there is a climate control panel and several device inputs for use by middle-row passengers. One other control of note is the curious “shifter” for the 9-speed transmission, which consists of a series of buttons and a flip-up lever on the console, an arrangement that takes some user acclimation. Ostensibly designed to free up cabin space—there’s no conventional stand-up shifter—this array is at least as long as any console quadrant around, and a good number of modern cars have low-profile conventional shift knobs that are hardly obstructions in their interiors.

The interior also earns points for fine personal-item storage. In front there’s a big glove box and a very spacious console box under a sliding cover; a tray under each front-door armrest and a long pocket at the bottom of the door panels; a wireless charging platform at the front of the console; and 2 open cup holders. The middle row gets twin seat pouches; cup holders in the door armrests and in the low, flat “consolette” between the seats (a good place to put a purse, books, snacks, etc.); and lower-door pockets. The third row has a cup-holder/bin combo molded into each sidewall.

Rear cargo space is limited with the third-row seats up, but the bumper-height floor panel can be removed to add a little more depth to the cargo bay. With the 60/40-split seats down (a tug on a cord quickly raises or lowers them) and the floor panel in place, there’s a long, ample cargo hold—though liftover to clear the bumper seems a little tall. An open cubby to the left will hold incidentals. This reviewer had to wave a foot around more than a few times but the hands-free tailgate did finally open.

To be sure, the Elite is the “even the kitchen sink” model. However, some of its key features can still be had in cheaper models. That’s how the Pilot earns its wings.

The Pilot receives a lengthy list of updates for 2019 that keep its 2016-model-year basic design at the forefront of the three-row midsize SUV segment–and earn it another Consumer Guide Best Buy award.