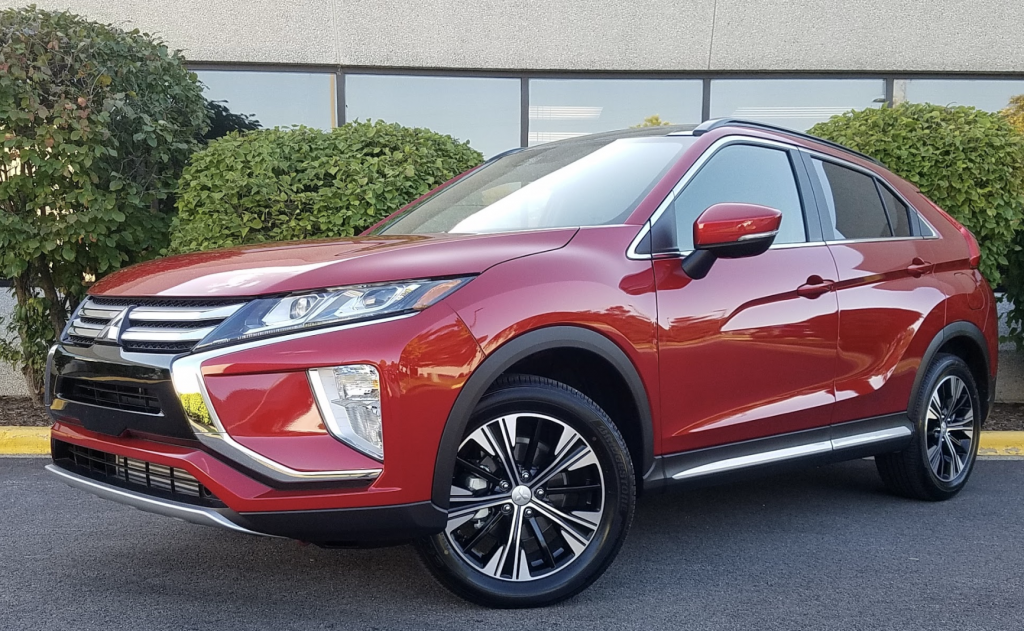 The not so good: High-tech safety features only offered on top-line models

Mitsubishi added the Eclipse Cross to its portfolio of crossovers for 2018, which we covered with both a First Spin report and later – in top-line SEL trim – with a Test Drive review. 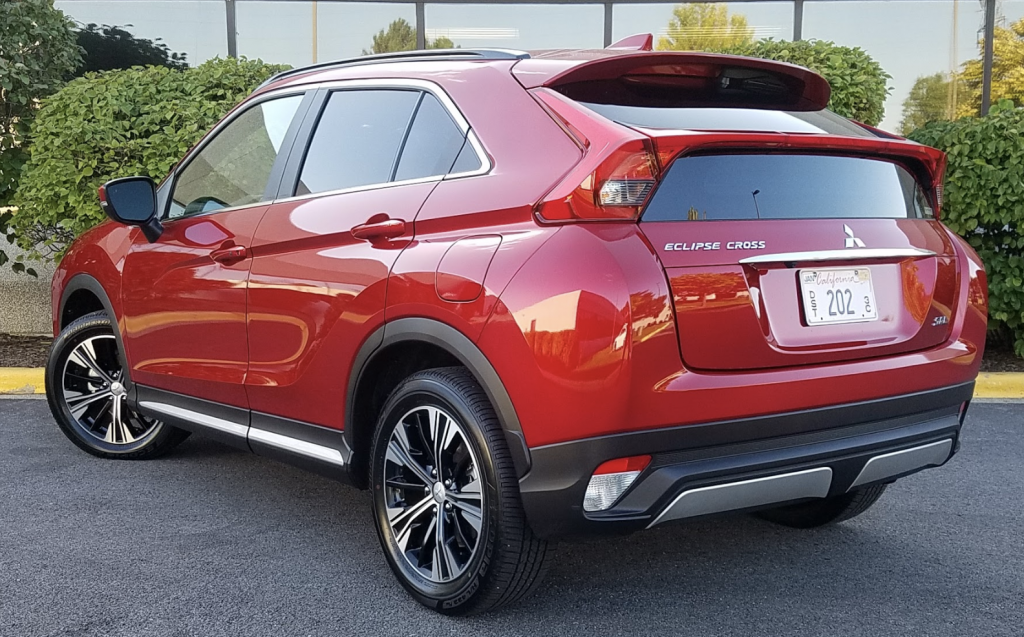 An unusual Eclipse Cross styling element is the crossbar that divides the rear window. It not only looks a bit odd in the rearview mirror, it can block your view of a following car’s turn signals — or, on the positive side, its bright lights.

We again tested an Eclipse Cross SEL for 2020, and as it hasn’t changed significantly since 2018, we invite you to read our 2018 Test Drive review for more details … and the First Spin for info on other trim levels.

But that’s not to say the Eclipse Cross hasn’t changed at all. For 2019, an SP version was added as a mid-level offering that brought a rear spoiler and front/side/rear air-dam extensions. What’s new for 2020 is that all trim levels – ES, LE, SE, and SEL (the SP being discontinued midyear) – now come standard with front-wheel drive (previously, only the base ES did), with Mitsubishi’s Super All-Wheel Control (S-AWC) all-wheel-drive system adding $1600. Also, both the penultimate SE and top-line SEL now come standard with forward-collision warning and mitigation with pedestrian detection (mitigation only functioning below about 50 mph) along with lane-departure warning, two rather basic high-tech safety features that – oddly – only came in the SEL’s optional Touring Package last year. Continuing as standard on those two trim levels are blind-spot alert with lane-change assist and rear cross-traffic alert, with the SEL’s Touring Package adding high-speed forward collision mitigation (functioning up to about 85 mph) and adaptive cruise control. And that’s the version we again tested.

More and more small crossovers are going with CVT automatic transmissions these days, and a few have small, turbocharged engines. The Eclipse Cross has both – a combination that often exhibits some unusual driving characteristics.

While that’s the case here, the combination works well enough. The little turbocharged engine provides a decent full-throttle jump off the line (not always the case with small turbos) and the transmission kicks down fairly quickly when the throttle is pressed while underway. But the transmission also exhibits some of the traditional CVT “rubber band” effect in normal driving, though it’s not so much annoying as just noticeable. 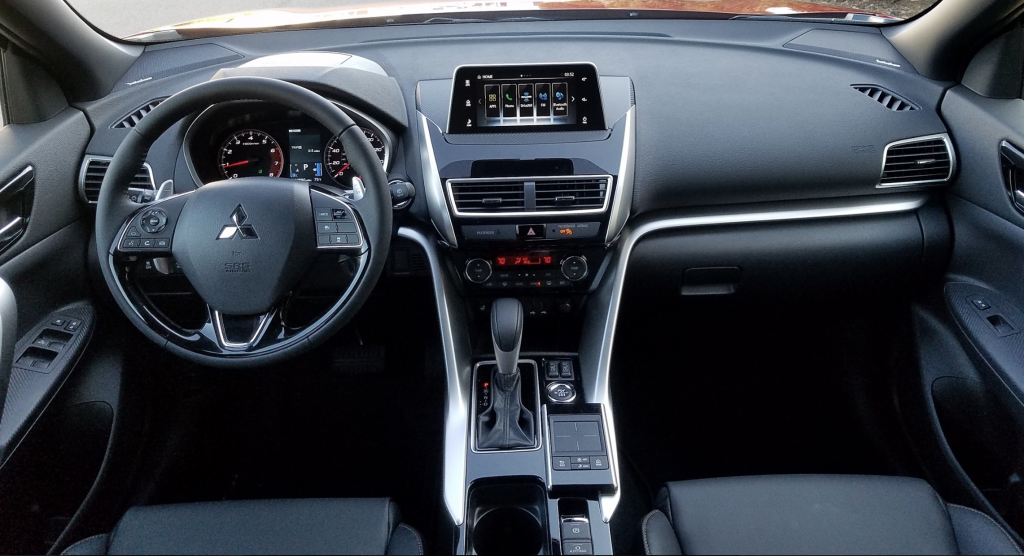 The interior is nicely trimmed and includes a decent amount of storage space. We’re not fans of the console touchpad interface for infotainment controls (right of the shift lever), but one can also use the touchscreen — which we prefer.

One thing noticed upon entry – particularly to the rear seat – is that door closings sound kind of “tinny.” While the front seats felt fine, a couple people commented that the rears felt somewhat hard, though the seat backs recline for more comfort, and overall passenger space is decent for all but the big and tall. Cabin storage space is also reasonably good, as is visibility – aided on our tester by a 360-degree camera system activated by a handy steering-wheel button. 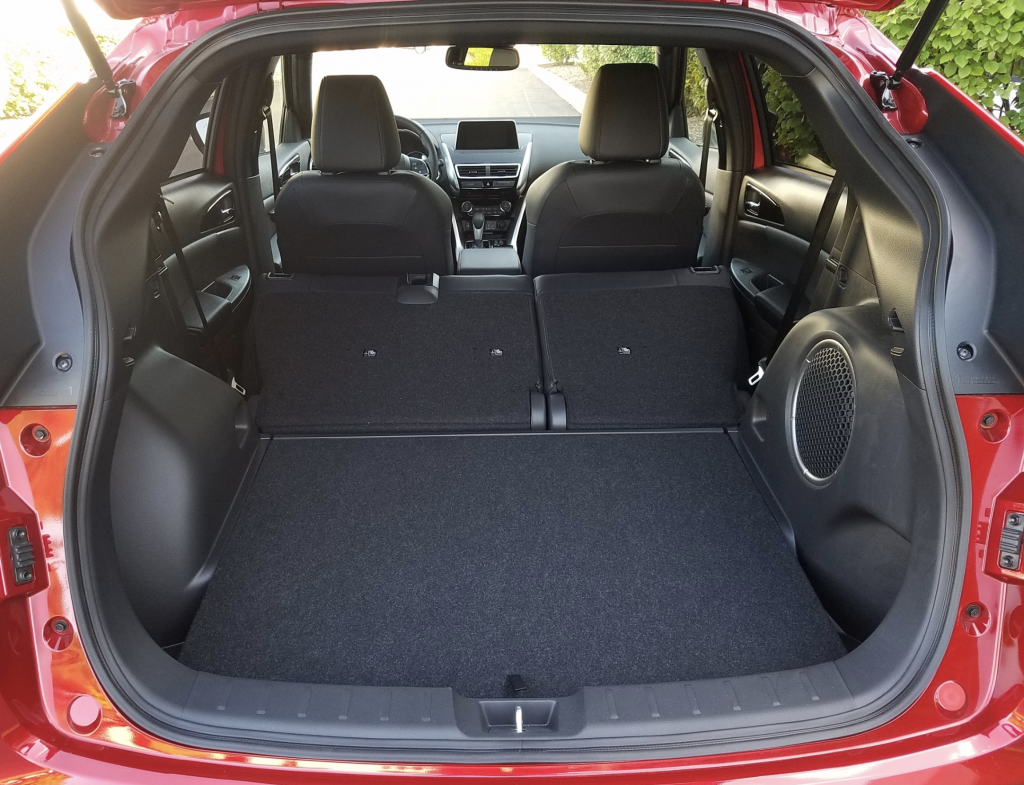 There’s decent cargo room, and folded rear seat backs rest nearly level with the cargo floor. But the area is on the narrow side and there’s scant underfloor storage space, though side bins at the back help.

Cargo space in back is also good, and while the folded rear seat backs don’t lay quite flat, at least they rest level with the cargo floor. There’s just a little bit of “hidden” space under the floor.

We commented before that the console touchpad seemed to be more of a gimmick than helpful, but at least you can also use the touchscreen to input infotainment commands. Really appreciated by some drivers was the head-up display, a neat and unusual feature for the class.

It used to be that the Eclipse Cross was woefully far behind in offering high-tech safety features, at least on anything but the very top-line model with an option package – a combination that pushed the price past 31 grand. And while that’s where this test vehicle sat as well, many of those features have been added as standard on the SE and SEL trim levels for 2020, with an AWD SE listing for about $28,000 – a somewhat more palatable figure.

Left to right: While we didn’t much like the console touchpad for infotainment adjustments, thankfully, you can also use the dashboard touchscreen. Just above it is the S-AWC button that allows you to choose Auto, Snow, and Gravel AWD modes. A row of handy buttons left of the steering wheel include head-up-display adjustments and headlight height adjustment, both really appreciated. Also appreciated was the button on the steering-wheel spoke that activated the 360-degree camera system, the handiest solution to this we’ve ever seen.

Every vehicle has its competitive strengths, and those of the Eclipse Cross include styling (subjective, of course) and the availability of some neat and unusual features, such as the head-up display and instantly accessible 360-degree camera system. It also gets Mitsubishi’s terrific and rather unheralded 5-year/60,000-mile bumper-to-bumper warranty with 10-year/100,000-mile powertrain coverage. But the neat features mentioned above are only offered on the top-line model, which leaves the line as a whole somewhat behind our top picks in the category.

Intended as a sporty offering in the compact class, the Eclipse Cross looks the part more than acts it — though dynamics are fine overall. The tested top-line SEL with Touring Package offers a lot of high-end features, but only if you can stomach its near-$32,000 price tag.