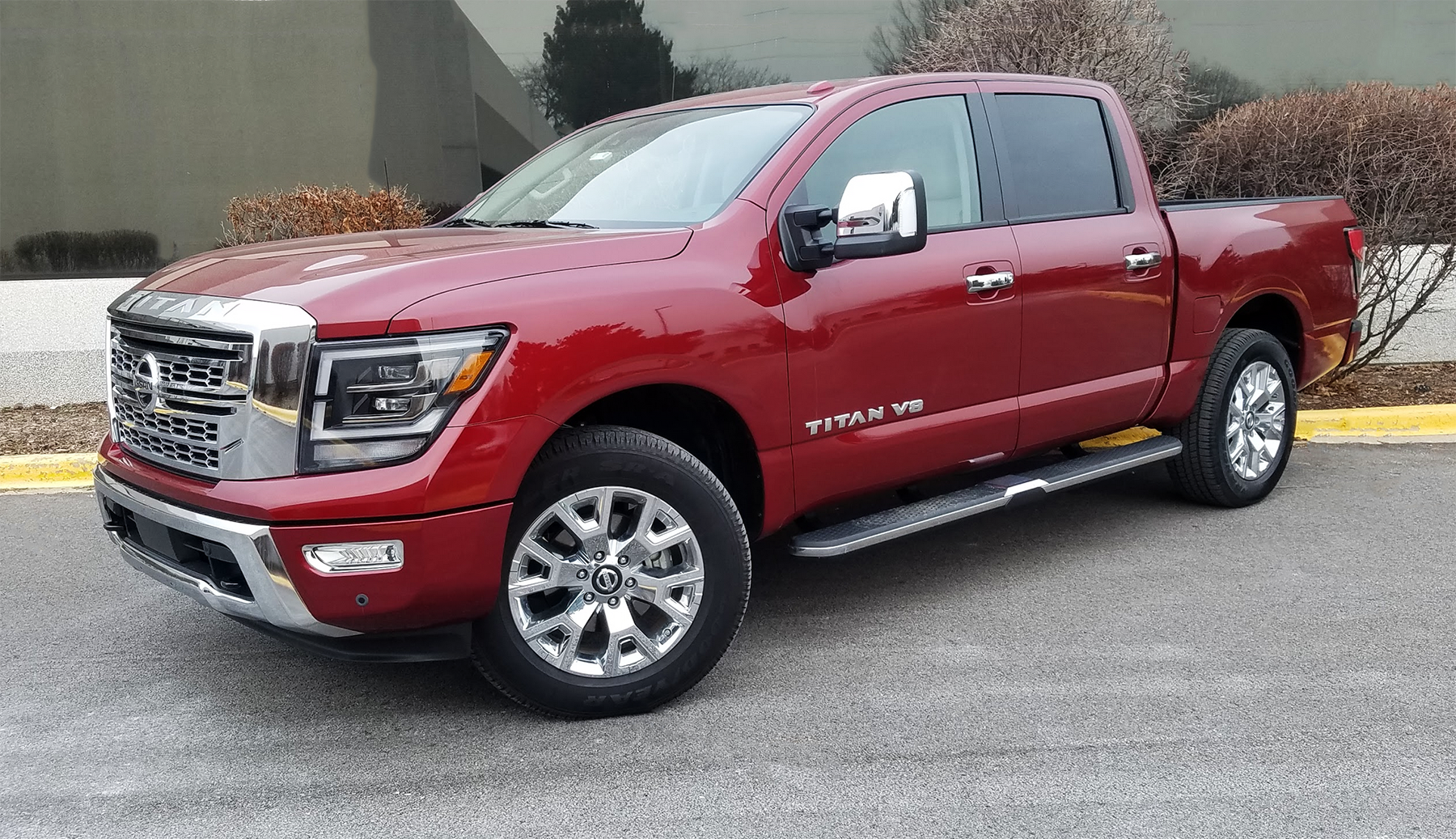 An idea that has circulated among your dear friends here at Consumer Guide for some time now is that it’s pretty hard to find a genuinely bad car. Some obviously do this vehicle thing better than others, but these days even the humblest conveyances do a pretty good job of getting people and their stuff moved around safely and efficiently—allowing for size and price of course. 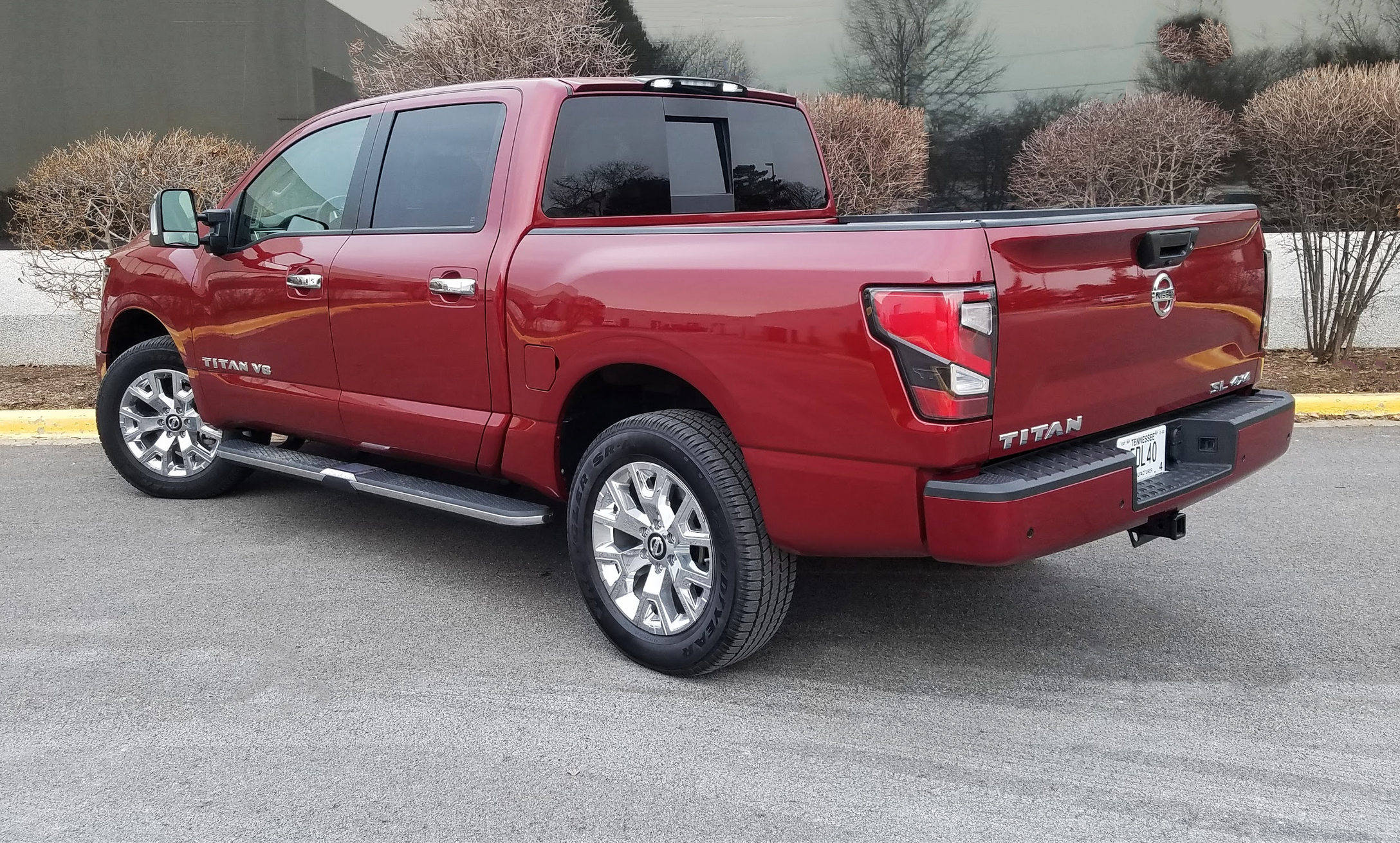 The SL is the penultimate trim level in the Titan model lineup, second only to the top-dog Platinum Reserve.

The same seems to be true in the narrower world of full-sized pickup trucks. Every one of the six brands that sells such a truck in the U.S. has paid attention to ride quality, powertrains, and feature content. All in all, the trucks are the better for it. Ultimately, though, there’s no getting around the fact that some are clearly better than others, even if the one at the back of the pack—the Nissan Titan—is still pretty good.

Nissan and Toyota took on a daunting task some years ago when they decided to compete with Ford, Chevrolet, GMC, and Dodge (now Ram) in the quintessentially American full-size pickup field. They keep on plugging along, but with limited product lines (no ¾- or one-ton models) and fewer—make that increasingly fewer—cab/bed and powerteam choices, sales still lag far behind the domestics.

The Titan’s control layout is straightforward and user-friendly, though some controls are a bit of a reach. The center console boasts plenty of handy nooks and crannies, and a detachable tray.

The 2020 Titan tested by CG is the recipient of a midcycle freshening. It includes new safety and convenience features, a different transmission, and revised styling. While there’s a slight boost in power, it is in what is now the only engine available in a pared-down model roster. The 5.6-liter V8 gets a 10-horsepower increase to 400, but the 5.0-liter turbodiesel V8 option for the “heavy 1/2-ton” Titan XD has been deleted. The two-door regular cab has been axed as well. This leaves “conventional” Titans available as an extended King Cab with a 6.5-foot cargo bed or a full four-door Crew Cab with a 5.5-foot bed, while the XD is restricted to a 4-wheel-drive Crew Cab with 6.5-foot bed.

Output of the 5.6 V8 gives the Titan something on which to hang its hat: the most standard horsepower in the big-pickup corral. With 413 lb-ft of torque, the engine feels strong, decently responsive, and not overly loud under acceleration. The new 9-speed transmission, which replaces a 7-speed unit, kicks down promptly to render effective passing power (though at least one of our editors was less impressed by its performance in general operation). EPA estimates for a 4-wheel-drive Titan Crew Cab are 15 mpg in the city, 21 mpg on the highway, and 18 combined. This tester averaged 14 mpg after a 214-mile stint that involved 60 percent city-type driving. 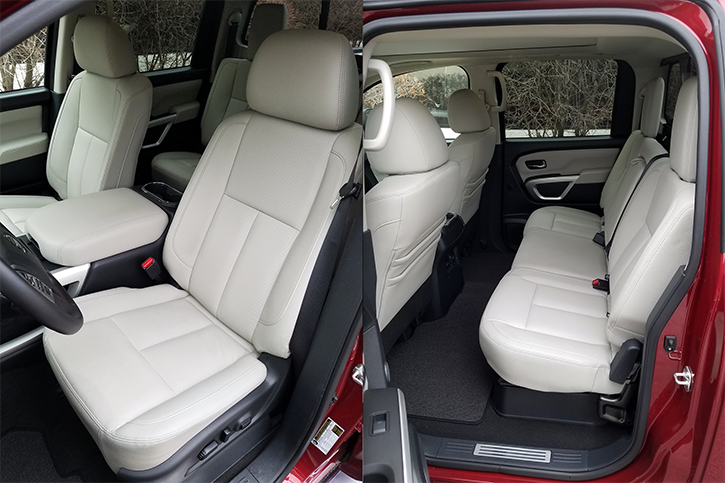 Standard leather upholstery contributes to the upscale look of the SL trim level, but the overall ambiance doesn’t quite match the level of higher-line Ford F-150 or Ram 1500 models.

For 2020, the Titan’s 5.6-liter V8 engine gets a 10-horsepower boost, to 400 total, and a new 9-speed transmission in place of the previous 7-speed unit. Flashy 20-inch chrome wheels come standard on the SL trim level.

The interior exhibits a nice grade of soft materials on the seats, armrests, and door panels, but the SL stops short of being fully luxurious. Dash trim is woodgrained plastic, not the real deal. There’s no underlying give to the textured plastic atop the doors. Audio inputs made through the touchscreen are programmed easily. Climate controls benefit from twin dials to set temperature, though a number of buttons are provided to handle other functions. The dials and central information screen in the instrument display are big and legible. 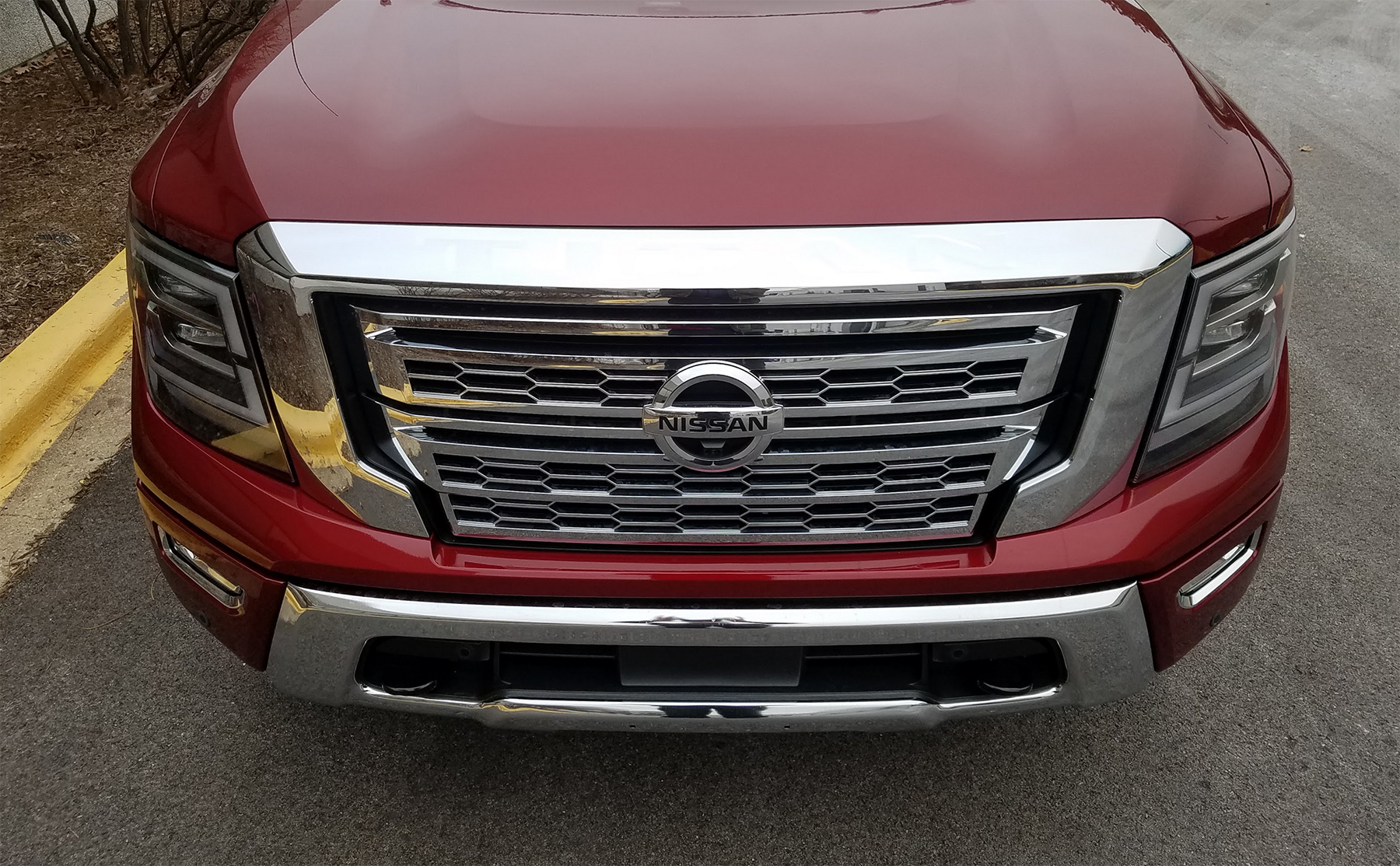 Titans get redesigned grilles and new headlights as part of the 2020 freshening.

While the Titan cabin is roomy compared to lots of other things on the road, it isn’t as spacious as other full-sized pickups. Headroom is not as towering as it is in the homegrown trucks—and it is diminished under the newly optional dual-panel moonroof that was on the test truck. The rear legroom would be great in any sedan you could name, but you’ll find more of it in other large crew cab pickups. Three adults will easily fit across the rear seat.

Front-row storage facilities are a big glove box and capacious console box with an adjustable small-item tray, pockets in the sides of the console, long door pockets with twin cup/bottle holders, and two open cup holders in the console. Rear-seat passengers can take advantage of twin pouches on the back of each front seat, door pockets with bottle holders, and cup holders in the pull-down armrest and in the back of the console above the rear-seat air-conditioning vents. The rear 60/40 seat offers flexible in-cab storage for larger items. Seat backs can fold down to form a storage platform, or the cushions can be raised to reveal a floor-level platform that itself opens to expose storage bins.

The Titan’s ride is another thing that, while acceptable, is done better elsewhere. Though hop over bumps was controlled well when the leaf-spring-supported bed was empty, the test truck was “busy” with a persistent wiggle over pavement ripples encountered in speedier expressway driving.

A Titan SL with part-time 4-wheel drive starts at $57,190 before options or delivery, and it comes with a 5-year/100,000-mile warranty. It just doesn’t seem as well rounded as other big trucks that cost about the same. 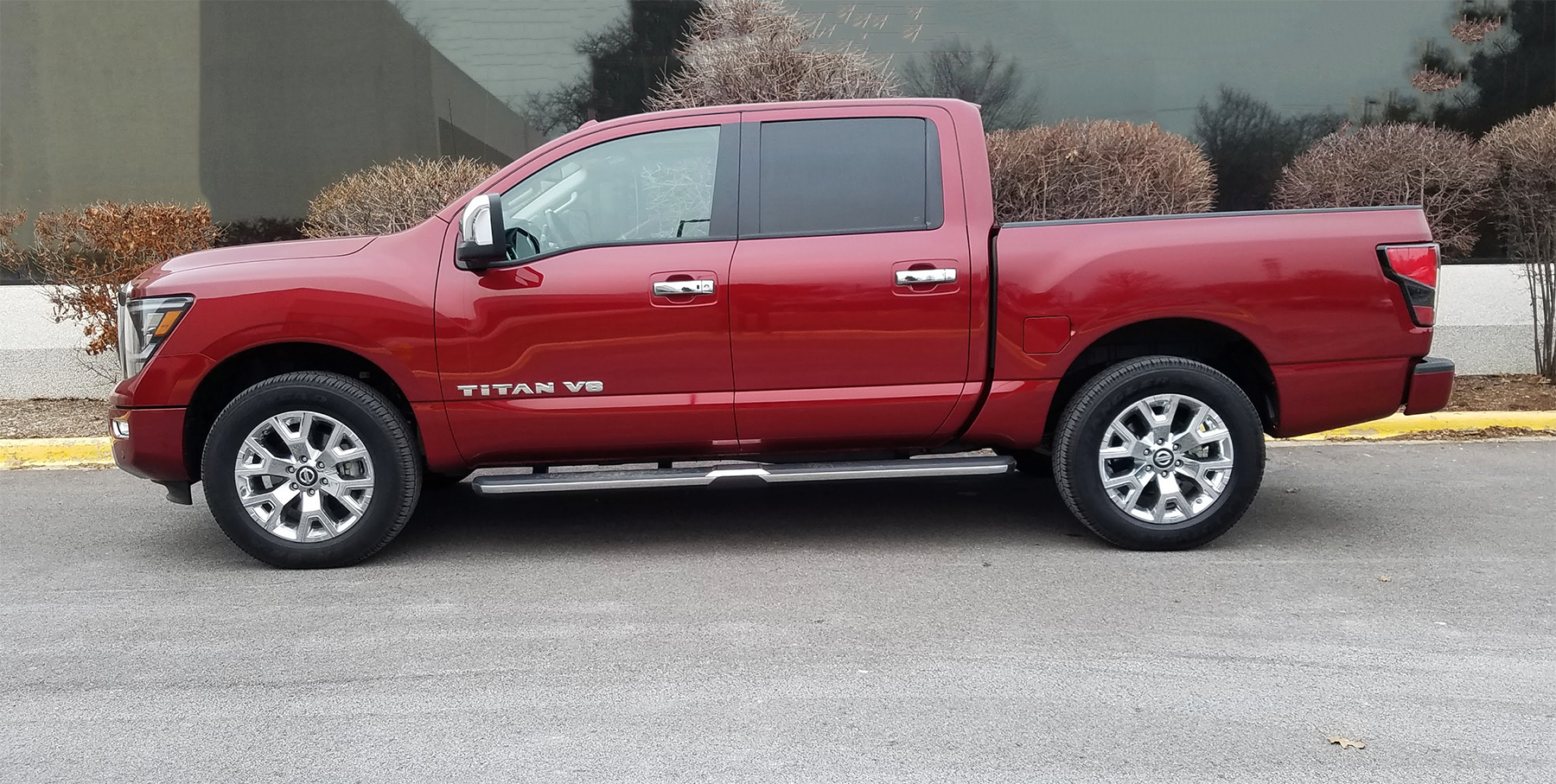 The Nissan Titan doesn’t offer the same level of features, powertrain choices, or all-around refinement as its domestic rivals, but it’s not without its charms–and the 2020 freshening adds some welcome upgrades.

Have you checked out our fun and informative podcast? 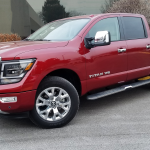 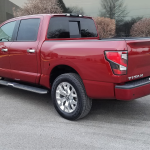 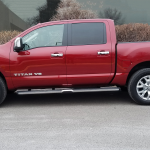 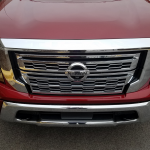 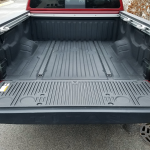 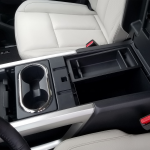 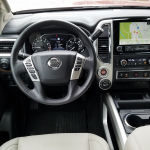 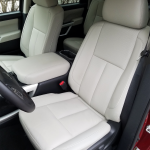 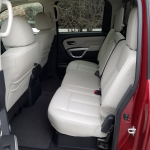 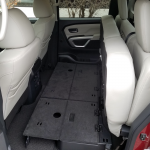 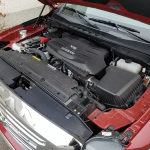 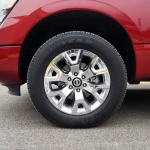