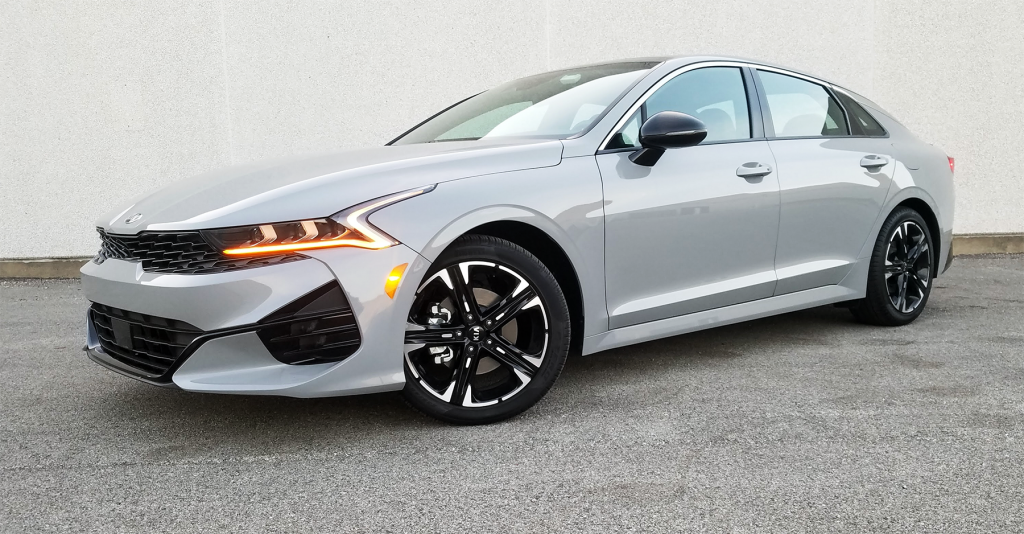 The not so good: Ride can be a bit stiff over sharp bumps

Kia has put an end to Optima-ism, but what comes in its wake should still appeal to car buyers who drink from a half-full glass.

The new take on the brand’s midsize sedan for 2021 is the K5 (which actually is what the Optima was called back home in South Korea and other international markets). It is slightly bigger than its predecessor with a pared-down but more powerful choice of engines and the availability of all-wheel drive—something the Optima never had. 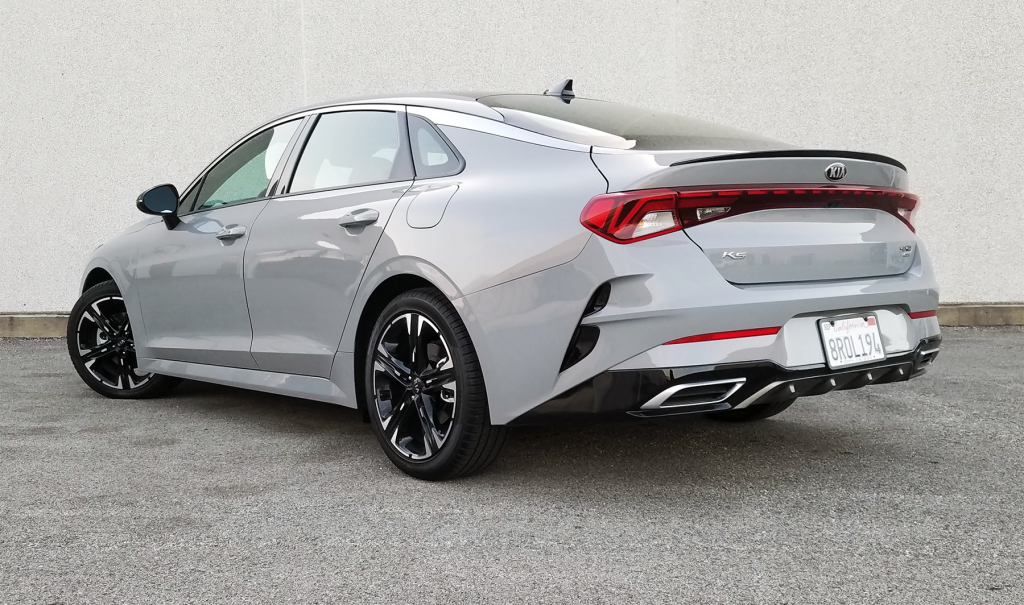 Kia’s mainstream midsize sedan is redesigned for 2021, dropping its Optima name in favor of the K5 nameplate that Kia uses on this car in other global markets. Striking new styling and the availability of all-wheel drive are highlights.

K5 models include the front-wheel-drive LX, LXS, GT-Line, EX, and GT, plus the all-wheel-drive LXS and GT-Line. Consumer Guide tested a GT-Line with AWD, a sport-themed—even if not truly sporty—car. As a number of other automakers do with certain vehicles, Kia gives the GT-Line certain appearance features from its highest-performance model but reserves the real go-faster hardware for the GT. With options, a test car that started at $30,055 including delivery reached $31,300.

The K5’s interior layout is sporty and dynamic, but not at the expense of ergonomics. All K5s get an “aircraft-style” shift lever, and AWD GT-Lines get a wireless charging pad, heated steering wheel, and heated front seats.

All-wheel drive comes at a $2100 price premium for the LXS, but it adds $3700 to the GT-Line where it is accompanied by the Premium package that is a $1600 stand-alone option for the front-drive version. Package features include a panoramic sunroof, LED projector headlights, wireless device charging, a forward-collision-avoidance system that can detect cyclists and obstacles at junctions, adaptive cruise control, LED overhead interior lighting, heated front seats and steering wheel, satellite radio, and Kia’s UVO link remote connectivity. The AWD system has an electronically controlled transfer case and comes with a “Snow” mode for better all-weather performance.

The K5’s infotainment touchscreen is easy to use (kudos for the physical volume knob) and boasts some fun “eye-candy” graphics–such as radio-station readouts that mimic the look of vintage vacuum tubes.

Regardless of driveline, the GT-Line emulates the GT in so far as it has the bumpers, grille, rear spoiler, and leather-wrapped flat-bottom sport steering wheel of the hotter model. Other GT-Line standards include LED fog lights and taillights, 18-inch alloy wheels with 235/45R18 Pirelli P-Zero all-season tires, SynTex leatherette-and-cloth upholstery, charcoal headliner, and a 10-way power driver’s seat. 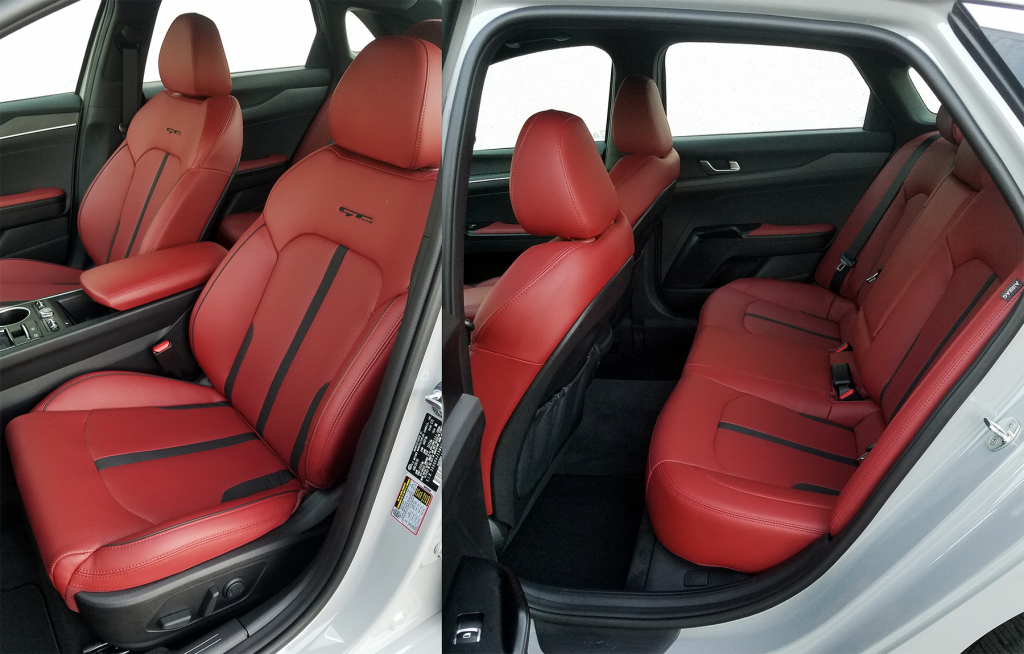 There’s good space for adults in both the front and rear seats, though the optional panoramic sunroof’s housing can cut into headroom a bit for extra-tall occupants. The GT-Line Red SynTex (synthetic leather) upholstery adds pizzazz.

The GT-Line engine is the K5’s base 1.6-liter turbocharged 4-cylinder paired with an 8-speed automatic transmission. The engine makes 180 horsepower at 5500 rpm and 195 lb-ft of torque at 1500 rpm. With the early arriving torque; a fast-acting turbo; and smooth, effective transmission the car is an energetic driver, particularly around town. EPA fuel-economy estimates are 26 mpg in the city, 34 mpg on the highway, and 29 mpg combined, but with 80-percent city-type driving in a 72-mile test, this driver topped the combined number at 29.6 mpg. 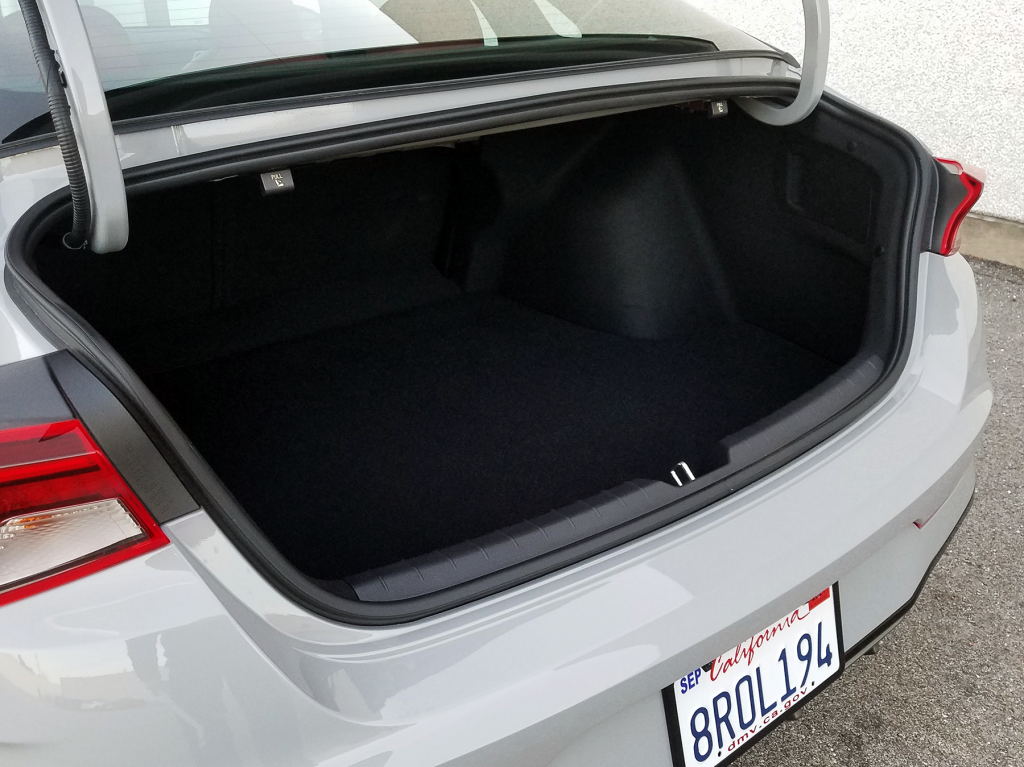 There’s 16.0 cubic feet of space in the K5’s trunk… that’s on par with the best in the mainstream midsize-sedan class.

K5s are built on an all-new “N3” platform that Kia says is stronger and quieter than the architecture of the previous Optima. Underneath is a fully independent suspension with MacPherson struts in front and multiple links in back. This setup provides decent ride quality most of the time, the exceptions coming on hard impacts, where damping seems a little overmatched. Though steering feel is a little thin, response to inputs is alert, and handling is composed and confident overall.

The test car displayed an upscale look and feel inside, with a nice level of soft-touch materials throughout. The seats, with “GT-Line” embroidering and black accents, were comfortable and supportive. Driving controls are large and legible, and the touchscreen makes for easy audio inputs that can be summoned by thumb buttons on the steering wheel. Note, though, that nav-equipped K5s, don’t have the Apple CarPlay/Android Auto smartphone compatibility that those with the base infotainment system do. The climate system has two handy dials for temperature settings above a short bank of buttons for other functions.

The K5’s standard engine is a turbocharged 1.6-liter 4-cylinder that makes 181 horsepower. The line-topping GT model gets a 290-hp 2.5-liter turbo four. GT-Line models come with 18-inch alloy wheels in place of the base models’ 16s.

Front-seat passengers won’t ever feel crowded, and drivers enjoy good vision to just about any direction. They can stash personal items in an ample glove box, a smaller console box, modest door pockets, and exposed cup holders in the console. In back, there’s big legroom and enough headroom for folks up to about 6 feet. It could be possible to get three adults across in a pinch. Occupants will find cup holders in the pull-down center armrest, smallish rear door pockets, and pouches on the backs of the front seats.

A good-sized trunk holds 16 cubic feet of cargo. Rear seats retract in a 60/40 split, but they don’t rest exactly flat and they sit a little higher than the level of the trunk floor. However, there is a panel to smooth the transition between the two areas.

Features, driving demeanor, and price make the Kia K5 a worthy competitor for the affections of midsize-sedan shoppers. It’s a car for optimists and Optima-ists alike.

By any name, Kia’s redesigned midsize sedan is a compelling new vehicle. The K5 gets sleek fastback-esque styling with lots of distinctive design flourishes inside and out, plus an impressive list of up-to-the-minute available features. If the GT-Line’s performance isn’t spicy enough to match its sporty looks for you, the 290-hp GT is an option. 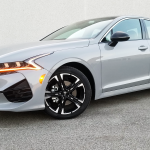 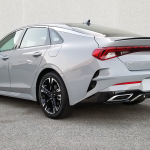 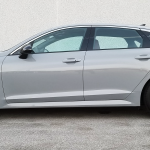 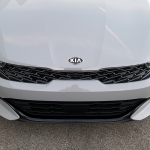 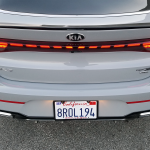 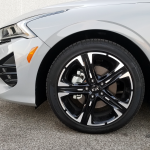 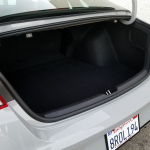 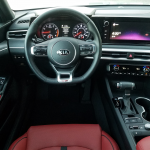 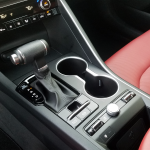 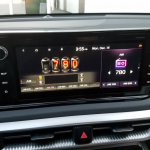 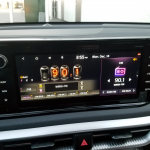 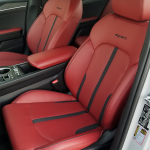 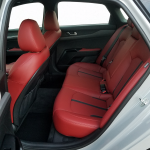 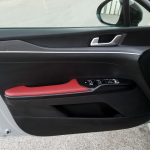 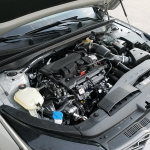