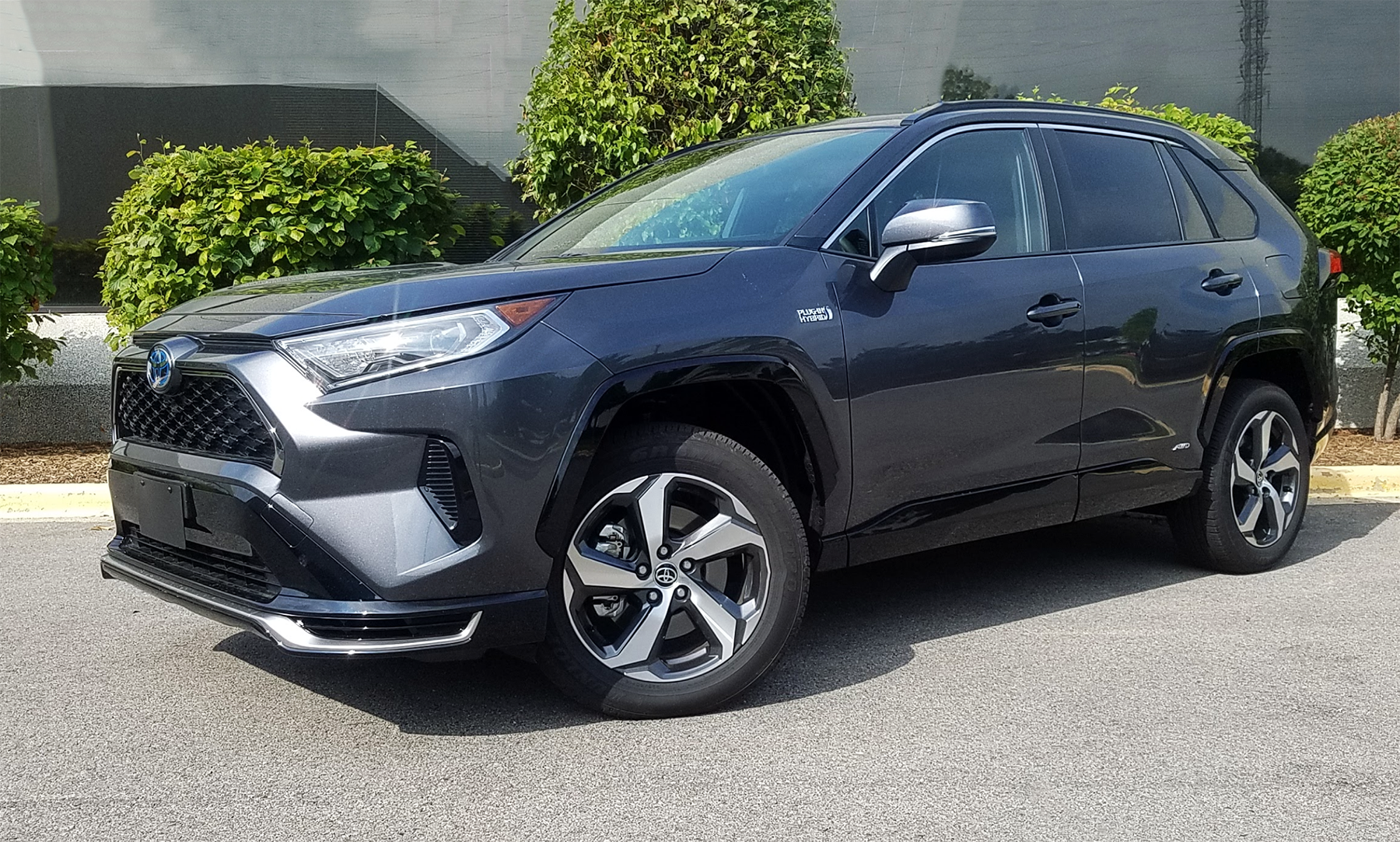 The not so good: Mediocre front-seat space for larger folks, some so-so interior materials

From Toyota’s perspective, the RAV4 compact SUV already is a “green” vehicle—as in long green. It far and away is the brand’s best-selling vehicle line (2019 U.S. sales of 448,071, a good 111,000 more than runner-up Camry per Automotive News). Now Toyota makes its little money-maker greener for 2021 with a new Prime plug-in-hybrid version. 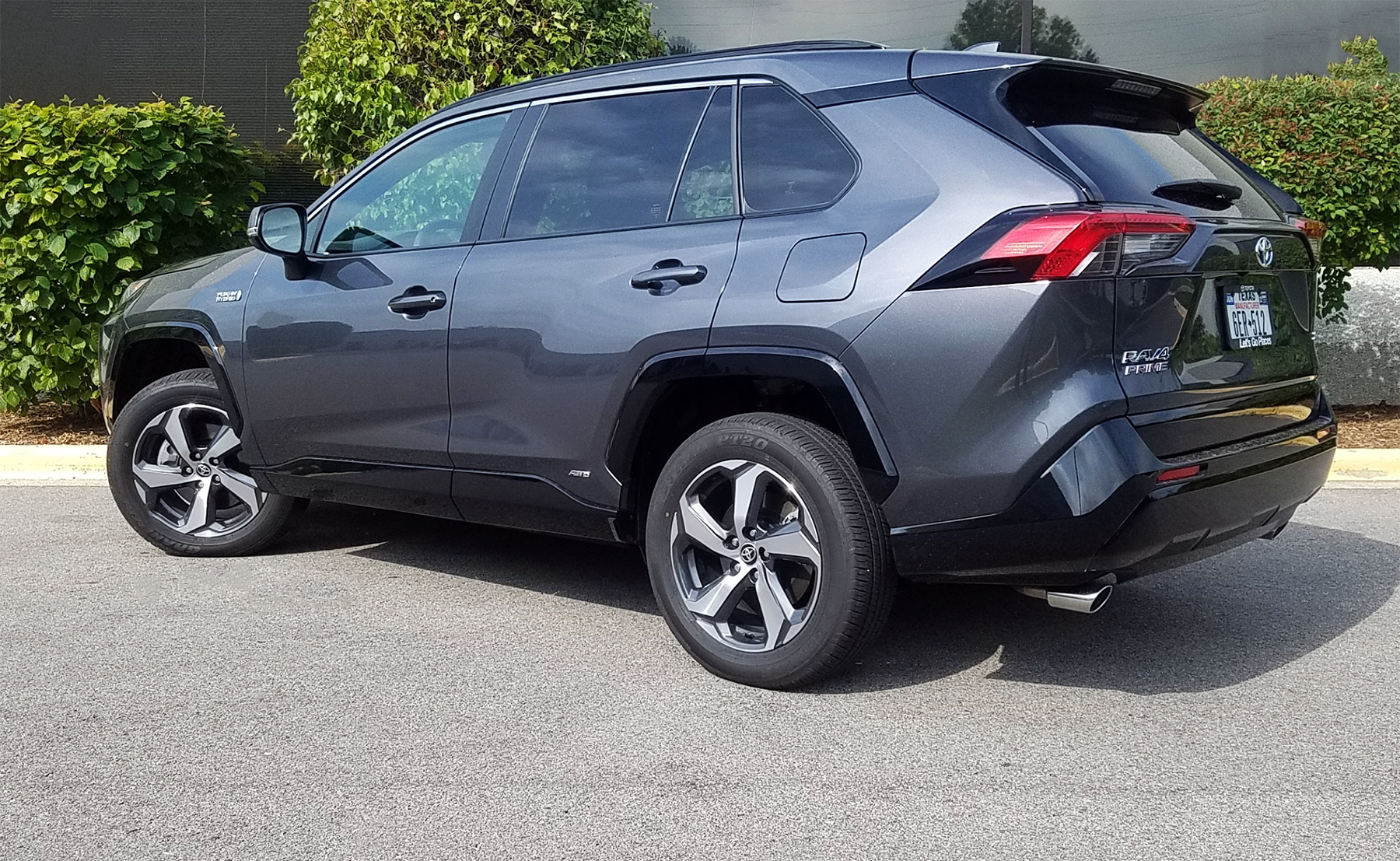 The plug-in-hybrid Prime is a new addition to the RAV4 lineup for 2021. It boasts an EPA-estimated pure-electric driving range of 42 miles, and comes standard with all-wheel drive.

This deeper shade of the color is the environmental kind. The RAV4 Prime has an EPA-estimated 94 MPGe fuel-economy rating and 42-mile range of all-electric operation. And there’s even a streak of green flag running through the Prime’s metaphorical color palette. At 302 system horsepower, it is the most powerful and quickest RAV4 ever with, Toyota says, the ability to hit 60 mph from a standstill in 5.7 seconds. In fact, Toyota is marketing the Prime as being as much of an upscale performance vehicle as one that’s “clean.”

Save for some handy hybrid-system readouts on the standard 8-inch touchscreen infotainment system, the RAV4 Prime’s control layout doesn’t really differ from the rest of the RAV4 lineup.

Under the Prime’s hood resides a uniquely tuned version of the conventional RAV4 Hybrid’s 2.5-liter 4-cylinder gas engine, paired with more-powerful electric motors. (The plug-in powerteam makes an additional 83 horsepower.) Power gets to the standard electronic on-demand all-wheel driveline via an electronically controlled continuously variable transmission with sequential shift mode. Drivers can select “Normal,” “Sport,” “ECO,” “Trail,” automatic EV/HV, or HV/EV charge-hold modes. The Prime power unit is nicely responsive running as an EV or conventional hybrid. However, as in a current-generation gas RAV4 that Consumer Guide has tested, Sport’s effect on driving behavior is hard to detect. Towing capacity is set at 2500 pounds. 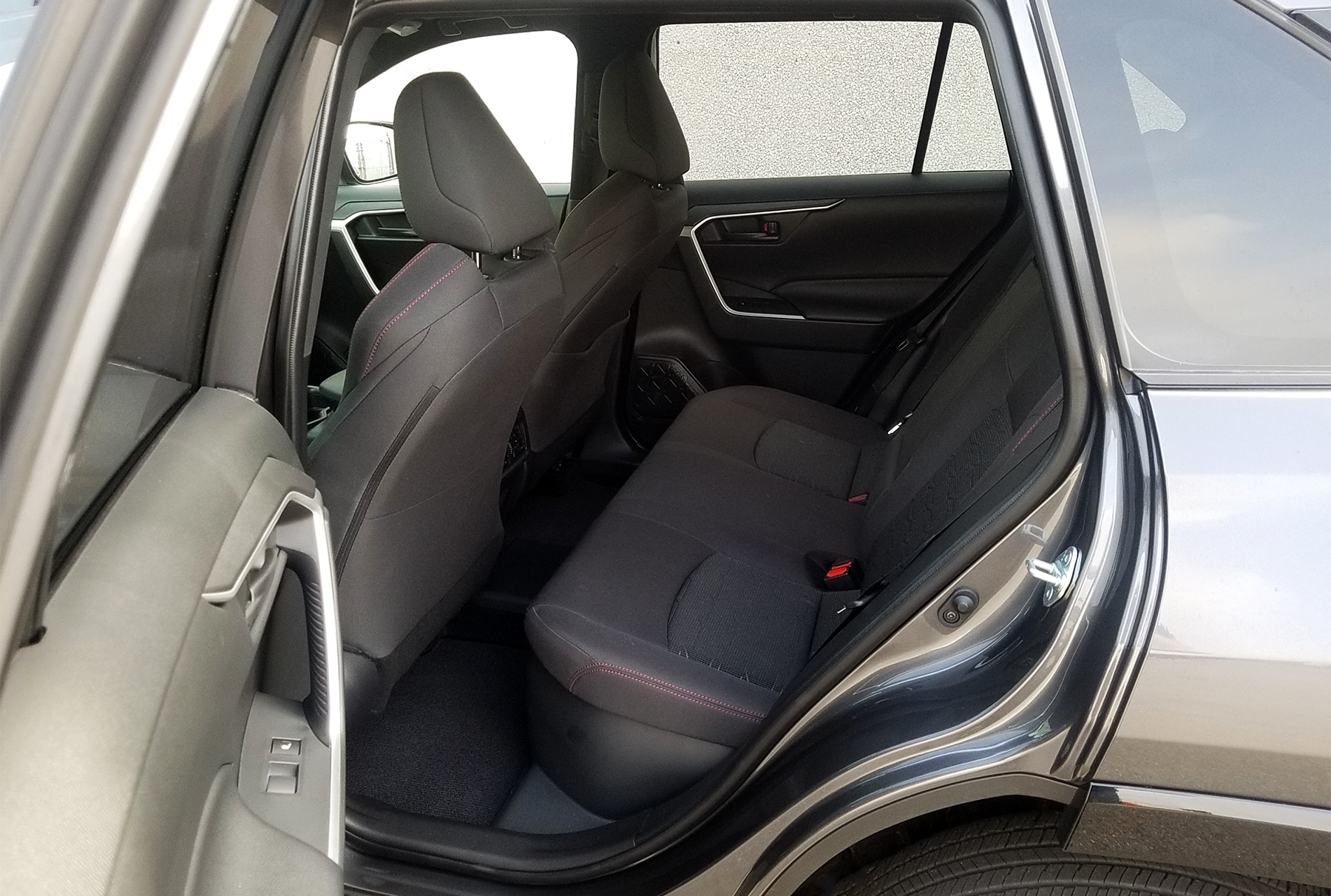 The RAV4’s rear-seat area is large enough for adults to ride in comfort.

Here’s one man’s experience with RAV4 Prime operation: I started with a full charge and 46 indicated miles of EV range. It was a hot late-summer day, but even with air conditioning on, only six indicated miles came off during an approximately 30-mile trip home—a little more than 50 percent of which was in expressway-type driving. Full EV capacity finally zeroed out the next day with the trip odometer at 68.5 miles, during a run dominated by freely moving Interstate traffic. Thanks to the assists of all-electric and conventional hybrid power, when I topped off at the end of my 167-mile test stint—40 percent in highway-style driving—gas mileage worked out to 83.5 mpg. (By the way, EPA fuel-economy estimates for conventional hybrid operation are 40 mpg in the city, 36 mpg on the highway, and 38 combined.)

The Prime comes with a power cord for home charging from 120- or 240-volt outlets. Toyota says that it should take 12 hours to attain a full charge at 120 volts, or as little as 2.5 hours using a 240-volt outlet.

2021 Toyota RAV4 Prime’s cargo volume is not significantly compromised by its hybrid-system hardware; with the optional moonroof, there’s 33.4 cubic feet of volume behind the rear seats, and 63.1 cu. ft. with the rear seats folded

The RAV4 Prime’s powertrain is a 2.5-liter 4-cylinder teamed with three electric motors, for a total system output of 302 horsepower–enough to enable a very respectable 0-60-mph run of 5.7 seconds, Toyota says. The fuel-filler door is on the driver’s side of the vehicle, while the battery’s charging port (shown here) is on the passenger side.

Ride from the specifically tuned suspension is firm but not harsh. Steering is responsive, and cornering lean is managed pretty well for a crossover SUV. Passengers enjoy a quiet cabin save for a number of odd but harmless little system sounds that pipe up at various times. Under regenerative braking there’s a better sense that the vehicle is stopping in relation to pedal effort, with less of that “hey, are these things working?” sensation so common to earlier hybrids. 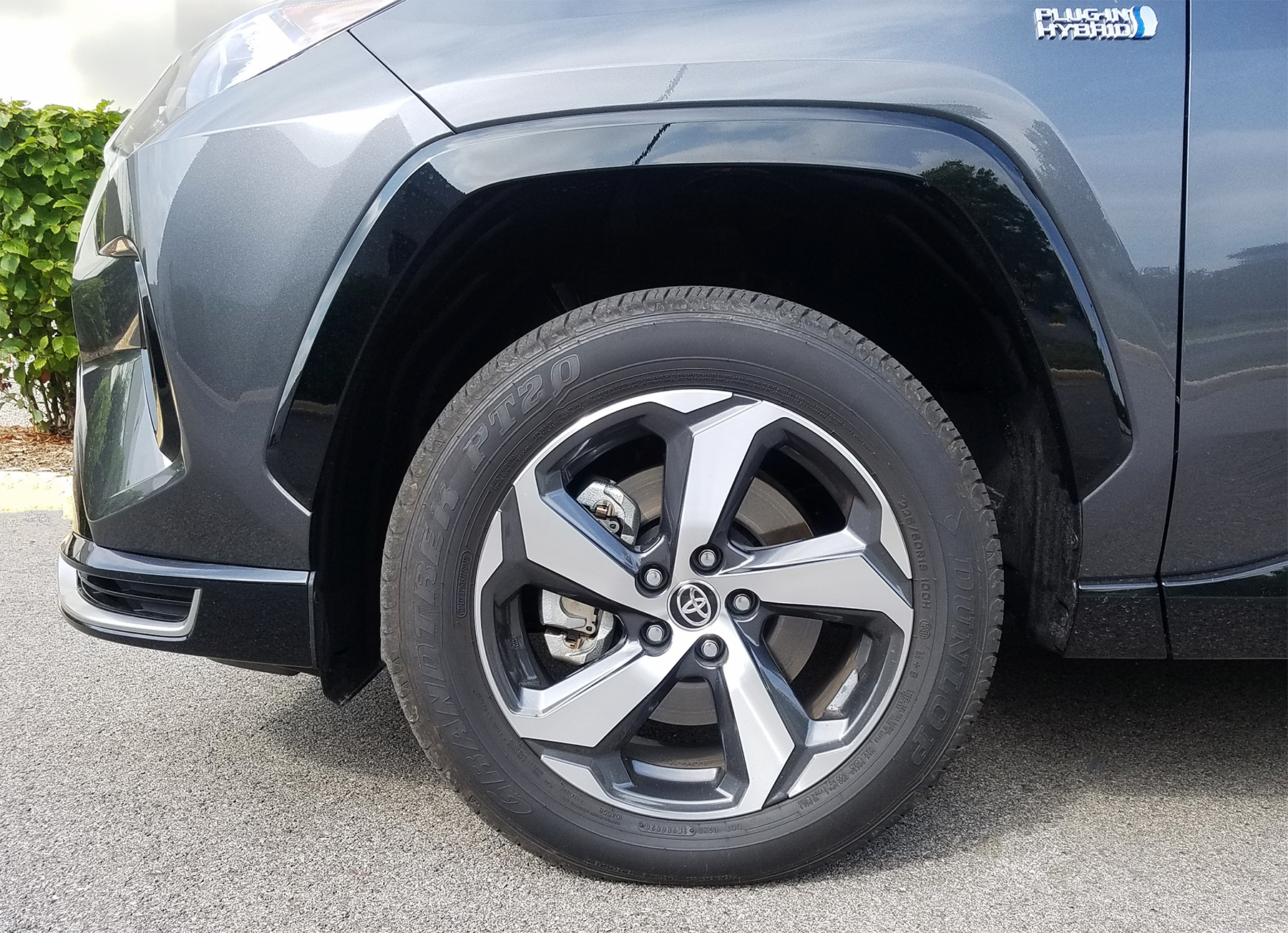 Eighteen-inch alloy wheels are standard on the Prime SE model; the step-up XSE models get 19s.

Compressible, soft surfaces are confined to the upper dash, door armrests, and console-box lid/armrest. Drivers do grip a leather-wrapped steering wheel and shifter knob. Elsewhere, though, there is lots of pretty mundane hard plastic. Red contrast stitching adds a touch of color on seats and other surfaces.

Driving controls include a digital speedometer and 7-inch vehicle-information display with, among other things, hybrid-system function monitoring. Audio presets are easy to program on the touchscreen (physical tuning knobs are a help), and climate controls have handy rotary knobs to set temperatures but repetitive-push buttons to select fan speed and mode.

Space for passengers and cargo is on par with that of any other RAV4. Headroom seems better in the second row than in front, but pleasing levels of legroom are available in both. A minimal floor hump improves the chances of getting three people—perhaps even a trio trim-of-build adults—in the rear seat. Personal-item storage falls to a good-sized glove box, a tray across the dash, small console box, short pockets in the front doors, and a storage pouch on the back of the front passenger seat. Exposed cup holders are in the console and pull-down rear armrest; all doors incorporate bottle holders. Cargo space on the flat load floor is good. The 60/40-split rear seats fold almost flat to greatly expand capacity. With rear seats down, the car had plenty of room for a repaired window screen that was more than five feet long.

The ’21 RAV4 Prime comes in six solid colors and five 2-tones. Not one of them is a green. Maybe Toyota felt that would be too on the nose. 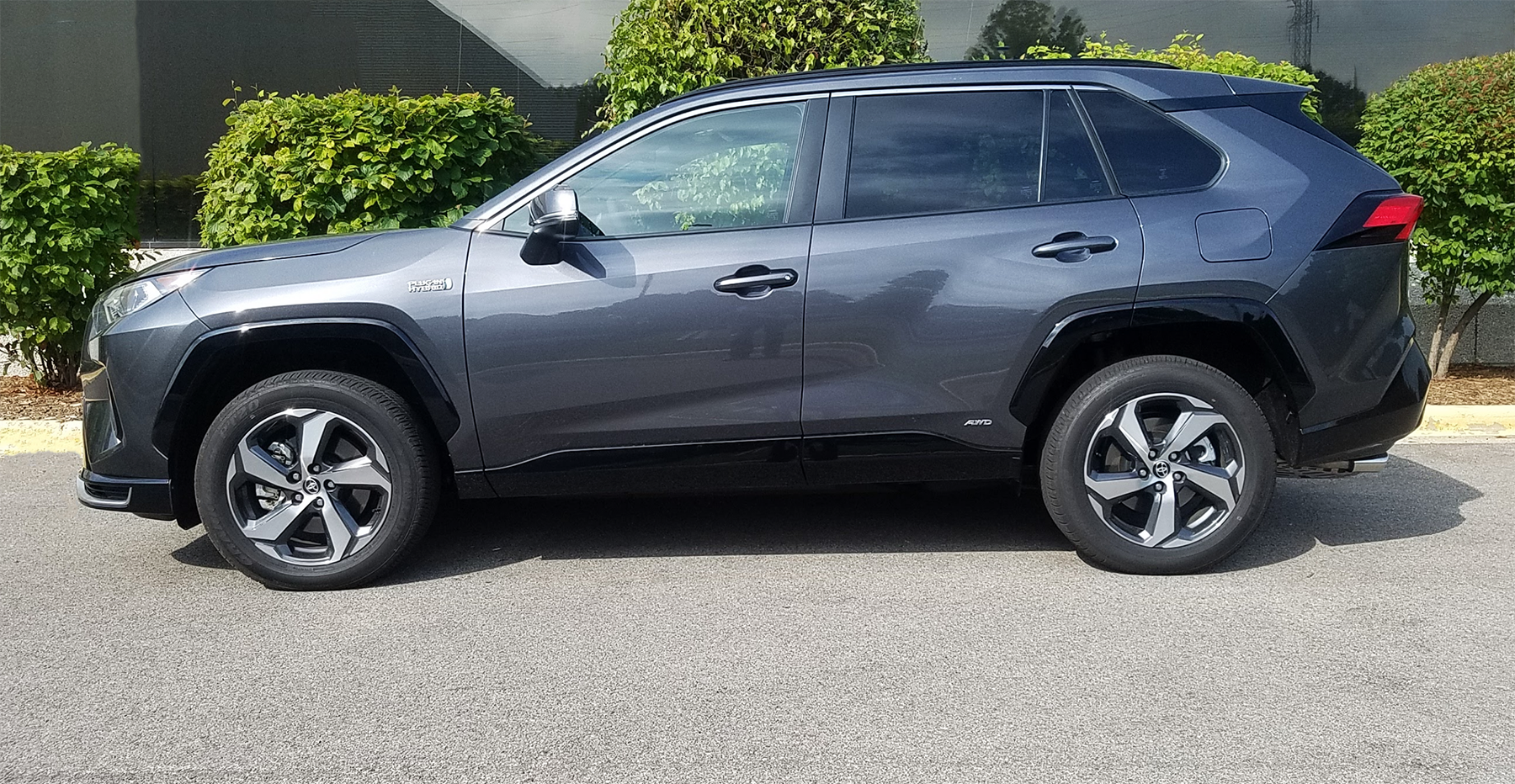 Toyota’s latest “green machine” variant of its RAV4 compact SUV offers a hint of “mean machine” too, thanks to its surprisingly zippy 302-hp powertrain. You’ll pay a premium over a comparably equipped regular RAV4, but you may be eligible for tax credits, and you’ll save plenty on gas as well. 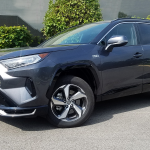 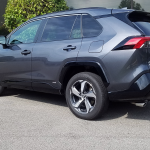 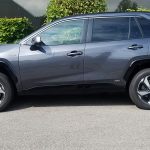 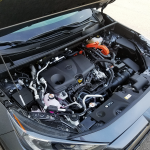 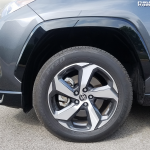 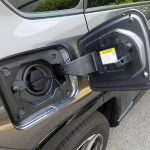 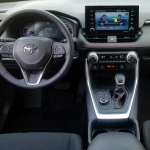 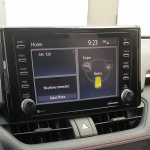 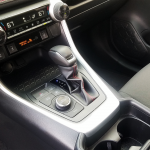 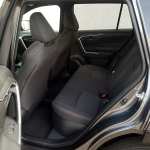 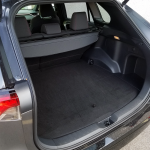 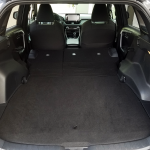