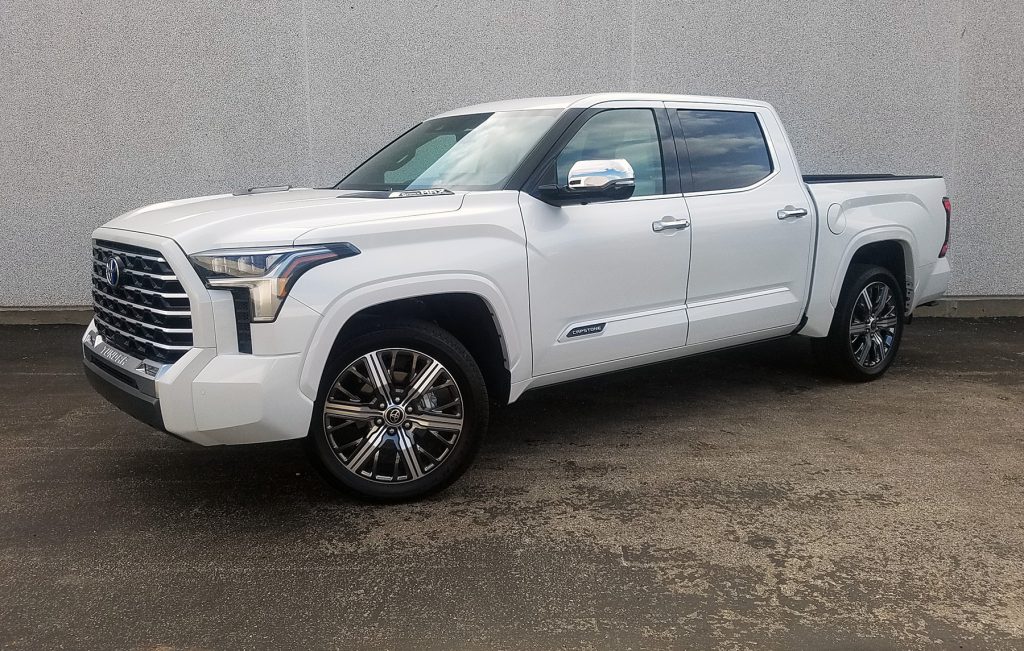 Here’s something we haven’t been able to say for some time: Toyota has redesigned its Tundra pickup truck.

How long has it been? It was three presidential administrations ago. Twitter was just months old. The “Great Recession” hadn’t happened yet. The year was 2007.

The third generation of Toyota’s full-size pickup bows for 2022 with a new twin-turbocharged V6—including a hybrid version—a 10-speed automatic transmission, a different suspension, and tech/infotainment improvements. It also boasts a new premium trim level called Capstone that Consumer Guide was able to sample in preproduction form. 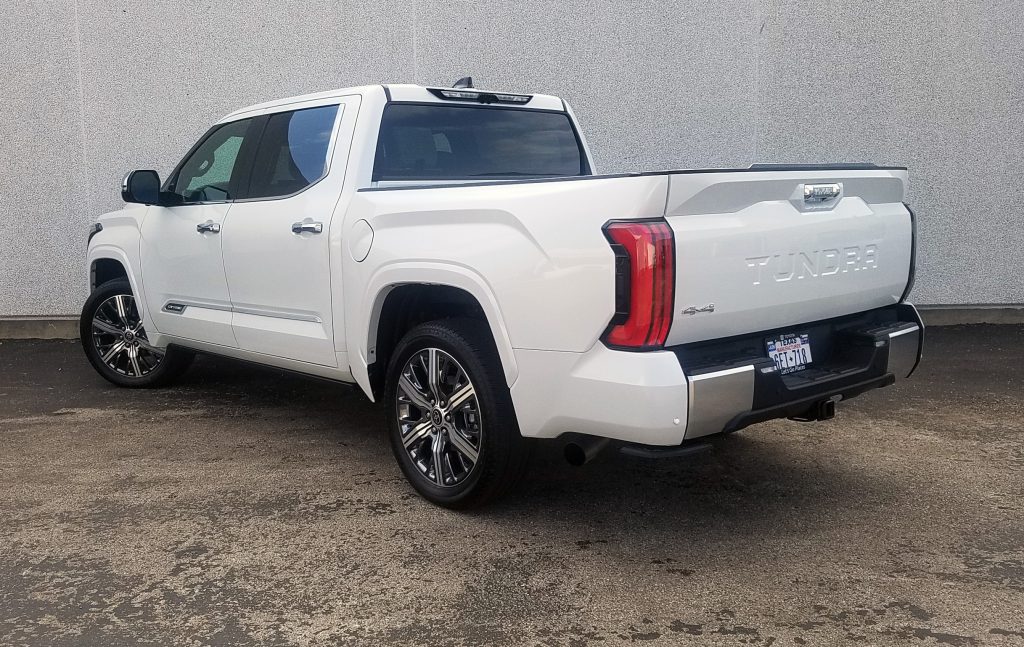 Toyota’s full-size pickup is redesigned from the ground up for 2022, gaining an all-new frame with new front and rear suspension, provocative new styling, lots of new technology features, and a new top-line luxury trim named Capstone.

Though Toyota isn’t groom to as diverse a stable of big trucks as its American-brand competitors, it does list the Tundra in seven trims. The gas version of the V6 comes in two power ratings. Depending on the model, two cab configurations, three bed lengths, and the choice of rear- or 4-wheel drive are on offer. However, the Capstone ($75,225 with delivery to start) narrows these choices. It is a hybrid-powered 4×4 “CrewMax” crew cab with the shortest available cargo bed of 5.5 feet—take it or leave it. It’s also about as complete as any Tundra primarily for on-road use can be. There is but one option package comprised of load-levelling rear air suspension and adaptive variable dampers, and only expandable trailering mirrors as a stand-alone extra. Pick a premium paint color like the Wind Chill Pearl that was on CG’s test truck, and you can’t spend any more.

Capstone standard features that are either exclusive to it or available optionally on lesser models are found throughout. It puts its own stamp on Tundra’s hulking, new exterior styling with a unique mesh grille and 22-inch machined-finish alloy wheels, both with a dark-chrome tint. Tires are all-season 265/50R22s. Power-deployed running boards and a left-rear cargo-bed assist step that appears from under the bumper at the press of a button in the taillight assembly ease access to the cabin and bed. The interior is a white-and-black affair with semi-aniline-leather-trimmed seats with 10-way power adjustment in both front positions and dark American walnut woodgrain accents on the dash, console, and doors. Toyota throws in a 10-inch color head-up display and acoustic-laminated glass for the windshield and side windows. 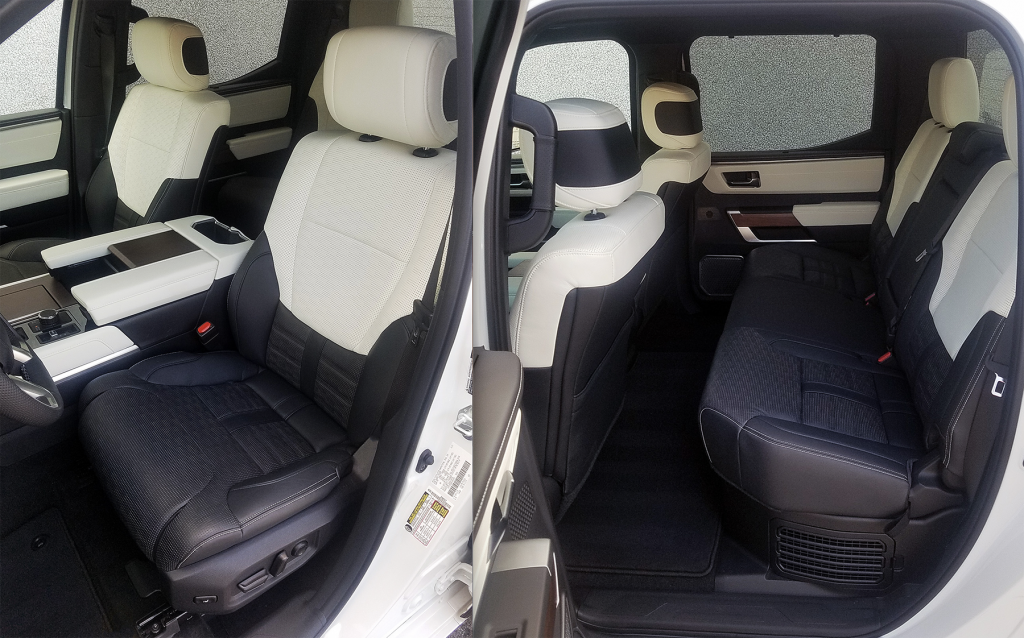 Alone among the full-sized pickups, the Tundra no longer comes with a V8 engine, preferring to rely on the 3.5-liter twin-turbo V6 for all its needs. Like only the Ford F-150, it has a full hybrid version. The i-FORCE Max, as Toyota calls the gas/electric powerplant, puts out 437 horsepower at 5200 rpm and 583 lb-ft of torque at 2400 rpm. (It’s slightly more powerful than the F-150 hybrid but lags in estimated fuel economy.) Though some new Tundra models can tow up to 12,000 pounds, our Capstone tester with the i-FORCE Max was rated for 10,340 pounds. 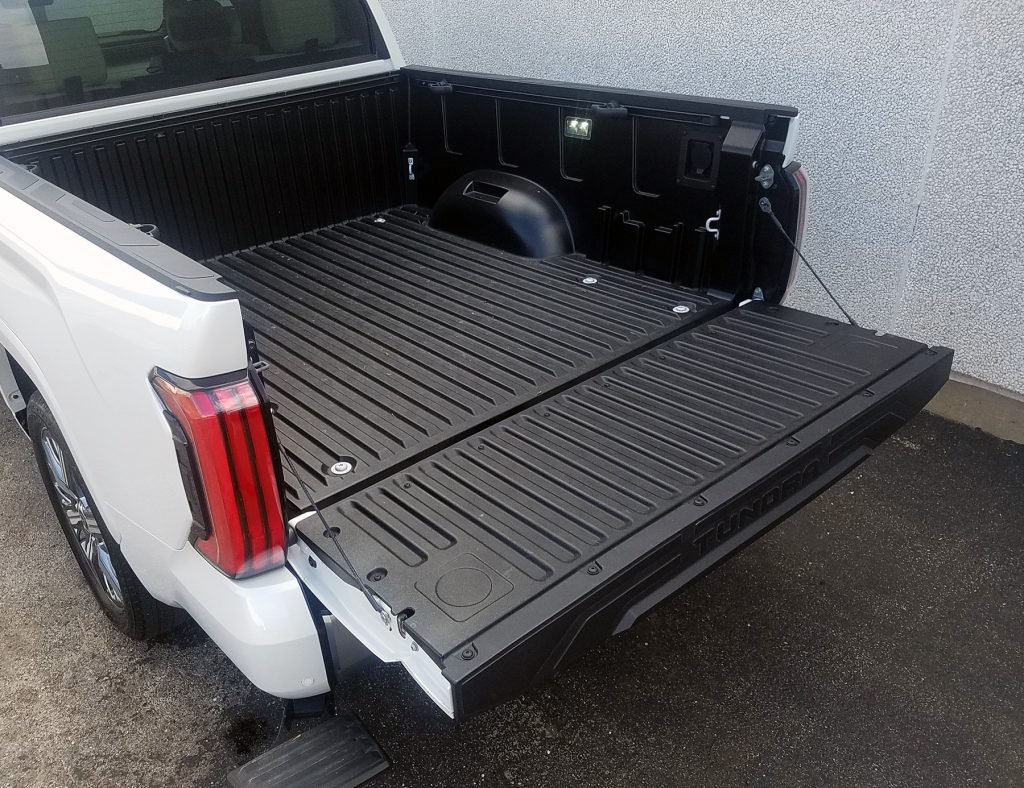 While not in the same league with some of the V8s on the market, the Tundra engine still feels strong, smooth, and eager. Transitions between electric-only power and gas operation—the handoff comes at 18 mph—are almost undetectable and the 10-speed trans, with overdrive ratios on the top three gears, goes about business without calling attention to itself. Selectable “Eco,” “Normal,” and “Sport” driving modes are standard but CG’s test truck had the optional version with added “Comfort,” “Sport S+,” and “Custom” settings. Eco and Sport make changes to engine performance; Comfort softens the ride; and Sport S+ modifies engine, damping, and steering—though not to any very great degree in any of these modes. A driver could select Normal and be happy with it day in and day out. EPA estimates for Capstone fuel economy are 19 mpg in city driving, 22 mpg in highway use, and 21 combined. However, this driver logged just 16.1 mpg after covering 117 miles composed of 82 percent city-type operation. 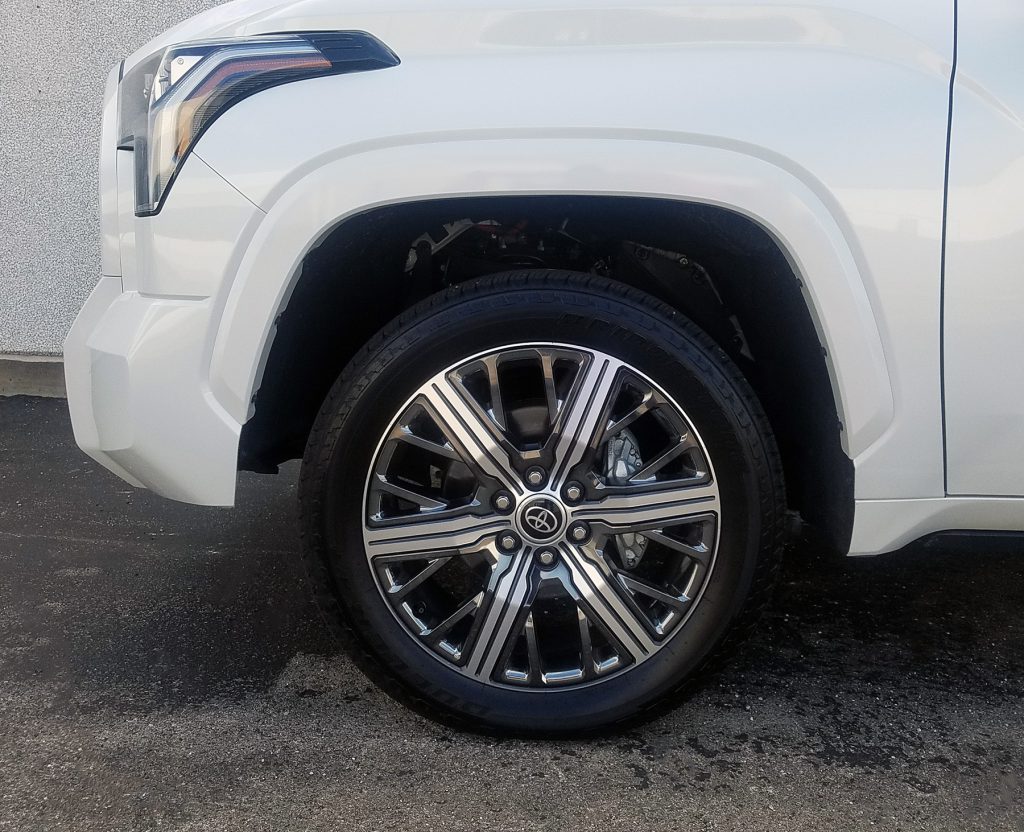 These flashy 22-inch wheels are exclusive to the Capstone trim level.

A redesigned frame, now with boxed side rails and beefier cross members, hosts a new multilink coil-spring rear suspension that replaces the former leaf-spring configuration. On-road ride is genuinely comfortable and better than in the old Tundra but still a little more “active” without a load than in the best of the domestic-brand trucks.

Cargo beds are made of aluminum-reinforced sheet-molded composite that’s rust and dent resistant. The usual modern pickup amenities—adjustable tie-down cleats, lighting, soft-release tailgate, 120-volt power outlet—are included but there are none of the interesting bed-storage or tailgate innovations found in other brands.

The interior is highlighted by the new Toyota Audio Multimedia infotainment system, which includes wireless Apple CarPlay/Android Auto connectivity. As the top-end model, the Capstone has the system’s available 12.3-inch digital gauge display and 14-inch infotainment touchscreen. The big screen’s layout initially befuddled this reviewer when attempting audio inputs, but he soon figured it out. The screen makes a helpfully large “canvas” for the navigation system (with over-the-air update capability) and the 360-degree camera display. Dual-zone climate control is done via a bank of buttons, including repetitive-push temperature and fan-speed settings. All Tundras include the Toyota Safety Sense 2.5 suite: pre-collision system with pedestrian detection, dynamic radar cruise control, lane-departure alert, lane-tracing assist, automatic high-beam headlamps, and rear-seat reminder. Capstones also have blind-spot and rear cross-traffic monitoring.

Also among the Capstone’s exclusive trim touches are subtle badges on the front doors. Tundras with the hybrid powertrain wear i-FORCE Max badges that are integrated into dual hood bulges.

Both rows of the top model’s heated and ventilated seats are comfortable, and soft-surface areas are evident throughout the interior—though all that white trim on doors, dash, and console may not look so great after the first camping trip or youth soccer game. Despite having the electric-motor battery beneath the rear seat, hybrid-powered Tundras have the same head- and legroom as gas-engine jobs. Space is abundant in both rows, but the rear seat isn’t quite as roomy across as in some large crew-cab pickups and headroom isn’t as good either, thanks in part to the Capstone’s standard panoramic sunroof. Personal-item storage choices are generous. Driver sightlines around the cabin aren’t bad but the hood “epaulets” that announce the i-FORCE Max impinge on road view.

Certainly, Toyota has made an already-good truck much better. It’s about time. 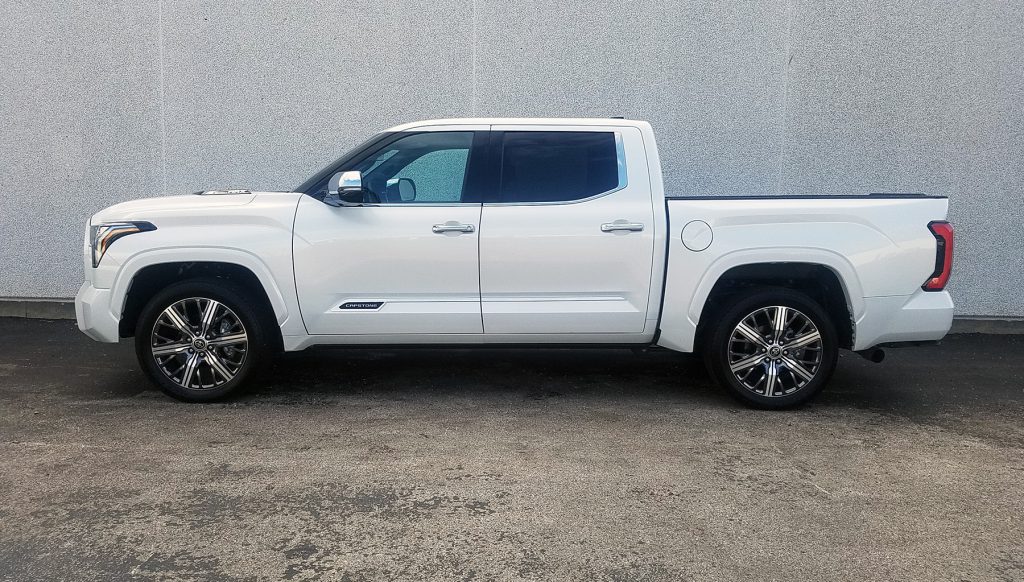 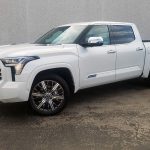 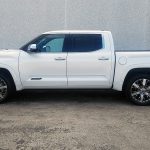 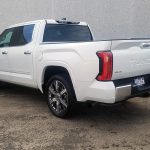 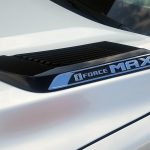 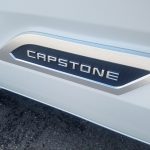 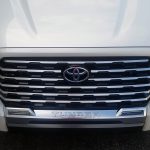 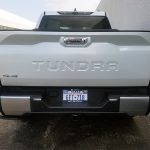 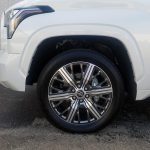 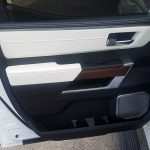 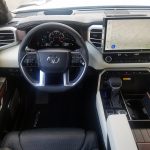 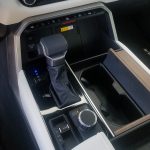 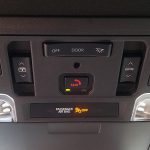 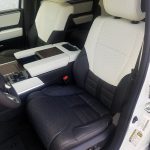 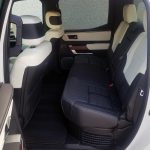 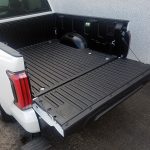 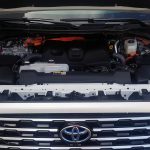