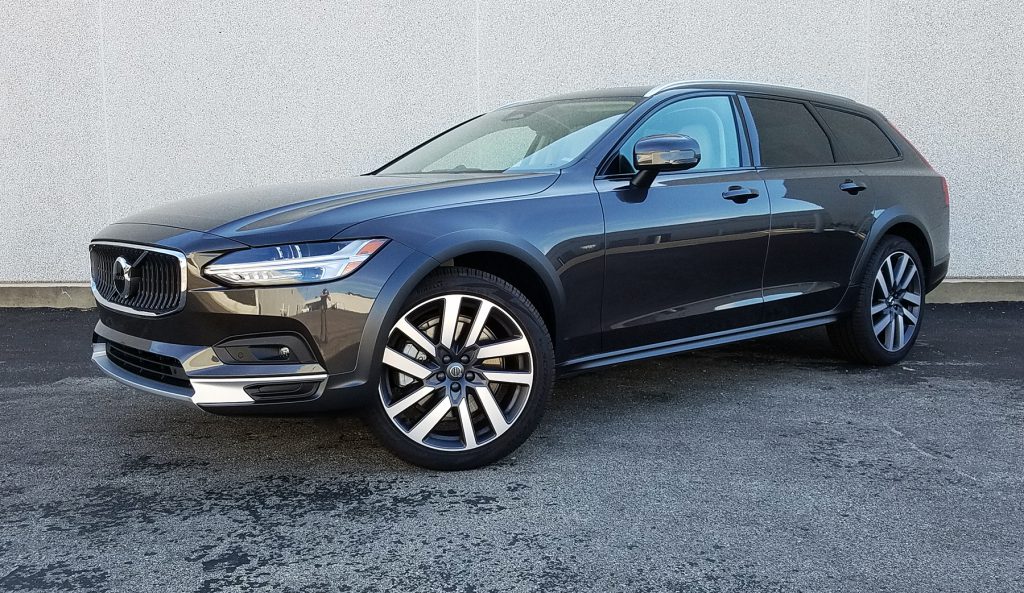 The not so good: Some class rivals offer more cargo space; infotainment-system quirks

The Volvo crowd has long been something of a station wagon crowd, the brand extolling its focus on safety, and that being a key selling point to families—which just happen to be the prime demographic for wagons. These days, though, Volvo’s wagons are themselves a thinning crowd. 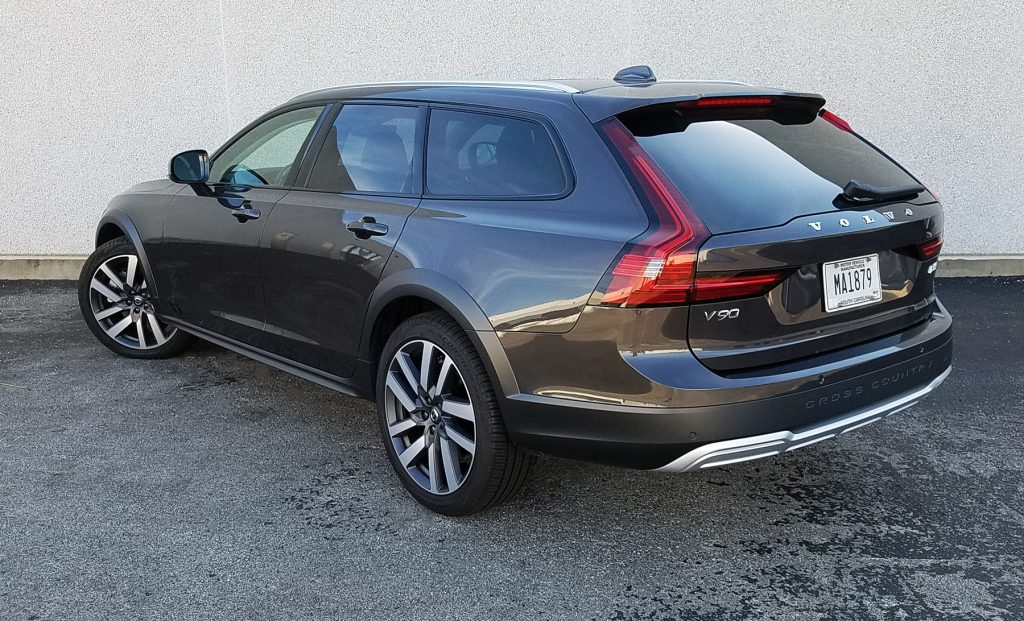 The current generation of Volvo’s V90 wagon debuted for the 2017 model year. For 2022, the V90 lineup is pared down to only the SUV-flavored Cross Country model, which receives an updated powertrain and a new infotainment system.

Thank—or blame—SUVS for overshadowing the passenger-car-derived station wagon but the contraction in sales has virtually wiped out the body style. The few survivors have taken to trying on a pseudo off-roader look. For 2022 Volvo still makes two wagons, the V60 and V90, but the V90 now comes only as a Cross Country version with a raised ride height and protective black cladding around the wheel openings and lower body. The “standard-height” V90 models minus the cladding have been discontinued.

Consumer Guide tested a V90 Cross Country, the larger of the two Volvo wagons (though both are considered part of the premium-midsize class). For ’22 the car switches to a mild-hybrid powerplant and gets a new infotainment system.

Interior ambiance is a Volvo strong point. The V90 Cross Country’s cabin boasts a genuinely luxurious look and feel. The center console is home to an unconventional twist-knob engine start/stop switch and a wireless charging pad.

The V90 occupies the most populous price/size segment in what’s left of the station wagon field. In addition to its slightly smaller kinswagon, it also vies for shoppers’ attention with the costlier Audi A6 allroad and Mercedes-Benz E450 All-Terrain. The base price, with delivery, of the V90 Cross Country is $56,295; even with a quartet of options CG’s test car came in at $61,990, well below the $69,450 starting price of the E450 All-Terrain our editors drove previously.

Where the Audi and M-B are 6-cylinder cars, the Volvo utilizes a 2.0-liter four that is supercharged and turbocharged and newly tended by a 48-volt electrical system with an electric starter-generator. Dubbed the B6, its electrically run supercharger adds boost to the engine at lower rpm until the turbo assumes this task at a higher rate of revolutions. At 295 horsepower, the B6 is down 21 ponies from the similarly aspirated T6 engine that preceded it. (Both of its German rivals generate well more than 300 horsepower.) That said, one of the several duties of the starter-generator—which replaces a conventional starter motor—is to hasten delivery of the 310 lb-ft of torque for zestier starts and smoother shifts from the 8-speed automatic transmission. The engine in the V90 is responsive and smooth, flashing good power for standing-start getaways and nice punch for highway passing. 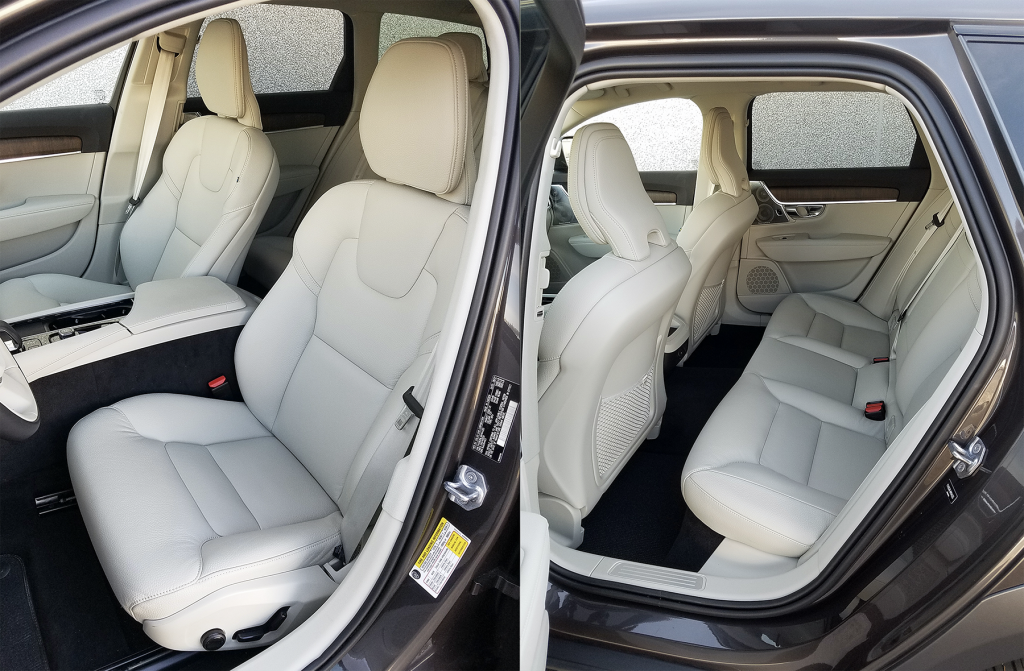 There’s good space for most adults in both the first and second rows, and the seats are comfortable and supportive.

It wouldn’t be unreasonable to expect that a benefit of the B6 four would be better gas mileage than its more powerful competitors, and going by EPA estimates that’s true. The V90 Cross Country is rated at 22 mpg in the city, 29 on the highway, and 25 combined—all of which are one mpg better than the respective estimates for the All-Terrain and two mpg above the allroad’s combined figure. However, when this driver put 77 miles on the test car with 61 percent of that in city-style use, he didn’t quite hit the city number, logging 21.5 mpg. The erstwhile T6 engine was pegged at 21 city mpg but 32 on the highway.

No matter what kind of fuel mileage they’re getting, V90 passengers will be enjoying their trips in comfortable and tasteful surroundings. Seats are supportive and comfortable and are available in a choice of two no-cost color alternatives to the standard Black leather or four shades of ventilated Nappa leather offered in an extensive interior package. Front seats are heated and power adjustable, with memory function for the driver. Depending on the color selected, dash, doors, and console are dressed in real-wood accents of either gray ash or pitched oak. Padded, soft-to-the-touch areas are abundantly distributed. The steering wheel is wrapped in leather and cars like CG’s tester with the Blond interior have this off-white color on the inside half of the wheel.

The V90 Cross Country’s cargo volume checks in at 25.2 cubic feet behind the rear seats, and 53.9 cubic feet with the rear seats folded–respectable, but behind its primary class competitors.

There’s plentiful stretch-out room and good headroom in front. Rear-seat legroom is sufficient to accommodate lots of adults, though you won’t get more than two of them in this 5-passenger car because the driveline hump in the floor is fairly substantial. Even with the standard panoramic moonroof overhead, rear-seaters won’t feel crowded for headroom. Personal-item storage is handled by a large glovebox, small console box, modest door pockets, mesh pouches on the backs of the front seats, and a shallow covered bin in the pull-down rear armrest.

Drivers face a 12-inch digital display (with configurable functions via steering-wheel buttons). The new Google-based infotainment system has a touchscreen that is smaller and somewhat easier to navigate than the former Sensus Connect system had but it still requires some concentration to work through menus. Management of the standard two-zone climate system is also via the screen, but there are quick-hit buttons for defrosters and an audio power/volume dial below the screen. Satellite radio and Apple CarPlay/Android Auto phone mirroring are included. However, CG editors with both types of phones reported difficulty maintaining a Bluetooth connection.

The V90 Cross Country’s sole powertrain is a turbocharged and supercharged 2.0-liter 4-cylinder that is newly paired with a 48-volt mild-hybrid system. Our tester was equipped with the optional 20-inch alloys in place of the standard 19s.

At 115.8 inches, the V90’s wheelbase is 0.1 inch longer than the stretch under the E450 All-Terrain. Ride on the double-wishbone front suspension and rear integral-link suspension with composite transverse leaf spring is comfortably composed, even on the optional 20-inch alloy wheels.

The V90 isn’t as roomy for cargo as the Mercedes. Maximum cargo capacity with the 60/40-split rear seats down is 53.9 cubic feet; the All-Terrain holds up to 64 cubic feet. The cant of the Volvo’s tailgate plays a part here. The rear seats do fold flat and flush with the load floor.

Power and cargo room aren’t the only advantages that come for the All-Terrain’s extra cost. For instance, it has 4-wheel air suspension, one additional transmission gear, and a rear-facing two-passenger seat for 7-passenger capacity. But considering what the V90 Cross Country does offer for its price it should draw a crowd.

The 2022 Volvo V90 Cross Country stands out from the run-of-the-mill luxury SUV by offering handsome station wagon proportions in addition to its upscale trim and rough-terrain/inclement weather capabilities. 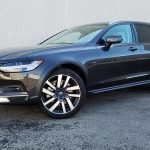 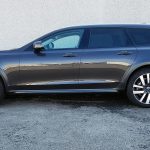 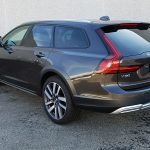 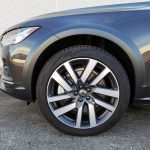 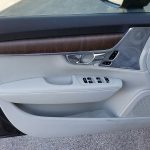 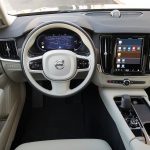 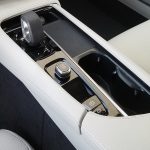 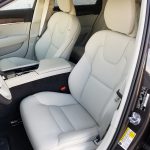 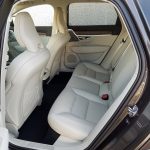 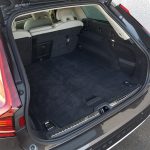 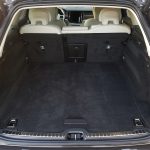 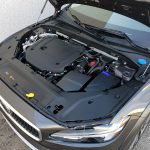