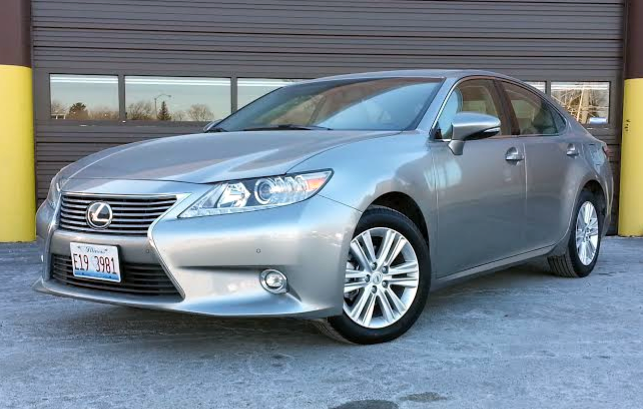 Consumer Guide’s test Lexus ES 350 arrived with a healthy list of options. Including destination charge, our test car came to $44,145.

The not so good: Fuel economy somewhat disappointing

Having driven a stream of Lexuses lately that were either high-performance “F” models or optioned with F Sport packages, you couldn’t blame us at Consumer Guide® for wondering if Toyota’s luxury brand still makes “regular” cars. 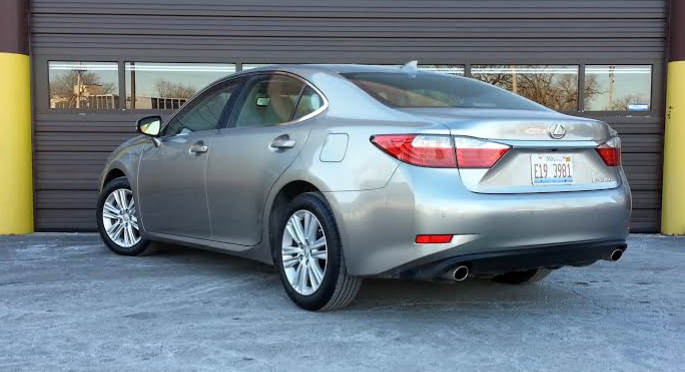 These 17-inch wheels shod with all-season tires are standard on all ES models. Bright-finish 17- and 18-inch wheels are also available.

It turns out Lexus does. The ES 350 that CG tested doesn’t have an F version or even an F Sport option. To get that in a Lexus that qualifies as a member of the premium-midsize class, you have to step up the GS 350. That leaves the ES to serve as a very likable and relatively affordable member of this crowded market segment that has its share of prestigious “wish-list” cars.

What the ES 350 does deliver for its $37,550 starting price—which is a good 10 grand less than a similarly equipped GS 350—is generous passenger room, a smooth ride, and a silky powertrain. 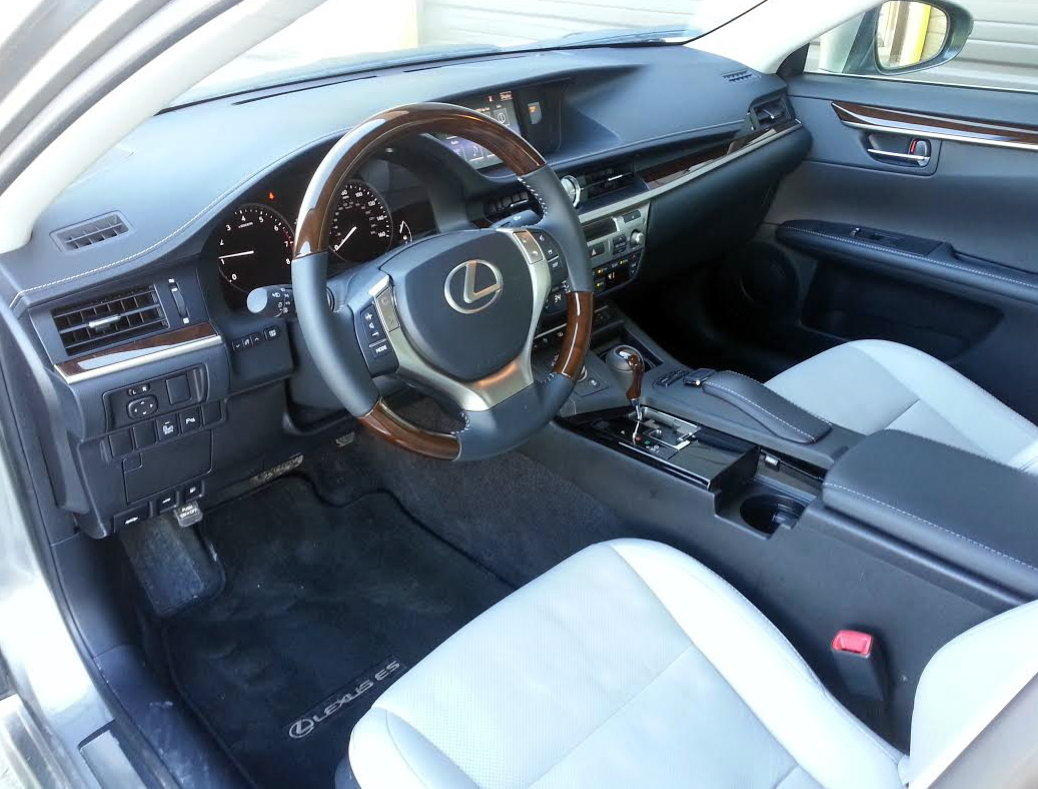 Front leg- and headroom are ample on seats that are comfortable and offer good support. Better yet is a very spacious back seat with lots of legroom, slightly less headroom than in front, and space for an adult middle passenger if the situation arises.

Front storage consists of door pockets; a glove box that sees most of its space taken up by the owner’s manual; two covered cup holders in the console; and a large covered console box with an adjustable tray, a power point, and inputs for digital devices. Rear storage is handled by pouches on the front seat backs and two cup holders in the pull-down center arm rest. There is a 120V power port built into the back of the console near floor level.

Trunk space is plentiful—with a medium and a small travel bag in it there was plenty of room to spare—but a high lip can complicate loading/unloading. Rear seats don’t fold, but there is a pass-through for long objects.

Underhood is Lexus’s 3.5-liter dohc V6. In the ES, it makes 286 horsepower. Smooth and quiet, it delivers pleasing power from standing starts or during expressway cruising. The electronically controlled 6-speed automatic transmission stays in the background most of the time, but steps up under brisk acceleration to provide prompt kickdown for secure passing. 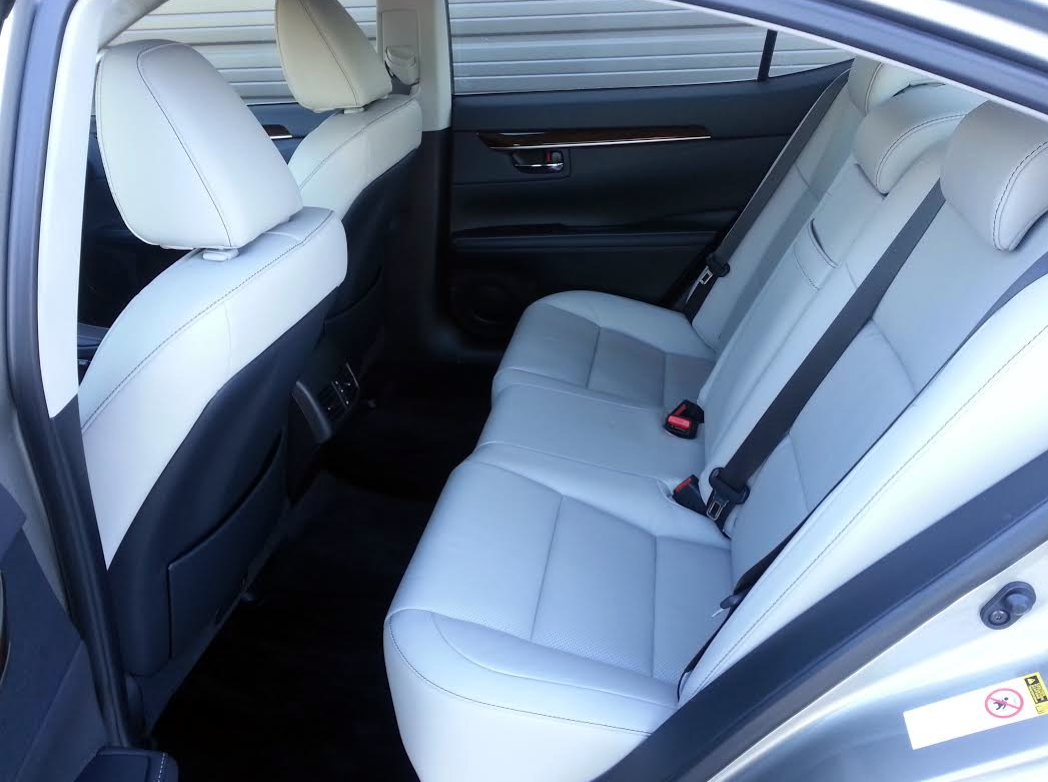 Most rear-seat passengers will find sufficient room to stretch out.

The standard Drive Mode Select system offers dial-activated “Eco” and “Sport” alternatives to the “Normal” setting. Eco moderates throttle response, power output, and climate settings in pursuit of increased fuel efficiency. Sport is calibrated for faster gear changes and a more aggressive throttle. This tester noticed an obvious change in the car’s behavior when it was set in Eco, but the difference between Normal and Sport operation seemed less distinct. With the car most often in Normal mode over 226.2 test miles (69 percent of them under city driving conditions), this driver averaged 20.38 mpg, which falls a little short of the ES 350’s EPA-estimated 21 mpg city rating.

Check out the entire 2015 Lexus lineup 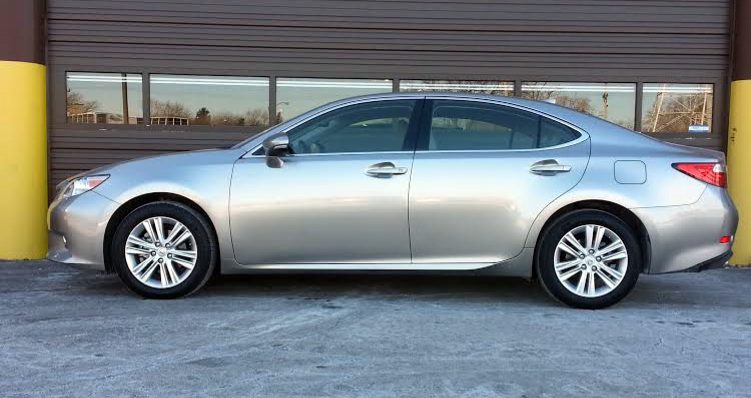 What this midsize luxury-brand car doesn’t deliver—unless you shell out extra—are things like perforated-leather seat upholstery and bird’s-eye maple highlights. Both were included in the Luxury Package that was added to CG’s test car. So was the optional navigation system with voice control, rearview camera, and Enform app suite among other features. The nav map appears on an 8-inch color screen that also serves as the display for the audio system. This is controlled by Lexus’s Remote Touch device to which this driver has become accustomed—but still doesn’t like so much for the attention it commands when it’s being used. While you’re fixating on this, at least you’ll be able to hear yourself think because the cabin environment is commendably quiet.

Soft-touch surfaces extend far down the dash and door panels, but the console is encased in the same hard plastic found near the bottom of the doors and dash. Driving controls are easy to see and use. Climate controls are adjusted via a limited array of buttons low on the dash, but can be reached quickly without distraction.

With the 2 big-ticket packages and several stand-alone luxury and technology options, the total tab for our test car (with delivery) jumped to $44,145. However, that turned it into a suitably luxurious car that would still undercut the cost of many competitors in its class. If at-the-limit performance isn’t on your checklist of luxury-car must-haves, the ES 350 might be an excellent value.