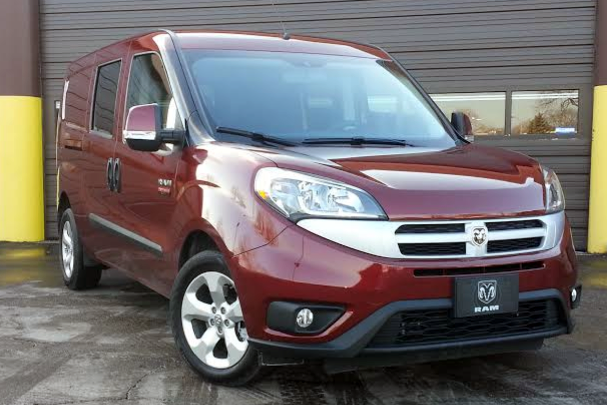 Consumer Guide’s test ProMaster City arrived in Wagon SLT trim. Including the destination charge and a few options, our test truck came to $28,820.

The great: Excellent use of space, surprising pep

The not so good: Touchy throttle, limited rear-seat knee room

Check out our Minivan Best Buys

Over the past few years, European-designed light-commercial vans have gradually taken over the American market. The Daimler-built Sprinter van (which has been branded as a Dodge, Freightliner, and Mercedes-Benz at various times) has been on sale in the U.S. since the early 2000s. Ford began bringing its compact Transit Connect vans to America for 2010, and finally phased out its long-running Econoline full-size van last year in favor of the “global-market” Ford Transit. And this year, the Ford Transit Connect gains some new competition: Meet the new-for-2015 Ram ProMaster City, which is essentially a restyled, North-American-market version of the Fiat Doblo. 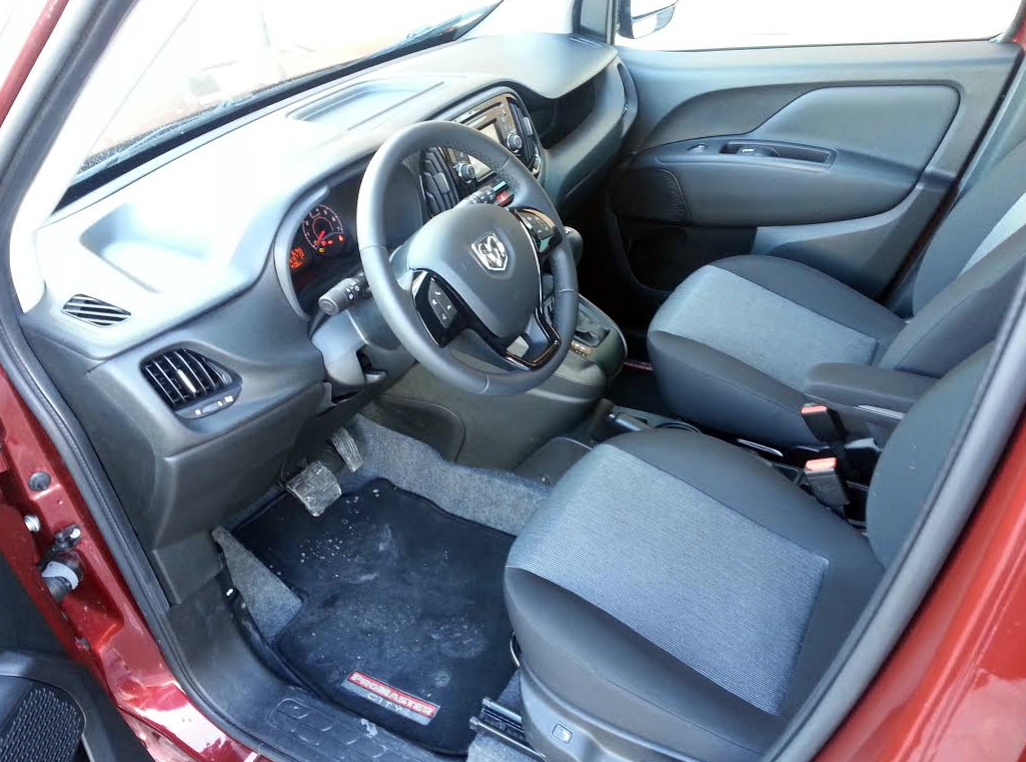 It’s easy to see the appeal of space-efficient, tall-body vans like the ProMaster City, Transit Connect, and Nissan NV200–they pack a lot of cargo-hauling versatility into a surprisingly compact footprint. The ProMaster City really isn’t designed as a “civilian” vehicle, but it is available as a passenger van with a second-row seat and side windows, in addition to the expected two-seat cargo-van version. Our test ProMaster City was a passenger van; I used it as a family hauler for my wife and two small boys, and darned if it didn’t do a surprisingly good job.

The tall body build provides fantastic headroom all-around; even NBA players will have noggin space to spare. However, the second-row seat unfortunately is positioned fairly far forward, so legroom grows tight when the front seats are more than halfway back. This wasn’t an issue with my car-seat-aged kids, but some adult passengers will feel a bit cramped. 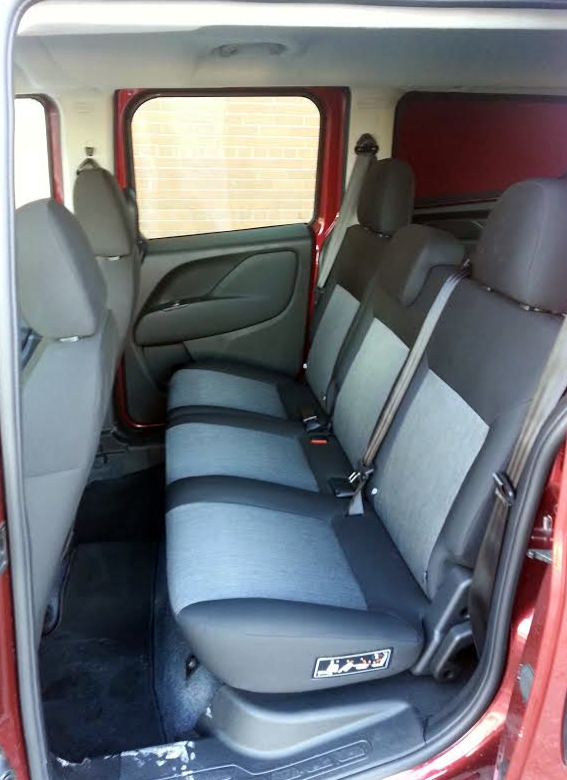 Naturally, the cargo space is outstanding for a vehicle this size. The load floor is nice and low, and the high ceiling means that tall and bulky items fit with no problem. The 60/40-split center-opening cargo doors are handy too… they lock open at 90 degrees, but a quick squeeze of a latch catch allows them to open a full 180 degrees. Small items storage is just OK, though the large, netted bin at the top of the windshield is a nice touch.

Though the ProMaster City feels decently refined for a commercial vehicle, the exposed steel in the cargo area is a reminder of its workhorse roots. The uncovered metal gives a rather “unfinished” look compared to a typical passenger vehicle and makes for a bit more ambient noise, though neither is particularly objectionable. The interior plastics themselves feel fairly budget grade, but they are on par with the typical subcompact hatchback car. The instrument panel is nicely laid out overall, but I wished for a larger screen for the rearview camera.

The vertical outer door handles are a bit of an annoyance. They’re not a big problem on the front doors, but they make the sliding side doors somewhat awkward to use. Instead of pulling the handle out and sideways in the same direction (as in most sliding doors), the vertical handle necessitates pulling up and sideways in an awkward motion. Also annoying is the ear-piercing volume of the seat-belt- and parking-assist warning beep… to spare my ears, I made sure to fasten my seat belt before turning on the ignition. 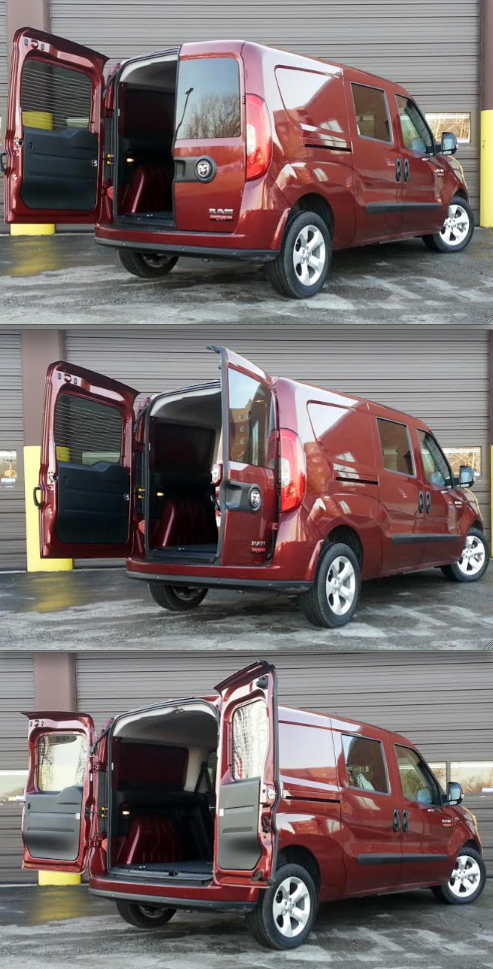 The 2.4-liter 4-cylinder engine provides surprisingly peppy acceleration… at least when not hauling heavy cargo. The throttle response is very snappy from a stop… almost too snappy. It takes a very gentle touch on the gas pedal to keep from lurching forward. This tuning is likely intentional; the touchy pedal should help keep the ProMaster City responsive when it’s loaded up with heavy cargo.

The ProMaster City’s sole transmission is a 9-speed automatic, and it’s one of the more stubborn transmissions I’ve driven recently. The frigid weather during my test period (the temperature topped out in the low teens) certainly had an effect. This gearbox felt like it had molasses for transmission fluid… gear changes were very sluggish and clunky, at least until the vehicle warmed up.

Still, this is an exceptionally tractable machine. The upright driving position and compact footprint make maneuvering in to tight quarters pretty easy, even if the turning radius is a bit wide. The ride is reasonably smooth, thanks in part to the independent rear suspension and the extra-long wheelbase.

It’s doubtful that many Ram ProMaster City vans will do soccer-mom duty, but they’re more capable in that role than you might expect.