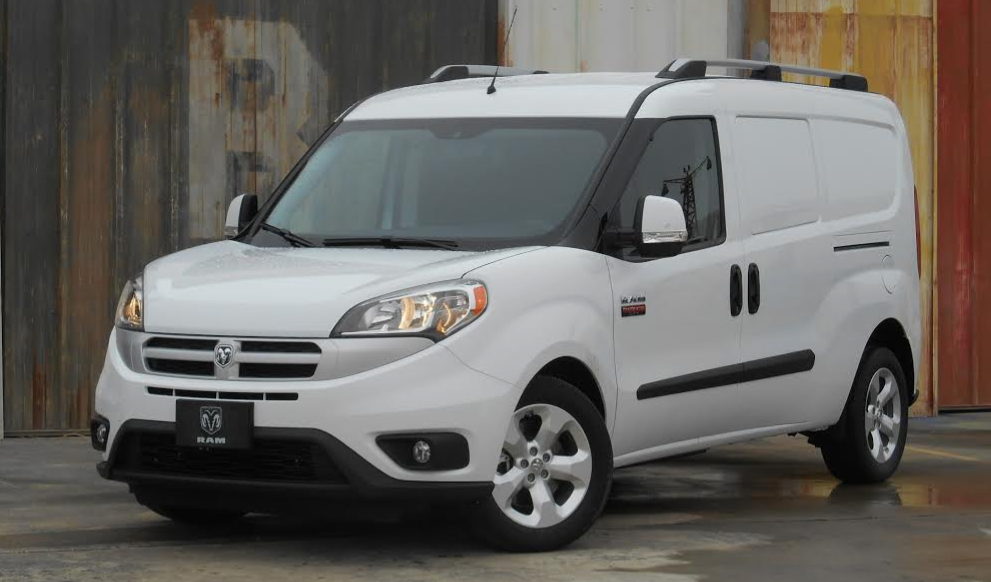 Cargo versions of the ProMaster City start at $24,125 including destination. Ram says they have best-in-class payload and cargo capacity.

For a class that didn’t even exist six years ago, compact cargo vans have witnessed an explosion in growth of late. And that applies not only to sales, but also to the number of entries.

When it arrived for 2010, the Ford Transit Connect reintroduced America to the idea of a compact van intended for cargo use. (Previously, some minivans—most notably the Chevrolet Astro—were offered in steel-sided cargo versions, but they had all disappeared by the 2006 model year.) While it was new here, Transit Connect had long been sold in Europe, where compact cargo vans have a lengthy history. Although a 5-seat passenger version of the Transit Connect was technically available, it saw extremely limited sales, as it really didn’t offer anything that wasn’t available elsewhere in a more practical form. 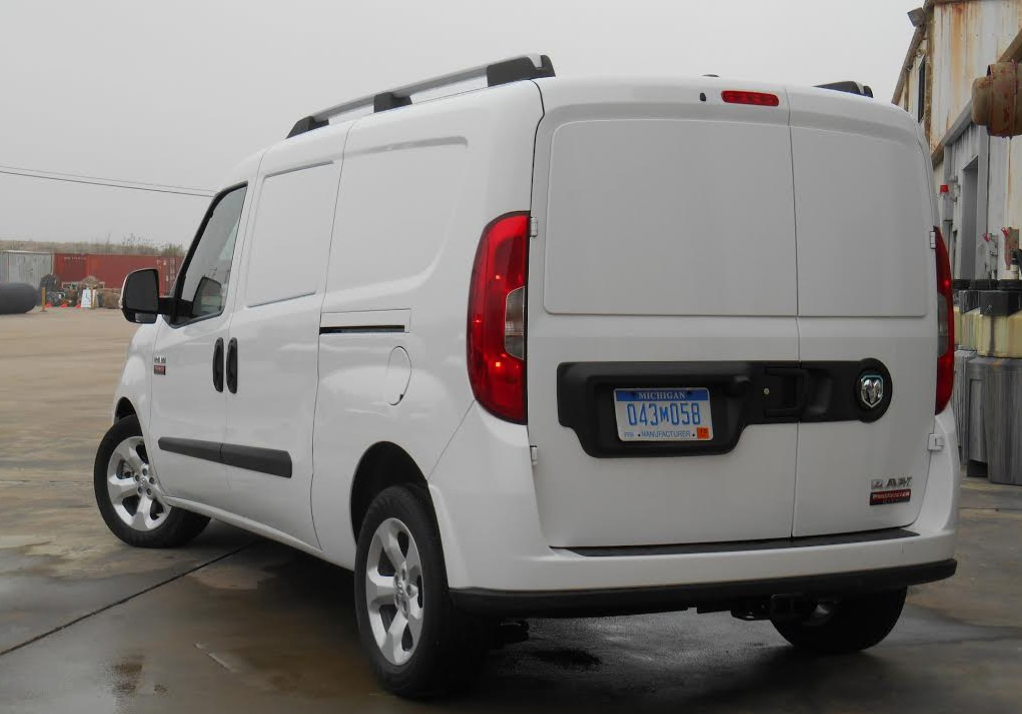 At 188 inches long, ProMaster City is 15 inches shorter than the Dodge Grand Caravan.

For a while, the Transit Connect had the class to itself. Its tall, boxy profile—usually playing billboard host to a company’s logo—made it stand out, and it quickly became a common sight in urban areas. Its success eventually led Ram to bring out a cargo version of the Dodge Grand Caravan minivan called the C/V, but it didn’t have near the impact—or the popularity.

Now, however, Ram is bringing out a more serious competitor. And it’s coming courtesy of Chrysler’s merger with Italian automaker Fiat. 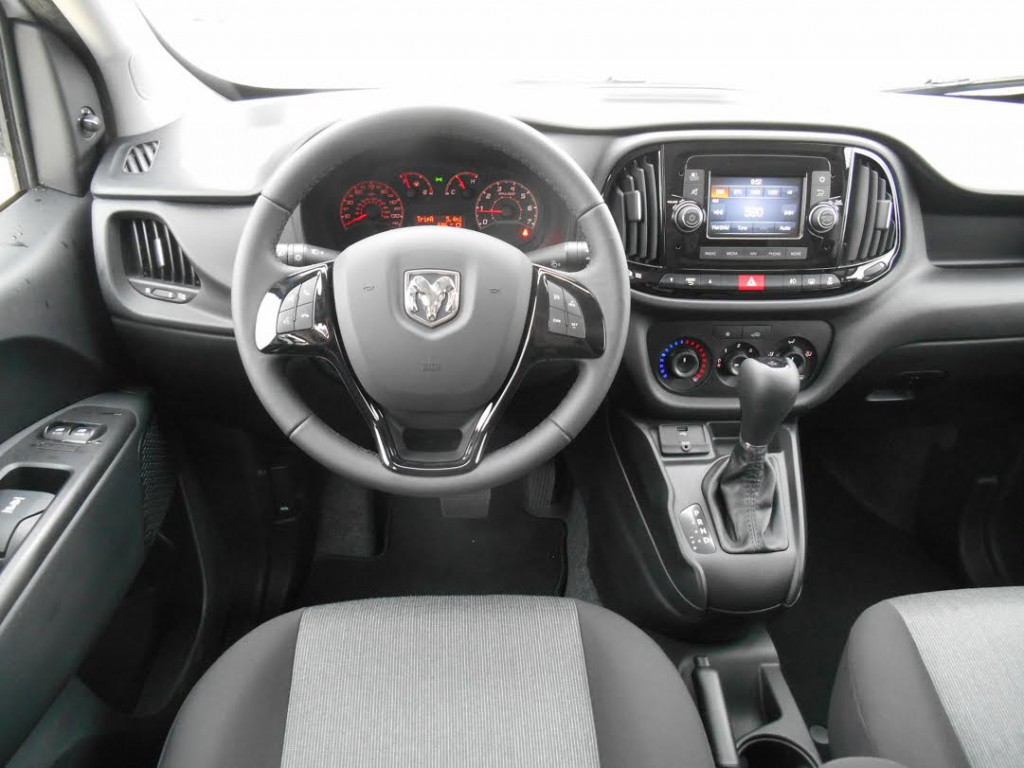 Though the dash is generally well laid out with numerous storage options, we found the ProMaster’s small speedometer (buried in the dark left corner of the instrument panel) difficult to read at a glance.

Although it received several notable changes to make it more appealing to an American audience, the ProMaster City is based on the long-running, front-wheel-drive Fiat Doblo. Chief among its alterations for the U.S. are a completely different powertrain, heavier-duty suspension, and unique styling touches.

Replacing Fiat-built 1.4-liter gas and 2.0-liter diesel engines is Chrysler’s “Tigershark” 2.4-liter four, which is currently offered in some Chrysler, Dodge, and Jeep vehicles. In this application, it makes 178 horsepower and 174 lb ft of torque, the latter of which Ram says is best in class. It’s mated to a 9-speed automatic transmission—also used in other applications—and the combination is good for EPA ratings of 21 city/29 highway, the latter also being what Ram says is best in class. Other best-in-class claims are the ProMaster’s 1883-lb payload rating, 131.7-cu-ft cargo capacity, and 48.4-inch span between the rear wheel wells. Towing capacity is 2000 lb.

Ram says the suspension was beefed up to withstand the tortures dished out by America’s rougher roads, and that results in a slightly higher ride height. Still, without a roof rack, the ProMaster City can easily fit through a typical garage-door opening. It probably could with the optional roof rack as well, but that would be worth checking with a tape measure if that’s important to you. As might be expected, the grille was revised to carry Ram styling themes—and a big Ram badge. Front fascias can either be black, or they can be body color with a silver grille (which looks significantly “dressier”). 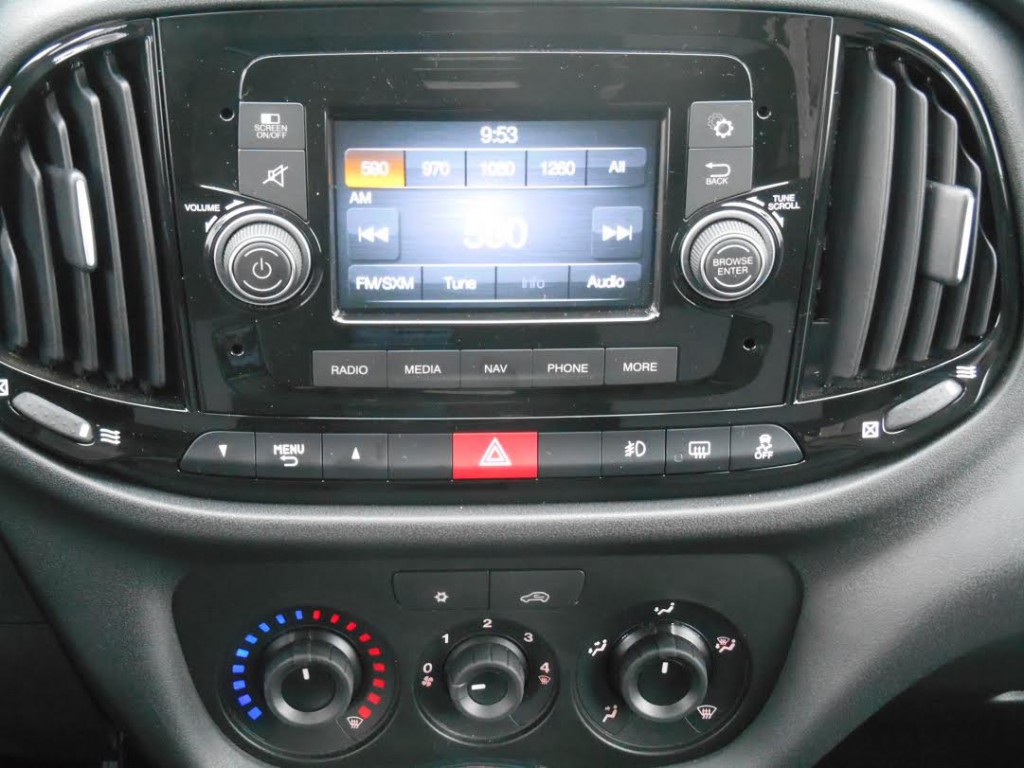 Audio and climate controls are easy to use, though the latter are mounted low, a bit out of easy reach.

The ProMaster City is offered in one body length with dual sliding side doors and unique 60/40 split rear doors; the larger one opens first and hinges on the driver’s side, which Ram says allows easier access to cargo and a more direct path to the curb side. They have “stops” at a 90-degree opening, but can be opened as far as 180 degrees. Cargo versions are offered with steel side and back “windows,” steel side windows and glass back windows, or glass side and back windows. Note, however, that the glass side windows are only in the sliding side doors; the rear quarter panels are always steel. Base and SLT trim levels of both the cargo van and a 5-seat passenger van are offered, but the latter is expected to account for only about 20 percent of sales. The base cargo van starts at $24,125 including destination, while the passenger version (which includes a 3-passenger rear seat flanked by interior trim panels and 2nd-row curtain side airbags) is just $100 more.

The load area of cargo versions measures 87.2 inches long, 60.4 inches wide (48.4 at the wheelwells), and 51.4 inches high, and includes 6 tie-down rings in the floor; passenger versions have about 4 feet of space behind the rear seat. In the cabin, the driver can access a good-size glovebox, an open bin over the glovebox, a center dashtop bin (along with a shallow one on the left side), 2 cupholders (though one is far back on the lower center console), 3 tiny console bins, small map pockets in the doors, and a huge overhead bin that spans the width of the interior.

Interior ambiance is decidedly utilitarian. Hard plastic is the rule, though the pull-down center armrest is padded, and there’s very thin padding on the door armrests. There are two 12-volt outlets on the lower console, along with USB and Aux inputs on the upper console. 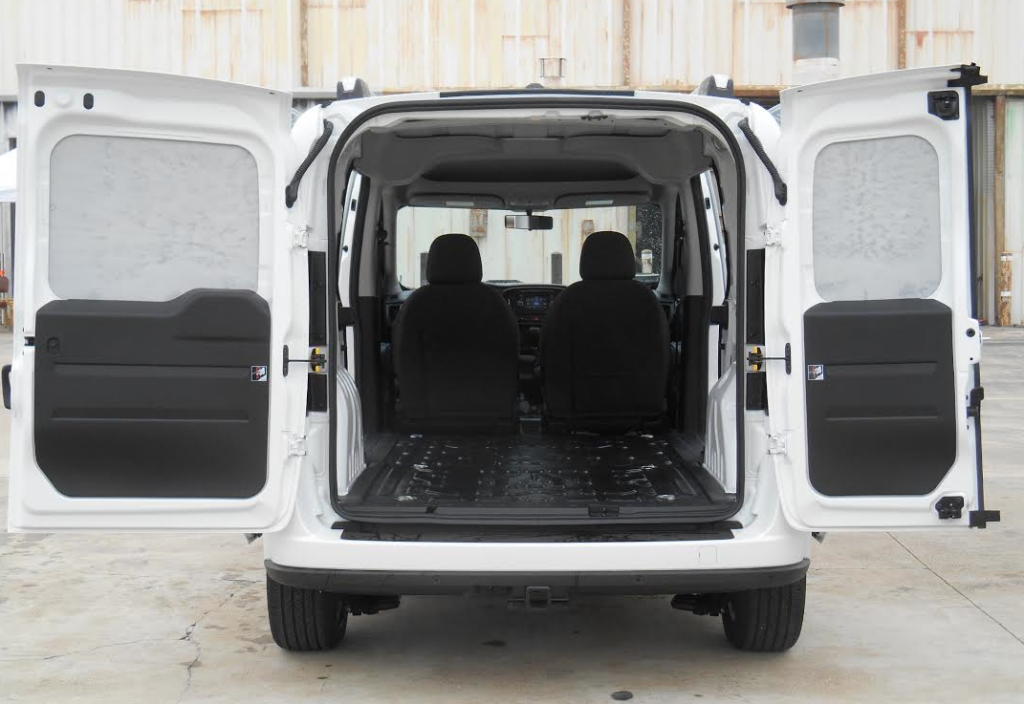 ProMaster City’s rear cargo doors are split 60/40 and can be opened 180 degrees. The larger (left) one opens first, allowing better access to cargo and a straight-line walk to the curb.

As might be expected, there’s vast headroom and decent legroom in the front seats, and we found the seats themselves to be quite comfortable. The standard seat is mounted a bit low, but all models tested had a tilt/telescopic steering wheel, which helped us attain a comfortable driving position. Even better was the optional height-adjustable driver seat, which allows ratcheting it up to a much more commanding position. Either way, however, it was a long reach to rest your elbow on the door top; awkward for normal-size folks, great for “wider” ones. In passenger versions, there’s adequate (not vast) adult legroom in the 2nd row. Audio controls are mounted high, within easy reach, and include a 4-inch touchscreen. Simple 3-dial climate controls are mounted lower, just out of easy reach. One downside we noticed is that the speedometer is small and set into a dark corner of the instrument panel, making it hard to read at a glance. Available amenities include a rearview camera and rear obstacle detection. Both help make up for a rather poor (or non-existent) view rearward when backing and are highly recommended. Visibility to the front corners is fairly good, with visibility to the sides restricted by thick pillars, even with windows in the sliding doors. Side mirrors have built-in wide-angle lenses, but they’re quite small.

Nissan NV200: The Same, but Different

Our Austin, Texas, drive route didn’t exhibit many Chicago-like potholes, but road irregularities we hit didn’t cause a huge ride disturbance, though road and bump noise is rather high (largely due to the uninsulated rear cargo area). However, there was some jiggling even on relatively smooth pavement, and speed bumps we traversed made the back end hop with a bang; a 600-lb load strapped into the cargo area of one example helped tone that down somewhat.

Acceleration is quite good. Nail the gas from a stop, and the ProMaster City gets a good jump off the line. However, we noticed a slight sag in full-throttle acceleration about 10 feet from the start, which was likely due to the engine overpowering the front wheels and the traction control kicking in to cut power. This was a bit more noticeable when towing a 1500-lb load, which otherwise the ProMaster City pulled with ease. We also noticed that, accelerating out of (typical city-like) low-speed turns, there was sometimes a hesitation in power delivery. In most cases, the transmission kicked down fairly quickly for passing, very helpful in the urban slog.

Just in the past couple of years, competition in the compact-cargo segment has really heated up. Besides the aforementioned Ram C/V (which will continue to be available for a short time), Nissan came out with the NV200, a lower, longer competitor to the shorter, taller Transit Connect. Since then, the Transit Connect has itself been redesigned into the “longer, lower” mold, which is also what’s used for the ProMaster City. Furthermore, Chevrolet is set to jump in with its own entry, which will essentially be a “badge engineered” version of Nissan’s NV200.

As a result, buyers now have four (and depending on timing, possibly five) compact cargo vans from which to choose. Which one is best for them may depend upon how it’s going to be used, but one thing is clear: Ram now has a strong entry in the class that is well worth a spot on your shopping list.