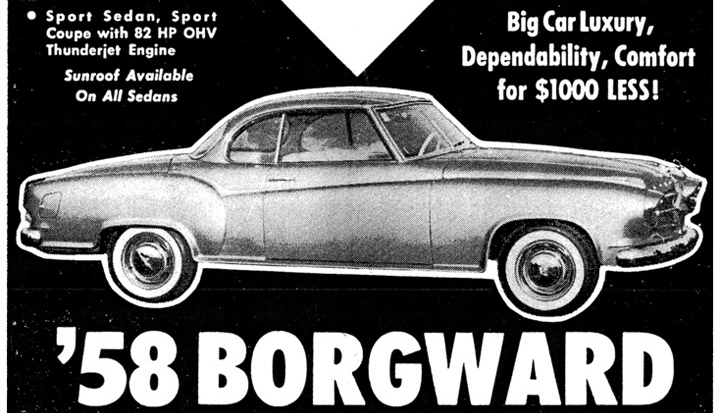 Fifties America must have been wonderful if you were interested in unusual cars, especially unusual imported cars. Flip through old back issues of most any enthusiast-oriented car magazine from the mid- to late Fifties and you’ll come across ads for countless imports. Fiat, Renault, Opel, Mercedes-Benz, and, of course, Volkswagen are names that are still familiar today.

Look a little closer and you’ll see some not-so-familiar brands, too. Panhard, DKW, and Borgward are three that come to mind. Back in those pre-emission-standard days, it must not have been too difficult to start importing cars and set them loose on American roads. Keeping them running and ensuring a supply of spare parts was more difficult, but that’s another story for another day.

Here’s one of my favorite import car ads from the era. It’s for the ’58 Borgward that, according to the copywriter, was “Sweeping the Nation.” How could it not based on this ad?

Add a couple more qualifiers and the reader would need a magnifying glass. It’s also an interesting marketing tactic to never state the name of the actual car model. Borgward was the brand; the model name was Isabella.

In all seriousness, from what I’ve read the Borgward Isabella was a well-respected car in its day. Unfortunately, the Bremen-based company was liquidated in the early Sixties.

The Return of Borgward